Most moths have quite dull coloring when compared with their butterfly relatives, though some do have striking and extraordinary patterns or coloring on their wings. Moths themselves tend not to be much of a nuisance, but their larvae, also known as caterpillars, can present significant problems. The larvae of moths have differing diets depending on the type, with some feeding on textiles, and others feeding on live plants.

Some types of moth larvae are considered invasive pests, able to destroy fields of crops in short periods of time. If you have spotted moths in your garden, you may be wondering what type they are and if they are going to present your plants with an issue. Read on to discover some of the most common types of moths found today. 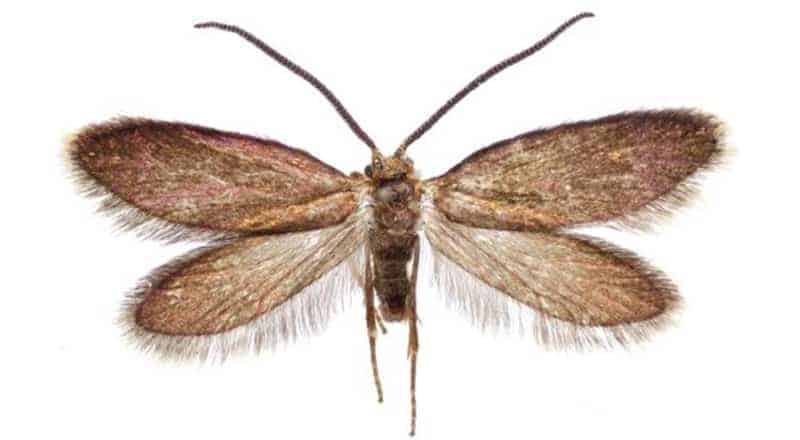 This moth is commonly found throughout the eastern US and southeastern Canada. Their habitat is typically swampy or boggy marshland, and they prefer to live in the shade. Despite their name, they do not actually eat moss, but instead, feed on a moss-like plant called liverworts. They are medium brown with some flashings of pale brown. 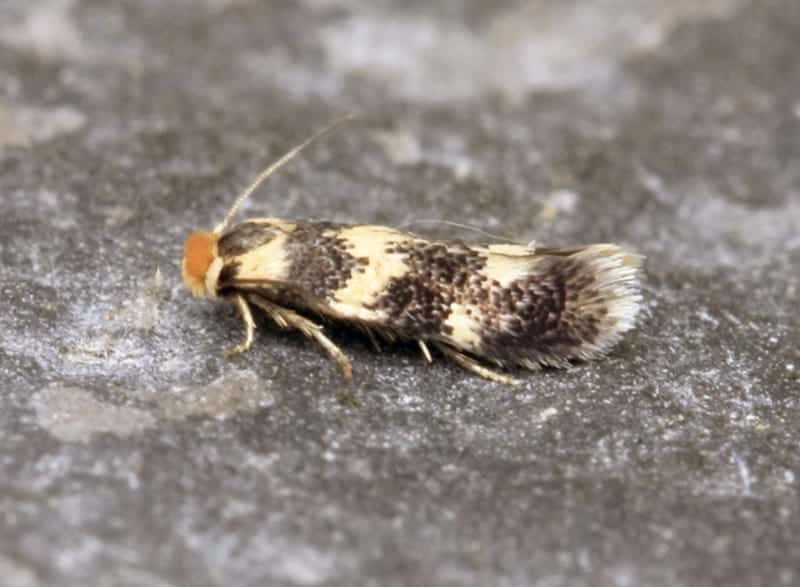 This moth can be found throughout the eastern US, and some areas across Europe, including Scandinavia, the UK, and Italy. Its wingspan is between 0.2 and 0.4 inches and is mostly black and cream in color. 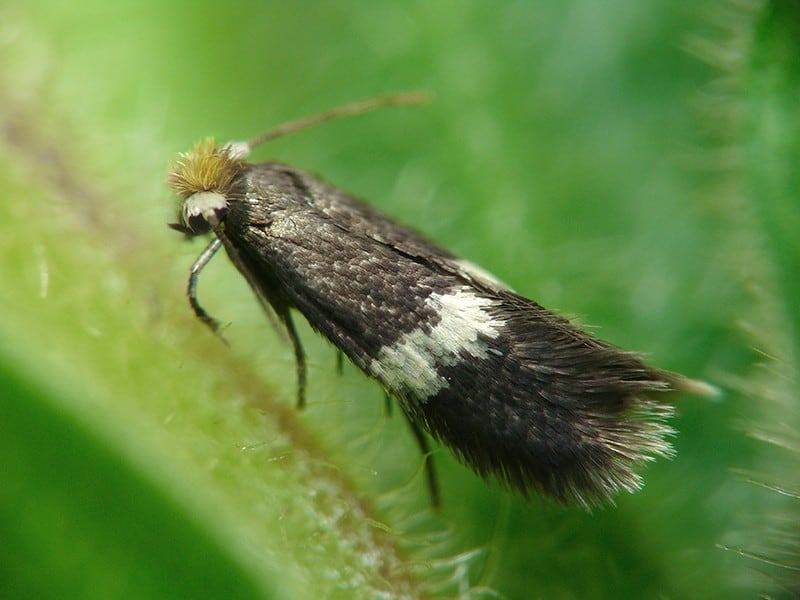 These moths mine through leaves, leaving a blotch on the leaf with a dark spot in the center where larvae can be found. They have gray forewings with cream markings and pale gray forewings. The males can easily be distinguished from females as they have different colored heads; males have black heads, while females have yellow-orange.

These moths feast on various types of maple trees, and can be found throughout southeastern Canada and mid to eastern regions of the US. It has an orange head, and forewings are a startling metallic blue-green.

This brown speckled moth feeds on dried food products such as rice, seeds, and grains. It gets its name from the fact that it likes to feed on dried tobacco leaves, and is considered a frustrating pest in some areas because of this. It is widespread across the globe, being found throughout North America, South America, Asia, Europe, Africa, and Australia. 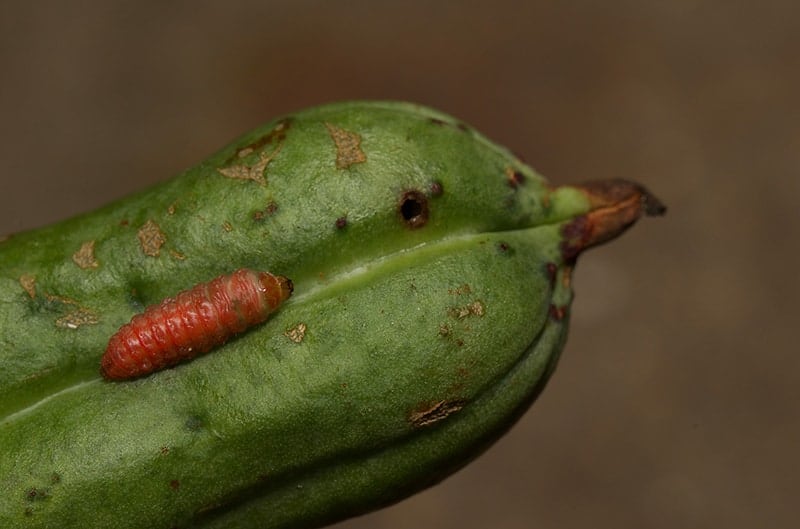 These moths can be found throughout the US, as well as southern Canada, in any areas where yucca plants grow. They are pale-colored moths, with creamy white forewings sometimes flushed with tan. 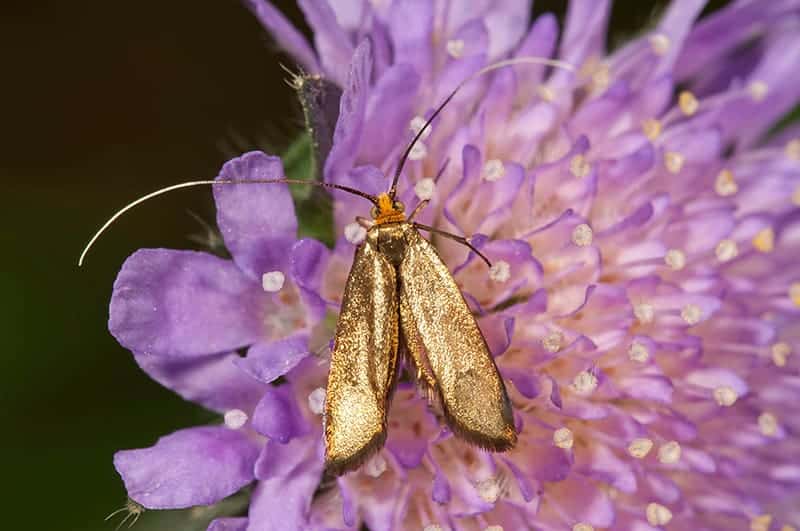 These moths are common throughout the US, especially in southern states. They can also be found in milder climates of Canada. They have some metallic markings on their wings, and are diurnal, partaking in most of their activity during the day and resting at night. 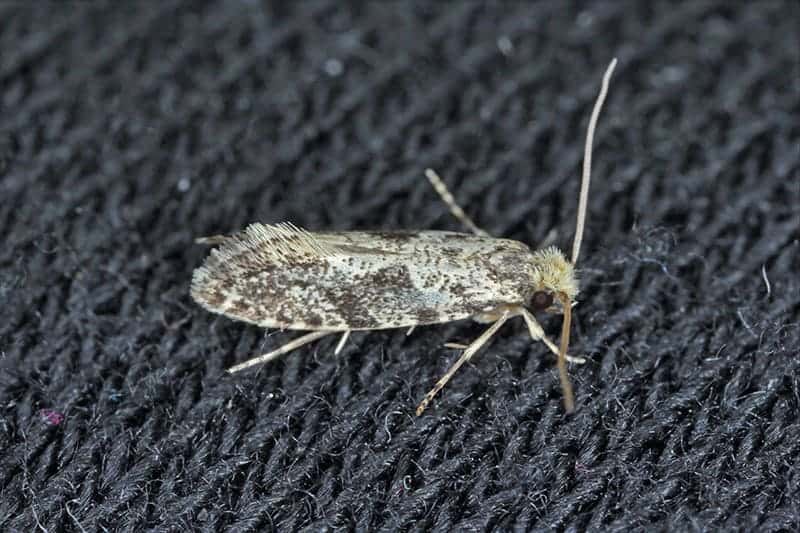 This is a widespread moth, commonly found throughout Europe, Asia, and Australia. It is also known as the ‘corn moth,’ as it likes to feed on corn and grain products. Its penchant for these types of stored food means it is frequently found in food transportation vehicles, and easily gets moved to other locations. 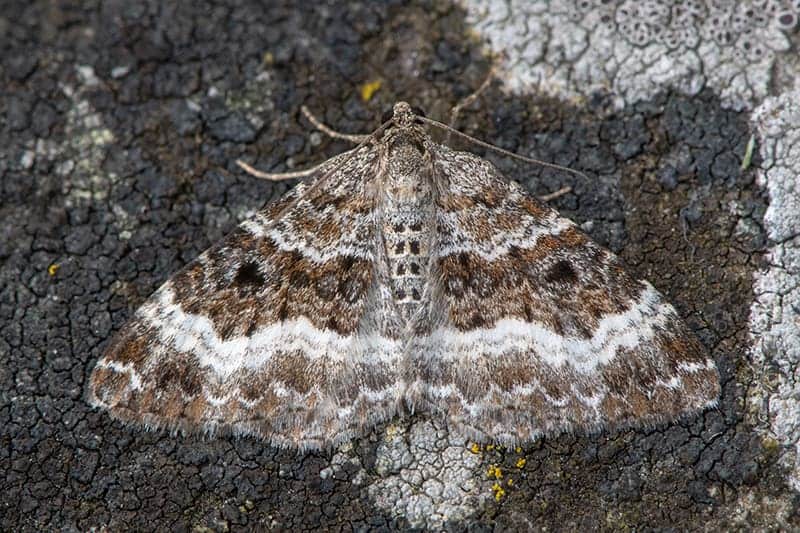 These moths are also known as tapestry moths and feed on naturally fibrous materials such as fur, feathers, and animal skin. They commonly frequent bird’s nests where they will find plenty of these types of materials. They can be found across the world, typically taking flight from June to September, depending on climate. 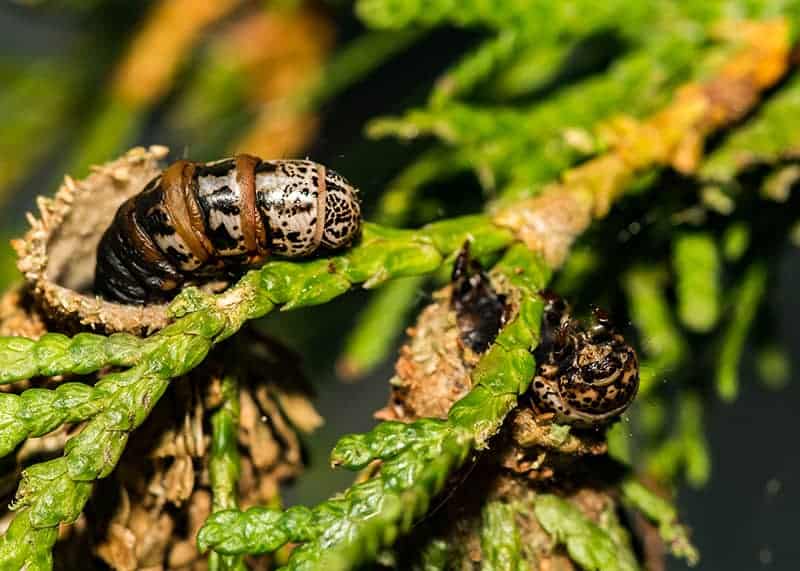 This moth is common throughout the US, thriving, especially in temperate climates of the southern states. In its larval stage, these insects are considered serious pests. They are aggressive feeders, feasting on around 50 different species of evergreen and deciduous trees and shrubs. The adult moths have an appearance similar to a bee, with a chunky and fluffy body. 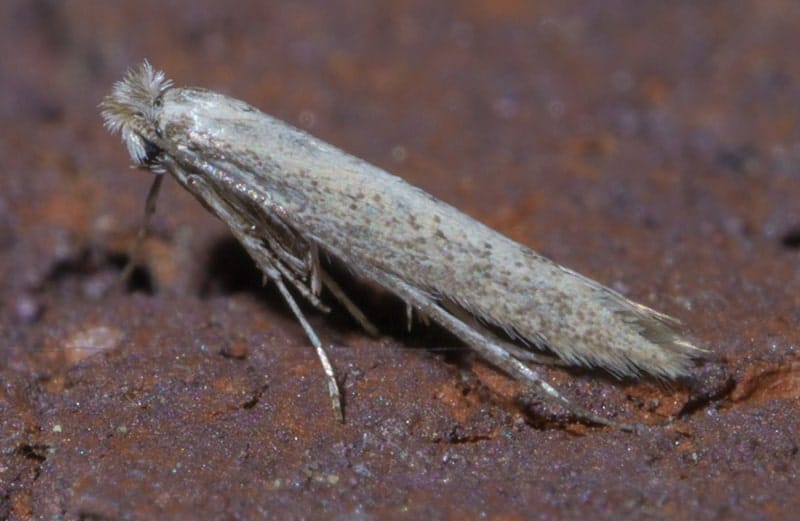 This widely distributed moth has been recorded throughout Europe, Asia, North and South America, Australia, and Africa. It mines the foliage of host plants, thought pupation occurs outside the leaf, without a cocoon. 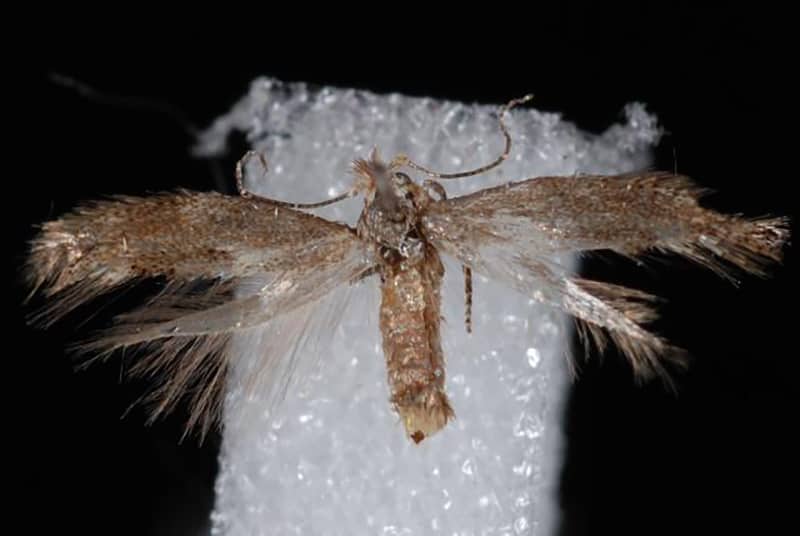 These moths are found throughout southern Canada and much of the US, though more recently they have been discovered in parts of Europe, including Belgium, Germany, and Holland. They feed on oak trees, almost completely destroying the foliage. They are mostly varying shades of mottled brown. 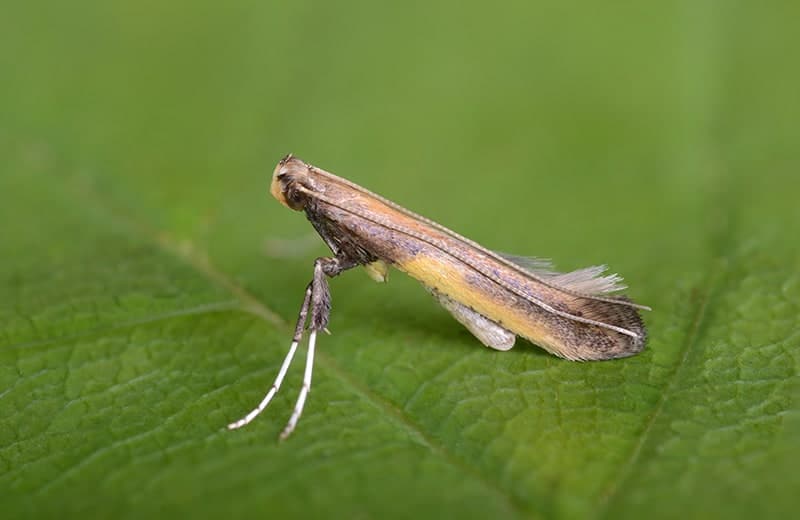 These distinctive looking moths are native to Japan, but were transported to the Netherlands via imported plants, and can now be found across the world, occurring wherever there are Azaleas growing. The larvae of these moths mine azalea leaves and then roll them up into a cone.

The larvae of this moth feed on cherry trees, forming whitish mines on the leaves. It can be found throughout southeast Canada and the western United States.

These dark gray moths have mottled cream patches on their wings. They can be found throughout the southwestern US, where they are considered to be native. They feed on the peel of citrus crops, and though the markings they leave are purely cosmetic, they render the fruit useless for selling. In Arizona, California, Cuba, and Mexico, there have been outbreaks of these moths which have had devastating economic impacts, and are now considered a dangerous pest. (University of Florida)

The larvae of these moths feed on poplar trees, creating mines on the underside of the foliage. They are small moths, which can be found from western Canada to the eastern US. 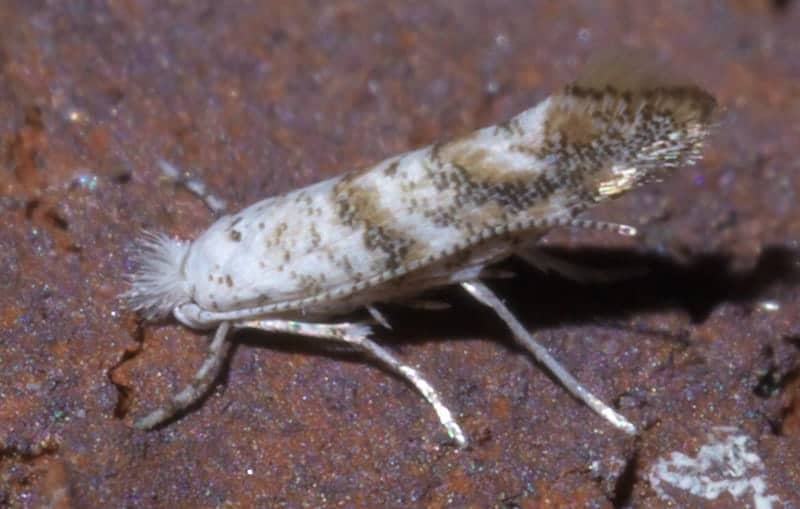 These mottled cream and brown moths can be found throughout North America. The larvae feed on oak trees and are particularly common on white oak trees more so than red oak trees. They leave behind large brown patches on the leaves they mine.

This gray-brown moth is found only in California in the US, though it is suspected to be a native tropical species as it only feeds on buddleia, a tropical flowering plant. The larvae of these moths skeletonize buddleia leaves before mining into the buds. They are on wing for a large portion of the year, from February to December.

These moths are found throughout northern Mexico and the central and southwest United States. They have dark gray wings with cream-colored scales. The larvae feed on the foliage of mahogany trees and take flight from April to September.

This moth is native to Japan, where it was first described in 1932. It has since been introduced to the US and can be found throughout the southern US. The larvae of these moths feed on Asian plum trees. 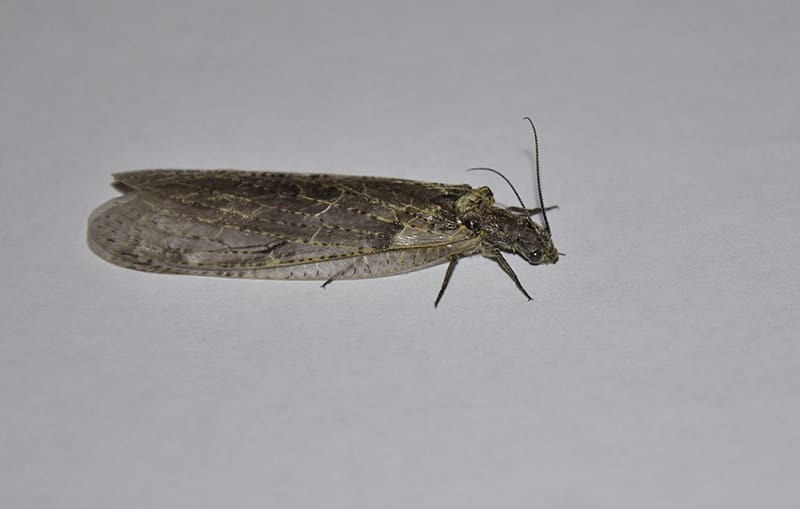 These moths are native to Asia but have been found across the world since the mid-1800’s, and are now one of the most commonly seen moths. They take flight all year round but are most abundant during summer, where they can usually be found inside homes. They feed on dead organic matter such as dead organisms and fecal excretions, hiding in cracks such as behind skirting boards and furniture. 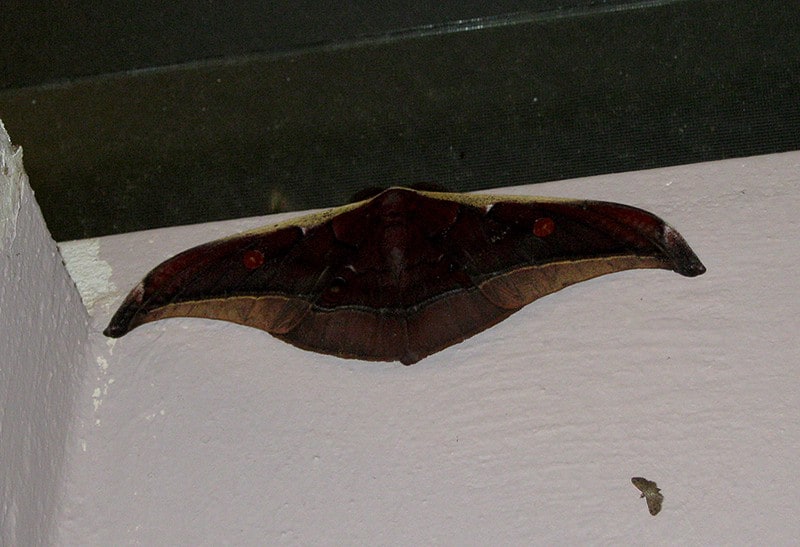 The larvae of this moth produce tussar silk and exquisite silk, which has a glossy finish, is naturally stain-resistant, and becomes better with age. For 600 years, the silk of these larvae was exclusively reserved for use by members of the royal families of Assam in northern India, hence the name ‘Assam silkmoth.’ 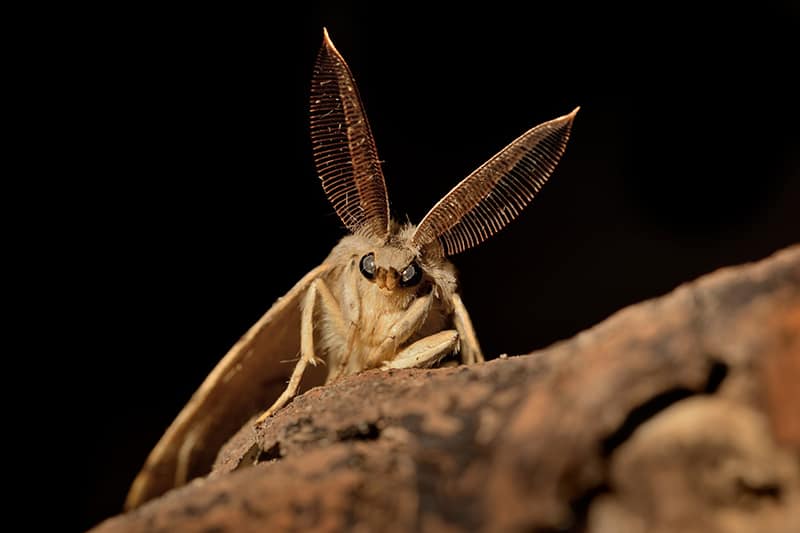 These moths are native to western Europe, but have since traveled across other regions of Europe and have also been introduced to North America. They are now considered an invasive pest in these regions, where biological controls have been put in place to try to decrease their numbers. 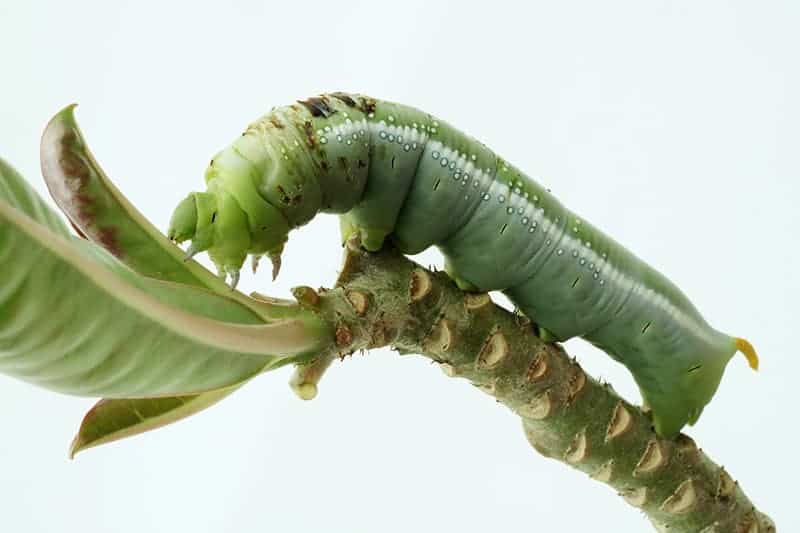 This Asian native is also commonly known as the asparagus fern caterpillar, and is now widespread across the globe. It is a common invasive pest known to completely defoliate numerous plants, including beets, asparagus, beans, potatoes, tomatoes, cereals, and lettuces. The adult moth is called the small mottled willow moth. 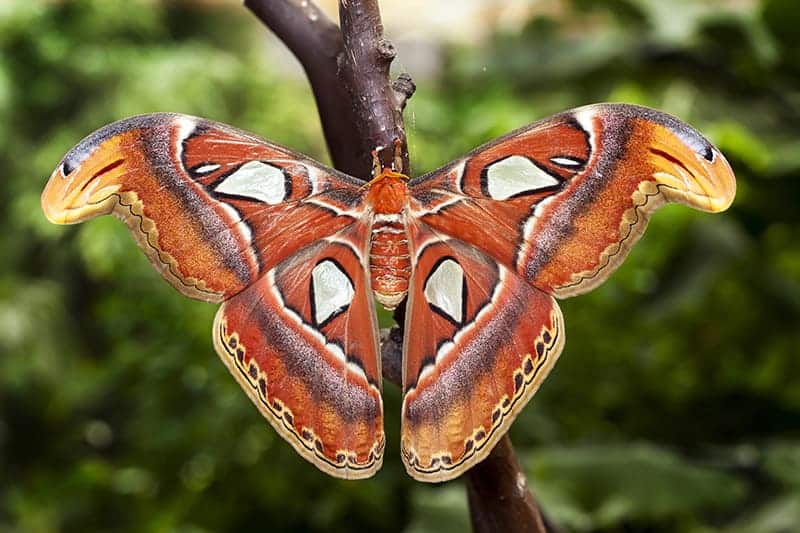 This moth is considered to be one of the largest in the world, with a wingspan of up to 9.4 inches. The females tend to be bigger, both in size and weight, than the males. These moths only live for around two weeks, with flight reserved for special occasions as it takes a considerable amount of energy. It is endemic to Asia. 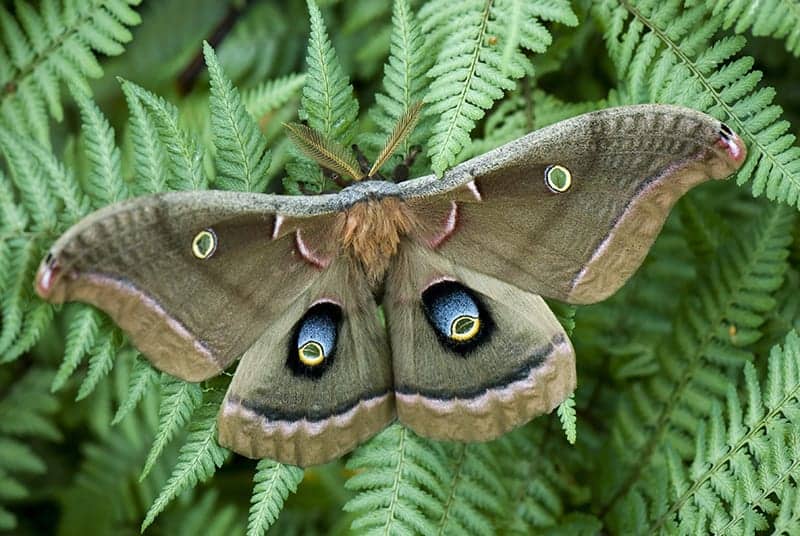 These moths are native to North America, where they are widespread. They are large insects, with a typical wingspan of around six inches. They are tan in color, with various brown and purple markings on its wings. The larvae are voracious eaters, feeding on trees including oak, birch, willow, beech, walnut, and maple. 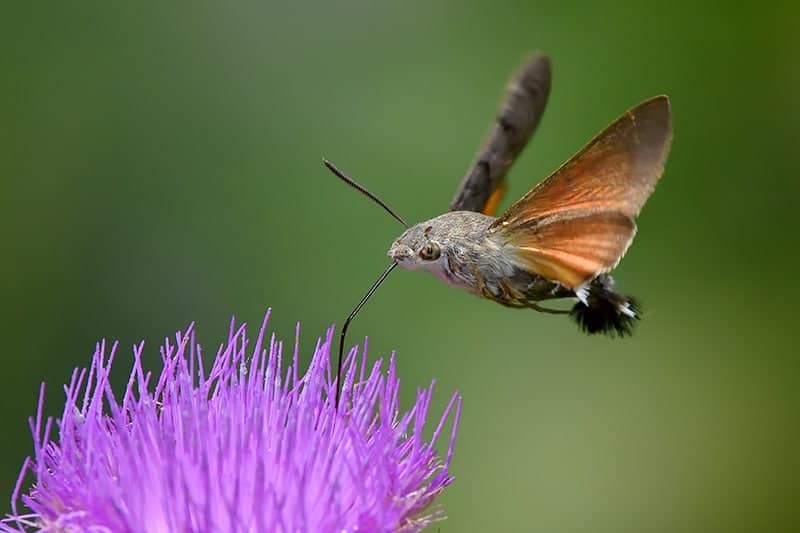 These moths bear a strong resemblance to hummingbirds and are found throughout warmer climates, including Spain, Portugal, and Africa. They are attractive moths, and as adults, they have orange hindwings which are edged in black, and brown and black forewings. 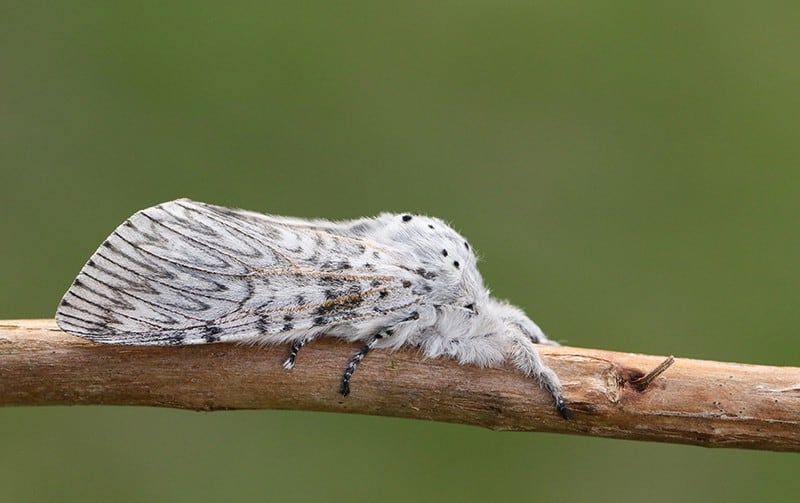 These moths are found throughout Europe, Asia, and Africa. They prefer woodland habitats, and their larvae commonly feed on poplar and willow trees. These moths have a very unusual look, with gray and white marbled wings. They have a wingspan of around three inches, and have fluffy bodies which resemble cats, leading to the common name of ‘puss moth.’ 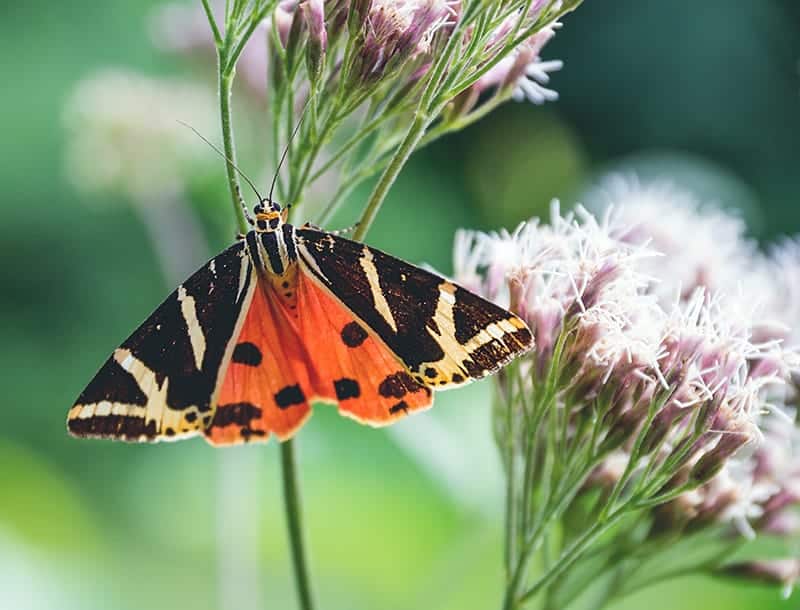 These moths can be found throughout Europe, but have become notably more widespread in the UK over the last hundred years. They have bright orange wings with small black markings and a typical wingspan of a little over two inches. 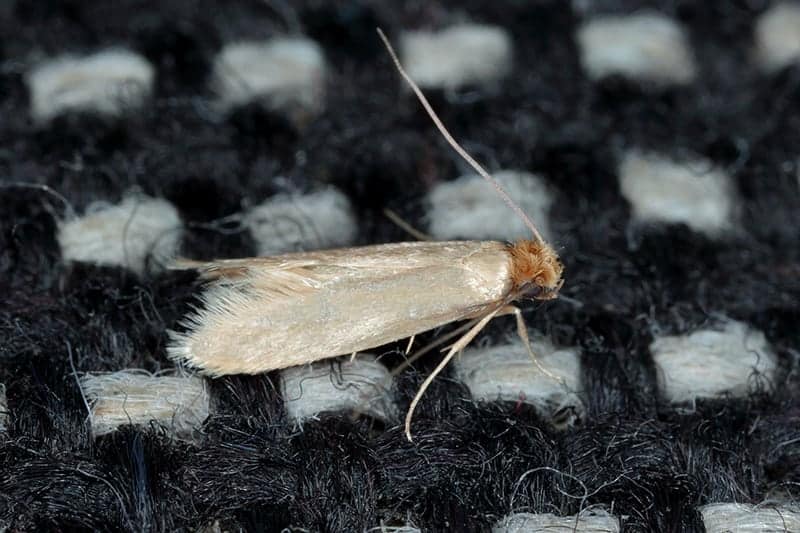 These moths are widespread across the world and are one of the most commonly found moths. The larvae of these moths are considered a serious pest, as they feed on natural fibers such as wool, silk, fur, and cotton. They will also feed on synthetic fibers if they are mixed with natural fibers. The moths commonly find their way into homes and will live in wardrobes and attics where clothes are stored, wreaking havoc by making holes in the fabrics. They will also feed on stored dried grains and cereals. 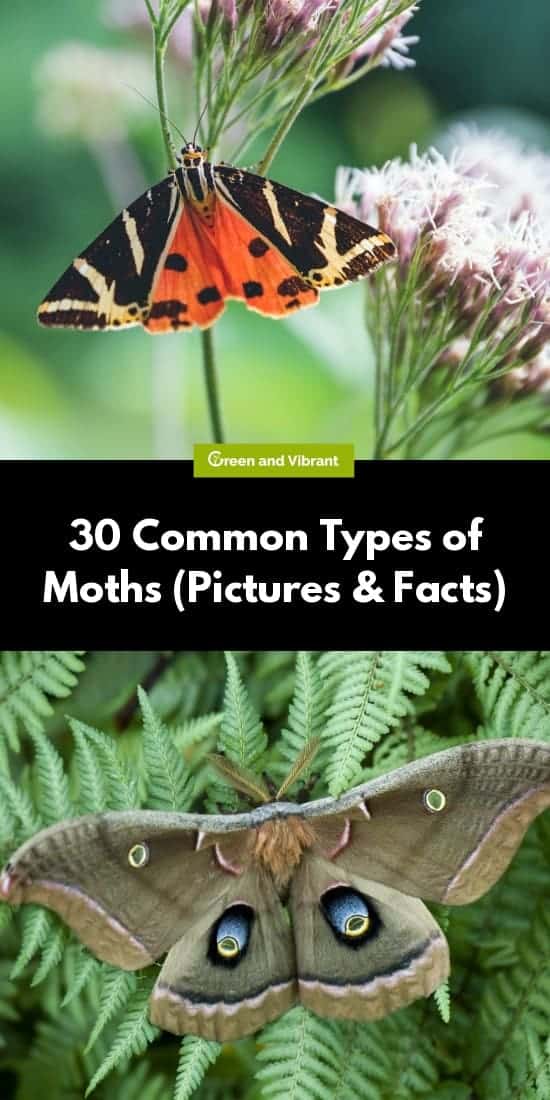