of
Where to buy Mint

Mint plants are perennial herbs that are easy to grow and have many versatile uses. Mint is widely cultivated for its medicinal uses and is popularly used in cooking or for flavoring beverages. Discover some of the most common types of mints and learn about their history and care requirements here. 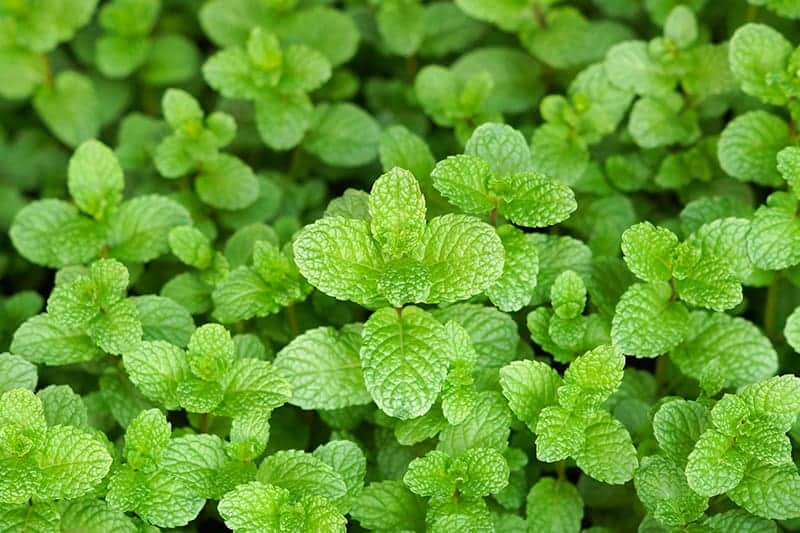 This herb was cultivated in the middle of the 18th century in London, England, as a hybrid between watermint and spearmint. It is now one of the most widely grown types of mint, cultivated for both its medicinal uses and culinary uses. It can be found growing in many regions around the globe and has a tendency to spread rapidly in ideal conditions. One defining feature of all peppermint is the thick square stems that have an upright growth habit.

The leaves of this plant are ovate, with finely serrated margins. The foliage is medium gray-green, though many other cultivars exist with variations in color, such as Variegated Mint that has mottled yellow and green leaves, or Candy Mint, which has red stems. Most types of peppermint have soft, hairy leaves, except for Orange Mint, which is hairless. Peppermint has a fresh and easily recognizable flavor and scent that many people would associate with toothpaste or gum. This type of mint is highly aromatic and can be eaten fresh in salads, or used in cooking to create sauces and soups. It is also popularly used in drinks and cocktails to add a fresh, summery flavor.

Peppermint also has many proven medicinal properties. It can be used as a decongestant for colds and flu symptoms and is also known to help with digestion, being commonly used to help sufferers of IBS to aid with bloating and indigestion. It is also thought to help with blood pressure and type 2 diabetes.

Peppermint will grow almost anywhere that has moist soil and sufficient sunlight. It thrives in full sun, and though it will grow in partial shade, the potency of the mints oils will be decreased in these conditions. Peppermint spreads easily and can become invasive in some instances. Due to this, many people prefer to grow mint in containers to limit its spread and prevent it from taking over flowerbeds. Peppermint grows best in well-draining soils that are kept continuously moist. It is often found growing alongside streams and riverbanks that naturally have moist and well-draining soil. It cannot tolerate dry conditions. 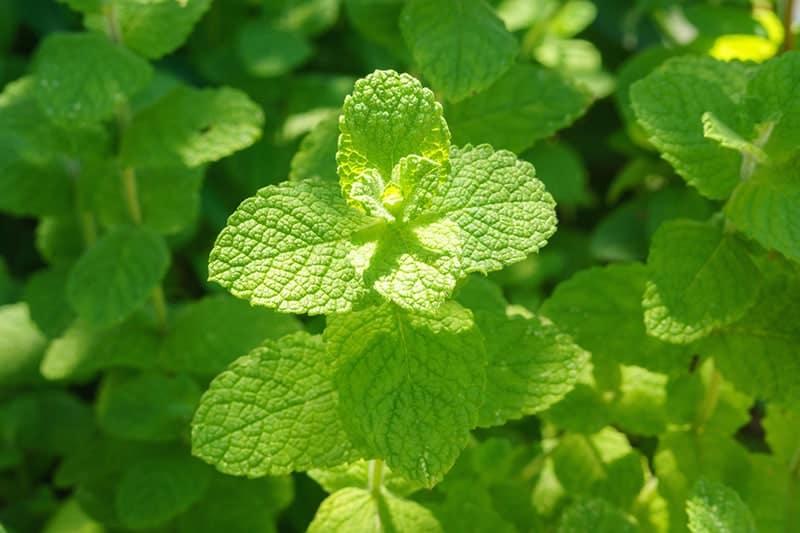 This perennial herb is native to western and southern Europe but has become naturalized in the remaining parts of Europe, especially in damp areas. It was introduced to North America, where it has since become a popularly grown herb used for culinary and medicinal purposes. Apple mint has a fruity mint flavor and is ideally used fresh in an icy pitcher of water to create a refreshing drink. This herb can also be dried and then used to make tea.

The leaves of this plant are pale to medium green in an ovate shape with serrated edges. There are some cultivars of apple mint with different colored leaves, such as Pineapple Mine, which has green leaves with creamy-white margins. The leaves of apple mint are covered in downy hairs and have given rise to the common names’ wooly mint’ and ‘fuzzy mint.’

This plant blooms in mid and late summer, with tiny pink or white flowers arriving on spikes that measure up to three and a half inches long. It is recommended that apple mint be grown in a container as it commonly takes over flower beds or borders and can become invasive. If you are unconcerned about its spread, you can plant it directly in the ground. It is said to improve the flavor of some vegetables, such as tomatoes and broccoli, when planted alongside it, so you may wish to consider growing apple mint in your vegetable garden.

Apple mint thrives in moist to soggy conditions, in full sun. It can grow in partial shade, but this exposure is not preferable. Apple mint will not tolerate dry conditions, and extra care should be taken to ensure soil is kept moist if you are growing mint in a container, as the soil in containers typically dries out more quickly. 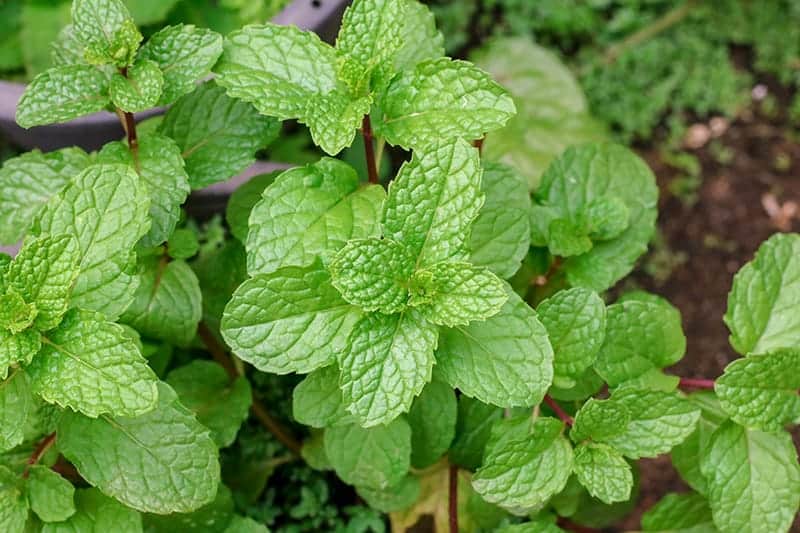 Soil: Any soil that is kept moist

Spearmint is a perennial herb that is native to Europe and Asia. It has become naturalized in many parts of the world, including North and South America and Africa. This is a highly aromatic herb that is widely cultivated for medicinal, culinary, and beauty uses. It can be used fresh, dried, or frozen to flavor tea, cold drinks, and sauces. It is also known to help with digestion and fever. The scented oil in spearmint is also used as an essential oil that goes by the name of ‘oil of spearmint.’ This is frequently used as an ingredient in shampoos, shower gels, and toothpastes.

The foliage of this plant is produced from the square stems typical of mint plants. Leaves are ovate with pointed tips and finely serrated edges, and some are hairy while others are hairless. The pointed tips of the foliage are said to resemble spears, which is where the name ‘spearmint’ comes from. Flowers are produced on upright spikes that stand above the foliage, in shades of lilac and pink.

This is a potentially invasive plant that is popularly grown in containers to limit its spread. It will adapt to a wide range of soil types so long as they are kept moist. Spearmint is known to be tolerant of both clay soil or sandy soil, thriving in either if they are sufficiently wet. This plant thrives in boggy conditions and spreads at a rapid rate when watered freely or grown alongside streams or ponds. It prefers a position of full sun. It can be grown in most climates all year round, but in the coldest regions will need to be brought indoors over winter and grown on a sunny windowsill. 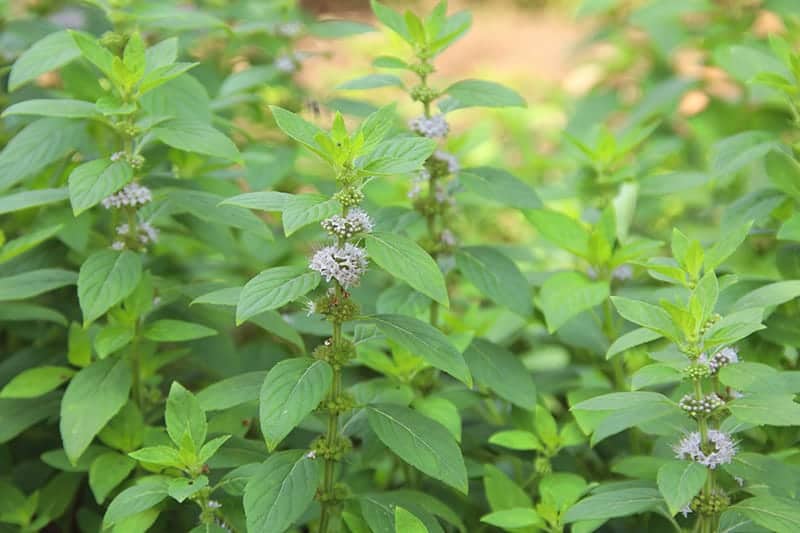 Mature Size: Up to 1 foot tall

This is a perennial herb that is native to the Middle East, Europe, and North Africa. It has a scent very similar to spearmint and was once commonly used as a culinary herb, but is no longer used for this purpose because of its toxic properties. Throughout history, European Pennyroyal has been used as an aid for menstruation and a means of aborting pregnancy. Ancient Greek physicians believed it was an effective method of achieving abortion, and even as recently as the 1900s women have been known to attempt to induce aborting by consuming pennyroyal oil, and sadly a handful of these ended in the deaths of the pregnant mothers. European Pennyroyal has also found popularity when used as a means of pest control. It can be used to treat gastrointestinal problems, headaches, and fevers when used in low doses to avoid toxicity. The consumption of this plant can be fatal to children and should not be given in any form.

It is not in the same family as American Pennyroyal (Hedeoma pulegioides), though it shares many of the same properties. Like most mint plants, European Pennyroyal will spread easily, rooting at any point its stems come into contact with the ground. As a low growing and rapidly spreading plant, it works well as groundcover and can also be used successfully as erosion control. This plant thrives in full sun and can also tolerate partial shade. It will grow in a wide range of soil types, though prefers well-draining and consistently moist soil. 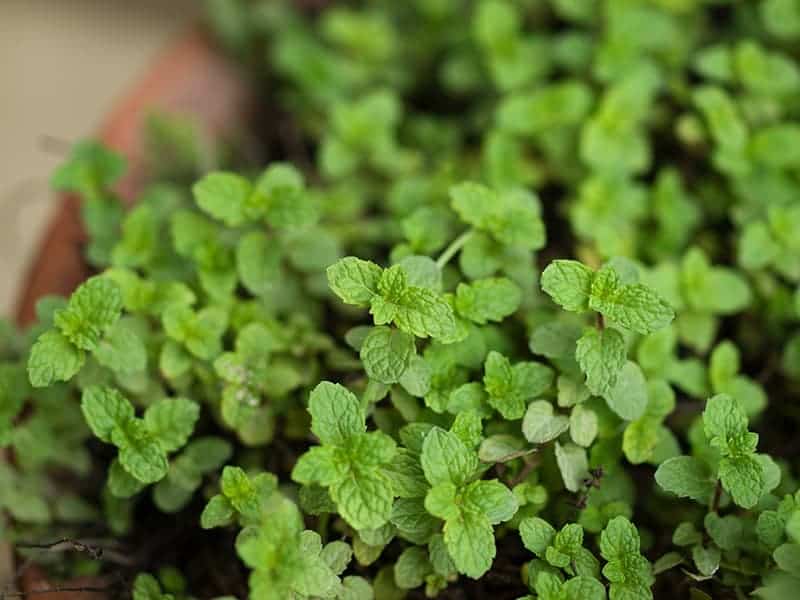 This perennial plant is also known as corn mint and wild mint and is native temperate regions around the world, including North America, Asia, and Europe. This mint is cultivated for its culinary and medicinal uses. It has long been steeped in teas to aid in relieving the symptoms of colds and flus, and it can also be used fresh to flavor salads, soups, and cold drinks. Menthol can be extracted from this plant, which is then used in a variety of products such as mouthwash, cigarettes, chewing gum, medicine, and drinks.

The leaves of this plant are arranged in opposite pairs along square stems. The foliage has coarse hairs and serrated margins. The plant blooms in summer with tiny purple flowers, or occasionally pink or white blooms.

Field mint thrives in full sun. It can tolerate partial shade, notably a few hours of shade during hot summer afternoons in the warmest climates; however, it will not survive in dappled shade, for example, if planted beneath a taller shrub or the canopy of a sparse tree. It has a habit of spreading rapidly and can take over entire gardens in just a few years when grown in moist soil. To prevent this, plant the herb in a container and continue to cut it back. This plant will grow in a wide range of soils but is not best suited to sandy soils that drain too quickly. For best performance, keep this plant in moist or soggy soil. 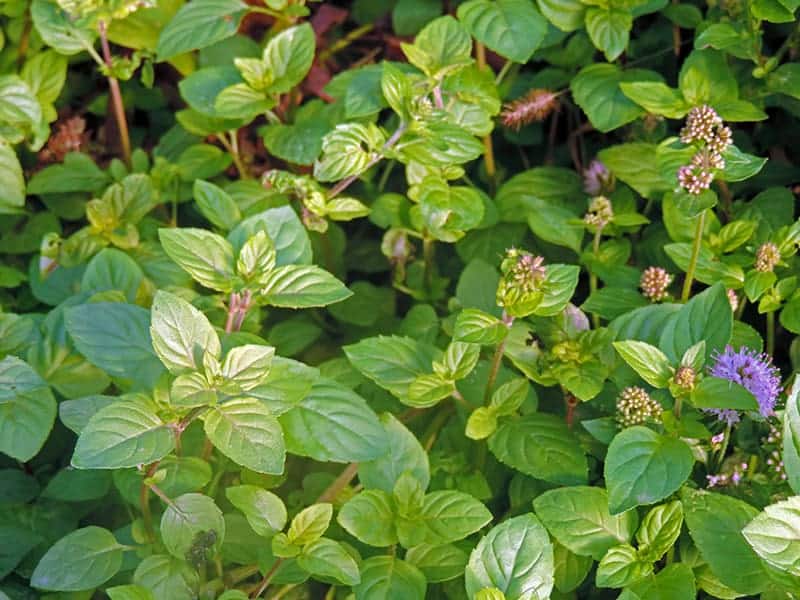 This perennial plant is native to most of Europe, along with some parts of Africa and Asia. It is named water mint due to the fact that it grows naturally in shallow waters and wetlands such as streams, along riverbanks and in storm ditches and thrives in moist and boggy conditions. As a shore plant, water mint is important in providing homes for wildlife and a source of food for animals. It can also be grown as a pest repellant, as it acts as a natural pesticide. Flies, insects, and some rodents are known to stay away from water mint as they dislike the smell.

Water mint can also be used for flavoring drinks and dishes in the same way as many other types of culinary mint. It has a refreshing flavor that can be enjoyed in teas or cold drinks, and it can also be dried or frozen for use at a later date. Water mint is also known for its medicinal properties, for instance, soothing sore muscles and for cleaning out cuts and grazes.

This plant can be invasive in ideal conditions, notably when grown in full sun and moist or boggy soils. It is more tolerant of partial shade than most other types of mint. It has dark green foliage that is flushed with purple and square red-colored stems. The herb can also be grown as an ornamental plant, especially in ponds, where the stems will stretch out along the surface of the water and dot it with pretty foliage and flowers. The plant blooms in summer, producing tiny flowers in shades of purple, pink and blue.