19 Types of Mosses For Your Garden

Moss is one of the oldest plant species on the planet, and it has a broad and diverse range of types, with over 20,000 different varieties in existence. Though many people who encounter moss in their garden find it a nuisance, typically growing unwanted between gaps in paving or spoiling the look of a lawn, moss actually has many benefits, including use as ground cover, filling out planters, and an alternative to grass.

Moss can be categorized into two groups; pleurocarpous and acrocarpous. Though there are several differences between the two groups, the main one is that pleurocarpous moss has a spreading carpet-like growth habit, while acrocarpous grows upright. 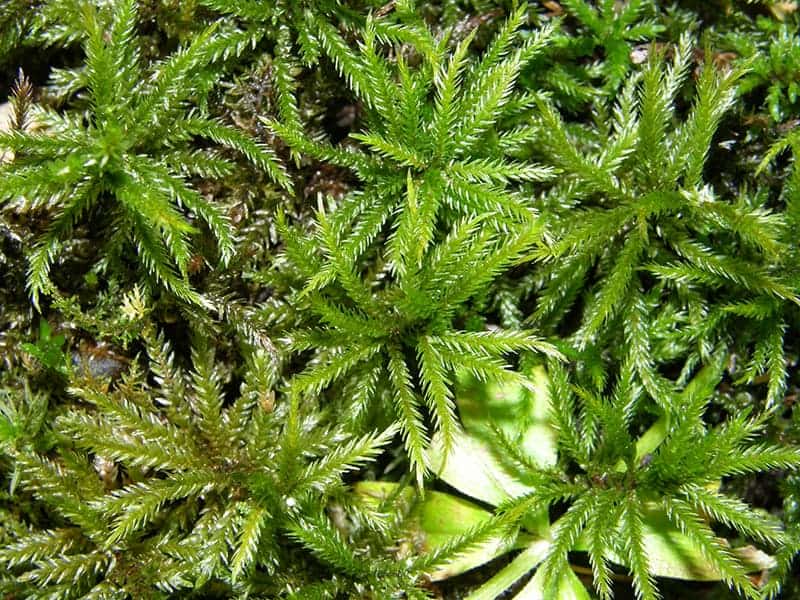 Special Features: Can be used in wreath-making and other decorative crafts

This moss is native to North America and can be found growing widely across the eastern US and eastern Canada. It has a densely branched habit, with primary stems being brown, and secondary stems red, giving the effect of lots of tiny Christmas trees bundled together. The leaves start out pale green and become a darker olive shade with age. This moss is commonly found in woodlands, nature paths, along rocky ground, riverbanks, and alongside streams (Illinois Wildflowers). 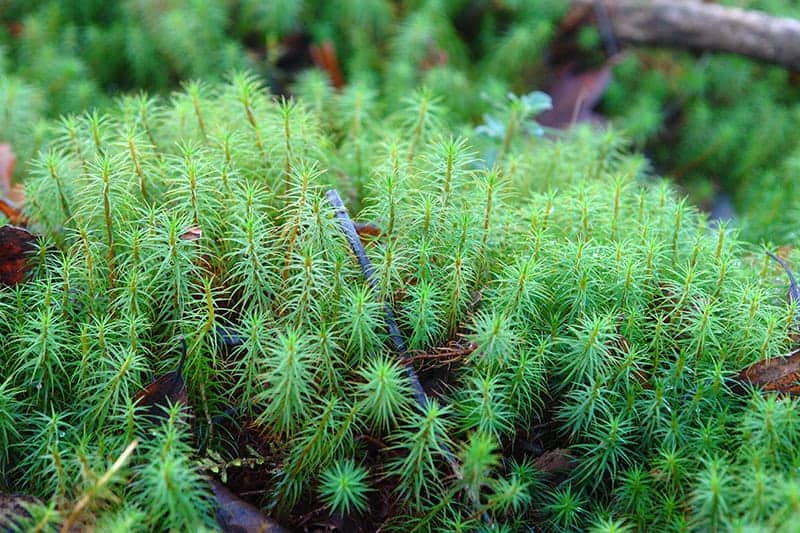 This moss is easy to identify with its long shoots of wiry spiked foliage. Stems are red-brown, and the leaves pale to bright green. Leaves are arranged in such a way that when looked on from above, they look like clusters of tiny stars. This common moss is widespread across the western hemisphere, growing in a broad range of soils and habitats. 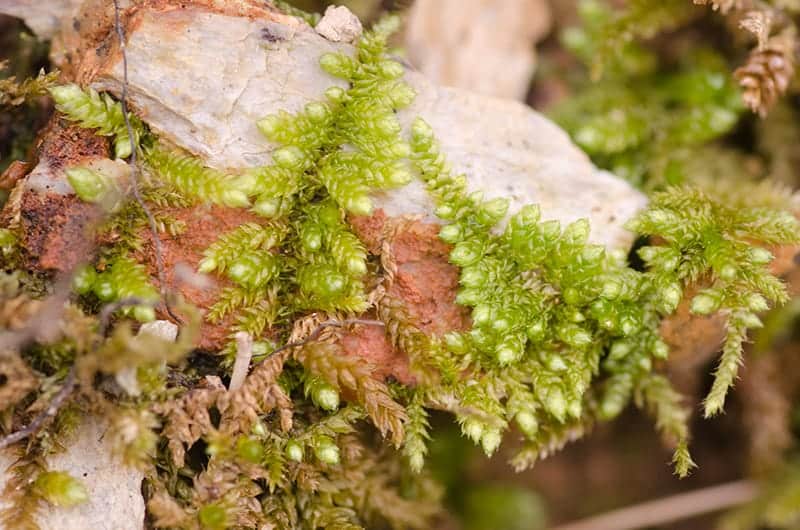 Mature Size: Up to 2 inches tall

This moss forms a dense blanket of cushioned foliage. Stems grow up to 1.5 inches long but are completely hidden by the tightly packed leaves covering them. The tiny overlapping leaves on the blunt stems give the effect of lots of juicy caterpillars. New leaves are bright green, while older leaves are brown. It is commonly found in the US, though in Canada, it is considered a rare species of moss, only being found in Ontario. 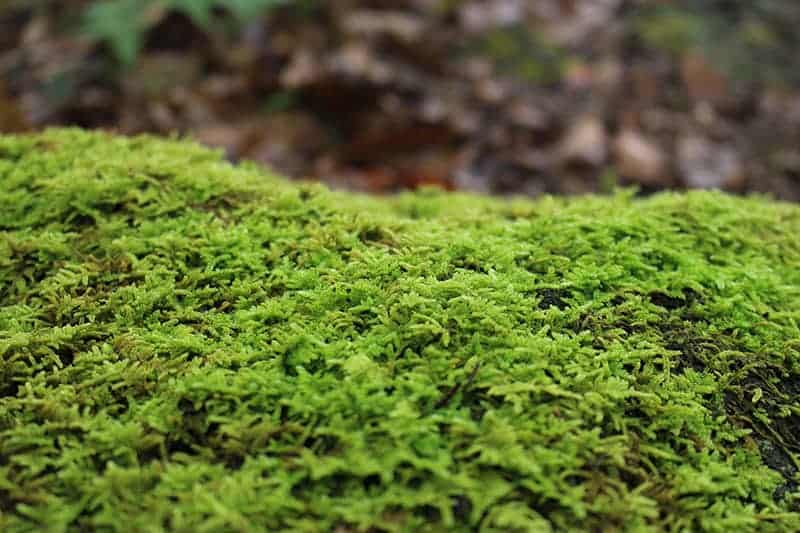 Mature Size: Up to 6 inches tall

This is a widespread moss that is commonly found in grasslands and lawns. Each stem measures up to around five inches long and is sheathed in tiny pale green foliage that has a thick hair-like quality, pointing out in the opposite direction of the red stems. Springy turf moss is also referred to as ‘electrified cat’s tail,’ which is a good way to describe this spiny moss.

This moss is native to South America, though it is widespread in other areas, such as the UK, where it was introduced in 1941. It likes to grow on rotting wood, such as old fence posts and logs, as well as shingle and thatched roofs. It has dark red-brown stems and foliage, which is bright green when young but develops to almost black with age. This moss has a vigorous growth habit and can become invasive in ideal conditions. 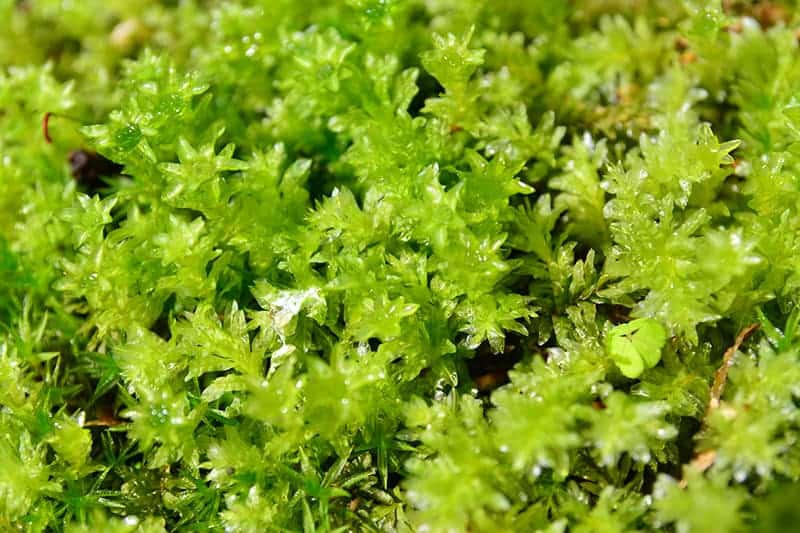 Mature Size: Up to 1.5 inches tall

Special Features: Used by birds to build their nests

This perennial moss has a short life span and is commonly found in North America, Asia, and Africa. It is easily identifiable from the tall stalks it produces, which hover above the base foliage. These are the result of fertile shoots that produce nodding spore-capsules atop of slender brown-orange stalks. Foliage is medium green and has heavily toothed margins. It will not tolerate full sun or high temperatures, preferring cool temperatures and moist habitats. 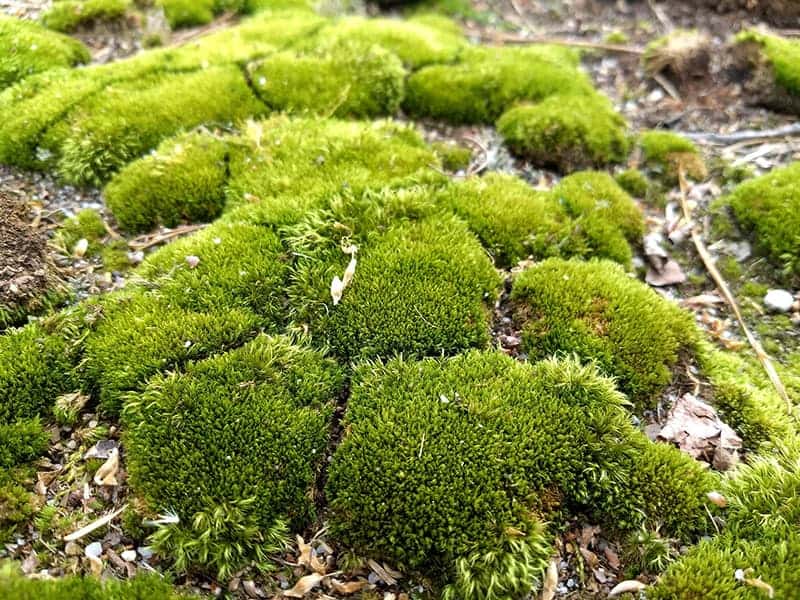 This perennial moss forms large dome-shaped mounds, measuring up to five inches tall and two feet wide. Each ‘cushion’ is made up of a spread of stems that are covered in lance-shaped gray-green leaves. The smooth and feathery foliage gives the moss a plump and soft look. The plant spreads by spores in the wind, generally in autumn and winter. It prefers moist growing conditions but is more tolerant of drought than most other types of moss. 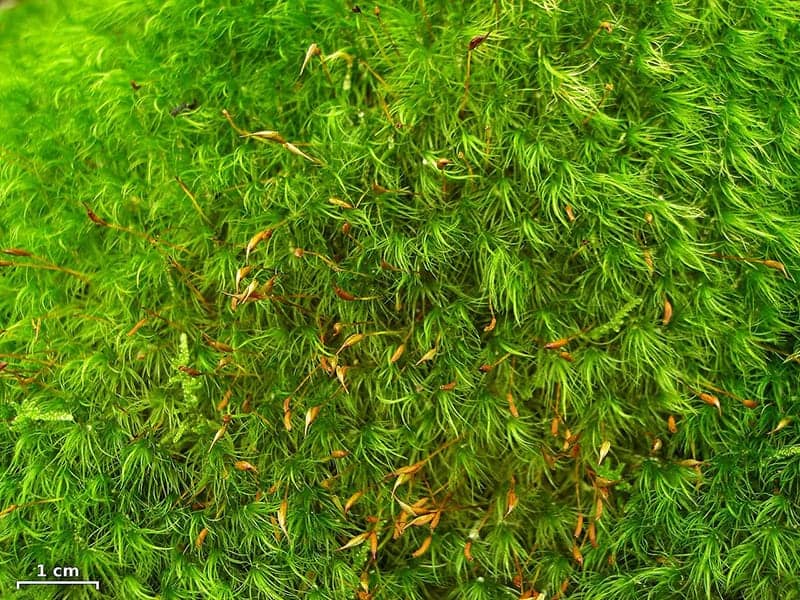 Also known as ‘broom-fork moss,’ this moss is native to North America. It grows in clumps of up to 5 inches tall, forming mounds of cushion-like patches. It produces upright, slender stems that are covered in spear-head shaped leaves, which reach up to the sky. This type of moss is commonly found in woodland habitats, growing on moist soil, tree trunks, rocks, and logs. It won’t fare well in soggy areas, or in full sun. 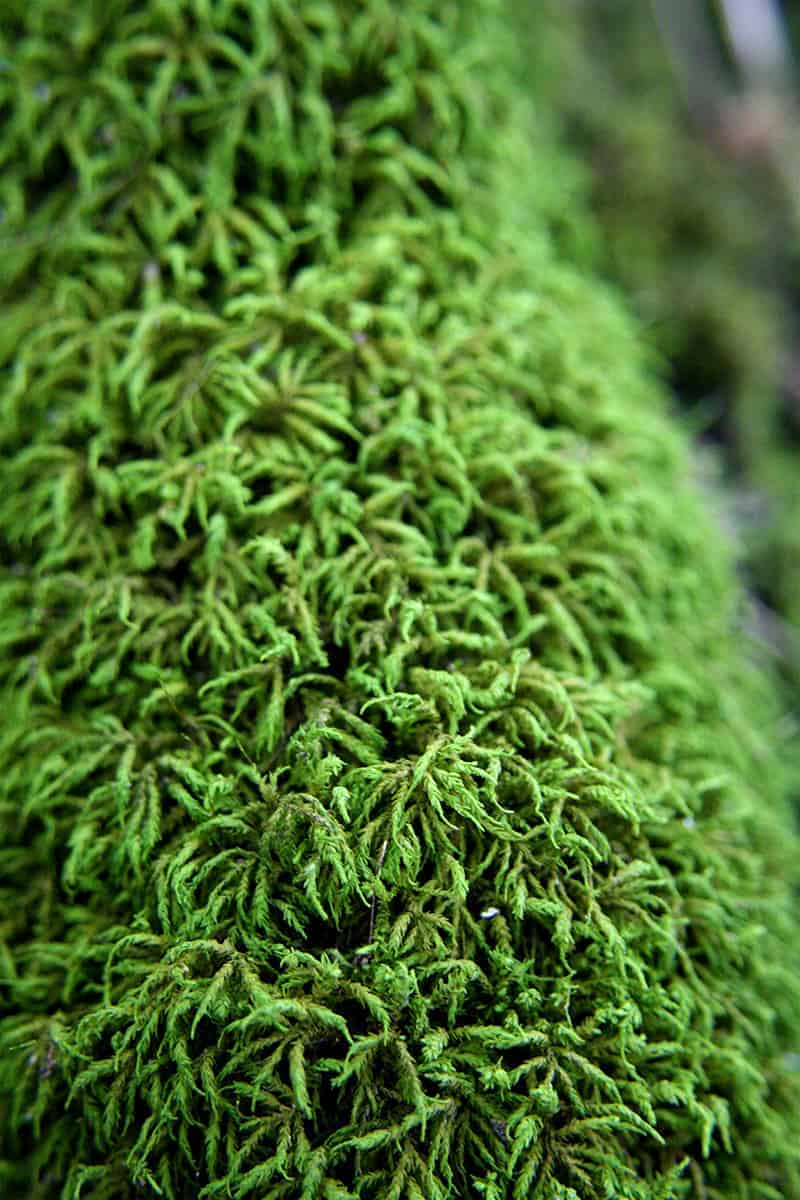 This is a type of feather moss that grows quickly, spreading rapidly sideways. It is commonly found in North America, with its favorite natural habitats being rotten wood, such as felled trees, old logs, and fence posts. It’s a good choice for quickly covering empty space between plants or in a rock garden with a bright and attractive base. Unlike most types of moss, shiny seductive moss enjoys full sun

This moss is widely found in Canada and northern Europe and is also known as ‘ostrich-plume feather moss,’ which gives a good indication of the aesthetics of the moss. It is also known as ‘knight’s plume moss,’ as it was said to resemble the feathers on a knights helmet. The feathery foliage is mid-green in color, with a spreading growth habit that results in dense mats of it covering large areas of forest ground. 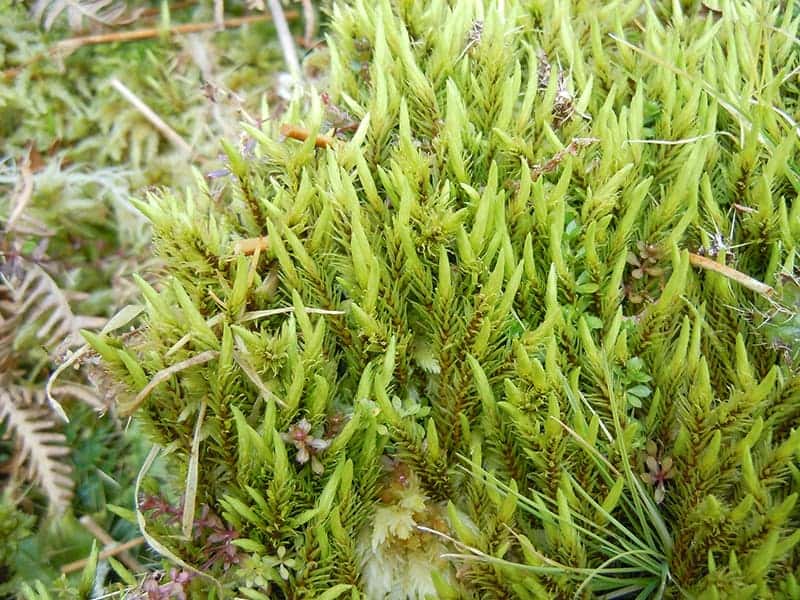 Also known as ‘bog groove moss,’ this type of moss forms extensive collections of tufts which together become a densely matted carpet. It is found across the world in boggy habitats and is frequently found to be the dominant type of moss in wetlands, with a higher rate of incidence than most other wild moss. It has orange-brown stalks and yellow-green fine foliage. It fares best in cool climates and is widespread in Canada. 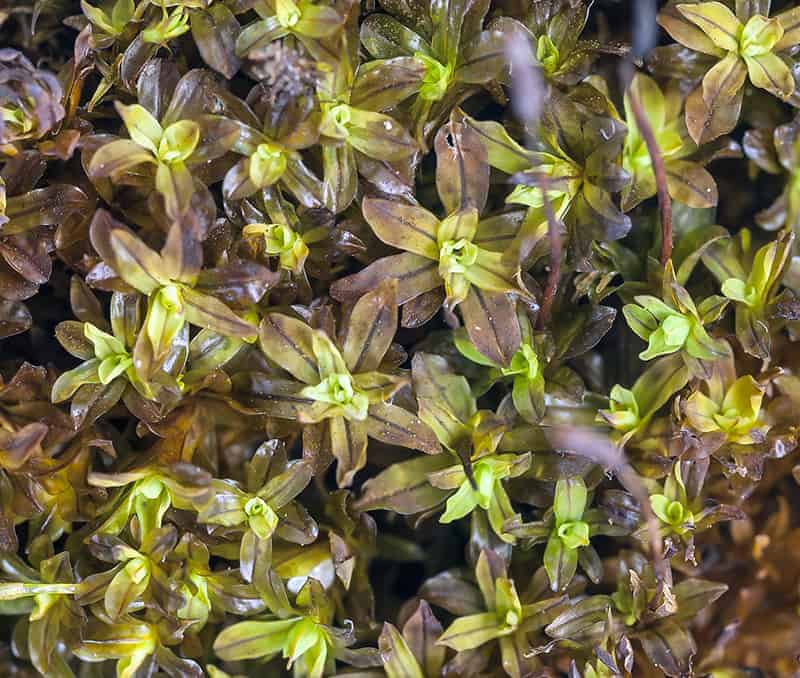 Mature Size: Up to 1 inch tall

This moss has a very decorative look, with small broad leaves packed in circles around the stems so that they look almost like a carpet of tiny green flowers. This moss is predominantly found growing on trees, though it will also grow on moist walls and rocks, and can be seen growing along the side of shaded roads. 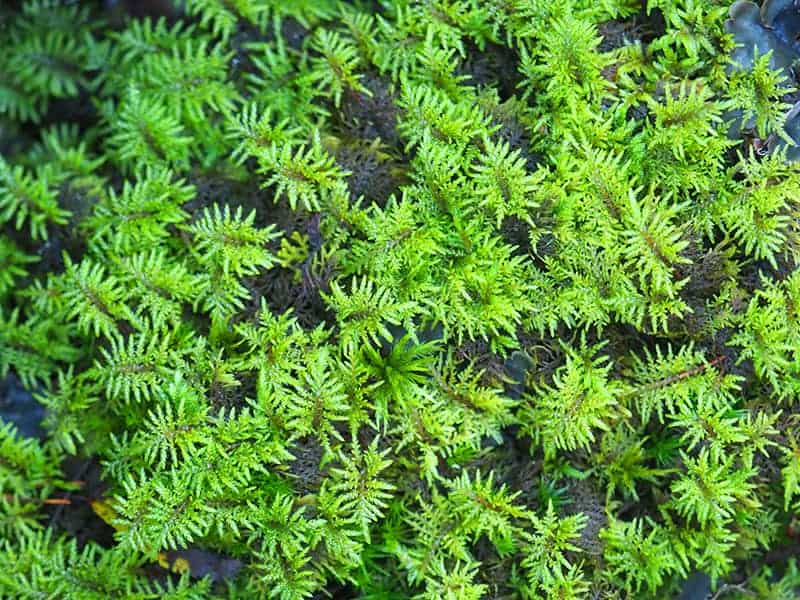 This type of feather moss is widespread across the Northern Hemisphere, preferring cool climates such as Russia, Scotland, and Canada. It has red stems, which can measure up to 8 inches long, with gloss olive green foliage. It has a decorative appeal, like tiny branches of a spruce tree. It has antibacterial properties, and its uses include lining floral displays, as well as filling gaps in the building of log cabins in Canada and Alaska. 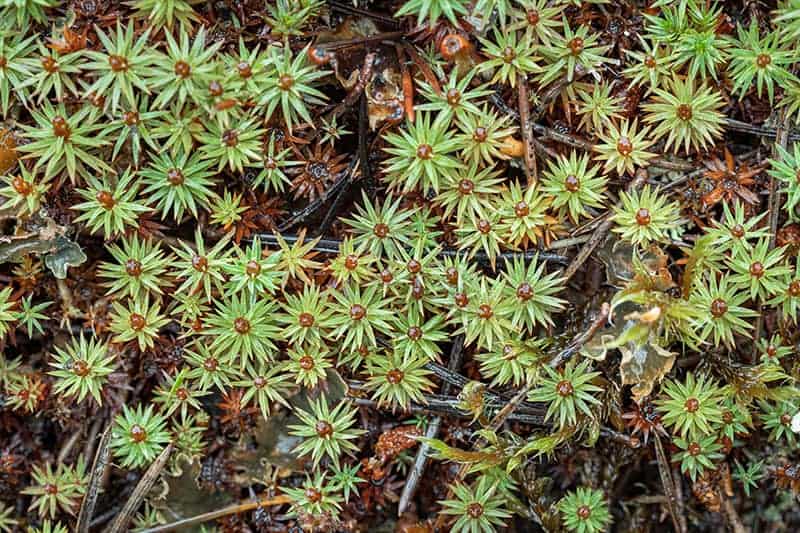 This type of moss grows on every continent on the globe. Unusually for moss, juniper moss prefers dry habitats and is rarely found growing in moist environments, it also grows well in exposed locations, whereas most moss prefers a sheltered habitat. It is widespread and can typically be found growing on dry grasslands, forest footpaths, quarries, and gravel. It has an attractive but unfriendly look to it, with spiky foliage in rosette-like patterns. 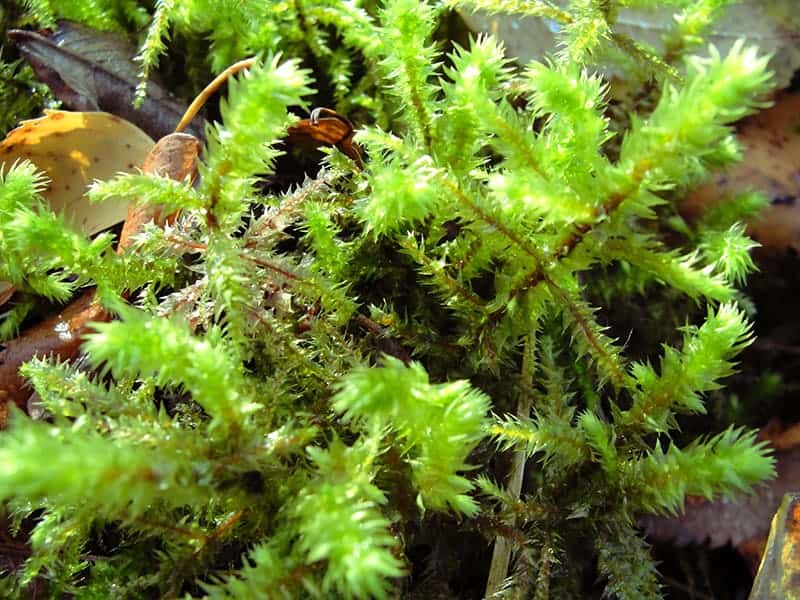 This fuzzy moss grows on long tail-like stems. The common name ‘shaggy moss’ is very appropriate as the moss has an unkempt, messy look to it. Older foliage takes on a brown hue, while newer foliage is bright green. This moss is one of the most commonly found types of moss growing throughout forests in the Pacific Midwest. Its ideal habitat is moist and fertile soil, though it can also be found growing along riverbanks and streams and on trees. 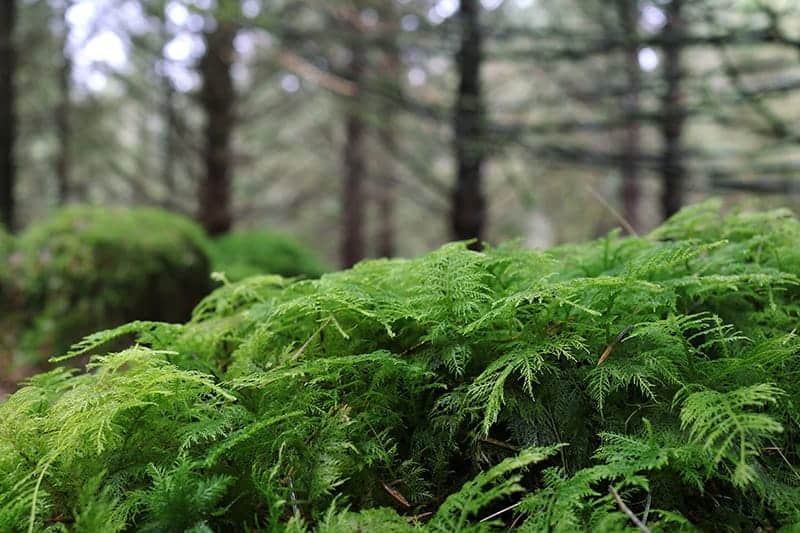 Mature Size: Up to 6 inches tall

This moss has a distinct lacy look. Its foliage is bright yellow-green and reminiscent of a fern. It has dark stems which contrast the leaves. Unlike most types of moss that prefer acidic soil, common tamarisk moss is typically found growing on neutral soils. It grows in dense tufts on damp ground and rotting logs (Woodland Trust). 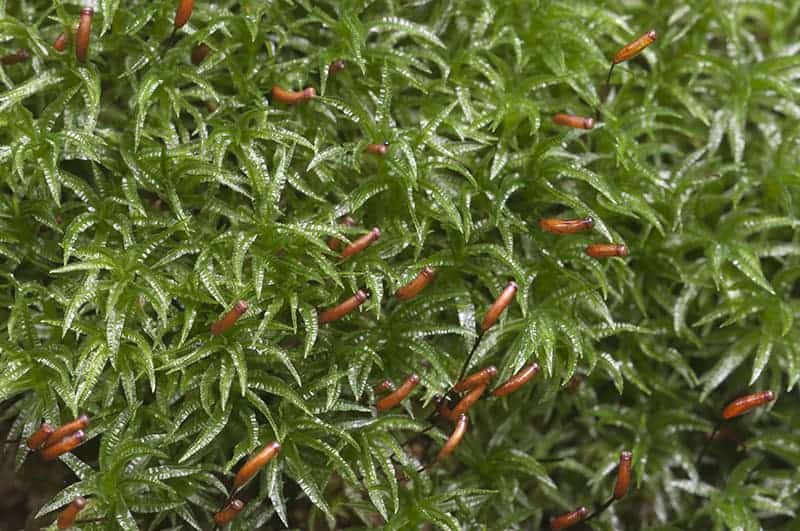 Mature Size: Up to 3 inches tall

Special Features: Will grow on almost any moist surface

This moss is also known as ‘big star moss’ because its lance-shaped leaves spread out from the stems to create a wide star shape when looked on from above. Leaves are bright green with a stiff texture, which becomes crispy when the plant is dry. It is commonly found growing on rocks and grasslands and will tolerate a wide range of soil types. It prefers a shaded position but will cope with some exposure to sunlight. 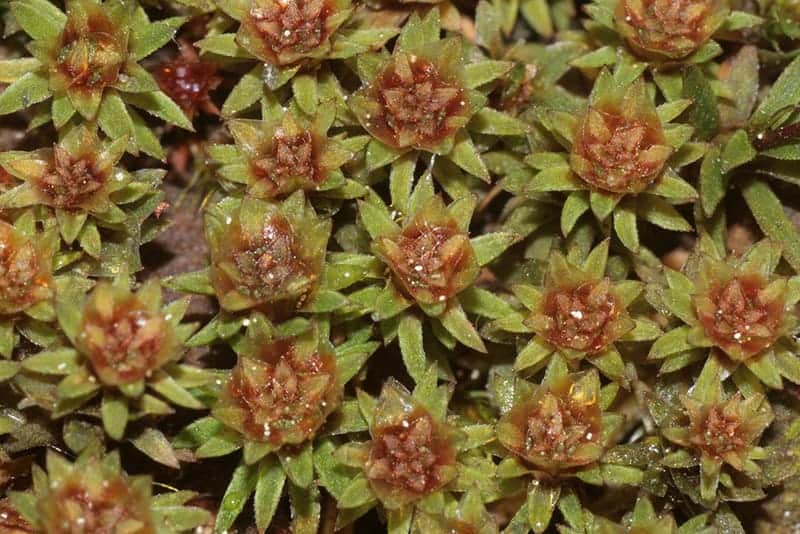 Mature Size: Up to 1 inch tall

This attractive moss has more of a look of a succulent plant than typical moss. It has stubby red stems from which stiff triangular foliage grows in a rosette pattern, much like an aloe plant. It enjoys heavy shade and will grow abundantly in sheltered areas on sandy soil and rotting logs. 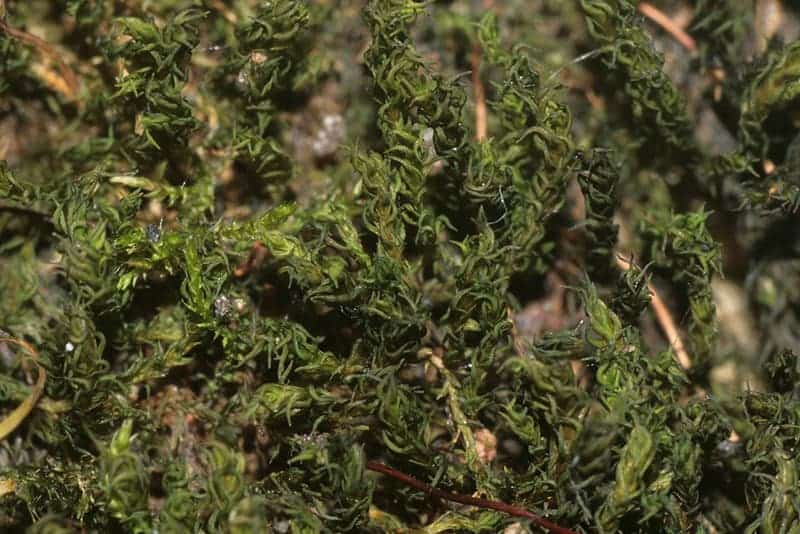 Mature Size: Up to one-third of an inch tall

This is the most common moss among the Didymodon species. It is commonly found growing amongst gaps in concrete, paving slabs, rocks, and bricks in old walls. It is made up of lots of tiny leaves that clump together to form soft, dense mats. It has a dark emerald green color and prefers moist, shaded conditions. 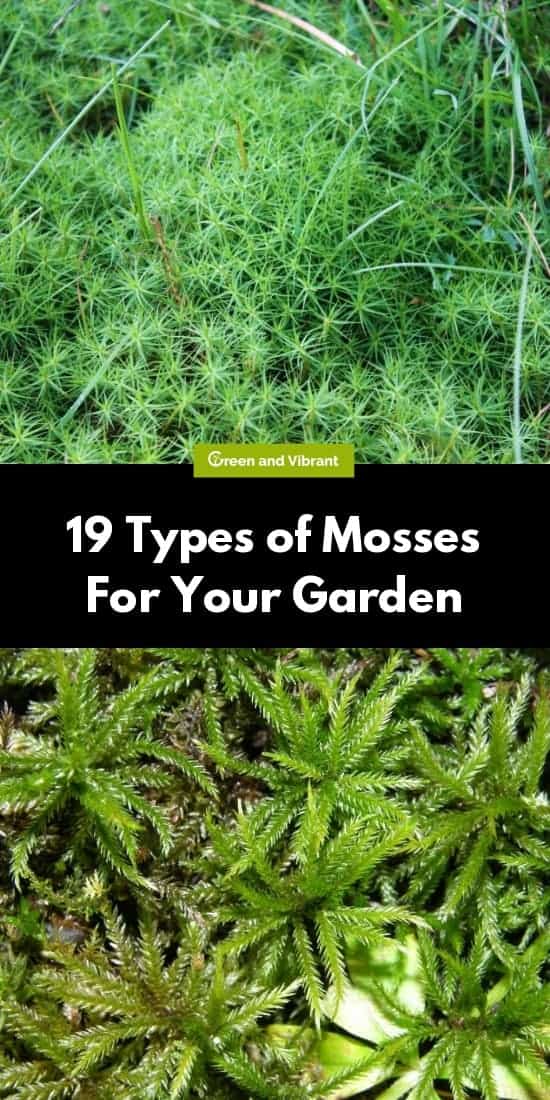