June Bugs – How to Control and Eliminate These Irritating Pests 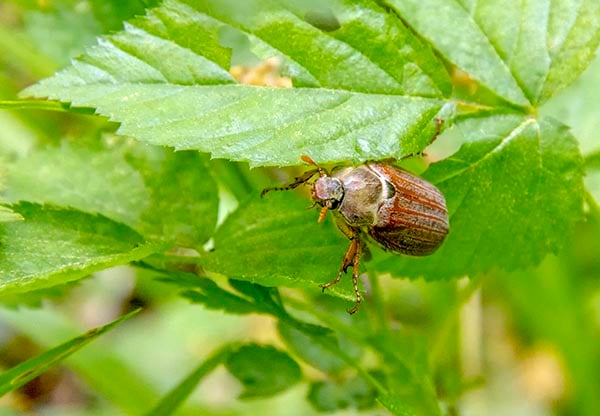 Most people don’t mind June Bugs. They don’t bite or sting or look particularly disturbing. They do, however, eat a variety of plants. The nastier-looking grubs also chew the roots of plants, destroying grasses and other plantings from beneath the soil.

Here’s what you need to know to manage and get rid of them if they become a problem in your lawn or garden.

Where Do June Bugs Come From?

June bugs are commonly found in North America, especially the north east, as well as eastern Canada, and some countries in South America.

True to their name, they are only usually evident in the months of May and June with adults dying off in the late summer until newly hatched adults reemerge once again the following May.

There are nearly 300 species of beetles that are all commonly referred to as June bugs. While all belonging to the family of Scarabaeidae and the order Coleoptera, they can vary in appearance.

June bugs fall into the sub-family of Melolonthinae (Britannica Encyclopedia) They all feature heavy, oval-shaped bodies, but have several differences depending on species.

The Phyllophaga species, which literally translates to ‘leaf eater,’ is often mistaken for the cockroach due to it’s hard, shiny body. This species can be identified by its brown and shiny exterior, its hairy underbelly, six legs, and a pair of antennae (Texas A&M Agrilife Extension).

The Phyllophaga adult grows up to an inch in length and is nocturnal, so will most often be found in the evening, flying around plants or sources of light. It is renowned for being a weak and clumsy flyer and so will frequently be seen crashing into windows or porch screens, trying to get to the light it is naturally drawn to.

Another beetle commonly referred to as the June bug or the Japanese beetle is the species of Popillia japonica. This is a slightly smaller variety of June bug at around half an inch in length. 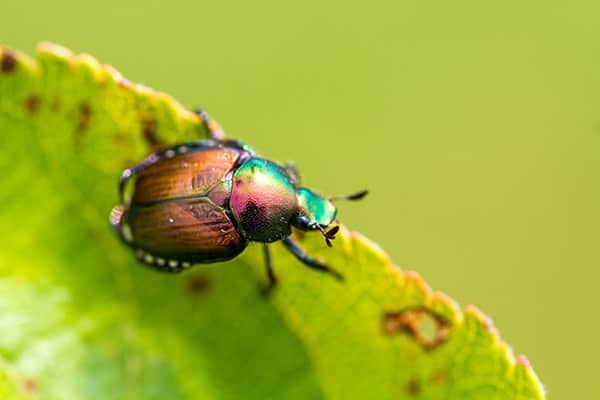 The Popillia japonica has mid-brown colored wings with a metallic green-blue head and clumps of white hair growing lengthways along the side of each edge (The Old Farmer’s Almanac). They generally stay in small groups, especially to feed.

The Green June bug is of the Cotinus nitida species. The upper body of the adult has a smooth, velvet-like texture and is green in color. Stripes run along the length of the wings in shades of green, yellow, or orange while the underside of the beetle is metallic and shiny in green or gold (Penn State- College of Agriculture, Department of Entomology). 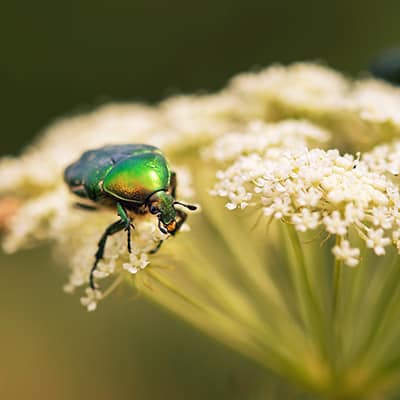 The so-called Tenlined June beetle, scientifically named Polyphylla decemlineata, is another type of June bug with features distinguishing it from the others. The adult Tenlined June beetle is one of the largest June bugs, measuring up to an inch and a half in length. It is brown in color, and as you may have guessed from the name, it has ten distinctive white stripes running lengthwise down its body. The Tenlined June beetle also has clubbed antennae and is found in large numbers west of the Rocky Mountains (Washington State University). 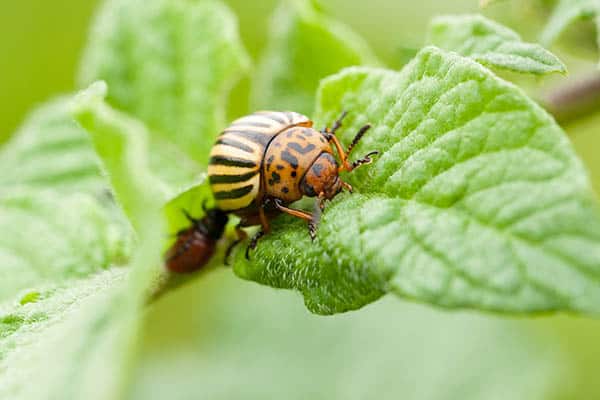 European Chafer bugs are another type of beetle that is known under the broad name of June bug. They are more formally referred to as Rhizotrogus majalis and are smaller than most other June bugs at half an inch in length. They are a tan brown color and can mostly be found in turf and lawns. Originally native to Europe, they have been found in North America since the 1940s with reports of June bug sightings now coming from southern Ontario, Connecticut, New York, Massachusetts, Ohio, New Jersey, Rhode Island, Pennsylvania, Delaware and Michigan (Michigan State University). 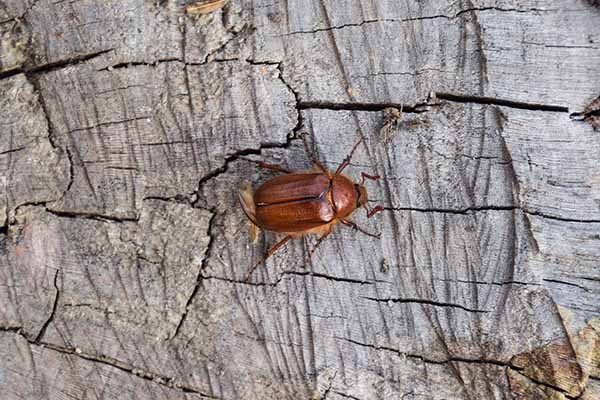 The Green fruit beetle, also commonly known as the fig-eater, or the Green fig beetle, is scientifically named Cotinis mutabilis. They are a metallic green color and can usually be found on soft, ripe fruits, such as figs, plums, and peaches. They are well established across the east of the United States (University of California- Agriculture and Natural Resources).

There are six main types of beetle that are collectively known as June bugs, and amongst these, there are many hundreds of different species.

The six most common types are as follows.

Life Cycle of a June Bug

After mating in early summer, June bugs dig into the preferably moist and organic soil of lawns or turf to lay their eggs. They lay the eggs in clusters of 10 to 70 at a time, depending on the type of June bug, around two to ten inches below the soils surface (Penn State- College of Agricultural Sciences).

Depending on the type of June bug, the eggs are either oval or almost round, and are white in color. They are roughly 1/16 of an inch across and hatch between one and four weeks later, depending on species.

The first larvae emerge from the soil in early August, and this is known as the first instar stage, of which there are three stages in total. The larvae, commonly called grubs, are the shape of a ‘c’, and less than half an inch long. They have three pairs of legs on the thorax and a brownish-colored head (Washington State University).

The grubs of June bugs feed on decomposing organic matter, as well as turf roots. By the beginning of September, most grubs will have reached their second instar phase and will measure approximately half an inch.

The third instar phase will have begun by the beginning of October with grubs, then, measuring up to an inch in length. They will continue to feed until the ground freezes, usually in November, at which point they remain just below the frozen soil over the winter.

As the ground thaws in early spring, the grubs will re-emerge to feed on lawn roots, although only 76% of them will have survived (Michigan State University).

Usually, during May, the grubs will burrow between two to ten inches into the earth to pupate. Approximately two weeks later, they emerge as adults. The larval stage can last several years with some types of June bug producing a new generation every four years (although generations will overlap to ensure the existence of new June bugs every year). Other types of June bug will produce new generations annually.

Adults, as you would expect from their name, are evident most commonly during May and June, disappearing by mid to late summer, although this can differ between species.

All June bugs, with the exception of the Green June bug, are inactive during the day and spend their time hiding amongst weeds or grass. They appear in the evenings and are particularly drawn to sources of light. Females give off a sex pheromone to attract the males, and will mate to begin a new life cycle of June bugs. 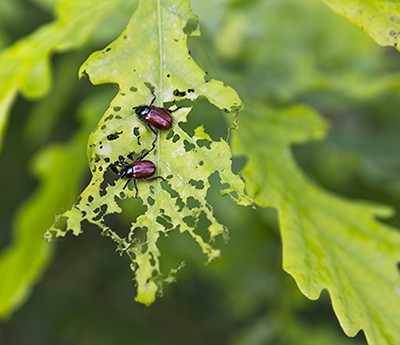 June bugs are a common pest for gardeners and farmers alike with preferences of host plants differing between the type of June bug. One thing that all June bugs do have in common is that the larvae present the biggest problem to plants and lawns.

Grubs will feed on turf roots, causing large patches of dead grass on lawns. They will also feed on root systems of plants without much discrimination on the type of plant they eat.

Tenlined June beetle: The adult feeds on large leaves and some conifer bushes. They are common pests on almond and apple trees as well as roses, corn, strawberries, and potatoes (Washington State University).

European Chafer beetle: This type of June bug predominantly causes damage to lawns. The grubs are particularly harmful when rainfall is low and new roots cannot grow to replace old damaged ones. The grubs will feed on grass roots, causing large areas of dead lawns.

Green June bug: This type of June bug is a recognized turf pest across many states in the USA. The grubs feed heavily on the roots of turf while the adult feeds on soft-skinned fruits.

Japanese beetle: This type of June bug is a pest during both its larval and adult stages. While the grubs feed on roots, the adults feast on a wide variety of over 300 crops and flowers. They are known to prefer raspberries, grapes, beans, and roses.

Common June bug: The common June bug is primarily found eating the foliage of leafy plants as well as maize, corn, and walnut and oak trees.

Green fruit beetle: Also commonly known as the fig-eater, this June bug, in its adult form, likes to eat figs and other ripe, soft fruits, such as plums and peaches.

The damage caused to lawns presents itself as dead patches of brown grass. If the grub infestation is severe, entire lawns of dried, brown grass can be seen. Symptoms of a grub infestation will be at its worst if the ground is not moist as new roots will not have the opportunity to grow to replace the roots eaten by the grubs, making the damage all the more evident.

Damage to lawns can also be caused by skunks and raccoons while they are trying to find grubs to eat. They can claw at the soil, digging up patches of turf, and leaving mounds behind in the search for their meal.

Damage to foliage or fruit and vegetables caused by the adult June bug will look like holes of various sizes. Depending on the size of the infestation, June bugs can completely skeletonize a leaf or plant. Damage to crops will show clearly nibbled holes in the flesh of fruits or vegetables.

Make June bug traps from fruit juice in a large container with a wide-opening funnel at the top. The adult bugs will travel down the funnel into the container as they are attracted to the fruit juice and will be unable to escape.

Beneficial insects can significantly reduce the number of June bugs. Parasitic wasps are particularly good at this as they burrow into the earth and paralyze the grub before laying an egg on it. Once hatched, the parasitic wasp will eat the grub to continue its life cycle.

Natural predators of June bugs include frogs, snakes, and lizards. Encouraging these creatures to live in your garden with the use of a water source or a small shelter can help to keep June bug infestations at bay.

Bacillus thuringiensis var. Kurstaki, also known as BT, is a highly effective naturally occurring bacteria that will destroy grubs when applied to the lawn. The benefits of BT are that it is organic and non-harmful to humans and pets.

Insecticides can be used for particularly severe infestations, but should be used with caution.

Maintain a healthy lawn to encourage recovery from grubs and help to mask dead turf. You could also over seed with grass seed when damage appears to encourage new growth.

Frequent irrigation of turf during late June will discourage females from burying their eggs there. Also, harvest fruit early and dispose of fallen fruit.

June bugs, while they can be irritating, don’t present a threat to people. They do not bite and are fairly easily controlled as garden pests using preventative methods or clever planning. Grubs present the biggest problem, as by the time they are discovered, the damage is already done to your lawn. However, once a grub infestation is suspected, it can usually be treated without having to resort to the use of harmful insecticides.