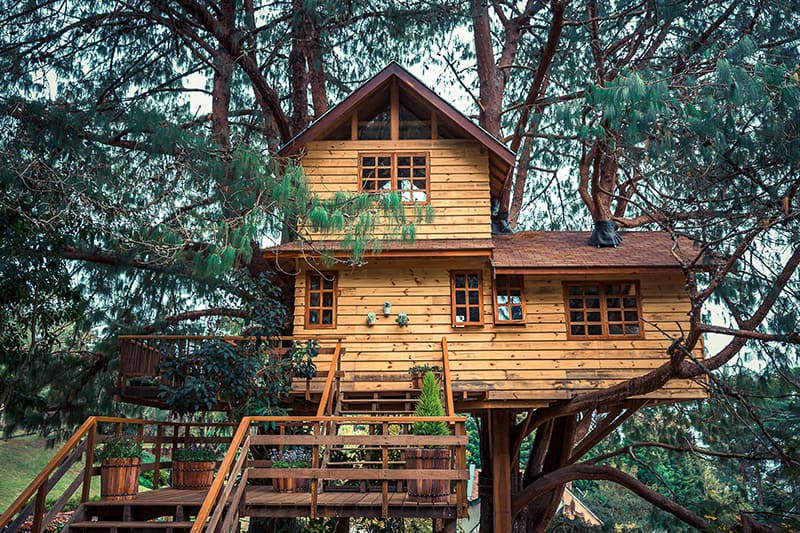 Ah, a treehouse. Is there anything that symbolizes the joy, freedom, and magic of childhood better than this iconic structure? It brings kids and adults closer together and closer to nature. Over time, with the ever-increasing interest and the better accessibility of power-tools, treehouses have evolved form simple tree decks to elaborate, two-story buildings with many creative solutions.

Is making a treehouse difficult? It can be, but it doesn’t have to be, as long as you have some basic building experience.

Of course, the difficulty level depends on the design itself.

So, if you have some maker experience, a piece of land, a few old, sturdy trees on it, and some power tools, don’t wait for another second – start searching for your perfect treehouse immediately.

What Is A Treehouse?

Dictionary.com defines Treehouse as “a small house, especially one for children to play in, built or placed up in the branches of a tree.”

You could say that the definition is a bit outdated in one respect – these days, treehouses are coveted by adults and children alike! That happened partially because of the popular Treehouse Masters TV show, which we will discuss a bit later.

There isn’t a standard codebook for building treehouses, and there are several different options for doing most things when building a treehouse. So the most important things are that you find a plan that suits you the most and that it is detailed enough

Let’s get to the point. Here are some treehouse articles, and practical treehouse tutorials, projects, and courses to get you inspired. Some of them are full-blown tutorials with detailed instructions. A few of them are not so instructional but are an awesome resource to get your inspiration from.

As for the difficulty levels, the important thing to point out is that he treehouses labeled with “Easy” still require basic carpentry skills, as mentioned earlier. 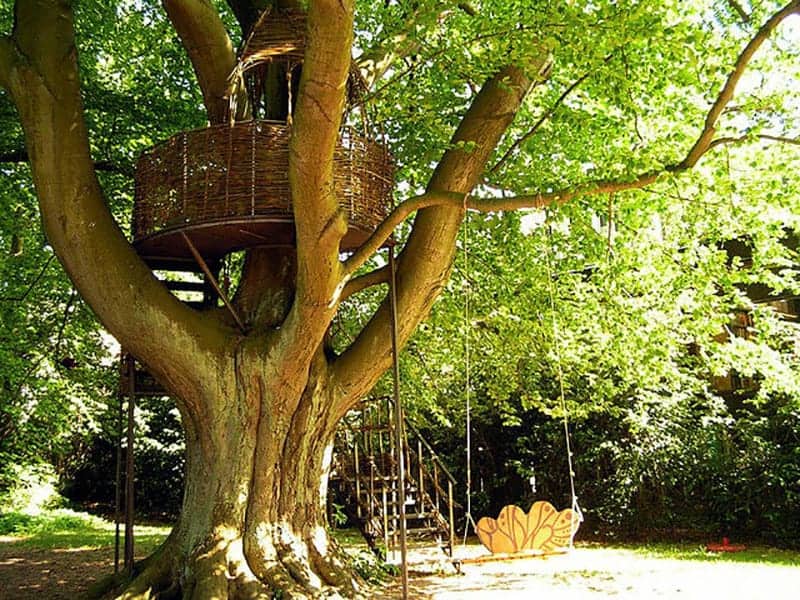 This article, or a similar one, should be your first stop. Building a treehouse requires some building or making the experience, but even when you do have that experience – it can seem intimidating. This is mostly because the risks of a faulty treehouse are big. If your treehouse fails and falls, someone could get hurt. This is especially concerning since the main users of treehouses are kids. 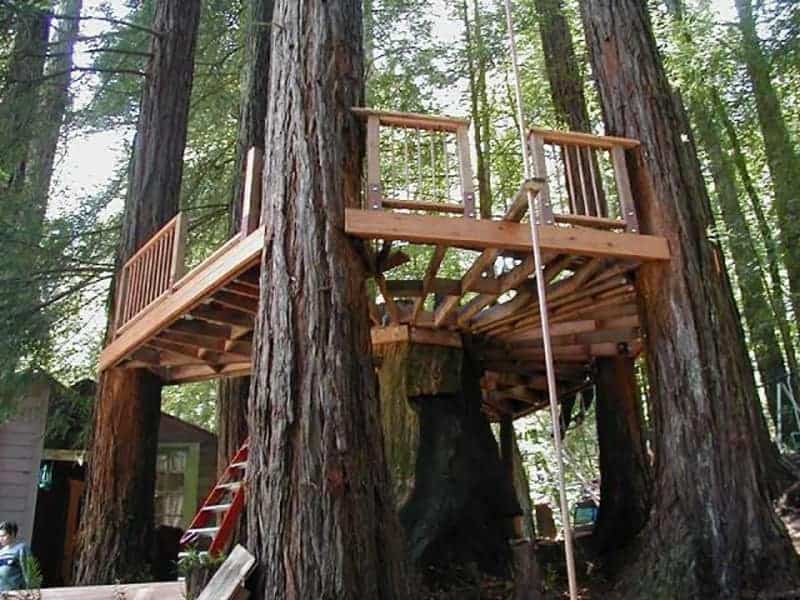 A tree deck or a platform is simpler than a treehouse – since it has no roof or walls, it is easier to make everything leveled and secured.

What’s interesting about the design is that it features spider web-shaped support, assessed by an expert to be able to support a two-story house.

The end result features some wonderful details, like the captain’s wheel in the middle of the platform and the matching sailboat-like roping instead of ladders to support this vintage ship aesthetic. 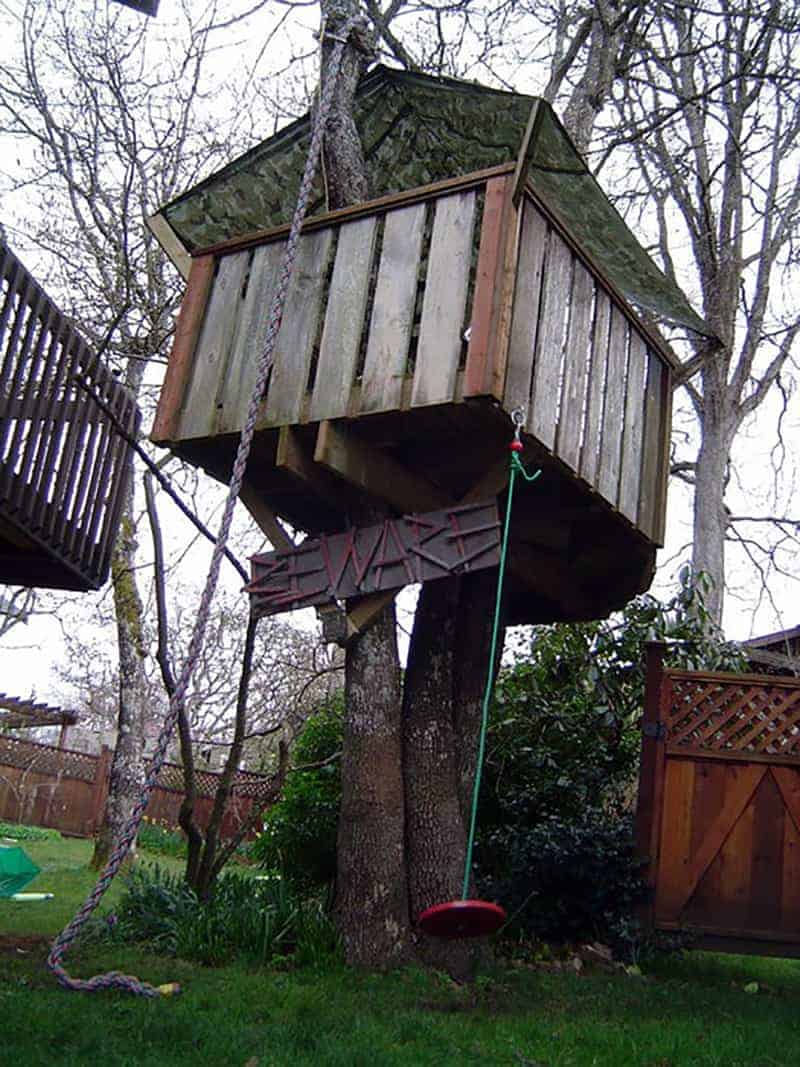 Instructables user makendo offers an open treehouse design that falls between a treehouse and a platform. The advantage of a lighter type of treehouse is that it can be set up a bit higher than the more elaborate designs.

This particular design required two or tree trunks or heavy branches that are close to each other. The dominant material is the new, pressure-treated wood, with the addition of an old fence that was recycled for the sides.

As it is pretty much open, this plan falls into a summer treehouse category – it is not weather-proof, though the author claims that it still stays pretty dry inside. 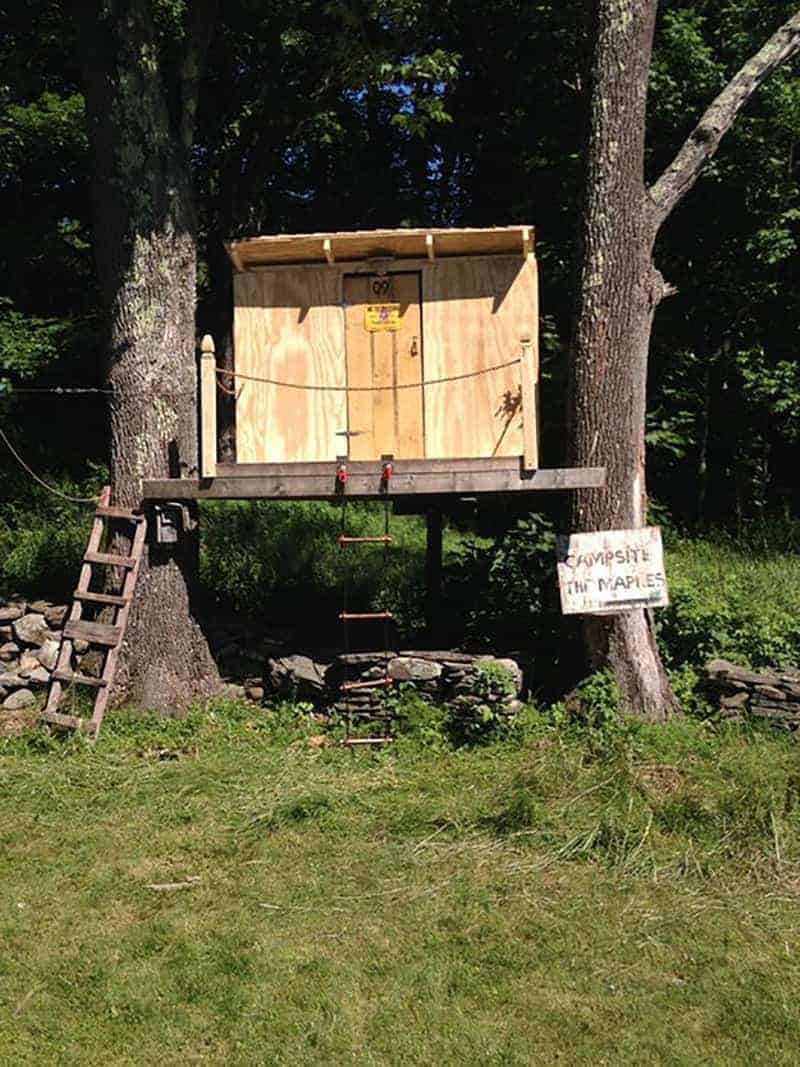 The author has designed this treehouse as a small shed, with a typical sloped roof with wonderful grade D cedar shingles.

Unlike many other projects listed here, it was made out of the wholesome sheets of plywood and features no windows at least for now.

The main upside of this design is its simplicity. The author says that this particular construction is just the beginning and further upgrades are expected.

5. A Basic Treehouse by Figuring it Out

Here’s another tree deck design, perfect if you are unsure that you could build a true treehouse.

Unlike the I Like To Make Stuff video tutorial, this video doesn’t show the process of the building. It is a tour of the already made treehouse deck, but it goes into a decent amount of detail. It is likely you will know exactly what to do after watching it. 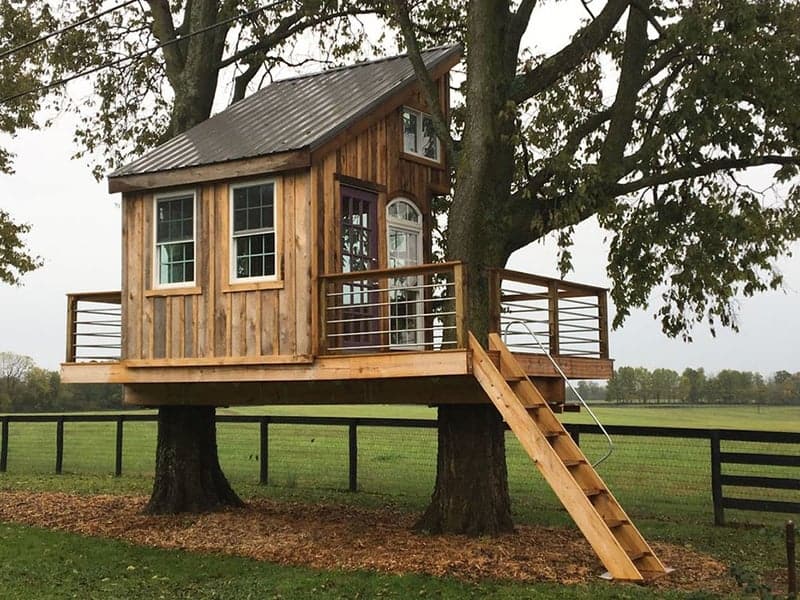 Did you ever want a treehouse that goes beyond being a simple platform, and resembles a real house? It has features of the real house, but it is completely doable. Not essentially easy, but doable. To make things even more special, it is not just a treehouse – it’s a loft treehouse!

Another wonderful feature of this house is its windows and glass doors. making it really filled with daylight and appropriate for the creation of your own little wildlife observatory in the canopy. Currently, this is a popular trend in treehouse design.

Since the treehouse is quite massive, the author didn’t take any chances and has hired a professional to install the treehouse attachment bolts. Also, he had the help of an arborist to help him pick the right tree. This emphasizes that safety is really important with these projects, even if the treehouse is not far above the ground. An error in this respect could cost a lot and be a danger to life and limb.

The “Epic” treehouse isn’t too tall and is accessed via stairs.

As for the tutorial, it is long and detailed, helping you learn a lot about treehouse building even if in the end you opt to build another project. It has 13 steps – pay special attention to the last one called “Funny details” since it shows some creative solutions that can be incorporated even in other projects. 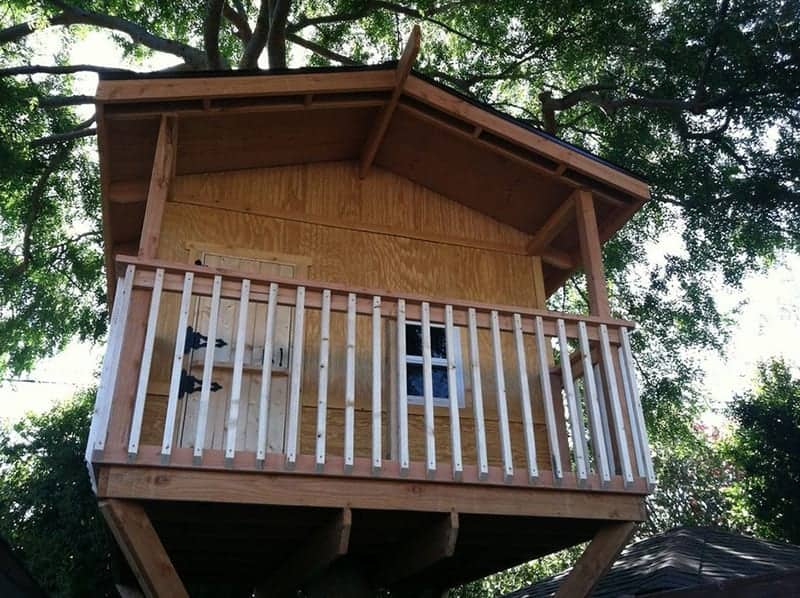 The project by Bloomie972 on Instructables is also a complete little house like our last example, only with fewer windows. This has its advantages and disadvantages. Obviously, the house has less light inside, but this also makes it cozier and presumably warmer. The doors are really nice and many details – such as the spacing of the steps on the access ladder – have been done with “little legs” in mind.

The tutorial is not very long, but it is filled with meaningful advice, so it is well worth reading even if you opt for another plan. 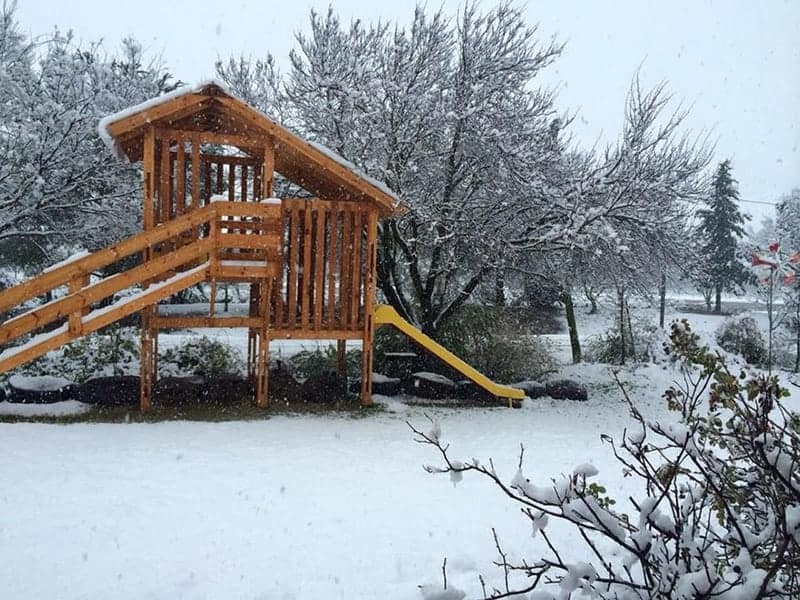 Believe it or not, the idea for this beautiful, elaborate treehouse sparked for two simple wooden crates that needed repurposing. By the skillful vision of its designer (who is a professional – no surprise there), the pile of wood destined for landfills became this amazing playhouse.

And it’s not the only recycled item. Even better for the Earth, the slide, which is a cherry on the cake of this project is also upcycled. During the planning phase, the author found an abandoned old slide and asked the ex-owner if he could take it away and use it. The rest is history.

Can you imagine a more fun way to get down from a treehouse than a slide? Frankly, I can’t.

9. Treehouse on Two Trees by dk31rc 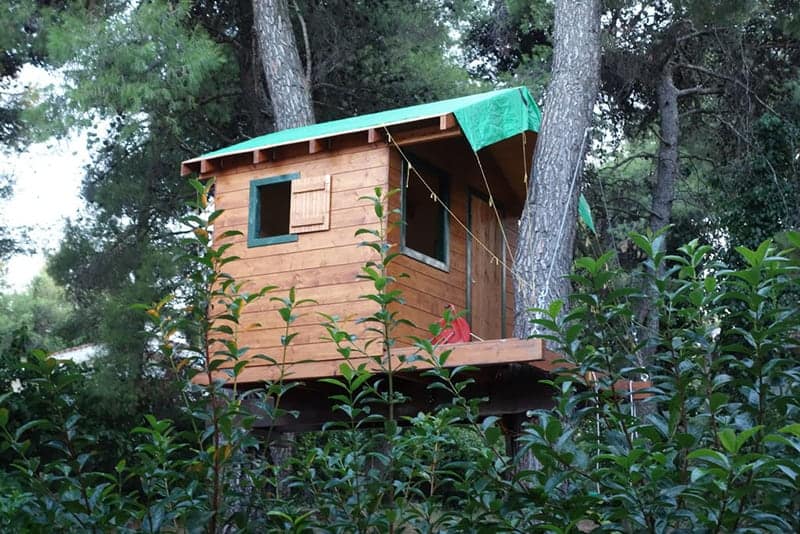 With its 22 steps, this is the most detailed treehouse tutorial on our list. It features detailed plans, drawings, and photos. The end result is a proper, incredibly cute treehouse.

The only issue is that the last several steps are still missing. Let’s hope that the author will provide them soon, though I believe you can do without them and look for solutions within other projects.

This is likely the most popular treehouse video tutorial on Youtube, created by the famous maker channel I Like To Make Stuff. It has two parts each just under 20 minutes, so in about 35 minutes total, you will get an opportunity to hear a lot of great treehouse advice and see

This video is not a true tutorial, but a wonderful time-lapse video which’s purpose is (well, except showing off the builder’s superb skills) to inspire you to do imagine a different treehouse. For example, the one that has six corners instead of four.

It was built by two professionals in Idaho, using a spiderweb base and the fairy ring to attach to the tree – we’ve seen both of these techniques in our first example on the list. But what is build upon them is much more elaborate.

The spectacular all-around view (that features a lake view) in the end is sure to make you jealous.

Ethan has previously built his own hexagonal treehouse. If you’re curious, the short video shows some details of the process, including how boards for the house were made from raw wood. To makes things crazier, Ethan’s house can be rotated 360 degrees and features a bicycle elevator (!). Is Mr. Schlussler the most innovative treehouse builder out there? Very likely, yes!

12. How to Build a Treehouse by David Parfitt

Everything we talked about up until this point have been free treehouse building resources. This approach has it’s pros and cons. While obviously easily available, free resources can be incomplete or lack crucial detail. It is likely you will have to study multiple free resources until you get the whole picture. This is not a bad thing of itself – seeing things from different angles in actually an advantage – but for some people just don’t have a lot of free time on their hands and would like a more comprehensive approach.

If you are one of those people and don’t spare the money to get some in-depth knowledge, buying an online course in building treehouses on an education platform can be a good choice.

In his course at Learning With The Experts, David Parfitt covers all the essentials – from the very beginning (tree types and shapes) to the final touches and customizations of the treehouse.

Besides this online course, ask around for workshops like this one in your area if you prefer conventional classroom learning.

Did you know that there is an entire reality show that is all about treehouses? Animal Planet’s Treehouse Masters was led by Pete Nilson, a world-renowned treehouse designer, and builder. The show aired from 2013 to 2018 and sprouted 11 seasons of treehouse-centered entertainment – and education.

Like with the hexagonal treehouse above, the show is not made to be a bunch of step-by-step tutorials – which doesn’t mean you can’t learn a whole lot from it! When you leave out the must-have reality drama, you will be able to extract some great info on treehouses. The tasks vary from episode to episode, but almost all designs are really elaborate, challenging, and luxurious even (maybe it would be more appropriate to call the show Tree-Maison Masters), which is what makes the series fun to watch.

Although no one expects you to replicate what you will see in the show, you can harvest some of the professional builder’s ideas and scale them down for your own use. It is a great additional resource to consume if you currently have the basic treehouse building skills and don’t know in which direction to upgrade those skills.

In this article you had an opportunity to see a myriad of DIY treehouse designs. Although some of them seem similar, each is special in its own way and offers a learning opportunity.

A treehouse is a maker challenge worth trying because the end result is so incredibly satisfying. An opportunity to create one of the most wonderful childhood memory centerpieces or an exquisite hang-out spot for adults is certainly the one you should take.

Have you ever built your own treehouse? How was the experience? Tell us all about it in the comment section below.