How to Rebloom Orchids – Our Best Tips 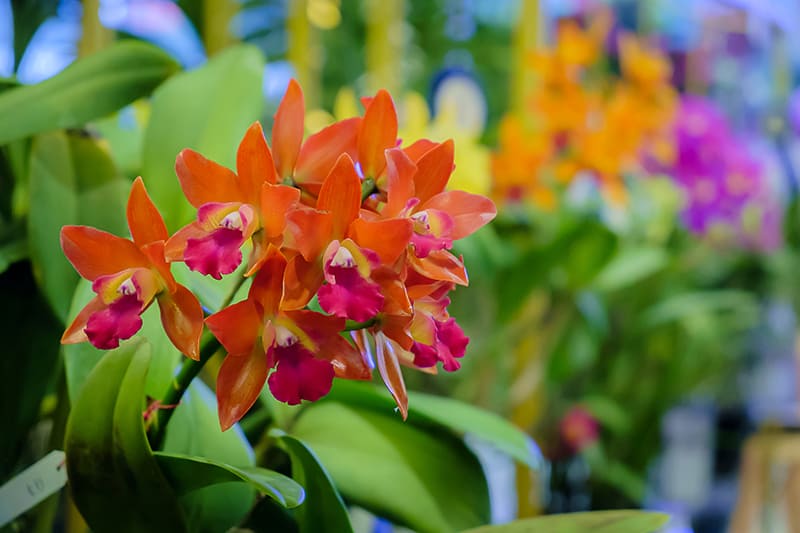 Orchids are common houseplants because they are beautiful and usually fairly inexpensive. People typically buy easy-to-bloom orchid types, or orchids while they are flowering, and when you take them home, their stunning blooms can last many weeks or even months. Once the flowers have, you may be tempted to discard the plant, but orchids are actually very easy to rebloom, and if you learn how to care for them to encourage this, then they can be very long-lived plants that will reward you with fresh new flowers every year.

After blooming, the orchid will enter a period of dormancy. It won’t make any visible growth, and instead, it will be resting and storing up its energy to use later. During a plant’s dormant phase, you would usually refrain from feeding it, but this is not true for orchids. While in dormancy, your orchid will need to replace all of the nutrients it used up during its flowering phase.

To help with this, feed your orchid with a balanced fertilizer, ideally 20-20-20. This should be done every few weeks. The dormant period can last as long as nine months, so do not be discouraged if your orchid is seemingly very slow to rebloom. While it rests, move it to a room that is slightly cooler than the rest of the house, such as a rarely used room like a spare bedroom.

Ideally, a dormant orchid should be in temperatures between 55 and 65°F. It should be kept in constant indirect sunlight until a new flower spike emerges, or the previous flower spike has new growth. When the flower spike reaches around five inches in height, it should be secured to a spike for support. Not long after the spike has exhibited growth, new flower buds should emerge. If your spikes do not produce flowers after several months of new growth, then this can indicate a problem with the plant’s position, and you should move it to a different room to see if that helps.

Orchids can be very temperamental when it comes to lighting and temperature requirements, and it may take some trial and error to find a spot it is happy in, but once your plant successfully reblooms, you will have more beautiful flowers that stay in bloom for up to two months, and you will know exactly how to get your orchid to rebloom next time.

Why Isn’t My Orchid Reblooming? 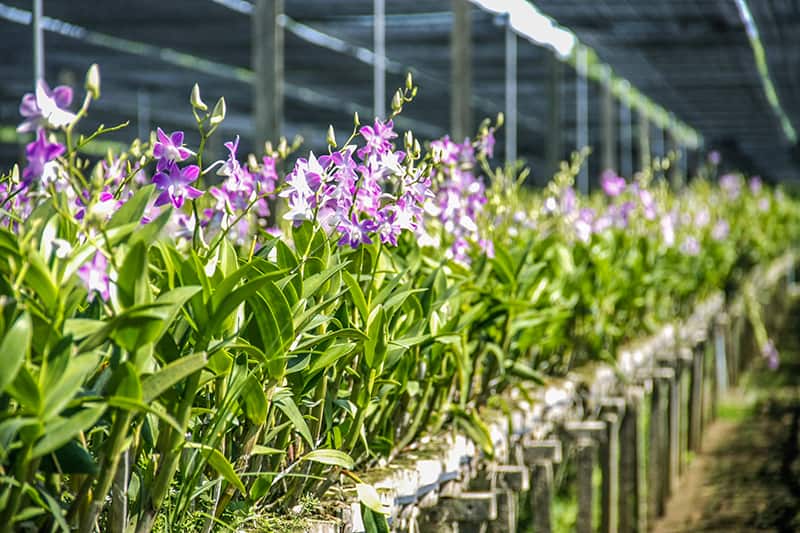 If you want your orchid to rebloom, then it should be in consistent indirect light. Direct light can cause obvious problems such as foliage scorching, but too much sun is also a common cause of preventing an orchid from reblooming. Surprisingly, artificial light can even inhibit an orchid’s ability to rebloom. This is because shorter days and longer periods of darkness are one of the key things that signal to an orchid that it is time to prepare for reblooming.

If your orchid is kept in a commonly used room in your home where lights are kept on into the evening, then the plant can miss its natural cue to rebloom. This is why during an orchid’s dormant period, it is best to keep it in a lesser used room in the home, or at least one that is not lit up during the naturally darker evenings. By allowing the orchid to keep its natural circadian rhythm, you will be helping to ensure it is prepared to rebloom.

While too much light is a problem for an orchid, not enough light can also cause similar results when it comes to trouble reblooming. Orchids are most commonly kept in a window, ideally, an east or west-facing window where they will get plenty of bright but indirect light. If you don’t have a suitable windowsill, or you simply want to keep your orchid somewhere you will enjoy it the most, such as by the side of your bed or as a centerpiece on a dining table, then you might need to invest in a grow light.

If your orchid does not get plentiful light during daytime hours, then it will certainly struggle to rebloom, but a grow light can really help in these situations, providing artificial light where natural light isn’t possible. Set your grow light on a timer so that it will turn off at the appropriate time of day; otherwise, you will end up with the opposite problem of too much light. 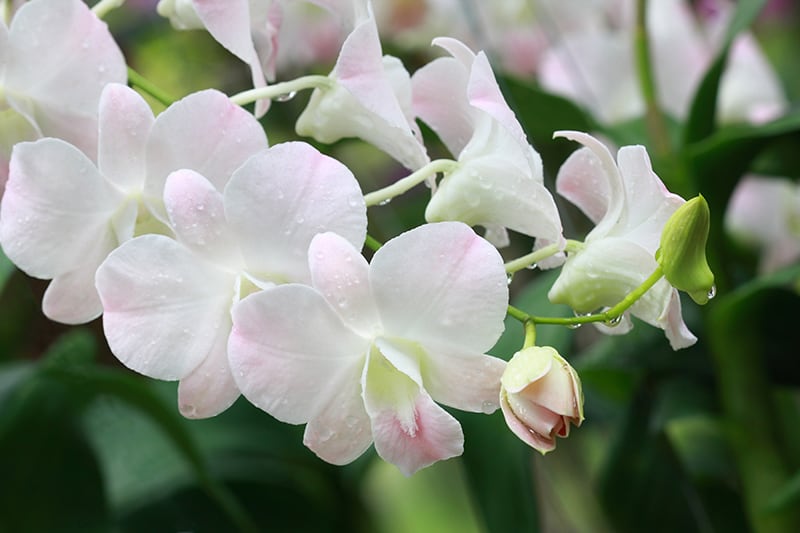 Overwatering is the main cause of death and decline amongst houseplants, and orchids are especially susceptible to this because their roots need to dry out between waterings. If your orchid is failing to rebloom and you are unsure if you have been watering it correctly, then the lack of new flowers could be an indication that the plant is about to die.

If an orchid does produce buds, but the buds then fail to open or fall from the plant, then this is a key sign that the plant is not being watered appropriately. The best way to resolve an overwatering issue is to repot the orchid, removing as much of the soggy soil as possible and replacing it with a fresh and dry orchid soil mix.

There are plenty of ways you can ensure that your orchid is watered correctly in the future, and you can avoid overwatering. Using the right type of growing material for your orchid is the best place to start. Pre-mixed orchid soils have a high content of bark, which allows water to flow through the soil very quickly while also retaining a small amount of moisture near to the plant’s roots. This is an ideal type of soil mix for an orchid, but you can also make your own orchid soil mix, ensuring that it is very well-draining.

Many types of orchid plant pots are transparent, and they have holes around the edges. This is because adequate airflow is vital to keep an orchid’s roots healthy, and the transparent pot means you can keep an eye on the roots and spot any potential problems before they become troublesome. You can use the clear pot to keep a check on when you should next water your plant.

Roots that are a fresh green color do not need to be watered, but when the green starts to fade, then this is an indication that the plant is ready to receive some more moisture. Just as with other houseplants, you should always ensure that your orchid pot has drainage holes in the base so that any excess water can easily flow away from the soil, and this should then be emptied away.

Keep an eye on the saucer or decorative pot your orchid is positioned in because resting in the drained water will make the plant’s roots constantly wet, which will quickly cause the demise of an orchid. If you use the right type of growing medium for an orchid and always dispose of excess water after watering the plant, then it will be very unlikely that your orchid becomes overwatered.

Too little water will typically not kill an orchid as quickly as overwatering will kill it, but it certainly can prevent the plant from reblooming. If an orchid does not have access to enough moisture to sustain its growth, then it will direct all of its available energy towards keeping the existing parts of the plant alive, such as the foliage, as opposed to putting energy into producing new flowers. In the event that the orchid has produced buds, these could dry out and fall from the plant if the orchid is underwater because the plant will absorb the moisture from the buds and redirect it elsewhere.

If you’re worried about overwatering, it can be natural to accidentally go too far in the opposite direction and unintentionally cause your plant to die of thirst, but try to remember that an orchid’s native habitat is in the rainforest where they will be subjected to frequent showers. While you should allow an orchid’s roots to dry out between watering, don’t leave them dry for long because the plant is not tolerant of drought, and reblooming will certainly be inhibited.

Orchids are not typically heavy feeders, but they do need to replenish their nutrients during their dormant stage in order to rebloom. If your soil mix is organic, then fertilizer isn’t essential, but a sterile inorganic soil mix can mean that an orchid has no access to nutrients, and it will struggle to gain the energy to rebloom in this situation. Use a balanced fertilizer during the orchid’s dormancy, and you should soon find that your orchid starts to produce buds.

Figuring out when an orchid needs repotting can be tricky business because while some orchids enjoy being rootbound, others require plenty of root space in order to rebloom. The best advice you could follow to decide whether to repot your orchid is to pay attention to the roots of the plant rather than the foliage. In order to do this effectively, you should be growing your orchid in a transparent pot.

Orchids need their soil mix to be quite chunky because as well as ensuring that it drains well, this also helps to ensure good airflow around the roots. Orchid soil, like any other soil, will break down over time. When it breaks down, and the chunky pieces become small particles, then the orchid needs to be repotted. If the soil resembles ordinary soil rather than an orchid soil mix, then again, you should repot your orchid. This is because small particles of soil will suffocate the roots, and they need ventilation in order to keep the orchid healthy and promote reblooming.

Unfortunately, some orchids resent being moved and will refuse to bloom for up to a year after repotting, but this is an essential part of orchid care, and without repotting, it may never bloom again at all. Another sign that you should repot your orchid is if several roots start to creep over the top of the pot, as this indicates that there is no room available in the pot. 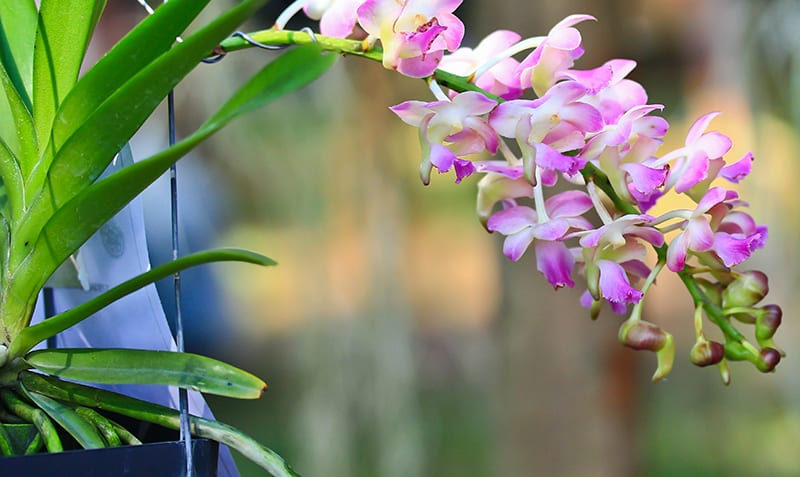 Orchids are tropical plants that enjoy warm environments, but in order to rebloom, they need to experience a temperature drop. This temperature change is a cue for the plant that it is time to rebloom. There are two ways to achieve this; either move your plant to a lesser used room in your home or move your orchid to a different room each night.

If you have a room in your home that is cooler than the rest, such as a basement or a spare bedroom, move your orchid to this room to spend the night, every night, for two weeks. You’re aiming to ensure the plant experiences around a ten-degree drop in temperature each night. Alternatively, if your home is heated during the day, turn the heating off overnight, and this will allow your plant to experience the necessary temperature drop. This will help to promote reblooming.

Though orchids do need a temperature change to produce flowers, take care not to put it in a room that is too cold, because orchids are sensitive plants that will not react well to this. They should not be kept in temperatures lower than 50° F and should not be moved outside.