Tall and graceful with brightly colored flowers, hollyhocks, or Alcea rosea, are a classic garden staple. Most of this genus’ 60 species are wildflowers native to Asia and Europe, but hollyhocks are well-adpated to  to being grown in North America. While these plants are susceptible to some diseases and pests, overall they are easy to care for and reward attentive gardeners with beautiful blooms throughout the growing season. Other notable hollyhocks characteristics include: 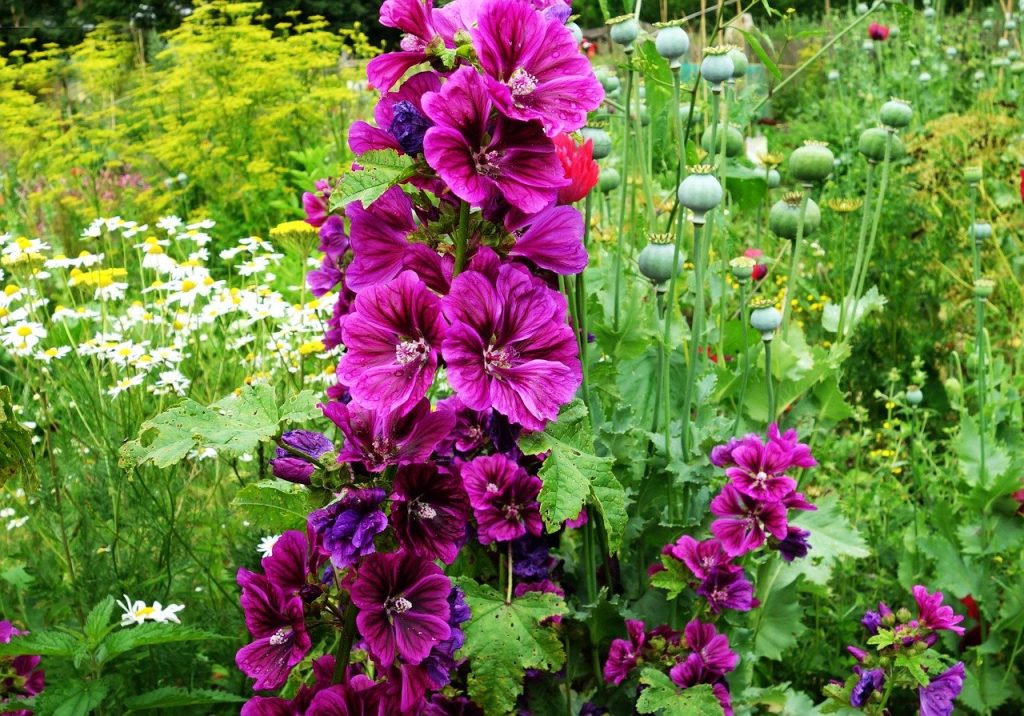 The watering needs of hollyhocks change throughout the plant’s life. When it is young, it must have continuously moist soil. To avoid waterlogged soil, which can cause root rot, plant your hollyhocks in well-draining soil. As the plant matures, it will become drought-tolerant, so  the frequency of watering decreases. Hollyhocks are prone to fungal infections caused by damp leaves, so always water at base level in the morning, which allows time to dry. Hollyhocks have minimal feeding needs — a light application of compost in the spring is usually sufficient. 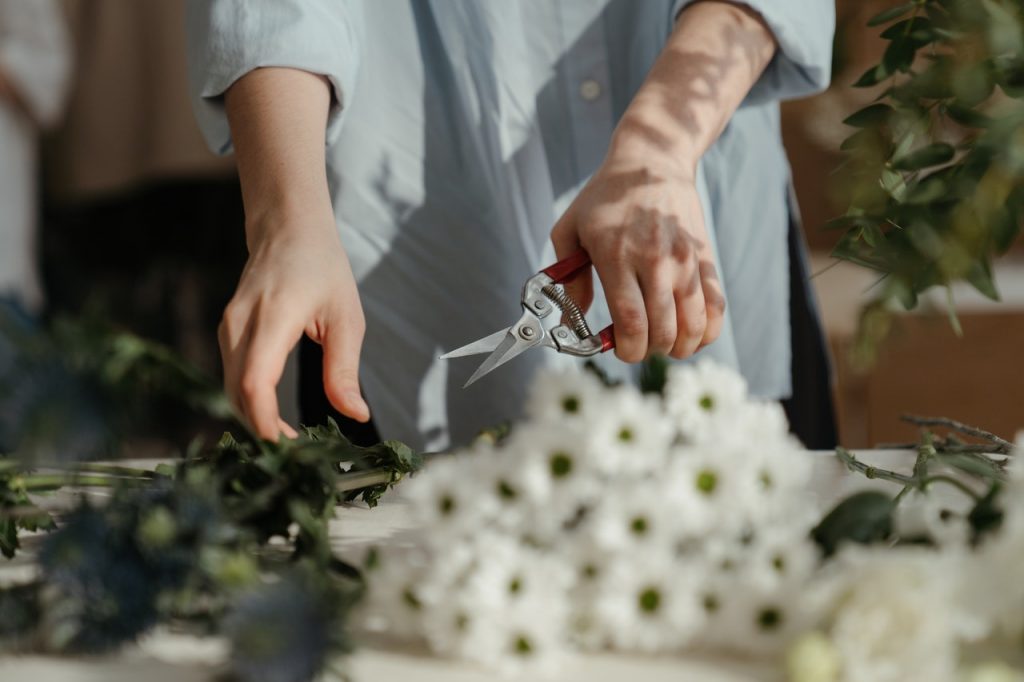 Hollyhocks do not require much pruning to stay healthy and attractive. However, because these plants are self-seeding, if you do not want them to reseed in your garden, deadhead flowers at the end of their life cycle by trimming them with clean, sharp shears or scissors. Otherwise, leave the spent flowers alone and they will disperse seeds into the ground. In the fall, after the plant dies back to the ground, you can cut the stalks back to a few inches above the ground and cover with straw or mulch to help the dormant roots survive the winter.

The most common diseases for hollyhocks are hollyhock rust and powdery mildew. These are both fungal diseases caused by too much humidity on the leaves, and can be prevented by watering at base level, making sure there is good air circulation, and removing debris from around the plant. It’s especially important to remove debris from around your plants at the end of the growing season, since powdery mildew overwinters in leaf debris. If your garden has a history of powdery mildew, pretreat the leaf surfaces of your hollyhock with a fungicide. These diseases spread quickly, so immediately remove infected leaves or the entire plant, if necessary.

Japanese beetles, hollyhock weevils, and sawflies are the most common pests that consume hollyhocks, and can usually be treated with insecticidal soaps or beetle traps. Hollyhocks are resistant to deer and rabbits. 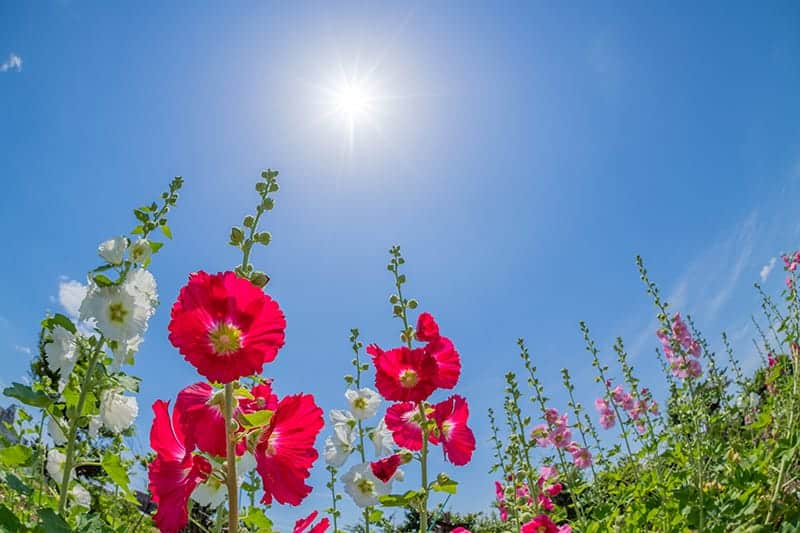 The amount of light your hollyhock needs will dictate where you plant it. Hollyhocks like plenty of sun, but they can also get scorched or wilt in extreme heat, so the amount of sun you can allow your hollyhock to receive will depend on your local climate. If your summers are fairly cool, then a position of full sun will be fine for your hollyhock, whereas if you live in a climate where summers are scorching hot, you will need to position your hollyhock in a spot where it can be protected from the afternoon sun.

Hollyhocks need at least six hours of direct sun a day in order to bloom, so pay careful attention to ensure your plant will get the necessary quota of sun if you are planting it in a position of partial shade.

Hollyhocks grow in a temperature range of 60-90º F as long as conditions are ideal. If the temperature drops below 55º F, it will die back to the ground, and you will need to mulch the soil in order to insulate the dormant roots to protect them from getting too cold.

When the temperature reaches the top end of the scale and gets much warmer than 85º F, you will need to pay extra attention to watering your hollyhock, as the soil will dry out more quickly in this heat, and maintaining moist soil is vital for hollyhocks in hot climates. In very hot climates, you should ensure the plant is shaded during intense afternoon heat so that the plant doesn’t overheat. Also, take care to protect the plant from wind by positioning it in a sheltered location. 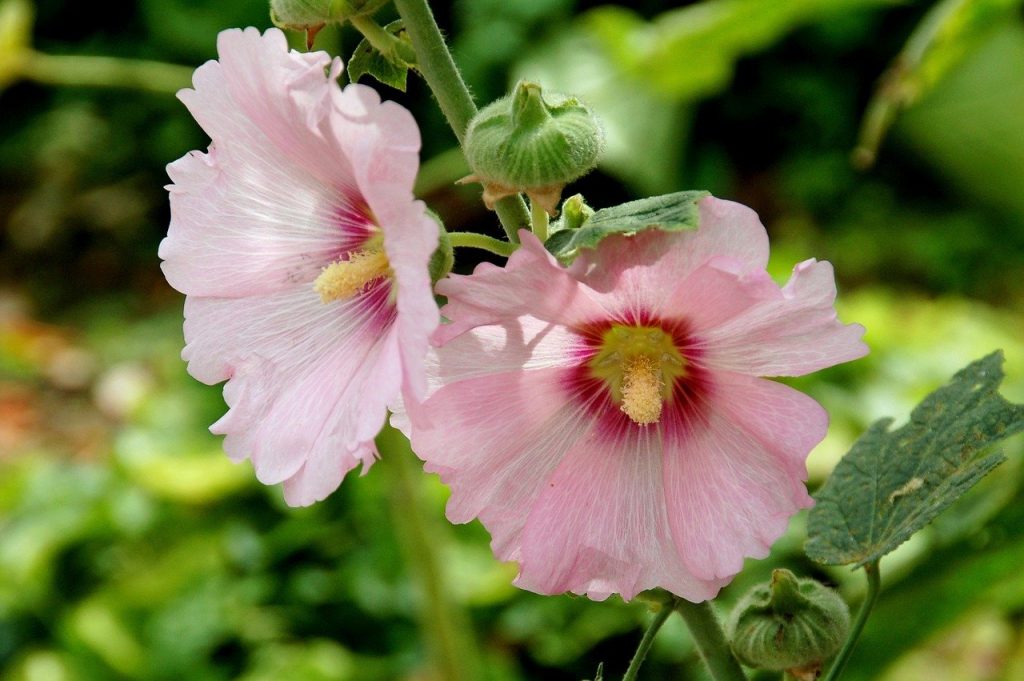 Hollyhocks don’t have any humidity requirements and actually fare worse in climates with high humidity as this makes them more susceptible to diseases such as rust. Hollyhocks need good air circulation, so enable this by planting them around 18 inches apart.

Most hollyhocks are biennials, which means they produce vegetation in their first year, and flower in their second year, before completing their life cycles. In some conditions, hollyhocks will flower for several years, where they are considered short-lived perennials. If you enjoy having hollyhocks reappear year after year, you needn’t be concerned by their short life span, as they are able to reseed without any intervention.

To allow the hollyhocks to reseed and produce future years of plants, simply refrain from deadheading the flowers until the seeds have dropped and dispersed. If you’d like more control over where the seeds get planted, you can harvest the seeds from the spent hollyhock flowers and sow them yourself. They can be sown indoors over winter ready for transplanting outside in spring, or you can sow them directly into the ground in spring. 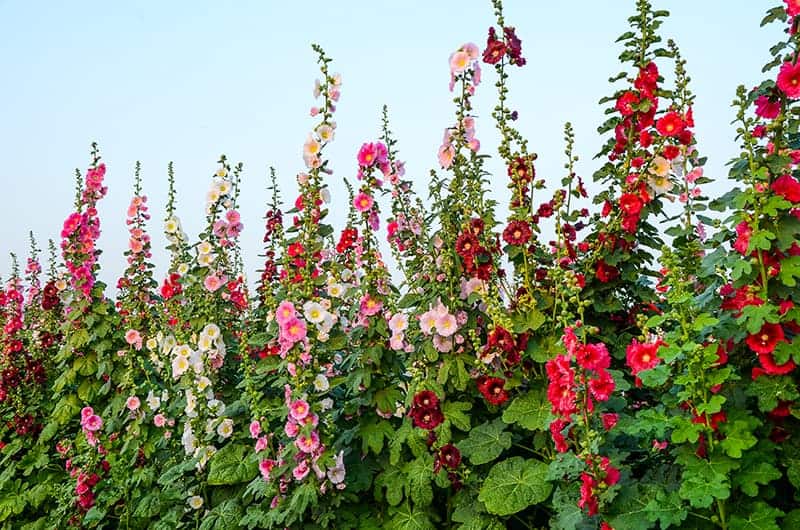 Hollyhock flowers are the attraction of this plant. They come in various colors, including pink, purple, red, blue, white, and yellow, and cover their spike-like stems from base to tip. They bloom in the plant’s second year, appearing in mid-summer and typically lasting from June through to August. The flowers are quite large, measuring around four inches across, and are shaped like shallow funnels (Royal Horticultural Society).

How much light do hollyhocks need?

Generally speaking, hollyhocks are sun-loving plants that require about six hours of sunlight each day to bloom. However, the type of sun an individual plant should receive depends on the climate in which it is planted. Hollyhocks will get scorched and wilt in extreme heat, so if you live in a location with summer temperatures that consistently exceed 85 degrees Fahrenheit, it is best to plant your hollyhocks in a location where they will receive shade during the hottest part of the day.

What temperature is ideal for hollyhocks?

Are there multiple varieties of hollyhocks?

Yes, there are roughly 60 different species of hollyhocks, most of which are native to Asia and Europe. There is one species, the streambank wild hollyhock, that is native to North America. Different species feature different colored flowers. For example, ‘Blacknight’ has dark purple flowers that are almost black; ‘Fiesta Time’ has bright pink flowers; ‘Queeny Purple’ has bright purple flowers, and ‘Chater’s Double’ come in a variety of colors, including salmon, yellow, white, and red.

Do hollyhocks return year after year?

The majority of hollyhocks species are biennials, meaning they have a two-year lifespan. Depending on how early in the spring they are planted, some varieties will flower in their first year. Others will flower in their second year, then die away. However, because hollyhocks are self-propagating (seeding the ground around them once their flowers die) many people believe their hollyhocks are perennials. If you would like hollyhocks in your garden consistently, allow the plants to self-seed.

In general, hollyhocks are not toxic if ingested by people or animals, but they can cause skin irritation for any person or animal that comes in contact with them. This can result in redness and itching on the skin and irritation in the mouth if they are ingested. It is recommended that you keep hollyhocks out of reach of curious pets and children, and wear protective gloves when handling these plants. 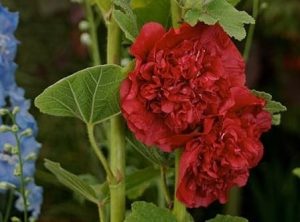 These hollyhocks have a romantic feel, with their frilly double flowers. They bloom in their second year and come in a variety of colors. 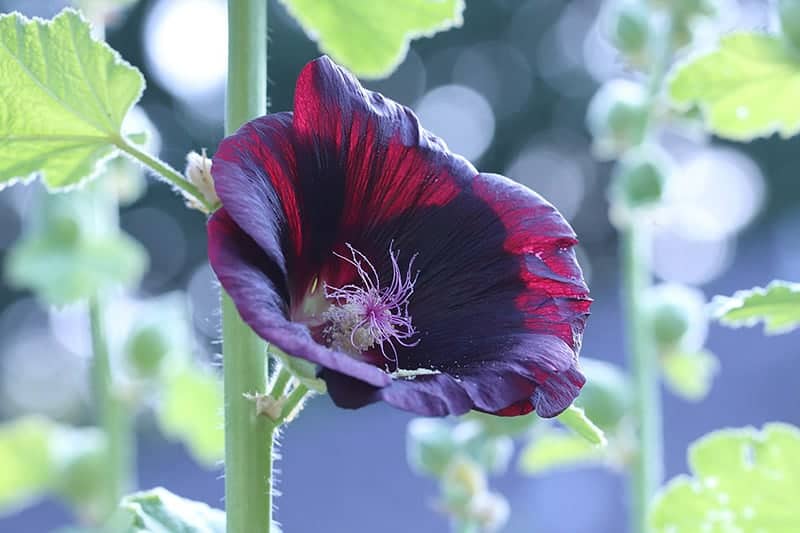 This hollyhock makes a real statement in any garden, with its unusual flowers in a deep shade of almost black. It is the darkest flowering hollyhock available and acts more like a perennial than biennial.

If planted soon enough, this dwarf hollyhock will bloom in the first year. It comes in an array of colors, including orange, red, yellow, and pink. It grows to just two feet tall and has a bush-forming habit.

In a vibrant cerise pink, this hollyhock blooms in its first year of life. It grows to three feet tall, making it ideal for growing in containers. 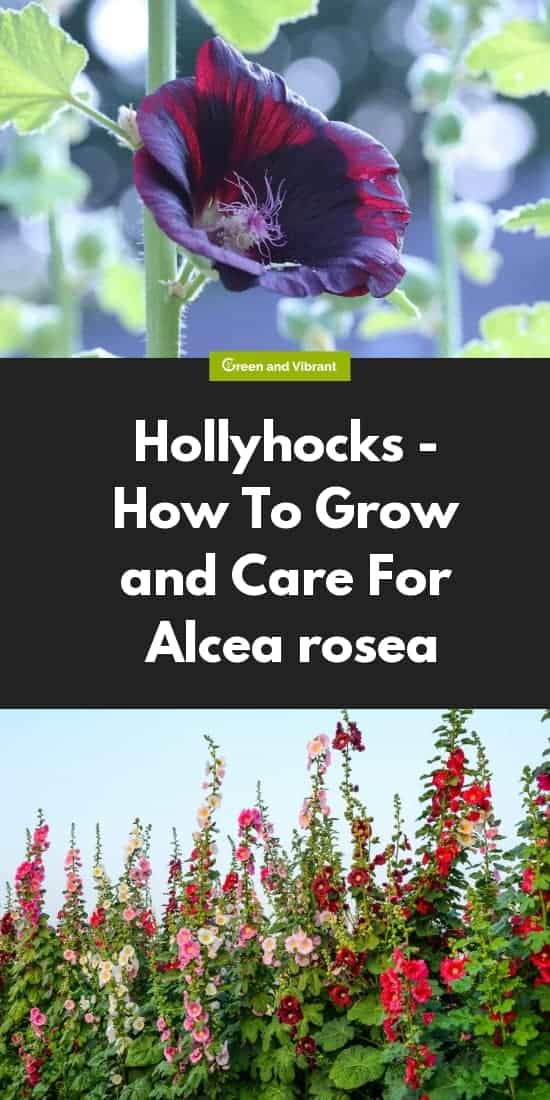