The flowers of the Shrimp plant, which look a lot like shrimp, can bloom all year long, but to achieve this, you’ll need to recreate its native environment as closely as possible. This includes ensuring it’s kept warm but not too hot, well-watered, and humid.

This plant thrives in shaded positions, and its flower grows directly above the plant in a spike of yellow and white.

The flowers of this plant are white, and it blooms even more heavily than the common Shrimp plant.

This plant has red flower bracts with purple flowers emerging from them. It has long green foliage which is streamed with silver veins and is almost as interesting as the blooms. It grows well in the shade but likes warm conditions.

This Mediterranean native is a compact shrub. It has one-inch blue flowers which are particularly attractive to bees.

The Shrimp plant should never be allowed to completely dry out, especially when it is flowering, but it also does not like to have wet feet. As a general guide, you can expect to be watering it around twice a week during the summer. Give it a generous watering and then, wait until the top few inches of soil have dried out before watering again.

Ensure the plant is growing in a well-draining soil, and if you are growing it in a container, make sure the pot has drainage holes; this will help to prevent overwatering and root rot. In winter, you can drastically reduce watering, waiting until almost all of the soil has dried out. 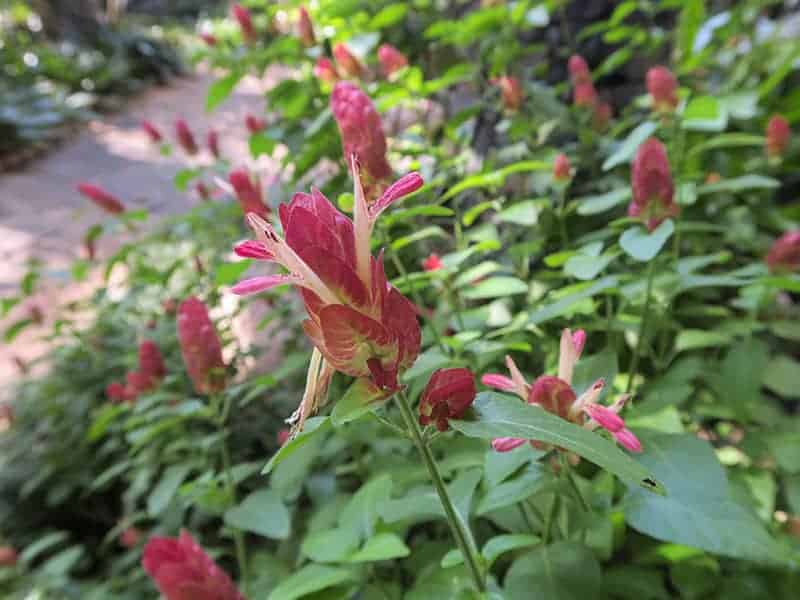 This tropical plant thrives in warm temperatures, though can be harmed if it gets too hot. Summer outdoor temperatures of 65-75º F are ideal. Some established Shrimp plants can remain outdoors all year round, dying back at the end of winter and then bouncing back to life in spring.

In areas where this is not possible, plant your Shrimp plant outdoors in a container so that it can be brought inside in winter months. During this time, regular indoor temperatures will work well for your Shrimp plant, and it should continue to flower throughout winter indoors, providing some bright visual interest in your home.

The Shrimp plant is native to exotic climates, such as Guatemala and Honduras, where the air is heavy and humid. Because of this, it likes to be grown in moderate to high humidity. If you grow the plant indoors with a normal humidity range, you will need to increase the moisture content of the air artificially. You can do this with a plug-in humidifier, or by lightly misting your plant with a water spray bottle. You could also use a pebble tray filled with water underneath the plant pot, which increases humidity as the water evaporates from the pebbles. 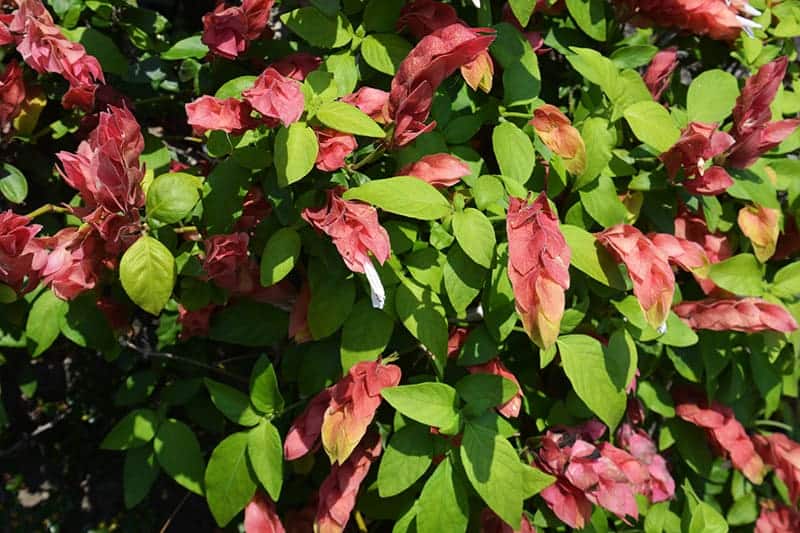 As a houseplant, this plant can be kept on a bright windowsill all year round. It can tolerate full sunlight but will do best with bright indirect light, as too much full sun will cause the bright colors of the flowers to fade. When kept indoors in a bright spot, this plant will flower all through the year.

Outside, the best lighting position of the Shrimp plant would be in a spot where it receives morning sun and is sheltered by shade in the afternoon. It can tolerate both full sun or partial shade when kept outdoors, but a mixture of both will help it thrive.

The Shrimp plant can be propagated easily through division or stem cuttings. To propagate by division, wait until your Shrimp plant has outgrown its pot, then instead of repotting to a larger pot, you can divide the plant in half at the root ball, or even into three separate plants. To do this, ease the plant out of its current pot and gently separate the roots until you have two or three separate plants. These smaller plants can then be repotted into different pots with fresh potting soil.

To propagate by stem cuttings, you will need a cutting with at least four sets of leaves on it. Remove the bottom set of leaves, then insert the cut end of the stem into a moist growing medium. If you wish, you can also dip the raw end in rooting hormone, but Shrimp plants tend to root so easily that this is not necessary. You can root the cuttings in pots, or directly into the ground soil outside. Maintain moist soil, and the stems should root within eight weeks.

The Shrimp plant grows quickly and will need pruning back heavily once a year to keep it in good condition. Pruning helps to maintain a neat-looking plant and also helps to encourage new flowering growth. Without pruning, you will find that your Shrimp plant gets quite leggy. Annual pruning is best carried out at the end of winter.

To do this, use a sharp shearing tool, and start at the outermost edge of the plant, cutting stems just a few inches from the ground. Work your way inward, leaving stems longer with every row. The stems at the center of the plant should be the longest, creating a conical like shape, which is how the plant naturally grows. Other than the annual pruning, you should remove dead or damaged stems throughout the year. You can also deadhead the flowers when they are spent to encourage new blooms, but in most cases, the flowers fall off by themselves and are replaced quickly with new growth. 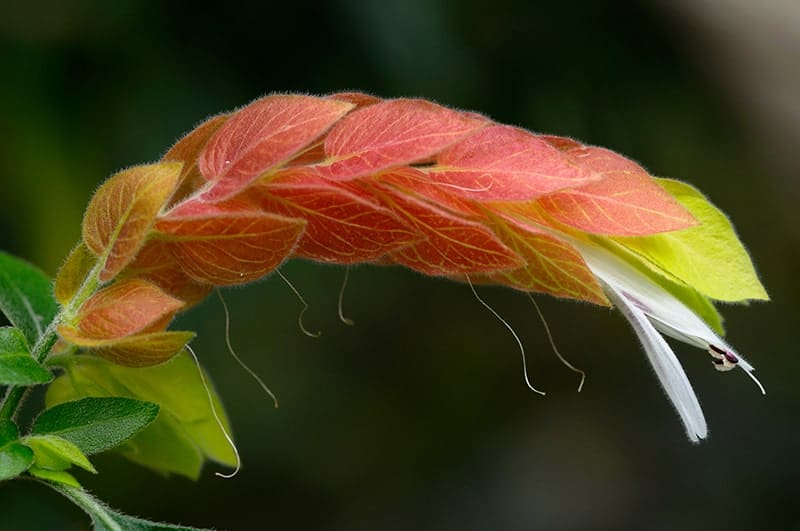 The flowers of this plant strongly resemble shrimp, hence the common name Shrimp plant. The large flower bracts arch into a curved shape and are a dark coppery pink at the top end, fading through to pale pink and eventually to white at the bottom end. They typically measure between three and four inches. The showy flowers, when grown outside, bloom 8-10 months a year. When grown indoors, this plant can flower all year long. The flowers are unscented, and are short-lived, though they are quickly replaced to give the impression of a continually abundantly blooming plant.

Shrimp plants are generally disease and pest free, though they are susceptible to red spider mites and other pests that commonly affect houseplants. More common problems are usually care-related and include the following.

Yellowing leaves. This is usually a sign of overwatering but can also be caused by underwatering. Analyze your watering routine to understand the problem.

Leggy growth. This is caused by too little light and too much heat.

Pale flowers. Pale flowers can be caused by too little light, as well as too much bright light. Strike a good balance with some direct light and some shade.

Pale leaves. Pale leaves usually indicate a lack of nutrients. Use a balanced liquid fertilizer to see if this resolves the problem.

Do you find it difficult to keep your Shrimp plant blooming year-round? Let us know how you care for it in the comments below, and don’t forget to share with this page with other exotic flower enthusiasts! 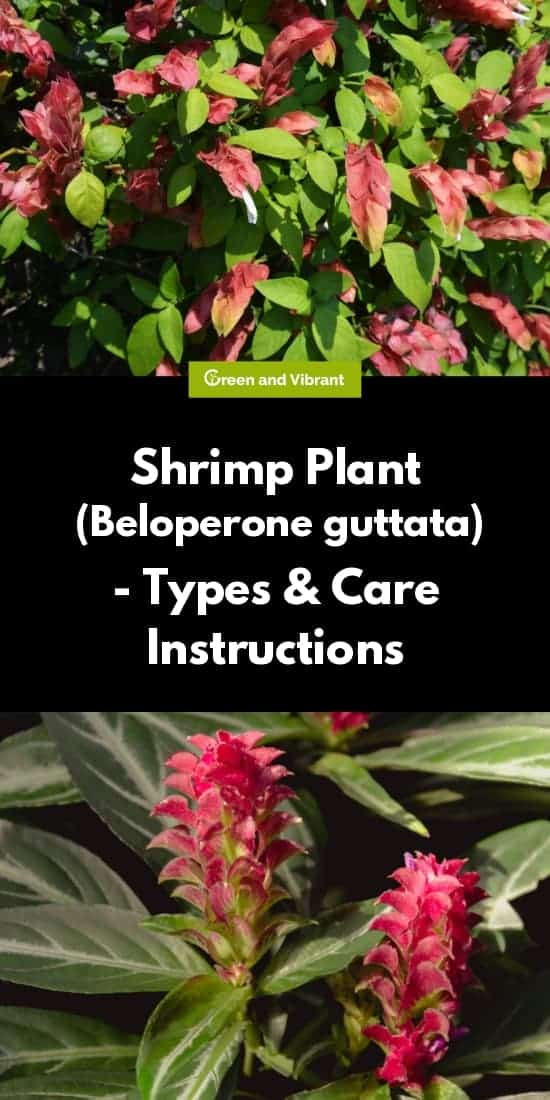