Pear trees are rewarding to grow, as many types can produce delicious fruits, and they have an ornamental beauty all year round. They look luscious in spring when they are in full bloom, then have a fresh appeal during summer when they are densely packed with vibrant green leaves. When fruiting, they have an interesting look with an abundance of heavy fruit dangling from the branches, and in fall, they look stunning with an array of warm-colored foliage that can range from golden yellow to deep red. There are three main categories of pear tree; Callery, European, and Asian.

These types of pear trees are small to medium in size, and they are deciduous. They are native to Vietnam and China, though they have become very popular in the United States, to the point that some of their cultivars have now become known as an invasive species in some regions. The ‘Bradford’ cultivar, in particular, is regarded as a nuisance, as it performs better than native trees, and is spread by birds who eat the fruits and then disperse the seeds in their droppings.

The tree is also problematic in many towns and cities because it was planted in urban areas where space was in short supply. It was deemed a good choice because of its narrow, upright growth, but over time these trees do spread their branches out wide. Improper pruning early in life has also led to much of these trees dropping their large branches after they reach 20 years in age, making them a nuisance in town and city landscaping. The fruits of these trees are small and not edible for humans, though they are loved by birds. Instead, these trees are cultivated for their ornamental beauty. 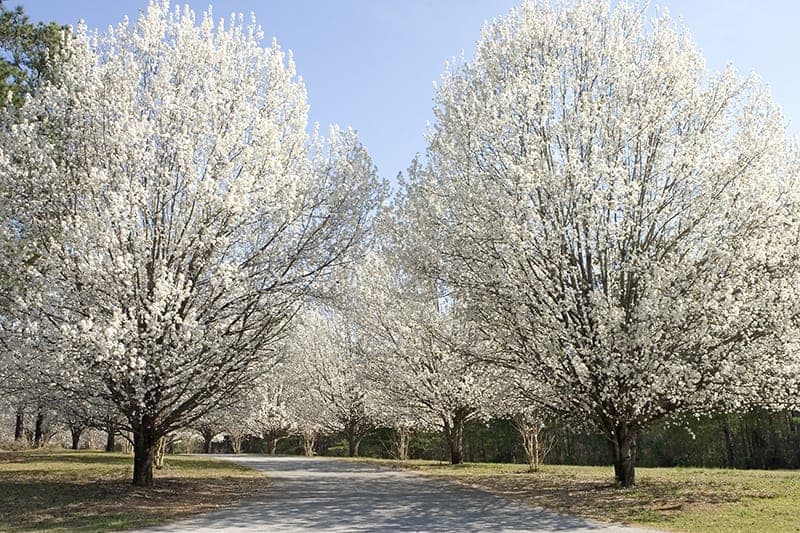 Mature Size: Up to 50 feet tall

This deciduous pear tree is an ornamental species, as the fruits are inedible to humans. It has an upright habit when young, but branches out sideways with age to give a strong, pyramid shape. The foliage is a broad oval shape and is thick and leathery with a lustrous, glossy finish. They appear in a deep, dark green, and then warm up with the arrival of fall to bright shades of red and orange before dropping to the ground.

This variety of pear tree is an early bloomer, with a mass of flowers arriving at the beginning of spring. The flowers each have five petals in an off-white shade, and they hang in dense clusters all along the lengths of the branches. Though these flowers put on an impressive show, many people find their scent unpleasant. This is a truly stunning tree in bloom, and it is easy to see why it is among the most popular varieties of Callery Pears. After the flowers fade, small fruits develop in their place, measuring less than half an inch across.

These fruits are a yellow-green color and are enormously popular with birds once they have softened later in the year. The seeds of the fruit get dispersed in bird droppings, and in part due to this, the Bradford pear tree has become invasive in many parts of the United States.

It is tolerant of all soil types and grows easily and is, therefore, outperforming many native plants and trees. In spite of this, this tree is still commonly cultivated for its ornamental beauty and has a life expectancy of around 20 years, after that time the tree becomes prone to breakage, and the limbs of the tree can quite suddenly snap off. This tree enjoys moist soil when young, but is drought-tolerant once established. It will grow in almost any soil type, even clay soils.

This pear tree is native to Europe and Southwest Asia, but some cultivars are now widely grown in North America and Australia. As a species that requires winter chilling to set buds, these are great trees for cooler climates, though they are not quite as hardy as apple trees. The fruits of these trees are edible, and have various uses such as fresh fruit, in cooking, and as canned fruit. Many of these cultivars travel well and have long lives when properly stored. Some of the most popularly cultivated varieties are the Conference pear, which is the most commonly cultivated pear in the UK for commercial use, and the Abate Fetel pear, which is the most popular cultivar in Italy. 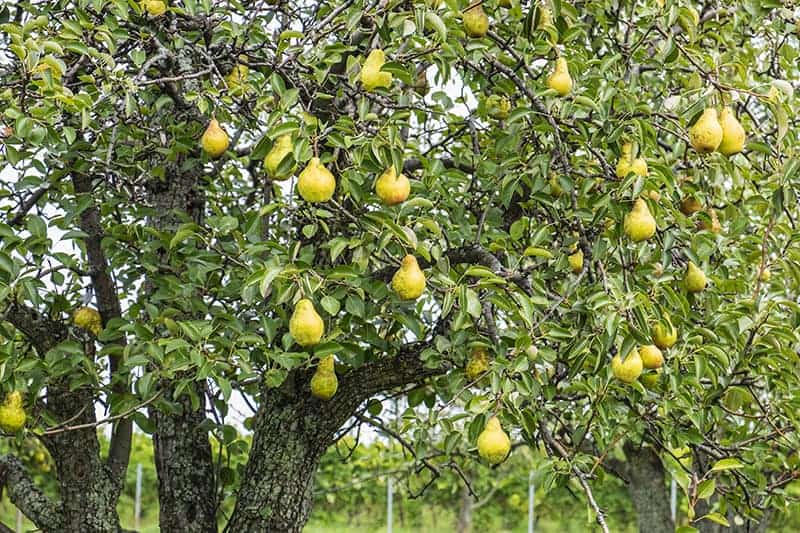 This deciduous pear tree has an upright habit that spreads horizontally once established, giving it a wide, umbrella-shaped canopy. It produces elliptical leaves in a glossy green, which develop to red and yellow late in the fall. Flowers bloom in the middle of spring, in a creamy white color. They appear on densely packed clusters that drape from the tree along the lengths of the branches. Flowers give way to edible fruits, with medium-sized pears that have fuzzy, cinnamon-colored skin. They have long necks and are cultivated for many uses. The soft flesh of the pears are sweet and juicy and are delicious to enjoy as a raw snack.

These pears also work very well in cooking and are commonly used to create pies and other desserts, or they can be canned to save for a later date. They have a long shelf life and can be kept for up to three months in storage, retaining their appealing flavor.

In order to produce fruits, this tree will need to be pollinated by another species that flowers during the same timeframe, as it is not self-fertilizing. Good options for this are ‘Anjou’ or ‘Bartlett,’ which should be grown in close proximity to the tree to ensure maximum fertilization. This type of pear tree grows easily in a full sun position in fertile soil. It prefers a sheltered position and a moderate amount of moisture. 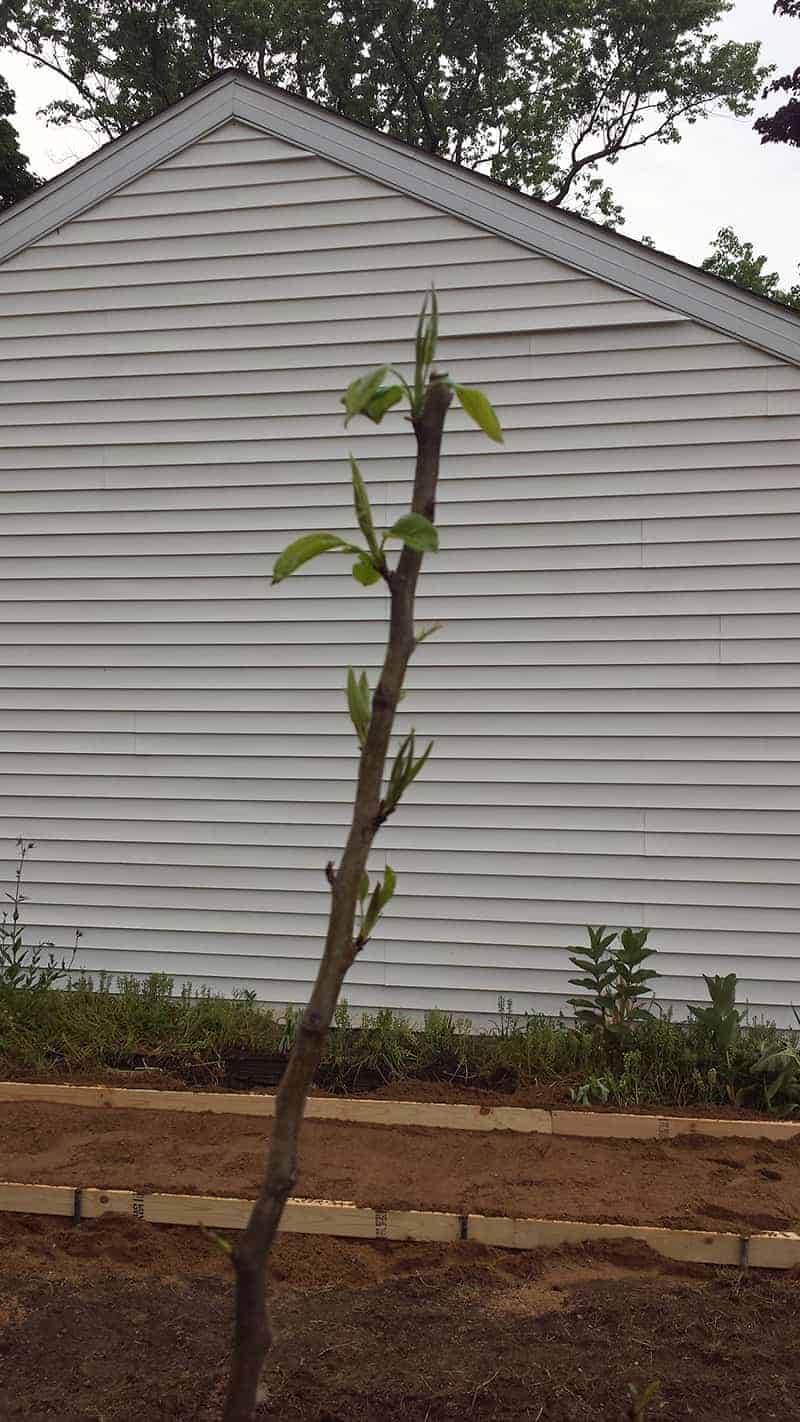 This type of pear tree is deciduous and has an upright habit with a wide spread. Its branches reach outwards so that the eventual width of the tree will be about equal to its height, at a maximum of 20 feet in either direction. This tree can also be grown as a dwarf pear tree; in that case, it is more likely to reach between 10 and 15 feet tall. The tree blooms in early to mid-spring, with creamy white flowers held in abundant clusters all along the lengths of the branches. The clusters dangle gracefully, making for a dramatic floral display.

The leaves arrive on the tree at around the same time as the flowers, in a deep and glossy green shade. By fall, the leaves warm up to bright hues of orange, red, and gold, before dropping to the ground. The flowers of this plant are highly ornamental, and once they have faded, they give way to large yellow-green fruits.

These pears are flushed with red on their skin and have white, crisp, and juicy flesh. They are delicious eaten straight from the tree or cooked. They are also good for canning. One of the reasons this variety of pear tree is so popular is the high yield of pears it produces. It is renowned for being a very productive pear tree, producing an abundant crop year on year. If you want to grow this tree to produce pears, you will also need to grow another pear tree close by, as the Harrow Sweet Pear is not self-fertile. Choose a pear tree that flowers during the same time frame to give your trees the best chance of fertilization, such as the ‘Moonglow’ pear tree.

This tree grows easily in a full sun position with a moderate amount of water. It prefers well-draining soil that is fertile and deep.

Asian pear trees are native to Eastern Asia. They produce sweet fruits that go by many names, including Asian pears, Japanese pears, zodiac pears, and apple pears. The term ‘apple pear’ is probably due to the fact that these pears more closely resemble the look of apples due to their round shape. The fruits are very sweet, and so are usually enjoyed as a dessert pear, though they are typically not cooked or baked because of their high water content. Instead, they are most commonly eaten raw, where their crisp and juicy flesh can be fully enjoyed. These types of pears are very different from the pear you would find on European pear trees, and they have an almost caramel-like flavor.

Asian pears can be categorized into two groups; russet pears and green pears. They can easily be identified by the color of their skin, with russet pears having tan-colored skin and green pears a yellow-green shade of rind. Asian pears have a good shelf life so long as they are properly wrapped and stored carefully. They have a tendency to bruise easily due to their high juice content, which spoils the fruit. Different cultivars of Asian pear trees can be found throughout East Asia, as well as other regions of the world, including Australia and the United States. These pears are quite expensive to buy, and so are not commonly enjoyed fruit for most people. Instead, they are often given as gifts or enjoyed on special occasions. They are usually served peeled in their raw form.

Asian pear trees are deciduous and can vary in height though they are typically quite small, at an average height of around 15 feet. They love the sun, though they aren’t heat-tolerant and fare best in moderately warm to cool climates. These trees are easy to grow, thriving in well-draining soil. They do have a habit of falling victim to various diseases such as fireblight, pear rust, and brown rot, as well as suffering from numerous pests. Due to this, they need to be watched closely and can become quite high maintenance. They will benefit from annual pruning to ensure the best crop yield the following year. 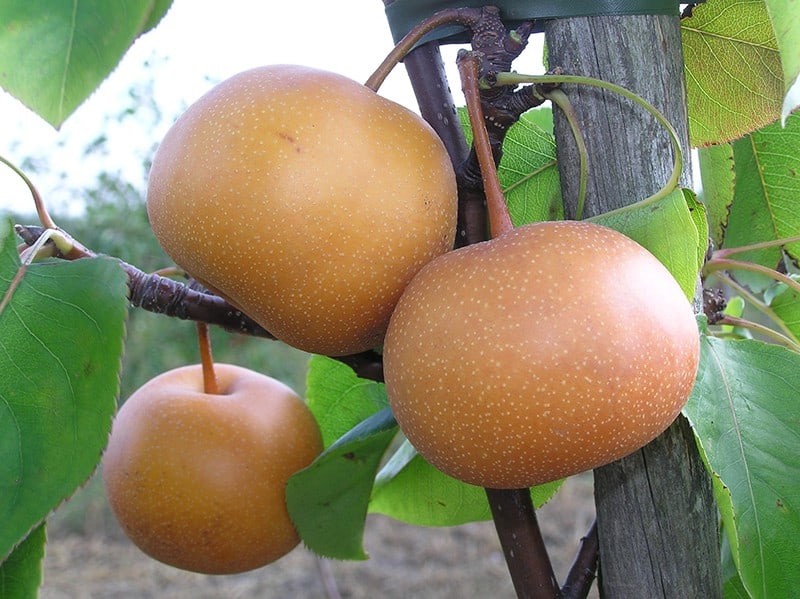 This popular pear tree produces dessert pears, on a deciduous, small tree. In spring, leaves emerge in an interesting copper shade, along with blossoms that bloom in mid-spring. As they develop, the leaves become a bright and fresh shade of green, before turning bright red in the fall. The ruffled flowers are white and bloom in heavy clusters that hang along the branches of the tree. Medium to large-sized fruits follow the flowers, which are round in shape, and golden-tan colored. They have a distinctive caramel sweet flavor, which is reminiscent of butterscotch and lends them perfectly for use in desserts and sweet dishes. The flesh of the fruit is a creamy white, very juicy, and has a crisp bite. These pears keep very well and can be stored for up to five months after harvesting.

The tree is known for producing a good crop yield, but it will need to be pollinated by at least two other types of pear trees in order to form fruits. Choose pear trees that flower at the same time as the Chojuro, such as ‘Hosui’ and ‘Moonglow.’

This tree is easy to grow, in a full sun position, with well-draining soil. 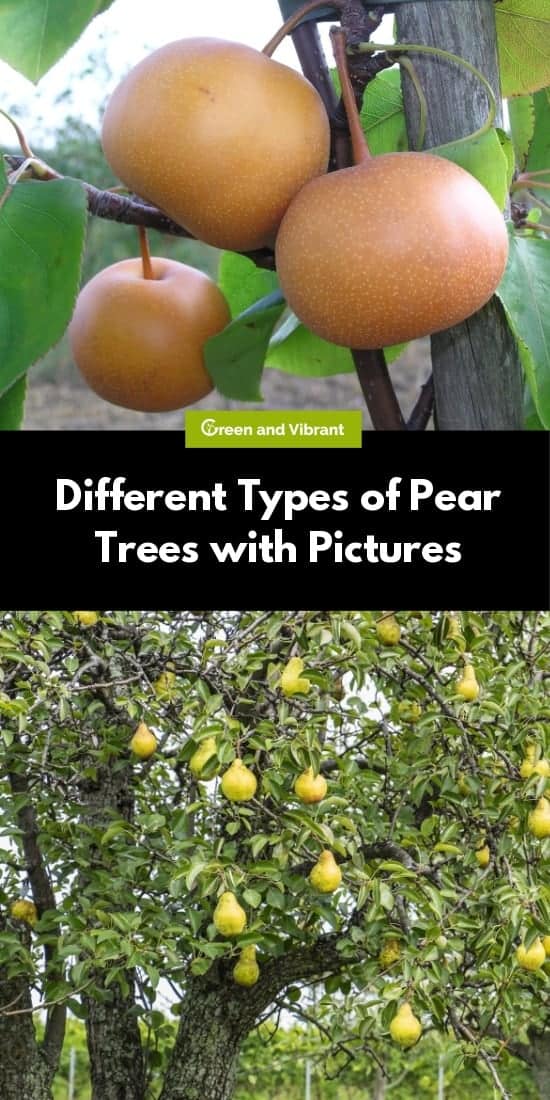