Where to Buy Dwarf Umbrella Trees

Dwarf umbrella plants can be grown either indoors or outdoors. For outdoor landscaping, umbrella plants thrive in zones 10-11 in partial shade. Indoors it prefers temperatures between 60 and 80 degrees Fahrenheit with indirect sunlight.

In order to provide the necessary drainage, pot your umbrella plant in sandy potting soil. General purpose potting soil will also work if it’s mixed with perlite or sand, humus or peat, and a pinch of agricultural lime in a 1:1:1 ratio. Indoor umbrella plants do best in a heavy-bottomed pot that offsets the plant’s height. They should be repotted every two to three years in a pot that’s two to three inches wider than its previous home.

For best results, allow your umbrella tree’s soil to dry out between waterings. Overwatering will lead to blackened leaves, while underwatering will result in wrinkled or wilting leaves. Use just enough room temperature water so that it seeps from the bottom of the pot. Empty any drainage so that the potted plant doesn’t sit in standing water.

Umbrella plants love humidity, so mist yours with warm water regularly or invest in a plant humidifier. Avoid positioning the plant near heaters, air conditioners, or vents that will dry the leaves out.

There’s no need to fertilize your umbrella tree during the winter, but a liquid houseplant fertilizer (10-10-10) during the March to September growing season will help it flourish.

Pruning is important for umbrella plants. Cutting just above the leaf nodes creates a squatter shape that resembles a shrub. For a tall tree, prune less frequently. Dead or dying leaves should be removed, and dying branches should be clipped to half an inch above the nearest healthy leaf or stem. Dwarf umbrella trees should be pruned similar to most trees — cut off a branch at the union of the branch and the main stem. If a main stem is too large, the stem can be notched at a leaf scar. New growth will appear. Then remove the large stem just above the new growth.

Dwarf umbrella trees grown indoors are vulnerable to two-spotted spider mites and aphids, both of which are repelled by neem oil. If the plant is attacked by aphids they will leave a sticky secretion behind, and this can impact the plant’s growth, so be sure to clean the leaves with a damp cloth. White mealybugs are also a concern, but can be addressed using a cotton swab dipped in rubbing alcohol.

The dwarf umbrella plant can fall prey to fungus, which causes leaf spots. A copper-based fungicide will kill the growth. Other diseases such as xanthomonas leaf spot and pseudomonas leaf blight are sometimes seen, and are best addressed by removing and discarding diseased leaves immediately. 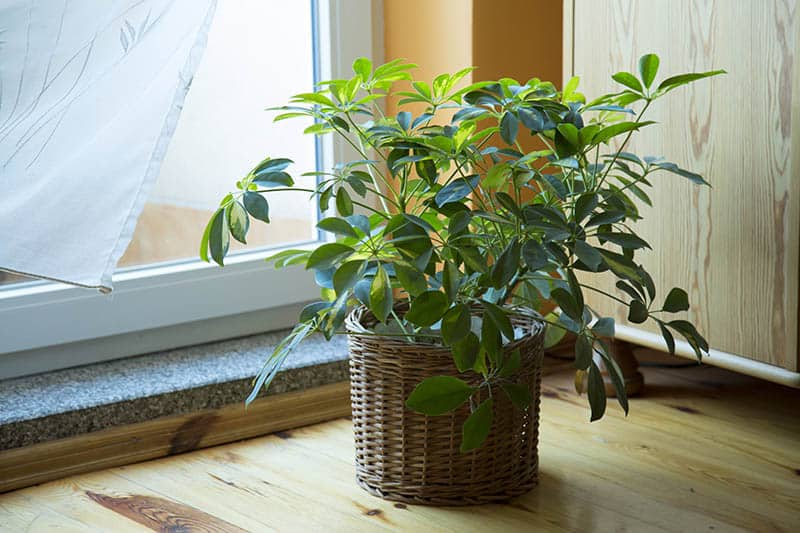 The Umbrella Plant is accepting of lots of conditions and will fare well in both bright and darker areas of homes. It will grow best in bright rooms, away from direct sunlight. If kept in these conditions, the plant should become bushy and tall. If kept in a darker room, it will continue to grow, though the leaves may be more spread out. A few hours each day of direct sunlight can be tolerated by the Umbrella Plant; however, too much sunlight will cause damage to the leaves.

The Umbrella Plant itself fares well in normal humidity levels found in homes and offices. However, insects love to make their home on the Umbrella Plant, and this is particularly a more prevalent problem in areas of low humidity. If you find that your plant is frequently suffering from an insect issue, you should try to raise the humidity levels. High humidity will not affect the plant’s health, but it will deter insects from setting in.

This plant enjoys a range of normal indoor room temperatures, from 15°C / 59°F to 21°C / 70°F, though it will not tolerate temperatures lower than 13°C / 55°F or higher than 24°C / 75°F. Sudden temperature drops should be avoided as these will lead to the falling off of leaves, so do not keep the plant near draughty windows or doors. The green varieties of the Umbrella Plant tend to fare better at the lower end of the temperature scale, while the variegated variety enjoys it a few degrees warmer.

To produce new Umbrella Plants from your existing plant, you will need to propagate it. These plants are renowned for being quite difficult to propagate, but it can be achieved with some close attention, determination, and practice. To do this, in the spring take cuttings of 2 to 6 inches in length. Trim off all but one set of leaves, and plant it in a similar soil to the parent’s plant, along with a rooting hormone, being careful to make sure the growing end of the stem is pointing upwards. Higher temperatures of up to 24°C / 75°F with a bottom heat source will likely result in more successful propagation.

The biggest problem preventing propagation is overwatering, which very easily leads to root rot. Be very conservative with your watering until the cutting has plenty of new growth, at which point you can treat it more like a normal Umbrella Plant.

When grown outside in warmer climates, the Umbrella Plant produces vibrant flowers in shades of red. The flowers grow on long stems high above the leafy part of the plant. As houseplants, these do not produce flowers. However, the Umbrella plant can produce some very interesting looking foliage, especially the variegated varieties which have various patterns of white and green on the leaves.

The Umbrella Plant needs to be re-potted every two years once it has reached maturity to maintain good health. Re-pot the plant in new compost or standard potting soil, in a heavy, sturdy pot to help prevent taller plants from tumbling over. Try to re-pot in the springtime, and avoid feeding the plant for around four weeks after repotting as the nutrients in the fresh soil should be plenty to sustain growth.

Is the dwarf umbrella tree poisonous?

Umbrella trees form crystals made of calcium oxalate, which can be fatal to household pets, including cats, dogs, and reptiles. Its sap is irritating to some people upon contact, and its leaves, flowers, and berries cause severe symptoms when eaten. These symptoms are not fatal but do include a burning sensation in the mouth, vomiting and drooling, swelling of the tongue, and airway obstruction. Place your umbrella plant where it can’t be accessed by children and pets.

What do I do if my dwarf umbrella tree gets too tall?

Umbrella trees respond well to pruning. Cutting the top back will feel extreme, but will quickly result in fresh new growth and a bushier, fuller plant.

Where do umbrella plants originally come from?

The umbrella plant originates from tropical rainforests in Australia, New Guinea, and Java. In nature, the flowers grow at their tops and bloom for several months. People who live in warm climates can grow them outdoors to enjoy their decorative appearance, but because they can be aggressive, there are some areas, including Florida and Hawaii, that advise against it. 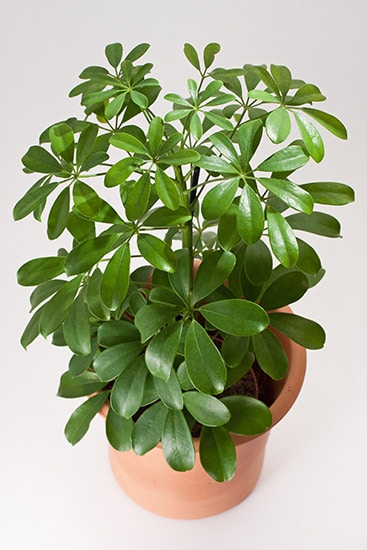 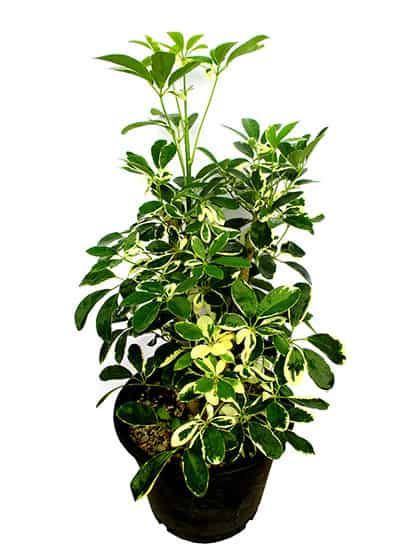 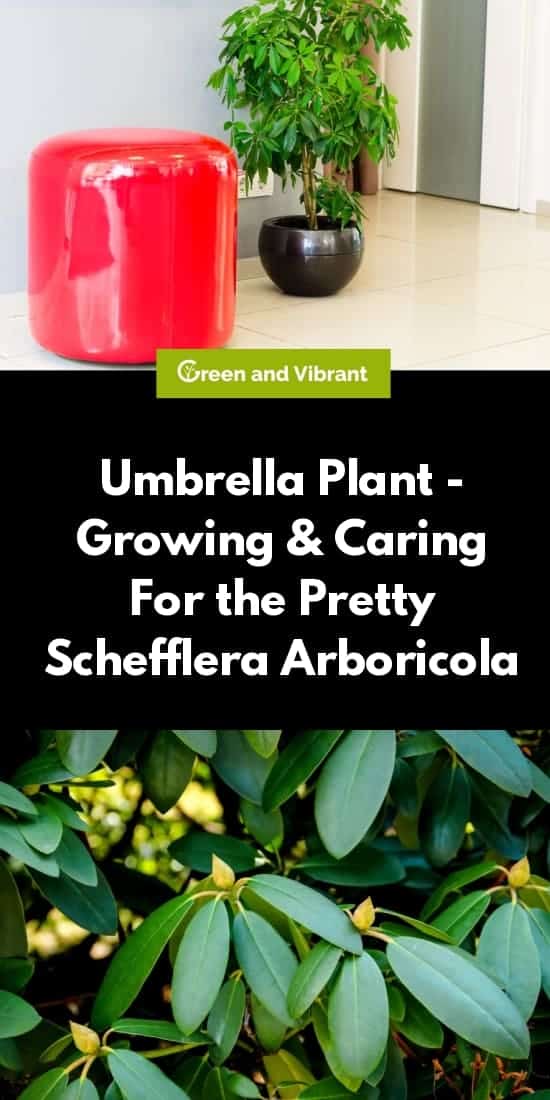