Mammillaria is a genus within the Cactus family, which comprises over 300 varieties. The name ‘mammillaria’ comes from the Latin word for ‘nipple,’ which these cacti are said to resemble. Some types of mammillaria are extremely common and are popularly kept as houseplants or grown outdoors in warm climates. There are also some rarer varieties that are in demand with Cactus collectors.

Some varieties of Cactus include the following. 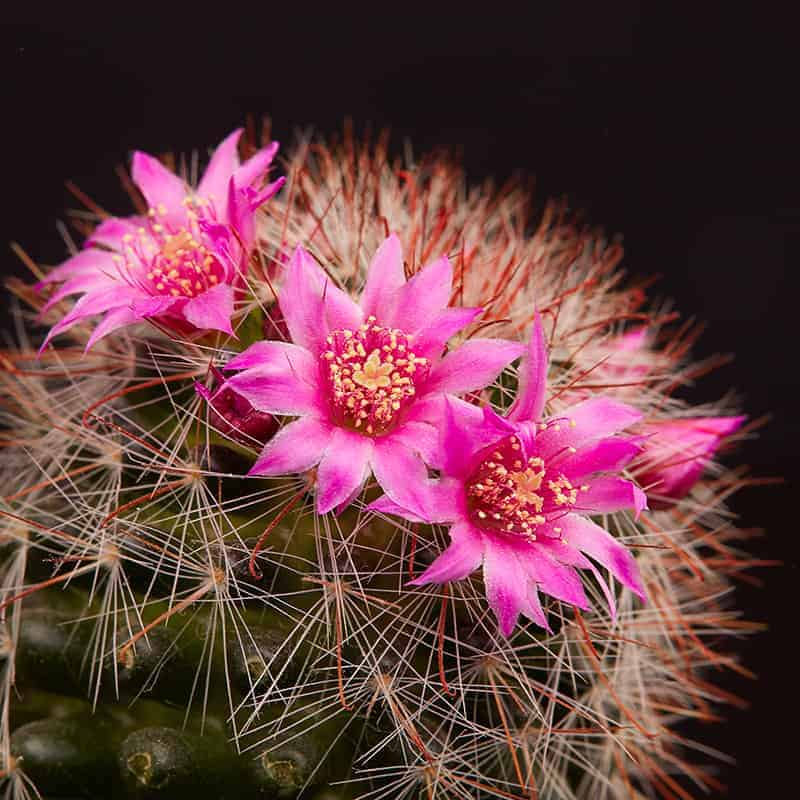 This variety is a critically endangered species that is native to a small region in Mexico. It has clustered globular stems which feature fluffy areoles when young. These develop as the plant matures, into red-tinted spines. The stems can grow up to 3 inches in length and can bear flowers in a circular pattern around the stem tip. Flowers are usually pink or purple in color, measuring around two-thirds of an inch (Royal Horticultural Society). 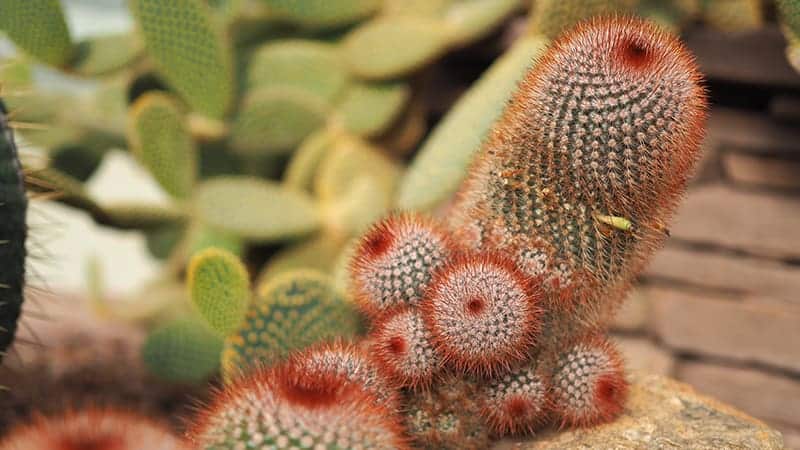 This plant is commonly known as the spiny pincushion cactus. It produces clusters of column-shaped stems that are covered in pink spines. It blooms in early spring with bright pink funnel-shaped flowers (Gardeners’ World). 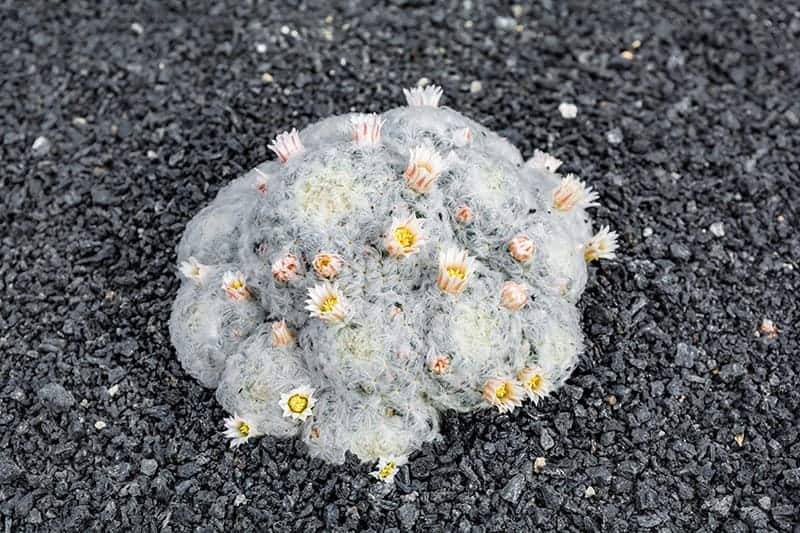 This cactus is commonly referred to as the powder puff pincushion, thanks to its white hair-like spines that cover the cylindrical stems to give the plant a soft and furry appearance. This mammillaria variety can grow up to 5 inches tall and has a clumping habit. Flowers vary in color but are typically creamy pink or yellow. This plant is a protected species in Mexico, making it illegal to collect wild specimens. 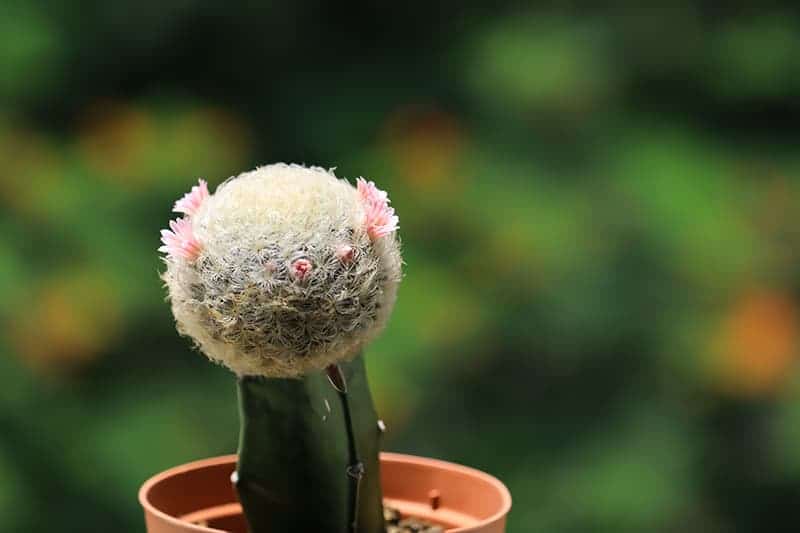 Native to Mexico, this plant is more commonly known as the feather cactus. The spherical stems of this plant are covered in ‘feathers’ made up of fluffy white spines. While this plant looks soft and cuddly, the downy exterior is hiding sharp spines that lay just under the surface. Besides giving the plant a very unique look, the feathers also offer protection for the cactus, keeping it sheltered from too much light or heat. This means that the mammillaria plumosa is more suited to direct sunlight than many of its relatives, as it has inbuilt shade. 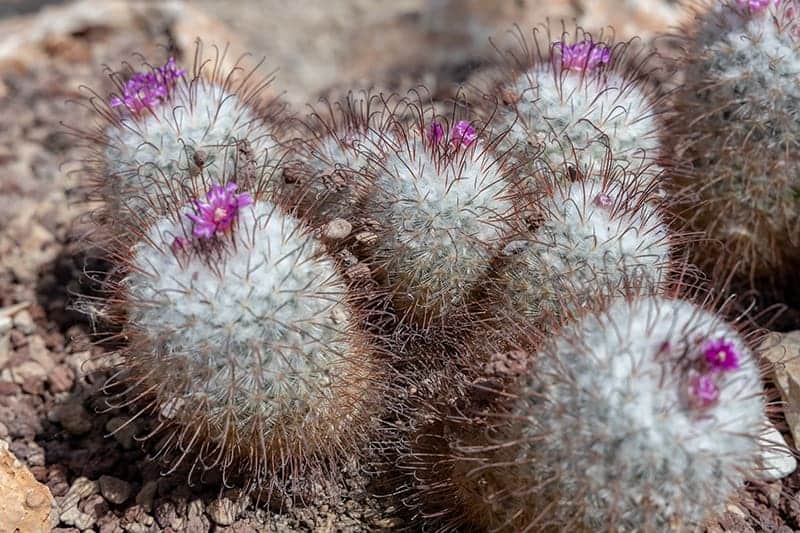 Commonly known as the silken pincushion, this cactus is considered a vulnerable species where it grows in its native home of Mexico. The wild population of the plant has dwindled due to illegal collecting. The cactus takes a cylindrical shape with a rounded top and tends to cluster en masse to form huge cacti mounds of up to 3 feet wide. The individual plants typically measure up to 8 inches tall and 2.5 inches across once mature. The pale green stems are covered in downy white hairs and longer brown spines. 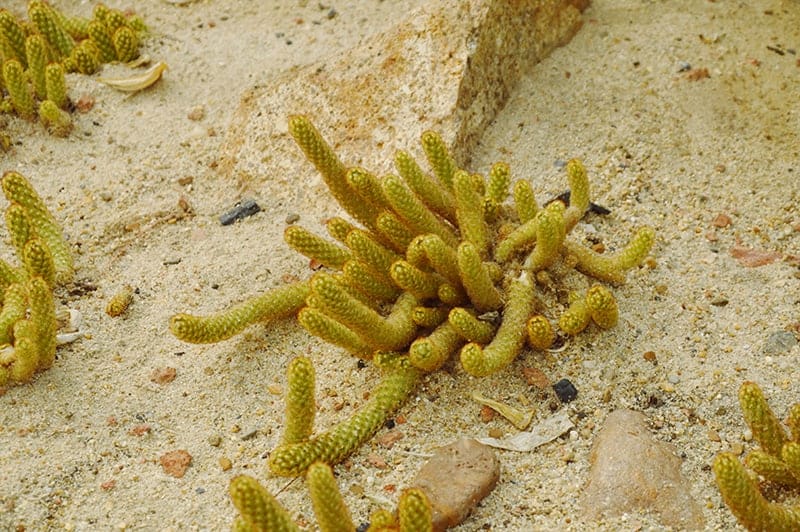 Also known as the ladyfinger cactus, this plant takes the form of long cylinders, which are dark green and can measure up to 8 inches in height. The stems are covered in orange star-shaped spines, giving the plant a lacy patterned effect. This plant is easy to grow and ideal for beginner gardeners. It readily forms clumps, but if you wish to separate these to propagate new plants, remember to use protective gloves or tongs to prevent injury from the spines.

Caring for Your Mammillaria 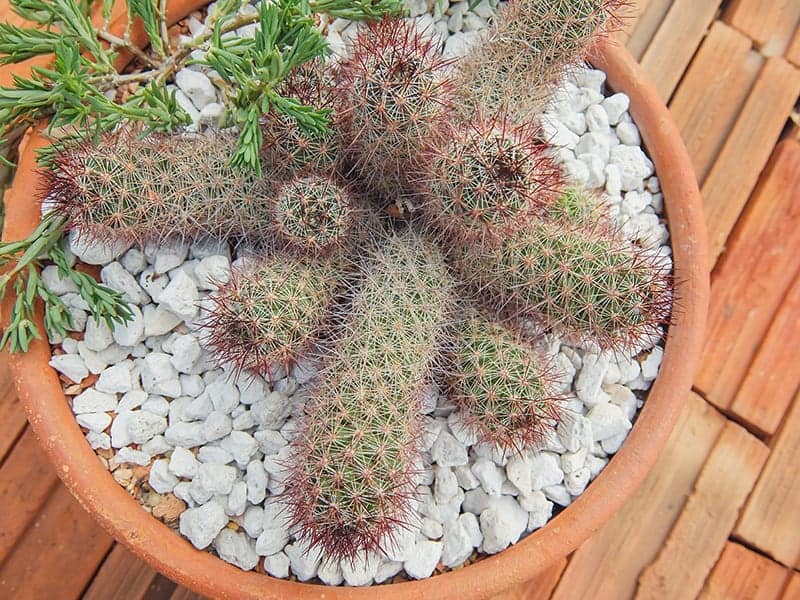 As is common with cacti, this plant is fairly drought tolerant and can survive short periods without water. It should be watered whenever the soil around it has dried out, and at this point, water generously so that all of the soil gets moistened. Mammillaria growing outside will be more forgiving of a sporadic watering pattern, as their root systems aren’t confined to a small pot.

These plants should be watered regularly during spring and summer months, but cease watering entirely with the arrival of fall. Rainfall, even if very minimal, will be enough to sustain these plants during their dormant period.

For indoor mammillaria, you will need to be a little more careful when watering. They will quickly perish if overwatered, so be careful not to water too often. The best practice is to dip your finger into the soil to check for moisture. If the soil is dry, you can add water, but if in any doubt, then always skip watering and let the soil dry out a little more.

During winter, the plant will enter dormancy and won’t require any moisture during this time. You can opt to entirely ignore the plant during the dormant season, or some people prefer to occasionally mist the soil so that it isn’t bone dry.

Overwatering is always more problematic than underwatering when it comes to mammillaria, so the best thing you can do is offer a slightly neglectful watering schedule. In order to help prevent overwatering issues, a well-draining soil is essential for this plant. This goes for mammillaria planted both indoors and outdoors. You can use pre-mixed cacti potting soil or create your own from a selection of different ‘ingredients.’ 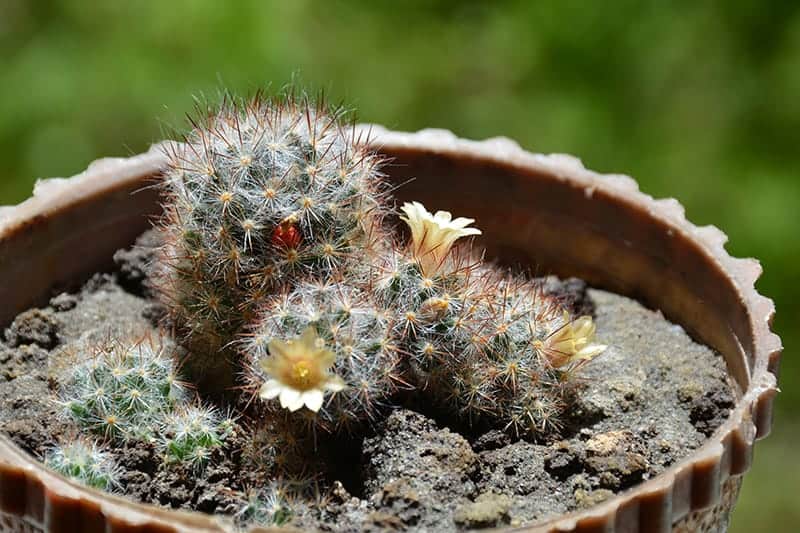 These cacti like plenty of bright indirect light, but cannot tolerate intense sunlight for too long. When grown as houseplants, they work well on windowsills as long as they aren’t positioned in front of all-day sun. They can cope with around 4 hours of direct sun each day, but this should be in the morning when the light is less intense. Ideally, set your mammillaria in a spot where it gets the morning sun and is well lit for the rest of the day but not in direct sunlight. I

f planted outside, position the plant in a spot where it is partially shaded, ideally with a light canopy overhead, which will allow for dappled sunlight to reach the plant. This will help to prevent the plant from getting sunburned, which turns the leaves yellow, while also ensuring the mammillaria gets sufficient light.

Mammillaria makes ideal house plants because they thrive in temperatures around 70ºF, which is the average room temperature in most homes. During the plant’s dormancy period, it prefers a cooler climate, and so can be moved to a lesser-used area of your home where heating is not kept on continually. The ideal winter temperature for mammillaria is between 60 and 65º F. You could position it in a spare bedroom, or alternatively, close to a window so that it benefits from some of the cool air.

Mammillaria plants can be grown outside all year round in some climates. They are hardy through USDA hardiness zones 8-10 and are commonly grown in rock gardens in these regions. Experiencing a cool period during dormancy encourages the plant to flower the following season, so if you’re keen to witness your mammillaria in bloom, then you’ll need to pay attention to its winter location.

If you keep your mammillaria indoors because your local climate is too cold for the plant during winter, you could offer a combination of indoor and outdoor care; housing your cactus inside during the cooler months, and outside during the summer. Mammillarias, which experience outdoor summers, typically thrive to a greater extent than those kept inside, so do get your cactus outside when possible. 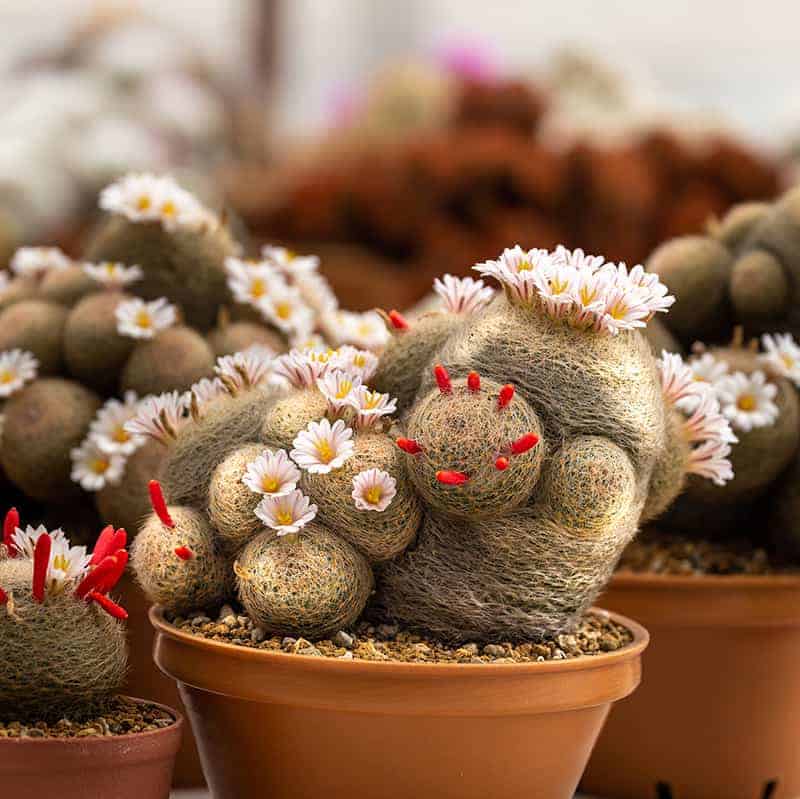 These plants like to be kept in dry climates and can struggle when kept in humid conditions. For this reason, do not keep mammillaria house plants in bathrooms or kitchens where humidity is naturally higher. Also, refrain from misting these plants or keeping them in a room that has a humidifier. It is best to group cacti and succulents together and separate them from humidity loving plants. This will help to ensure the moisture content around them does not get increased.

Mammillaria is best propagated from offsets. These are baby plants produced by the mother plant, which appear in clusters around its base. Some people like to leave the offsets in situ, giving the plant a large shallow container that they can continue to fill.

If you would prefer to create separate plants from the offsets, you can remove them from the mother plant and repot them in their own containers. To do this, remove the offset by gently tugging at it. They usually come away quite easily, but if not, you can help it along with a sharp and clean knife.

Once removed, keep the offset on a paper towel for a few days while the wound scabs over. This is a necessary step to prevent the mammillaria from rotting in its own moisture when you plant it in its new potting soil. Once the wound has a new layer of thin ‘skin’ over it, it is ready to be potted up in some fresh cacti potting mix.

Mammillaria prefers small shallow dishes where they can become quite snug and rootbound. Water the new plant thoroughly and then continue with normal care. 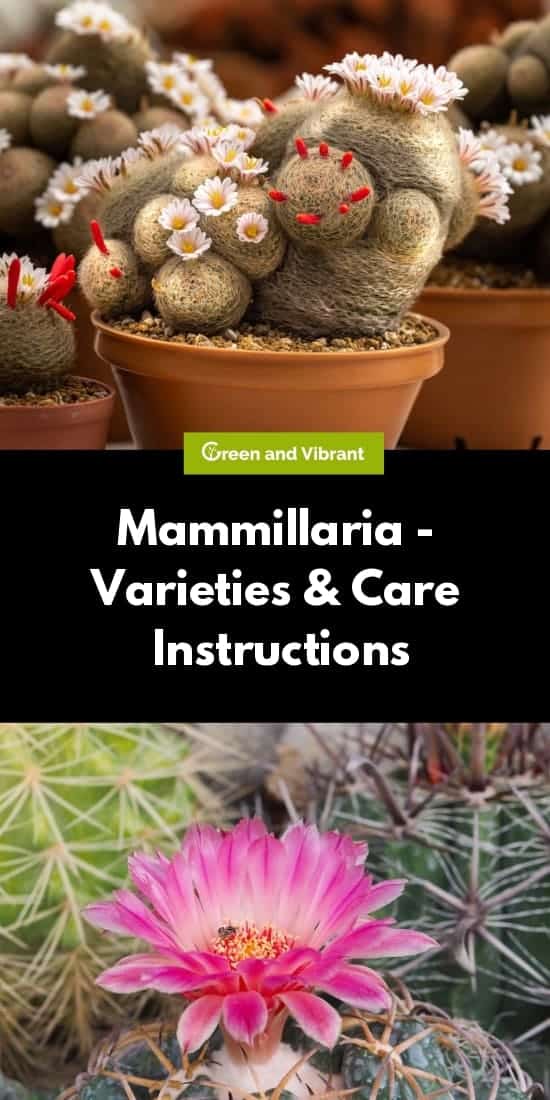