Agave attenuata is a large evergreen succulent that is commonly known as fox tail agave, which is a reference to its striking flower stalk. The flower is actually a raceme, which appears in the summertime, growing high above the foliage of the plant to a height of up to ten feet. It takes on a dramatic arc shape, with its tip pointing back down to the ground. The raceme is thick and sturdy and covered in tightly packed tiny white and yellow-green flowers.

The plant doesn’t flower often, and in fact, most rosettes will only flower once during their lifetime. The plant may take many years to produce the showy raceme it is renowned for, with an average flowering age of around 10 years.

The foliage of the plant forms a rosette shape made up of long narrow gray-green leaves. Each leaf can reach up to 4 feet in length, and will gently arch backward at the tip to give the impression of a giant flower opening up to the sun.

Given the right growing conditions, this is an exceptionally easy-care plant that requires little attention. Its size and uniformity make it a real show stopper, even when the flowers are not present (Missouri Botanical Garden).

Some other varieties of the fox tail agave include the following. 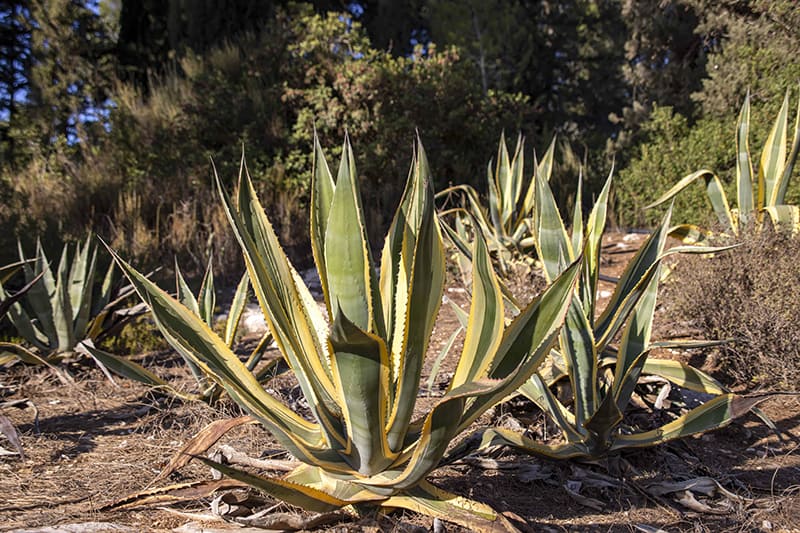 This variety of fox tail agave is commonly known as lion’s mane agave, and it’s easy to understand why upon viewing the plant. Its pale green leaves feature vertical stripes of yellow, which give the impression of a lion’s mane when the leaves are packed into a rosette shape. This plant has similar care requirements to the fox tail agave but is less likely to enjoy partial shade. To maintain the variegated pattern, it is best to keep this plant in a position of full sun.

This fox tail agave goes by several other names, including ‘Boutin Blue.’ It has wide blue-green foliage and is slightly more tolerant of cool weather than its relatives. It is hardy through USDA hardiness zones 8 to 12.

This agave has variegated leaves, which are gray-green in the center, and then fade out to a paler green before merging into creamy yellow on the leaf margins. Foliage develops from a chunky central stem, which typically grows to 4 or 5 feet in height.

Caring for Your Foxtail Agave 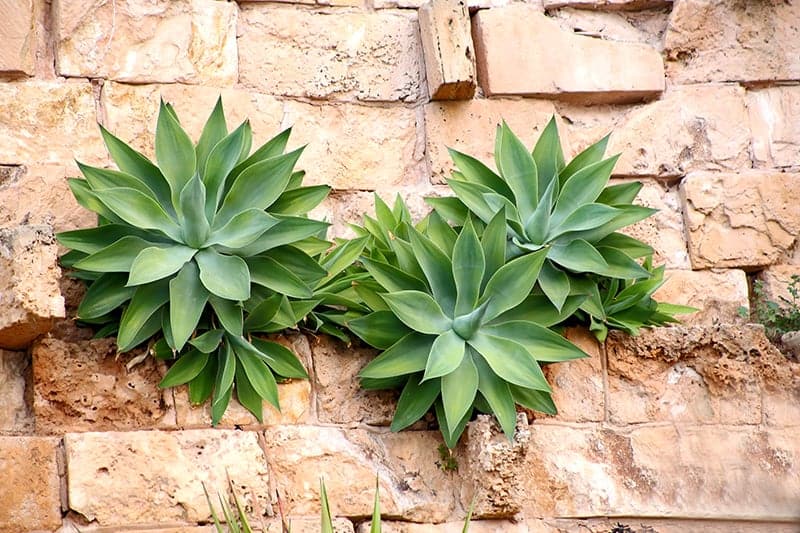 This plant can be grown directly in ground soil, or in container pots. Containers are recommended if you expect to need to move your pot, for example, to overwinter it, as containers offer portability. Wherever you plant your fox tail agave, you will need to ensure it has good drainage. Always use a container with drainage holes, and grow the plant in well-draining soil.

The fox tail agave does not like to sit in soggy conditions, so a well-draining soil is vital to maintaining its health. A soil with a sandy or gritty texture will be best for this plant. You can buy a pre-mixed cactus and succulent soil, or make your own by combining soil, sand, and perlite. When planting in the ground, fox tail agaves should be planted at a distance of 8 feet from each other to ensure they have enough space to spread.

Like many succulents, the fox tail agave is drought tolerant and can withstand long periods without moisture. However, it will be at its best when it receives regular water. The amount of light your plant gets and the temperature it is in will have a large impact on how often it needs to be watered.

Mature fox tail agaves in a full sun position during the summer should be watered generously around once each week. This would need to become much less frequent during the winter months when in most regions, the plant would be able to survive on rainwater alone.

If you are concerned about overwatering the plant, then you can wait for it to show signs of dryness before watering it. As well as checking the soil, you can also check the foliage of the plant for this, as its leaves will shrink and shrivel when it is short on moisture.

If you notice this happening with your fox tail agave, you should give it a liberal watering. If the plant has sufficient water, its leaves will appear to be juicy and plump. If you do happen to overwater the fox tail agave, then you shouldn’t worry too much, as this plant is actually well equipped to deal with overwatering, and won’t easily succumb to root rot like many other succulents.

That being said, the plant does have low water needs, so don’t make a habit of giving it too much water. The best way to water this plant is at the soil level, as it doesn’t like moisture sitting on its foliage. 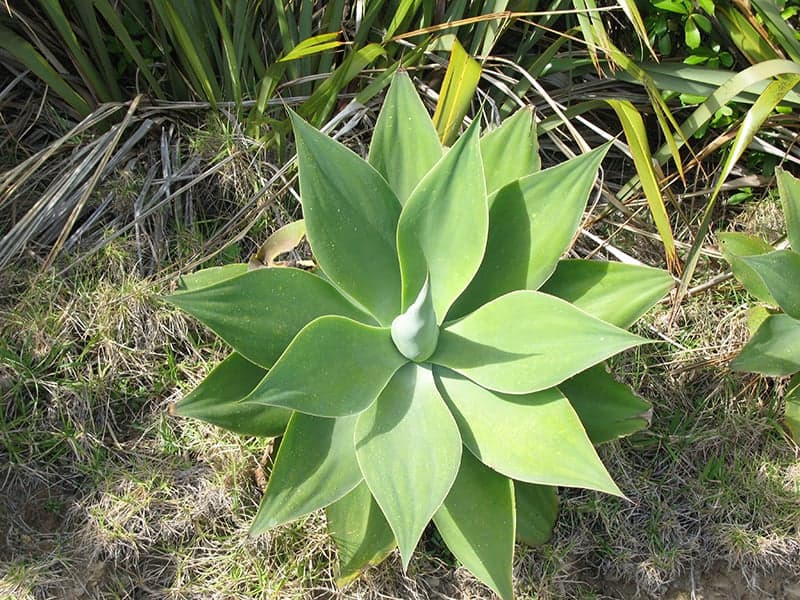 The fox tail agave is a full sun plant and thrives in these conditions. It can acclimate to partial shade, especially if the shade is during the afternoon, as the plant can struggle with excessive heat and might appreciate some respite during the hottest part of the day.

If you have kept the plant in partial shade and wish to move it to a full sun position, then you should do so gradually, increasing the hours of direct sun it gets over the course of a few weeks. If suddenly moved into a different lighting position, the plant could go into shock and lose its leaves. 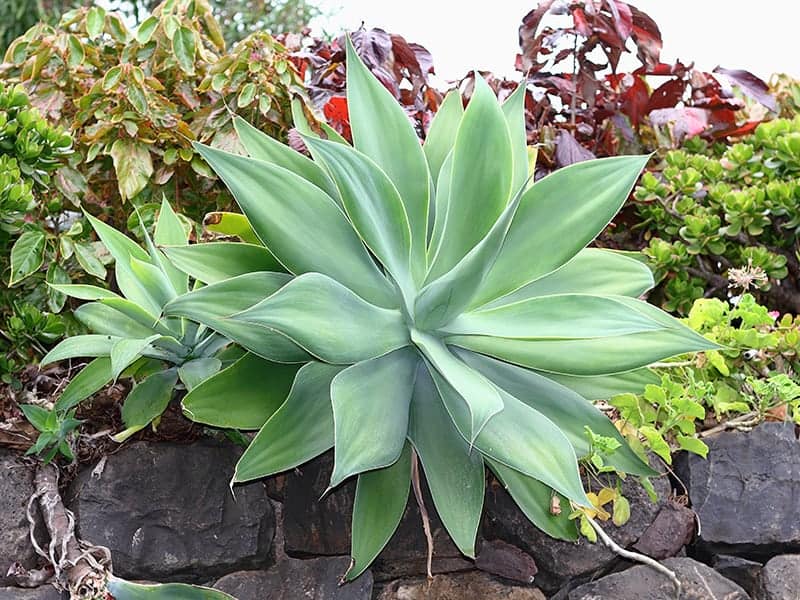 One option if you live outside of zones 10-12 is to keep your fox tail agave in a pot and move it outside during the warm summer months, and then transfer it inside or to a heated greenhouse to overwinter it. The plant can survive in temperatures as low as 28° F, but it will not tolerate such low temperatures for sustained periods of time.

The fox tail agave does not rely on regular feedings to thrive, and in fact, can live happily for many years with just the nutrients contained in its soil. If you do want to fertilize the plant, use a diluted liquid fertilizer during the summer months, and refrain from fertilizing at all during winter. Be careful not to apply fertilizer too frequently as this can cause more harm than good in this plant.

One thing you can do to ensure your fox tail agave receives the necessary nutrients is to refresh its soil every few years. Nutrients in the soil can become depleted over time, so refreshing the soil by adding a top layer of organic compost, or repotting your plant with completely new soil, will be more than enough to keep your fox tail agave from becoming nutrient deficient.

The fox tail agave can be propagated easily when it produces suckers. These are ‘babies’ that grow from around the base of the plant, which typically appear on mature plants in spring or summer. Once they are a few inches long, you can remove the suckers with a clean and sharp knife, potting them up in their own cactus or succulent soil mix in a small pot. If you’d rather not propagate the suckers, you can leave them in place for the plant to grow in clusters.

If you are growing your fox tail agave in a container, then it will need to be repotted around once every two years. This should be done in spring or early summer to minimize stress to the plant.

To repot the plant, select a new container just one or two inches larger in diameter than the current pot, and prepare the pot by filling the bottom with fresh soil. Ease the fox tail agave out of its pot by gently squeezing and turning it. Remove as much soil as you can from the root ball without disturbing the roots too much, then lower it into the new pot, filling around it with more new soil.

Ensure the plant sits at the same level in the new pot as it did in its previous pot, press the plant in, and water it generously. Fox tail agave plants have quite a shallow root structure, so they are well-suited to more shallow containers. 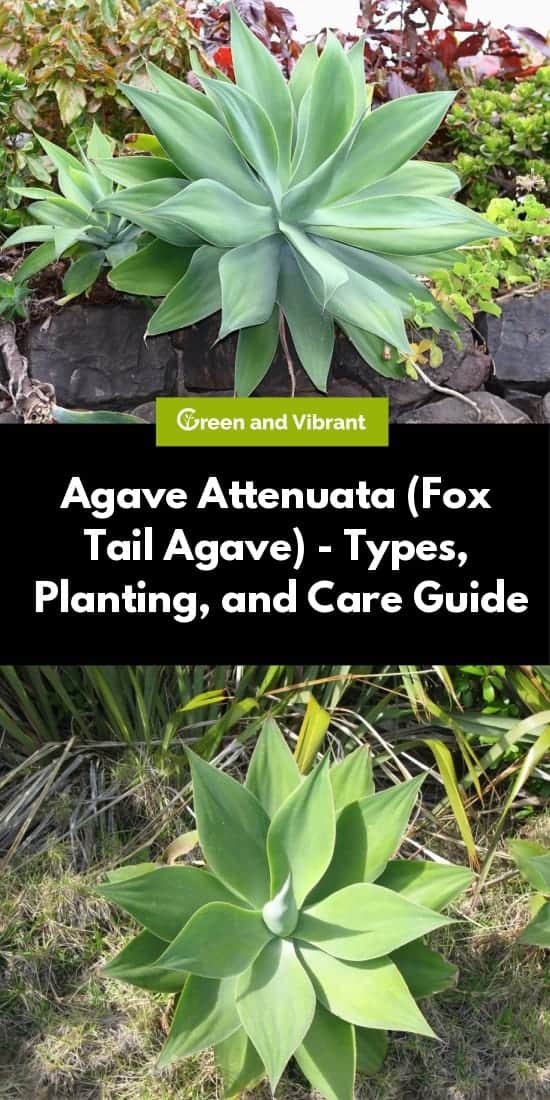