Holly trees and bushes encompass more than 400 plant species. The majority of these are dioecious, so they require both a male and female plant within pollination distance of each other in order for the female to produce fruits. Holly can be evergreen or deciduous and range greatly in size and shape.

Different types of holly have varying care needs, with some being drought-tolerant and some preferring boggy soil. If you’re looking for a holly plant for your garden, read on to learn about some of the best types of holly bushes and trees available for a range of different climates.

This showy holly plant takes the form of a large evergreen shrub, with a mature height of between 15 and 25 feet. The foliage grows from dark purple stems, and is small, glossy, and very spiny, like a hedgehog. Foliage is dark deep green, with a creamy white margin around the outer edges.

Tiny white flowers appear on this female holly bush in the spring, which will develop into bright red round berries in the fall if the blooms were pollinated by a male holly bush. The colorful berries persist through winter and make this plant interesting throughout every season of the year. The berries should not be ingested and can cause stomach irritation if eaten.

Hedgehog holly can adapt to a partially shaded position, but variegated varieties like this do tend to perform better in full sun. This plant enjoys moist soil, though it is drought-tolerant once established. This bush is easy to take care of and makes a wonderful addition to the winter garden. It has won the Award of Garden Merit from the Royal Horticultural Society (Royal Horticultural Society). 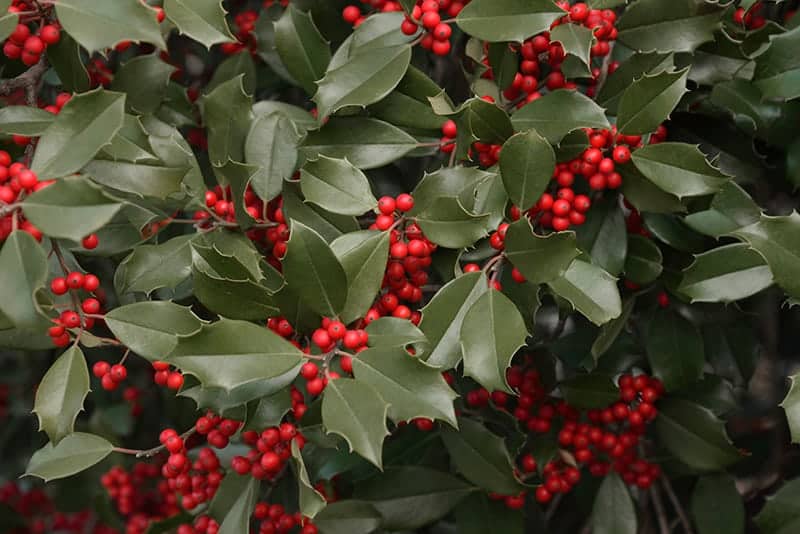 Mature Size: Up to 30 feet tall

This holly plant is native to the central and eastern United States, and has an upright habit which grows to take the shape of a tall pyramid. The tree is densely branched and has a beautiful symmetry to it. The foliage of the plant has a leather-like texture, is dark green, and has moderately sharp spines. In spring, an abundance of creamy green small flowers appears, which will develop into bright red berries on female trees.

Like all holly plants, the American holly tree is dioecious, which means that a plant will either be male or female. Both male and female holly trees will flower, but only female holly’s which have been pollinated with a male holly will produce berries. The berries are a food source for birds, but those which do not get eaten will persist through to winter, providing vibrant color to the winter garden.

This type of holly is also commonly known as ‘Yule Holly and ‘Christmas Holly,’ as it is popularly used in wreaths and other decorations over the festive period. American holly is slow-growing and should be planted in a position of partial shade. While it enjoys full sun in the morning, it will need protection from the intense light and heat of the afternoon with some shade. It needs moist soil to thrive and shouldn’t be allowed to dry out. 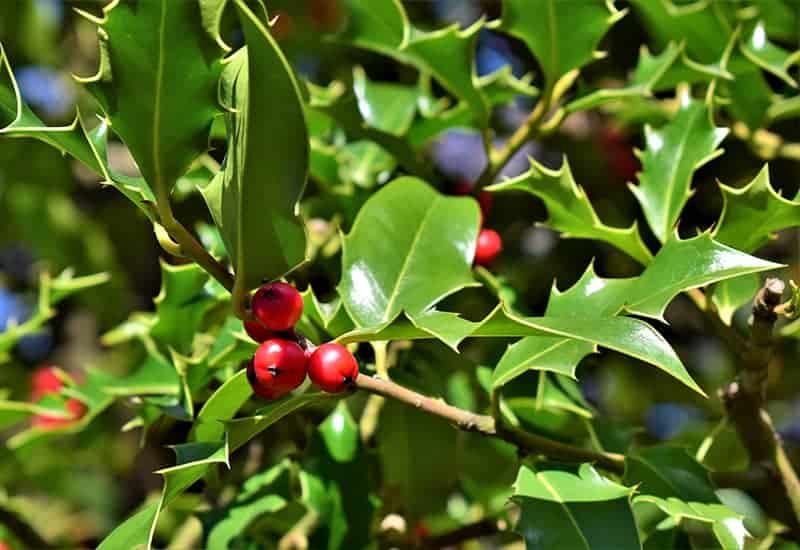 This compact holly bush forms a neat pyramid shape, looking pruned and well-kept with no effort at all. At a mature height of between six and ten feet, with a spread of between four and five feet, this shrub works well as hedging and offers year-round interest. The dark green spiny leaves have a glossy texture and keep their color throughout every season.

This plant is a female species of holly and will need to be pollinated by a male blue holly in order to produce fruits. Any variety of male blue holly (Ilex x meserveae) can be used to pollinate the red beauty holly, which will result in juicy round red berries. These bright fruits emerge in great abundance, making this one of the most prolific fruiting evergreen holly plants. This shrub has a vigorous growth habit and will thrive in a wide range of soil types, though it prefers a well-draining and slightly acidic soil. 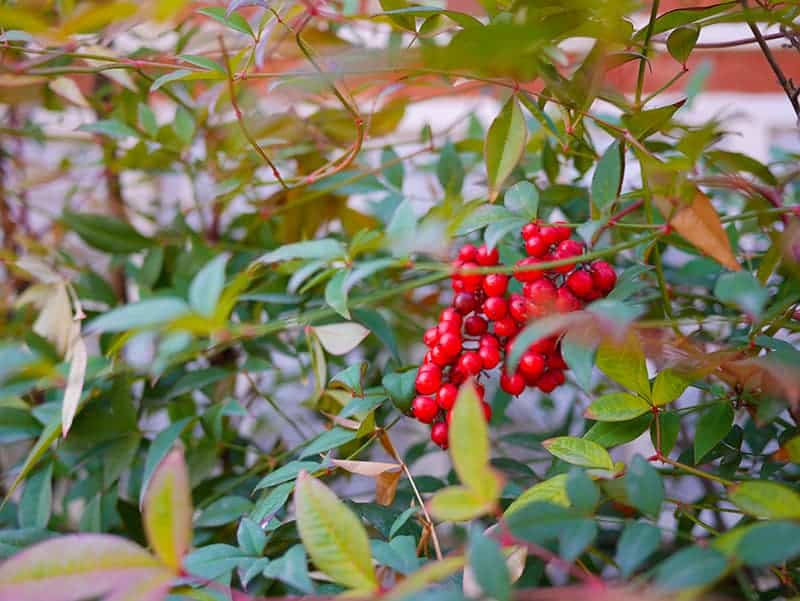 Mature Size: Up to 15 feet tall

Also known as ‘meadow holly,’ this is a loosely branched tree that forms a wide, open, rounded shape. It is a deciduous plant, losing its leaves at the end of fall to reveal a skeleton of silver-gray branches. The foliage is quite large, around three inches in length, and is ovate with toothed edges. Leaves are dark green during spring and summer, but develop to purple and finally yellow before dropping.

With the arrival of spring comes a mass of tiny creamy green flowers, which on female plants will develop into bright orange-red berries if pollinated by a male holly. The berries persist all through winter, looking exceptionally striking on the skeletal frame of the tree once all the leaves have dropped. Native to the US, this plant has a good tolerance of wet and soggy soils, so it is ideal for planting in boggy soils or along streams and riverbanks. Due to its ability to cope with wet soil, it is one of the few holly plants which do not require well-draining soil. 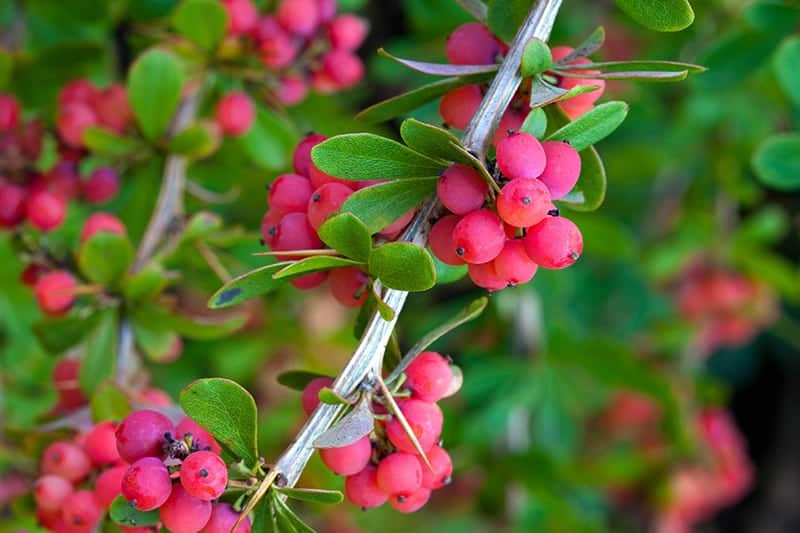 This evergreen holly has an upright habit and dense growth pattern and can take the form of a small tree or large shrub. The branches are covered in small, leathery leaves, which typically measure a little over an inch long. They are dark green, with a glossy finish. Both male and female holly plants will produce an abundance of greenish-white flowers in spring, but only those on a female holly that have been pollinated by a male will develop into showy berries.

This is an incredibly decorative type of holly, the winter branches of which are commonly used as decorating throughout the festive season. The branches and twigs were also utilized by American Indians since they contain caffeine. These were brewed to make teas, consumed in large quantities, and then vomited back out. This is where the holly gets its botanical species name of Ilex vomitoria. This plant is tolerant of a wide range of soil types and will thrive in both wet or dry soils. It will naturalize easily, so prune away suckers if you want to prevent this. 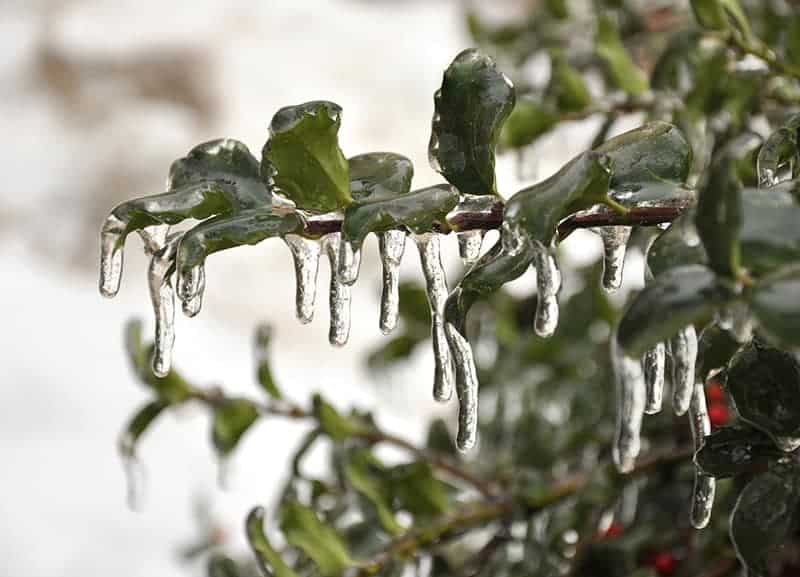 This female holly has a vigorous growth pattern, which forms a compact pyramid shape. It has dark green, ovate leaves with minor serrations around the edge. This plant flowers abundantly in spring with tiny white flowers that can develop to shiny bright red berries when pollinated. 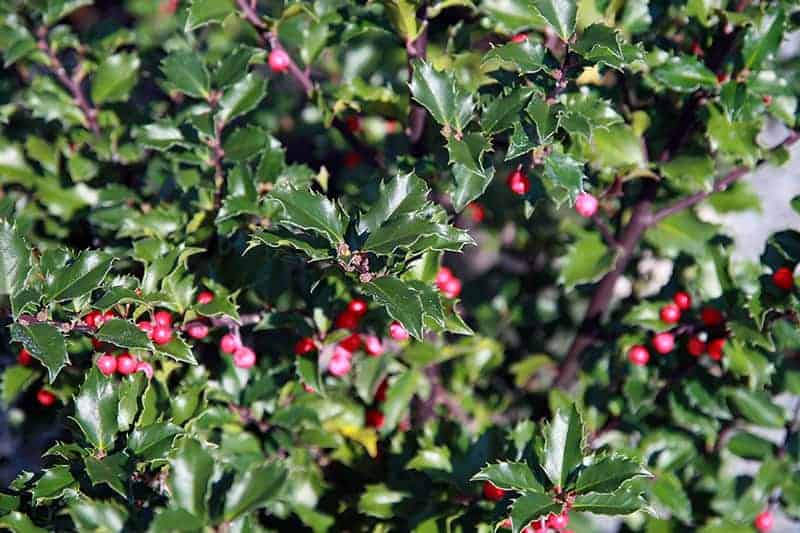 The spiny leaves of this female blue holly are a dark blue-green color with a glossy finish. They are produced on purple stems along with small white blooms in spring. Suggested plants to pair this with in order to encourage pollination and result in fruiting is male blue holly plants such as ‘blue prince’ and ‘blue stallion.’

This compact male holly shrub has an upright habit. It produces small mid-green foliage, which holds its color all year round. This plant is an attractive specimen in its own right, but also serves the purpose of pollinating nearby female holly plants so that they can produce berries. 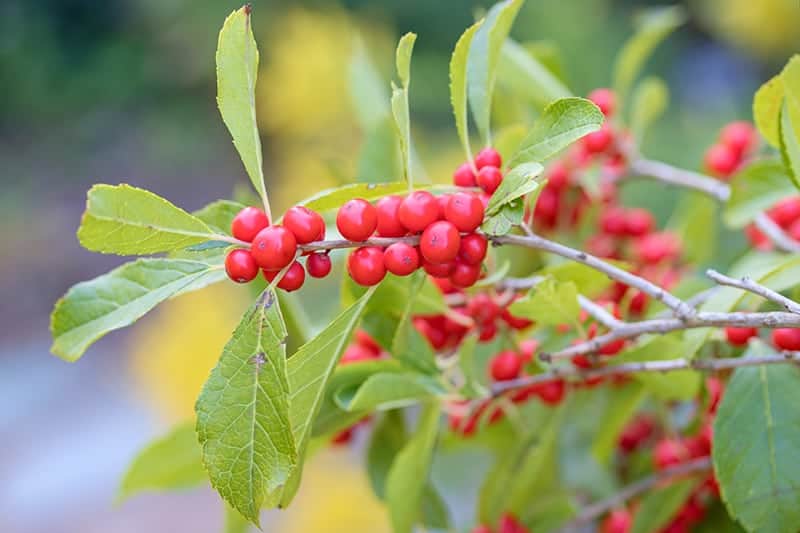 Mature Size: Up to 8 feet tall 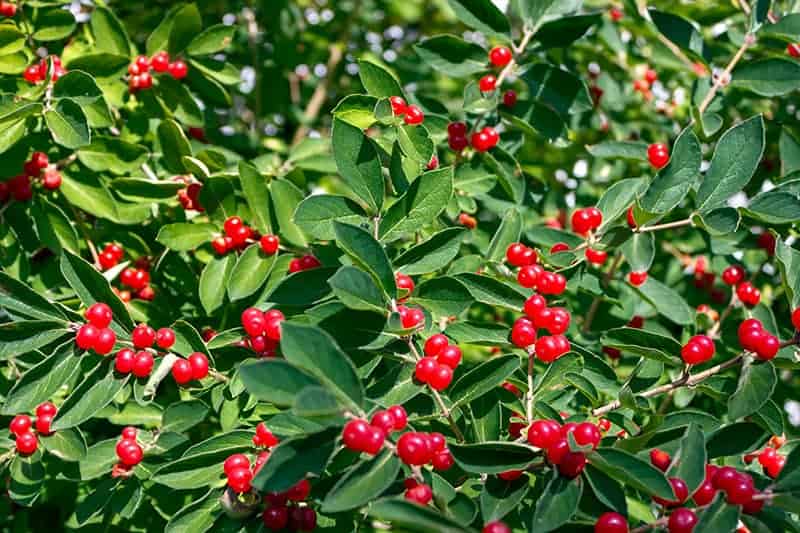 This is a female holly which is native to the east of North America. It thrives in a wide range of soils, including wet and boggy soil types. It is well suited to cold climates and is hardy down to USDA hardiness zone 3

This holly produces pure white blooms towards the end of spring, which will develop into glistening red berries when pollinated by a male counterpart. The shrub has a spreading habit and will grow as wide as it is tall, making it ideal for use as a decorative hedge or border. 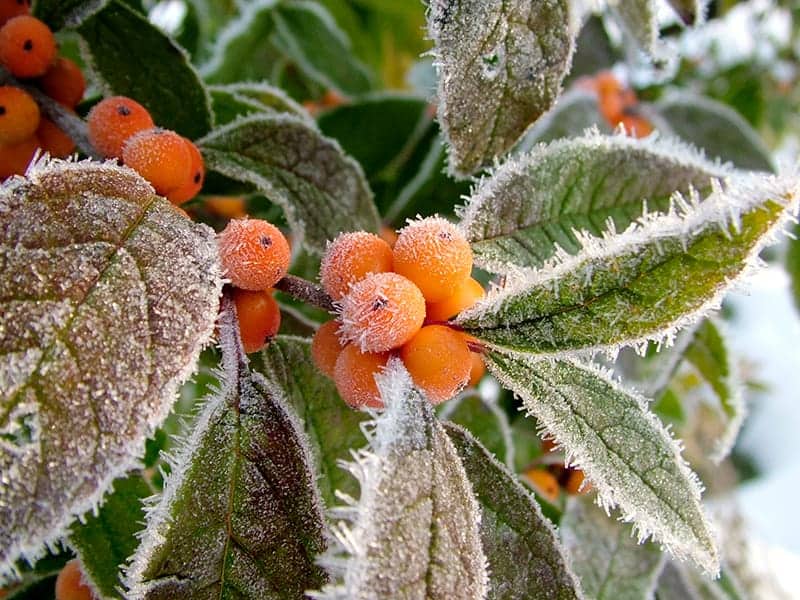 This deciduous holly gets its name from the golden orange berries it produces in abundance throughout winter, following the green-white flowers that arrive late in the season, from late spring to summer. It has a slow growth habit, forming a loose round shape with its many slender branches. It needs to be grown in acidic soil, as these plants grown in neutral or alkaline soils tend to struggle and die.

This male holly is a dwarf variety that grows to between three and six feet tall. It produces small green-white berries that can be pollinated with female flowers in order for those plants to fruit. It is a deciduous shrub with deep green, ovate leaves that have serrated edges. These leaves will transform into a purple-yellow color in fall, before turning entirely yellow and falling to the ground. 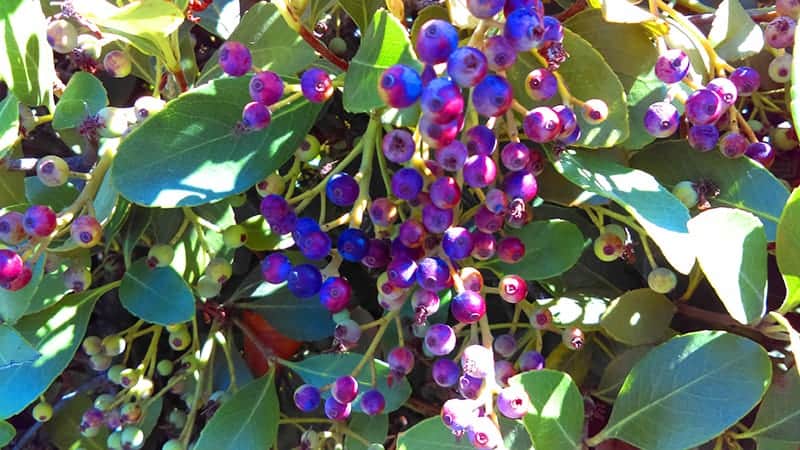 Mature Size: Up to 4 feet tall

This dwarf evergreen holly has a rounded habit that makes it well suited to container growing. The foliage is deep green, narrow, and smooth-edged, with tips that are flushed with red in spring. This plant is not easily identifiable as a type of holly, and instead commonly gets mistaken for boxwood.

This shrub has slender evergreen foliage from which masses of tiny greenish-white flowers bloom in late spring and early summer. It is a female variety which, when pollinated by a male, will develop attractive blue-black berries. It is these ink colored berries that give the plant its common name of ‘inkberry holly.’ 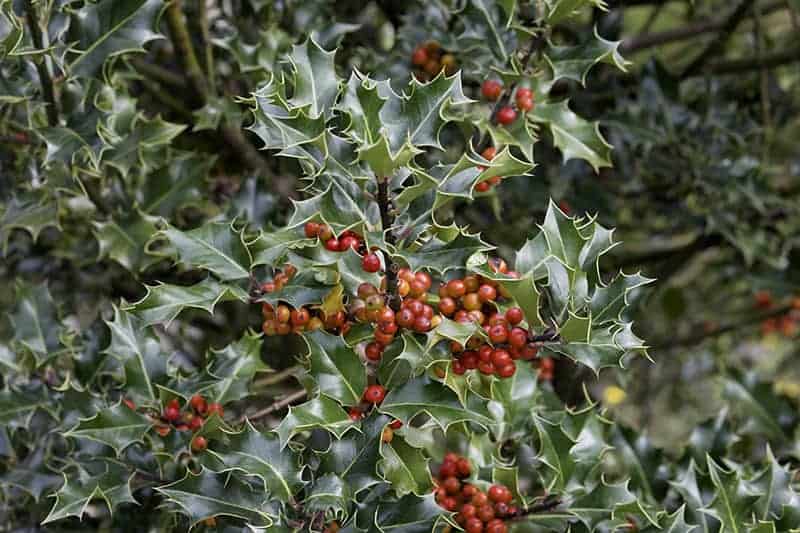 This plant has an architectural look, with an upright growth habit that forms a tall and slender column shape which does not need to be pruned. The branches are densely packed together and adorned with tiny leather-like leaves, which are bright medium green in color. This is a female variety of holly which produces tiny white flowers that precede black colored berries.

This narrow holly shrub has a pyramid shape that works well in containers or as a standalone specimen plant. It prefers moist soil, but it does have some tolerance against drought when established. 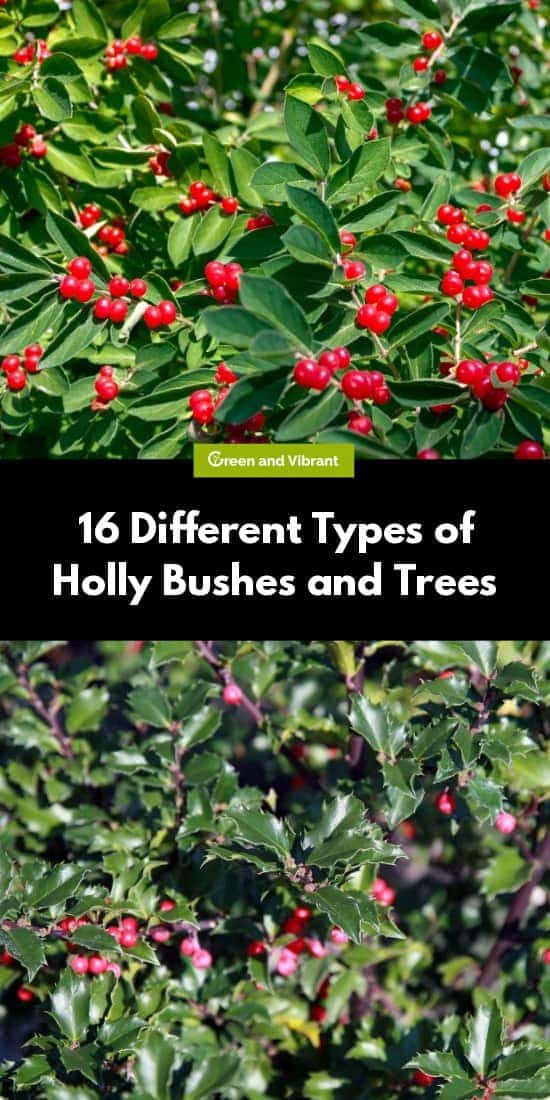