What is Vermiculite? What is it used for? 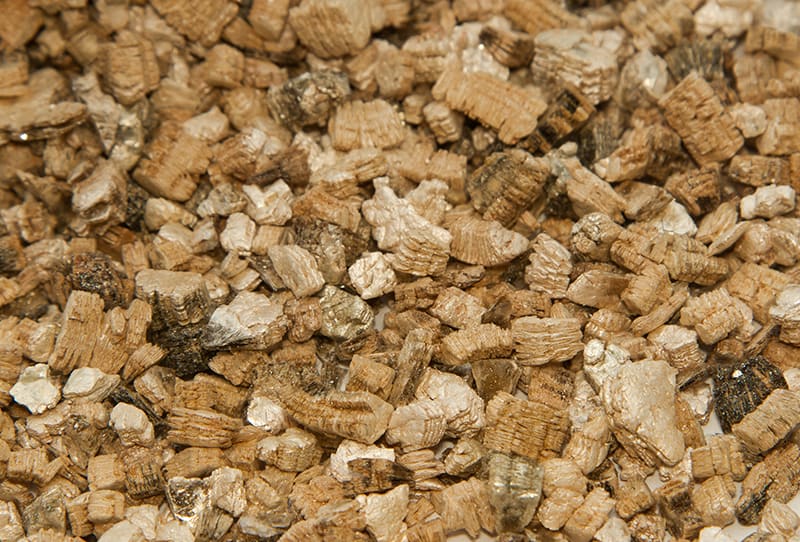 If you’re looking for an additive to improve the quality of your soil, or even entirely replace the soil, then vermiculite is an attractive option. It is commonly used in soil mixes, as well as by professional gardeners and nursery workers to improve seed germination success and encourage rapid root growth in cuttings.

It can also be invaluable in preventing plants from being overwatered and succumbing to root rot, as it has impressive moisture retention properties that release water in line with the plant’s needs. So what actually is vermiculite, and how can you use it for the benefit of your plants?

Vermiculite is a naturally occurring mineral that takes the form of glossy flakes, varying in color from dark gray to sandy brown. These flakes, which are more specifically a hydrated magnesium iron aluminum silicate mineral, get heated up in a purpose-built a commercial furnace, where they then expand and take on a concertina shape, almost like a tiny accordion.

It is this version of vermiculite that is used in horticulture most commonly as a means of improving soil quality or giving seedlings a helping hand to root more quickly.

How Is It Made? 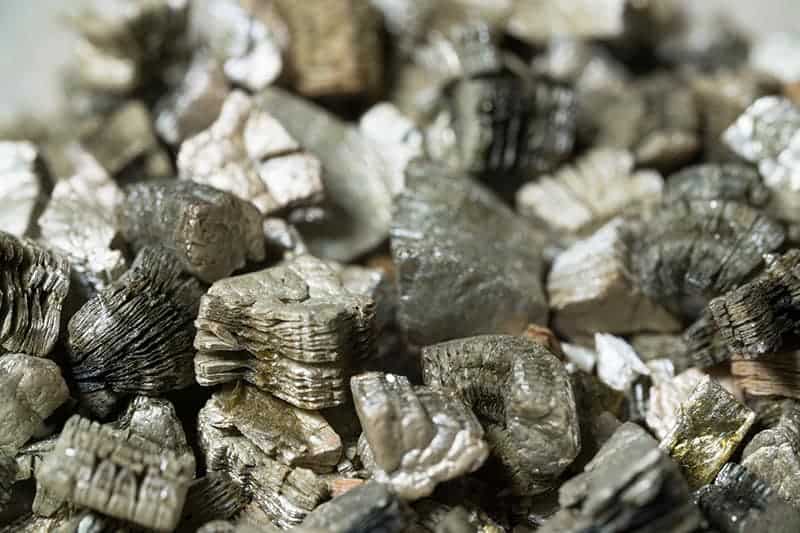 Vermiculite in its natural form looks a lot like mica, with a layered rock appearance. It is mined in various regions throughout the world, including Russia, Australia, Brazil, Uganda, and the USA. Open-pit or open-cast mining is the technique employed to extract the vermiculite from the earth. This is because the minerals are found relatively close to the earth’s surface, and therefore, tunneling is not required.

Open cast mines look like giant craters in the ground, where the miners work to separate ore from vermiculite and other minerals, then sort them into different categories based on size. Following its extraction from the earth, the vermiculite is heated in industrial furnaces, where it will change in structure. This process is called ‘exfoliation.’ Exfoliated vermiculite transforms into small strands that look like worms, and this is how vermiculite got its name, from the Latin word ‘vernacular,’ which translates roughly to ‘to breed worms.’

Once the exfoliation is complete, the finished product will vary in looks, depending on its size. There are four sizes of vermiculite available, with the largest size having an obvious concertina shape. The smallest sizes to the human eye just look like large grains of sand.

How to Use Vermiculite in the Garden

Vermiculite produced for use in the garden will always be the exfoliated type of vermiculite. It has many useful qualities that can benefit your soil and plants. It is aerating, moisture-retentive, nutrient-retentive, lightweight, non-toxic, sterile, does not rot or mold, and has a neutral pH.

Vermiculite can be added to poor quality soil to improve it. If you have heavy, clay, poor-draining, or sandy soil in your garden, then most plants are going to struggle to survive, let alone thrive in this environment. You will often hear the phrase ‘improve your soil before planting,’ but how do you actually do this in practice? Vermiculite is your answer. Use around half the volume of the soil in vermiculite, and work it deep into the soil. The vermiculite will drastically improve the soil’s aeration, allowing plants to grow much better. It will also retain the necessary moisture and nutrients to help feed the plant.

Vermiculite is commonly used by those in the gardening trade to root cuttings. It can be used in various ways, either used alone, mixed with soil, or combined with bark for a soilless potting mixture. Whether used alone, or in a mix, propagating a cutting with vermiculite will promote anchorage for new roots, and speed up root growth. If you want to encourage a more rapidly rooting cutting and a higher propagation success rate, vermiculite is the preferred material to use (The Vermiculite Association). 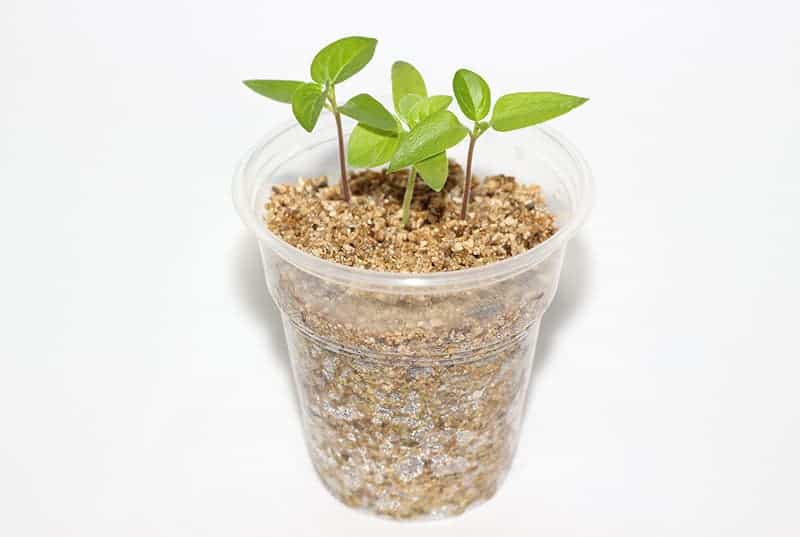 Vermiculite can be used alone or in a potting mix for improved seed germination. Utilizing vermiculite for this purpose will see seedlings develop more quickly. If used alone, add only a small amount of water so as not to overwhelm the seeds.

The vermiculite will release the moisture to the seedlings as and when they need it. You should also add a few drops of weak fertilizer once leaves appear on the seedlings, to substitute nutrients which would ordinarily be supplied by the soil. When the seedlings are ready to be planted outside, they can easily be removed from the vermiculite without damage to the roots and potted on.

Vermiculite is an excellent addition to pots of soil, whether that be in outdoor containers or for houseplants. Mixing some vermiculite into your potting soil will improve aeration and moisture retention, resulting in a healthier root system that is better able to spread out and absorb nutrients, thereby creating a lusher plant. You will also need to water the plant less frequently as the vermiculite retains water and releases it when appropriate.

After applying seed to your lawn, spread around a quarter inch of vermiculite over the top and water with a gentle sprayer. You should use approximately 3 cubic feet of vermiculite for every 100 square feet of lawn. This addition will increase the speed at which your seeds germinate, and increase the number of seeds that germinate, for a fuller-looking lawn. The vermiculite will help to maintain a consistently moist lawn, and also protect the seeds from heat.

If you like to create your own homegrown cut flower bouquets, vermiculite offers a great hack to use instead of a vase full of water. Simply fill your container with vermiculite and moisten with water, then add in your cut flowers. This eliminates the need to change stale water, will prevent potential spills and keeps the flowers looking fresh for longer.

For plants that need to be overwintered indoors, vermiculite offers an easy storage solution that will keep the bulbs or root systems in their best condition. First, allow bulbs or roots to dry out for several hours after being removed from the ground. Then fill a container with vermiculite and tuck in your bulb or roots. The vermiculite will prevent rotting, which is a common problem for stored bulbs. It has absorption properties that will keep excess moisture away from the plant without stealing any of the plant’s own stored moisture.

Whether you have grown your own plants from seed, or you have bought them home from the nursery, you will need to transplant them to their permanent home in the ground. Vermiculite will help your plant to settle in better, ensuring its ideal care needs are met.

To use it for transplanting, dig a hole several inches bigger than the plant’s current root system, and add in a mixture of vermiculite and topsoil. Position the root ball in place, then fill the hole with more vermiculite and topsoil. This will help to control moisture levels and improve aeration around the roots, thereby allowing for greater root spread.

Vermiculite can effectively be used as a mulch for some types of plants, including roses and tomato plants. Add just a few inches on top of the soil to improve moisture control and provide heat protection to root systems.

How to Use Vermiculite in Hydroponics

Vermiculite can be effectively utilized in a number of ways in hydroponics, essentially soil-free gardening. Though hydroponics gardeners do not use soil, they will often use other materials to support the growth of their plants. Vermiculite can be used in place of soil in various settings, including seed germination, or when rooting cuttings. It encourages more rapid root growth and helps to control moisture levels.

Moisture control is especially important for young plants, who have weaker root systems, which more easily succumb to rot. Vermiculite helps to prevent this problem as it retains moisture, which is released when the roots need it, meaning you won’t have to keep such a close eye on watering the seedlings or cuttings. When used alone, you will need to add fertilizer to vermiculite to provide plants with the nutrients they would ordinarily withdraw from the soil.

Vermiculite is able to help plants more easily absorb nutrients, including magnesium, calcium, and potassium. It can also be combined with other non-soil materials such as perlite and pumice to create custom hydroponic growing media.

In the past, there have been health concerns over using vermiculite in homes and gardens. This worry stems from a vermiculite mine in Libby, Montana, USA, which at one time was the largest producer of vermiculite on the planet. The vermiculite mined at Libby was found to contain a dangerous type of asbestos, which naturally grew alongside the vermiculite, and the mine was permanently closed in 1990.

Vermiculite sold today is subject to strict industry protocols that ensure it is safe to use. It does not have any proven toxic or carcinogenic effects and does not contain any trace of asbestos or other harmful minerals. It is commonly used around the world in various forms, not just for gardening, without any negative human impact. Some people may still associate vermiculite with asbestos, but this is unfounded.

Pros and Cons of Vermiculite in Gardening 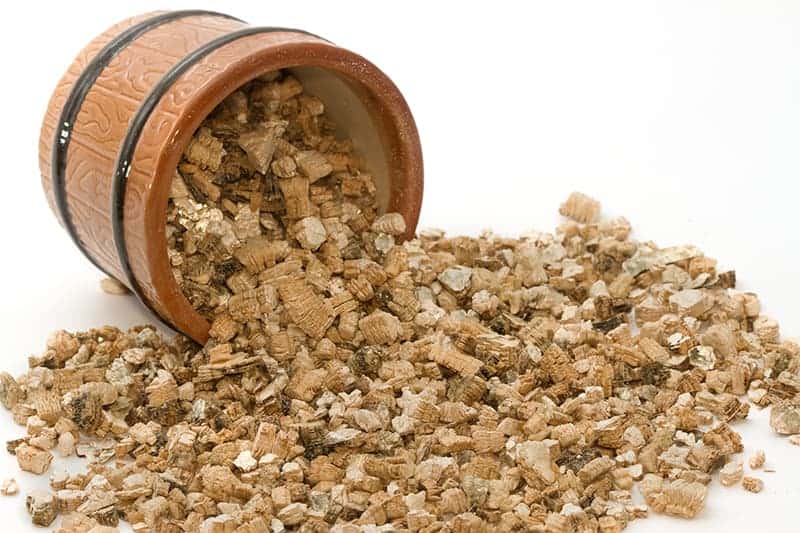 How Does Vermiculite Compare to Some Other Mineral Additives?

These are both naturally occurring mineral additives that have many of the same qualities. They are both used in gardening to improve soil quality, especially aiding with aeration. Perlite is known to be more effective at aerating soil than vermiculite, while vermiculite is better at retaining moisture. It has a more expansion potential and is, therefore, able to hold on to greater amounts of moisture.

Many gardeners combine vermiculite and perlite in custom gardening mixes, as they both offer benefits to growing plants. Due to their different moisture retention qualities, vermiculite is better suited to moisture-loving plants such as ferns that enjoy consistent moisture, while perlite would be more suitable for succulents and other plants that prefer a drier growing medium.

Perlite is very lightweight, which means when used in hydroponics gardening, it will float away, rendering it useless. It can also be difficult to use when mixed with soil, as it can float to the top of pots and spill over the edge when they are watered. Vermiculite tends to be heavier, so it is ideal for use in bigger pots, which require some extra weight to prevent them from toppling over.

Pumice is another lightweight mineral that can be added to gardens for the benefit of plants. It is excellent at retaining oxygen, therefore making it an ideal additive to improve aeration in heavy or poor-draining soil.

Mixing pumice with sandy or light soils will help to improve water retention while mixing it with clay soils can help to loosen the density of the soil and make it less compact. Similarly, to perlite, it can be too lightweight for use in hydroponics gardening. Pumice has minimal moisture-retention qualities, so if you are concerned about increasing moisture retention, then vermiculite would be a much better addition to your garden.

Vermiculite is a versatile, naturally occurring mineral that can be used alone or mixed with other growing mediums to improve plant health and plant growth. It helps with soil aeration and greatly improves soil quality, but where it really shines is with its ability to retain moisture, thereby ensuring roots have the moisture they need while preventing overwatering. Vermiculite can be expensive to buy but may prove itself to be priceless when it comes to the health of your plants.