Parts of a Flower and Their Functions (With Diagram) 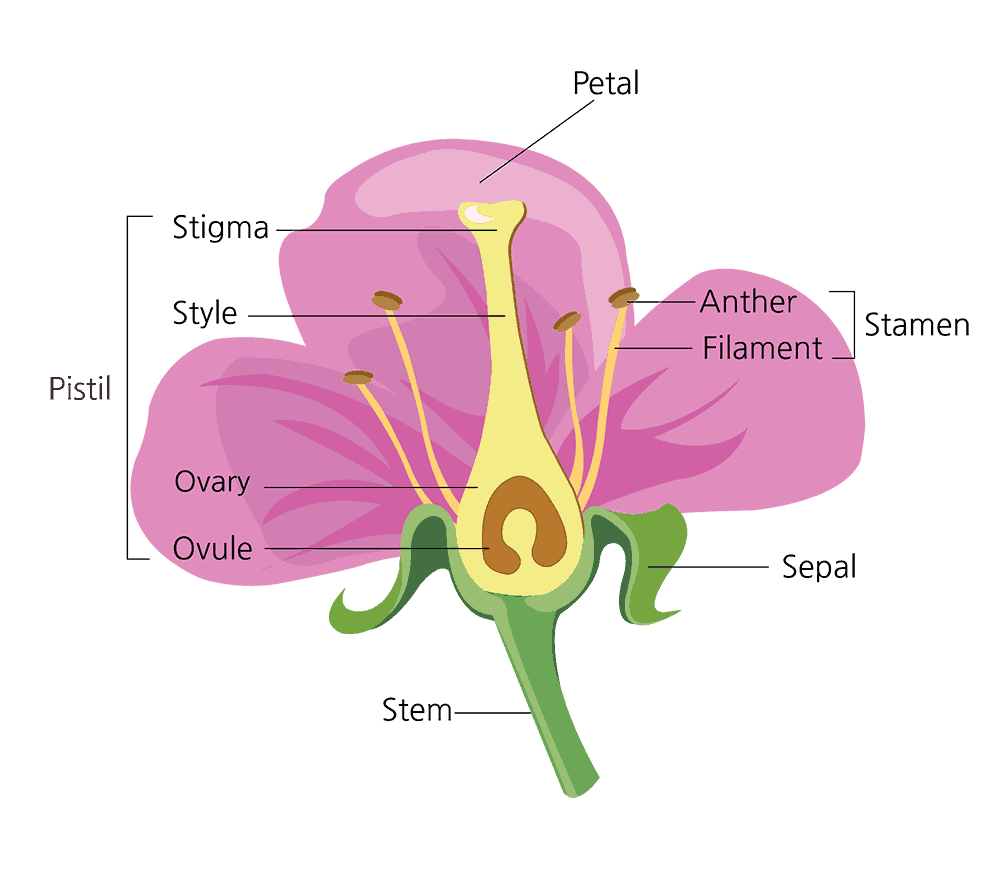 The sole purpose of flowers is sexual reproduction, therefore ensuring the survival of the species. Many flowers that rely on pollinators, such as birds and butterflies, have evolved to have brightly colored petals and appealing scents as a way to attract the attention of the pollinators. Flowers that are pollinated by the wind do not need to be as showy in order to survive and, therefore, wind-pollinated flowers are typically duller in both aesthetics and scent.

Here we’ll learn about every part of a flower, and understand in details why flowers are different from one another.

Although all flowers are different, they have several things in common that make up their basic anatomy. The four main parts of a flower are the petals, sepals, stamen, and carpel (sometimes known as a pistil). If a flower has all four of these key parts, it is considered to be a complete flower. If any one of these elements is missing, it is an incomplete flower.

The reproductive parts of the flower that are necessary for seed production are the stamen (the male organ) and carpel (the female organ). If a flower has both of these parts, it is called a perfect flower, even if it lacks some of the other key parts. If a flower has only one of the reproductive parts, either a stamen or carpel, it is considered to be an imperfect flower.

These plants make life easier for themselves, and for the gardener, as they are self-pollinating and are therefore able to bear fruit and produce seed on their own. Dioecious plants have imperfect male and female flowers on separate plants, so one plant will have all-female imperfect flowers with carpel and no stamen, while another plant of the same type will have all-male imperfect flowers: functioning stamen but no carpel. For dioecious plants, it’s imperative that they are planted near each other to make pollination more likely.

The Four Key Components of a Flower

Sepals are the exterior parts of a flower that protect the interior flower while it emerges. Sepals are typically green and leaf-like, as they are in fact modified leaves, but it is possible for them to be almost any color depending on the type of plant. The sepal is the first part of the flower to grow, forming at the uppermost end of a stem. The sepal creates a bud around the emerging flower, and its key responsibilities are to protect the flower as it grows and prevent it from drying out. Not all flowers have sepals, and in some cases, the sepals are modified into bracts that surround the flower. They are often brightly colored, and in many cases, the bract draws more attention than the flower itself.

Petals exist to draw pollinators to the flower. It is for this reason that they are often brightly colored, showy, and of interesting patterns and sizes. The petals together form what is known as the corolla of the plant. Petals are probably the part of the flower that has most variation from plant to plant. Not only do they differ in color, size, and shape, but some petals form in several layers to create very full-looking flowers, while others appear to not have separate petals, but instead are one solid petal.

The stamen is the male reproductive organ of a flower. Each stamen contains two main parts. The filament is the long cylindrical tendril part of the stamen, while the anther is a sac that sits at the top of the filament. The function of the filament is simply to hold up the anther, extending it up to an accessible part of the flower for pollinators reach, or for the wind to disperse the pollen.

The anther is where the pollen is produced, and each anther contains many grains of pollen that each have the male reproductive cells present in them. Each flower can have just a few stamens, or hundreds of them. The function of the stamen is to produce pollen and make it available for pollinators to allow reproduction. When a pollinator, such as a bee or a bird, touches the anther the pollen will stick to them, and then get transported to other flowers they visit. This is where the carpel comes in (Oregon State University Extension).

The carpel, which is also sometimes called the pistil, is the female reproductive organ of a flower. Each carpel is usually bowling pin-shaped, and features a sac at its base in the center of a flower, and this sac is the ovary that produces and contains developing seeds, or ovules. Moving upward, the ovary extends to support a style, that is a tube-like structure leading up to the stigma at the very top.

The stigma features a flat surface with a sticky texture, that is ideal for capturing pollen that has been transported to the stigma of the flower by wind or pollinating insects and birds. Upon arriving on the stigma, pollen will germinate to produce a pollen tube down the style. When it reaches the ovary sac, the pollen tube fertilizes the ovules. At this point, pollination is complete.

A fertilized ovary swells to protect the developing seeds and transforms the flower into a fruit. Inside the fruit, a fertilized ovule becomes a seed, from that the plant can be sown and an entirely new plant created (University of Illinois Extension).

Other Parts of a Flower

The corolla presents differently in different types of flowers, but it always makes up the inner perianth that immediately surrounds the reproductive part of the plant. Typically, the corolla is made up of a circle of distinct petals, but it can also be formed from one solid petal in the case of petunia. It may also be lobed or layered in the case of some roses, which can be referred to as double or even triple blooms with many layers of petals.

The corolla attracts pollinators to the plant with its vivid coloring and interesting scents, except for in the case of flowers that are pollinated by the wind. Wind-pollinated flowers have not needed to evolve to attract birds or insects for the survival of the species and, therefore, their corollas are often plain or dull.

The filament is the thin tubular part of the stamen that extends and supports the pollen sac at the top.

The ovary produces and contains unfertilized seeds. It sits centrally inside the flower at the base of the carpel. Once fertilized, it is the ovary that develops into the fruit of the plant.

Ovules are contained within the ovary, and in the event of successful pollination, they will become the seed of the fruit.

The anther sits at the top of the filament of a stamen and produces and contains the pollen.

A bract works similarly to a sepal on plants that do not have sepals. It is a modified leaf that looks more like a petal than a leaf, as it is usually brightly colored and shaped differently to other leaves on the plant.

The style is the elongated part of a carpel that joins the ovary to the stigma. It is the tube through which pollen is delivered to the ovary.

The stigma sits at the top of the carpel, and its job is to capture pollen. It is often sticky in texture or contains tiny hair-like structures to help pollen adhere to its surface.

A peduncle is the stalk of a flower, or the stem from which a cluster of flowers bloom.

A pedicel is the secondary stalk from which flowers grow off the main stem. Only plants that have inflorescence in the form of clusters or similar will have pedicels.

The calyx is the technical term for a group of sepals, leaf-like structures that surround and protect the bud as it forms into a flower.