The red spider lily’s name may evoke shudders from arachnophobes, but the name is apt because the flowers have several petals that look like the legs of spiders. This late-blooming perennial is grown from bulbs and blooms in late summer to early fall. The plant is notable for the fact that its leaves are present from winter through late spring, then die off and make way for two weeks of bare stem flowers in the late summer or early fall. Here are some other notable facts about red spider lilies: 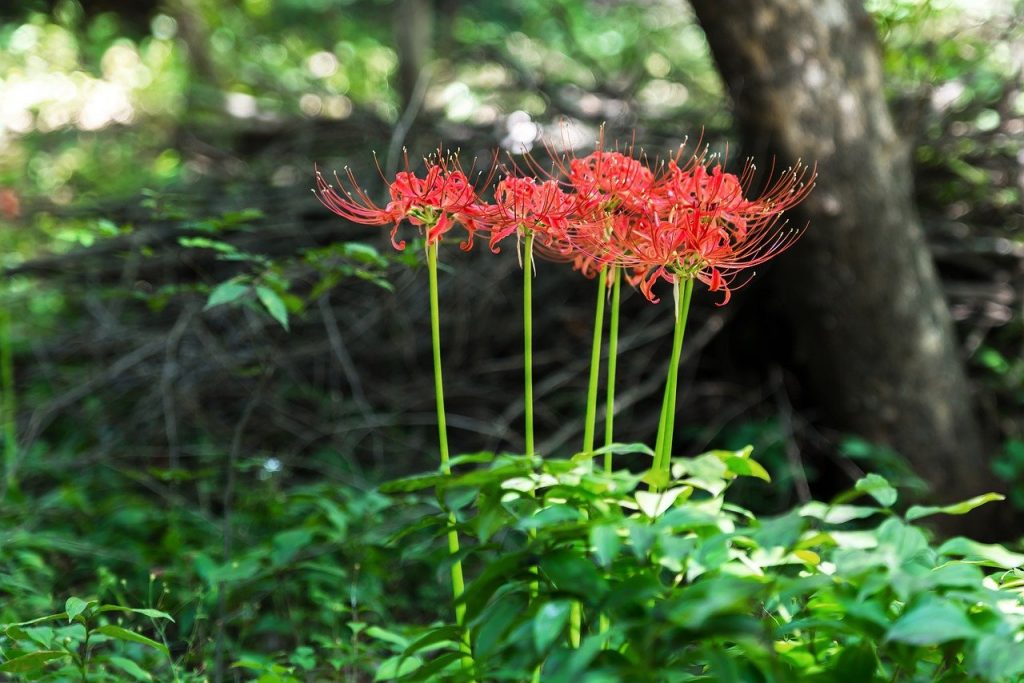 Red spider lilies grow in USDA hardiness zones 7 through 10, though in colder areas they can survive the winters with the help of a few extra inches of mulch.

Once you have planted a red spider lily it requires little to no care and suffers from being relocated, so choosing the right spot is important. Unlike other spider lilies they do best in partial shade, especially in areas noted for hot temperatures. The bulbs should be planted in late summer or early fall.

To plant red spider lily bulbs, dig holes that are the same size as the bulb itself and place the bulbs with the growing tip pointing up, no less than four inches apart. Fill in the hole around the bulb with dirt, leaving the neck just above the surface. In growing areas with cooler climates, covering the bulbs with an inch or two of mulch will help them survive the winter. After planting, water the soil thoroughly. 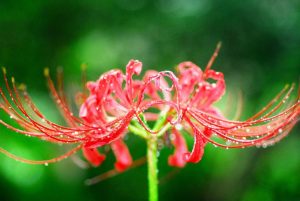 Immediately after being planted, red spider lily bulbs require watering, and after that they do best in moist soil that gets water about once a week. Once the summer season starts the red spider lily will do best in soil that dries out a bit, as this facilitates its entry into the dormant stage when its leaves die back. This period is followed by its blooming season, when it will reward daily watering with long-lasting blooms. Too much moisture in the soil will lead to the bulbs rotting.

Red spider lilies thrive in soil that has plenty of organic material mixed in but they do not require fertilizer. Newly planted bulbs would actually be harmed by exposure to fertilizer, so if you are going to apply nutrients, limit the application to established plants when the plants are producing their green leafy foliage.

Like many other bulbs, pruning a red spider lily can actually diminish the plant’s blooms, as the dying, yellowing leaves provide nutrients for the bulbs prior to their entering their dormant period. Once the leaves are completely brown they can be cut back, but not before.

Red spider lilies are resistant to diseases and pests, though they sometimes attract slugs. Slugs are easily managed by copper flashing or by putting a copper foil-wrapped collar around the base of the plant. One of the advantages of red spider lilies is that they do not appeal to deer or squirrels the way that many other bulbs do. 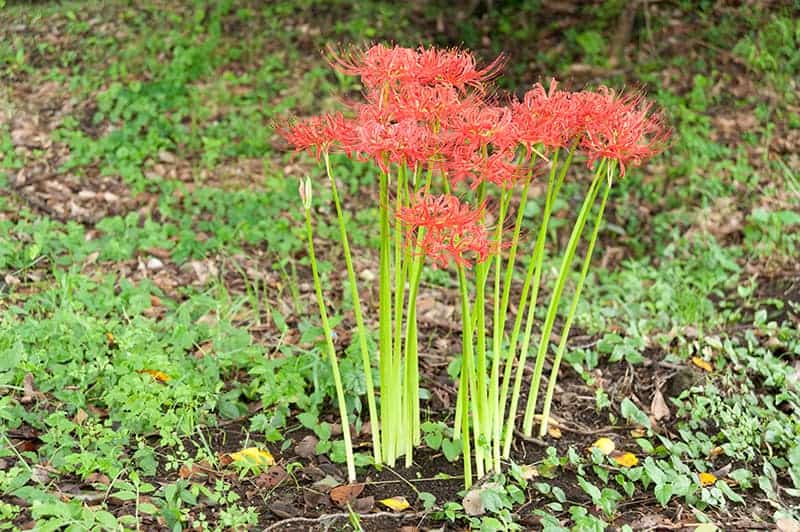 Red spider lilies will grow in almost any type of soil, providing that it drains well. It is unconcerned with soil pH, and will even grow in heavy or poor-quality soils, making it a good choice if you have these less preferable types of soil in your garden.

If you have the option, red spider lilies grow best in soil that is fertile and rich in organic content. A well-draining soil is essential to help prevent root rot and drain water away from the plant. 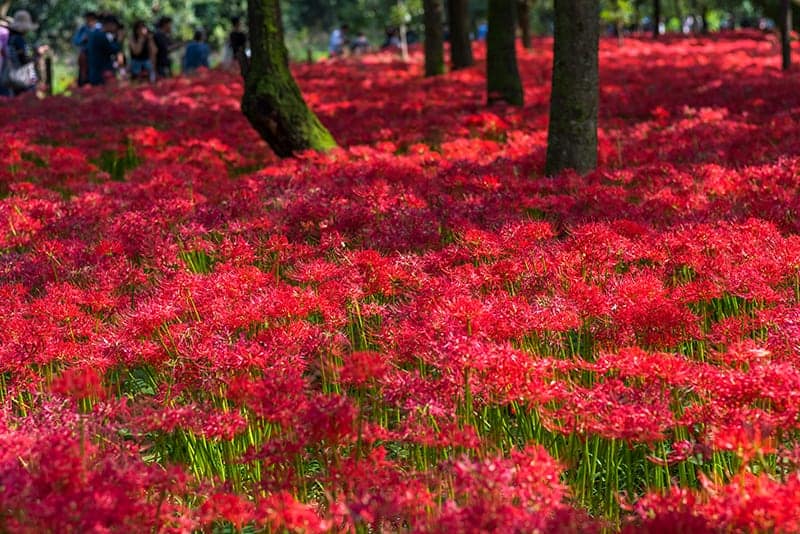 These plants require plenty of light, around a minimum of 6 hours each day, to bloom abundantly. The best position for your red spider lilies will be in a spot where they have sun for most of the day but are shaded for the hottest part of the afternoon. This will provide them with some protection when the sun’s rays are at their most intense, and it is especially important if you are in a hot climate.

Red spider lilies will tolerate a position of full sun, particularly if your climate is on the cooler end of the appropriate hardiness zones. These plants tend to produce the most impressive blooms when they are allowed to sit in the sun for the majority of the day, with a few hours of shade. One way to offer this is to plant the red spider lilies under the sparse canopy of a tall tree, where the branches will provide dappled shade.

If you grow this plant in a container, then you have the option of experimenting with lighting positions, moving the pot around until you find the spot which works best for the red spider lily in your climate. Red spider lilies grown in partial shade will bloom earlier in the year than those grown in a full sun position. You could plant the bulbs in various locations throughout your garden so that their blooming time is staggered, giving you flowering plants for a longer period.

Red spider lilies are hardy through USDA hardiness zones 7 to 10, though many growers find they also fare well in zone 6. They enjoy warm weather and will not survive climates that experience freezing conditions through the winter.

If you are growing red spider lilies in the lower end of the hardiness zones, it is advisable to bury the bulb slightly deeper than usual when planting, as this will offer some protection against low temperatures. In cooler climates, this plant will also need protection over winter, with deep layers of mulch. 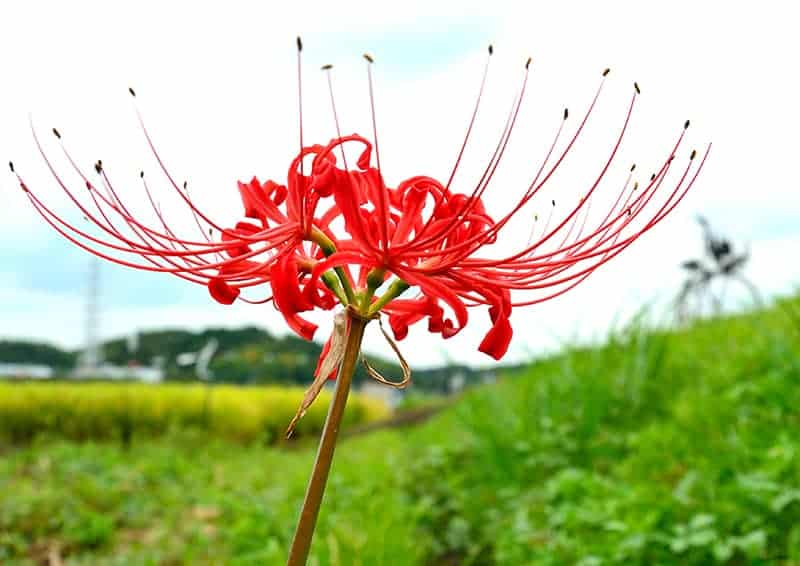 The flowers of the red spider lily bloom for just a few weeks during September or October. One of their common names, ‘hurricane lily,’ comes from the fact that these plants flower during hurricane season. The flowers appear on tall stems measuring between 1 and 2 feet in height.

Flowers show before leaves have started to develop, with between 4 and 6 blooms being produced by each bulb. The flowers have a unique appearance, with coral-red slender and dainty petals which curl inwards at the ends, and stamens which protrude further out than the petals.

Once the flowers fade, the foliage emerges in a green-blue color on long and slender leaves. The leaves remain throughout winter, all the way through to the following spring when they die and fall off the plant. The plant is bare throughout summer, when it enters a period of dormancy before shoots make an appearance again in late summer or early fall, and the cycle repeats.

Bulbs will produce bulb offsets, allowing your patch of red spider lilies to grow in size each year. Between 5 and 7 years after planting, the mass of bulbs which will have developed underground will need to be divided to encourage good health, but also as a means to propagate the plant and create more new red spider lilies for your own garden, or to gift to family and friends.

One sign that your bulbs need to be divided is if the flowers produced have become smaller than usual. This typically happens when the root systems become so crowded that each plant is fighting for moisture and nutrients to be able to produce blooms.

Red spider lilies resent being disturbed, so you should try only to divide them when it is necessary for the plant’s health. Avoid disturbing these plants for any other reason. Only divide the plant during the summer when it has entered dormancy. If you divide a red spider lily while it has foliage or flowers on it, you could disturb its growing process, and be left with a plant which does not flower again for several years.

To divide them, carefully dig around the soil where they are growing, and lift the bulbs out of the soil, ideally with their entire root systems attached. Brush off excess soil so that you can get to work on the bulbs, pulling them apart into smaller groups. Replant the bulbs at the same level in the soil as they were before, in a new location in your garden, or in a container. Water the plants generously to help them settle in. 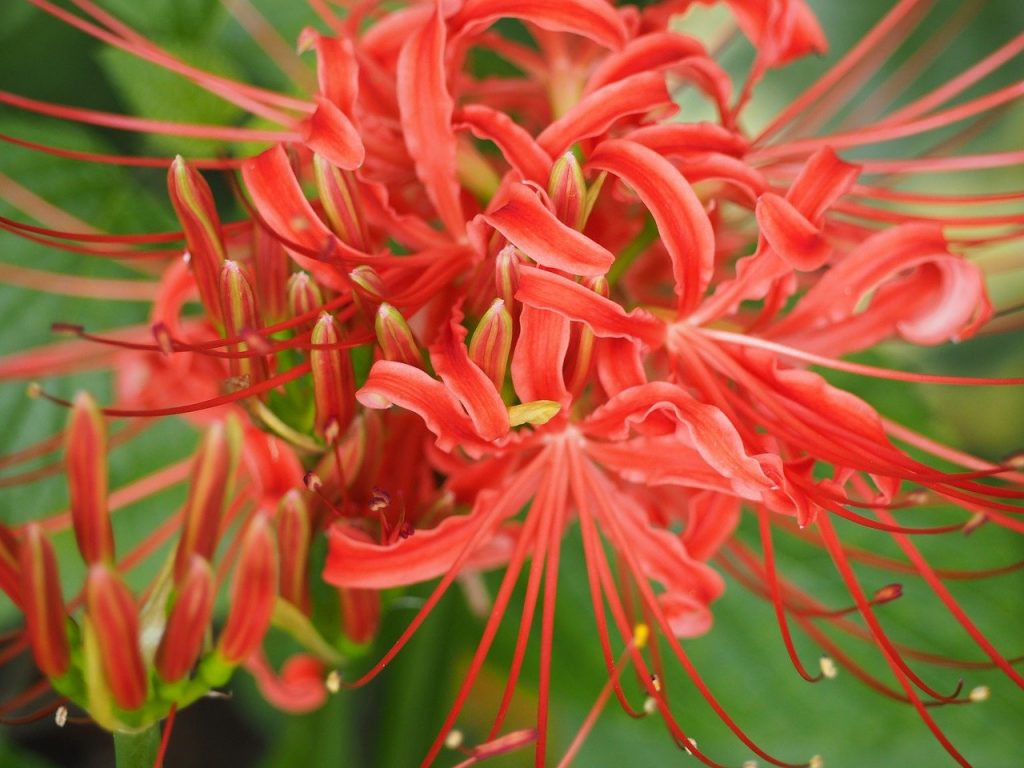 Red spider lilies are poisonous to humans and animals, and therefore are best for homes that do not have children or pets. The benefit of their toxic quality is that it discourages deer and rabbits from feasting on your garden. In fact, throughout history, Japanese farmers have edged their rice fields with red spider lily bulbs to keep out mice and other pests.

The bulbs of the red spider lily are poisonous, and ingesting them can cause severe symptoms in domestic pets or young children that eat them. Common symptoms include stomach cramps and diarrhea.

Are red spider lilies known by any other names?

Red spider lilies are a species of Lycroris, of which there are many varieties. These include the following. 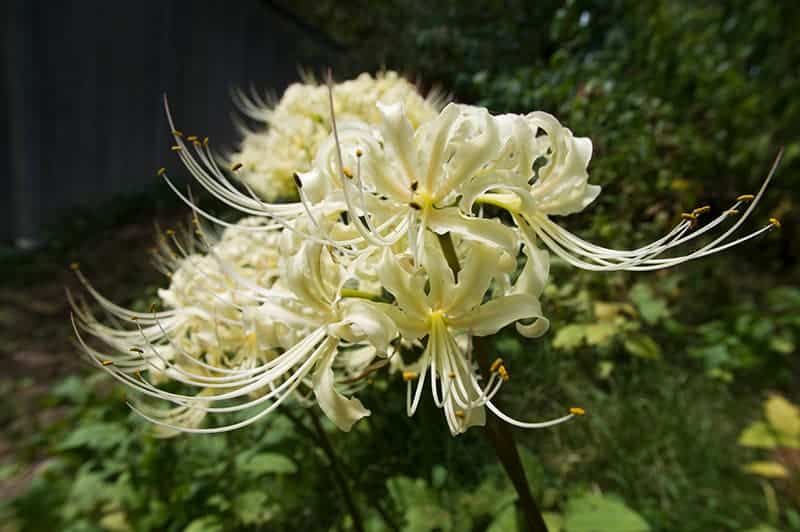 This plant produces delicate white flowers that look identical to the red spider lilies blooms, except for the difference in color. Known as white spider lilies, these plants are marginally hardier than their red counterparts and are suitable for growing through USDA hardiness zones 5 to 9. 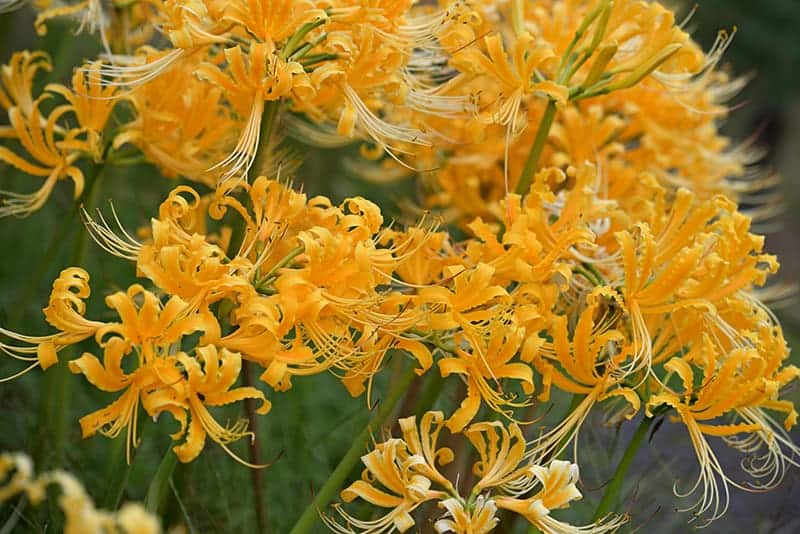 Commonly referred to as golden spider lily, this plant produces golden yellow flowers. It works well in flower bouquets, as the cut flowers are both beautiful and long-lasting when cut. This type of Lycoris plant requires full sun to produce an impressive array of blooms. 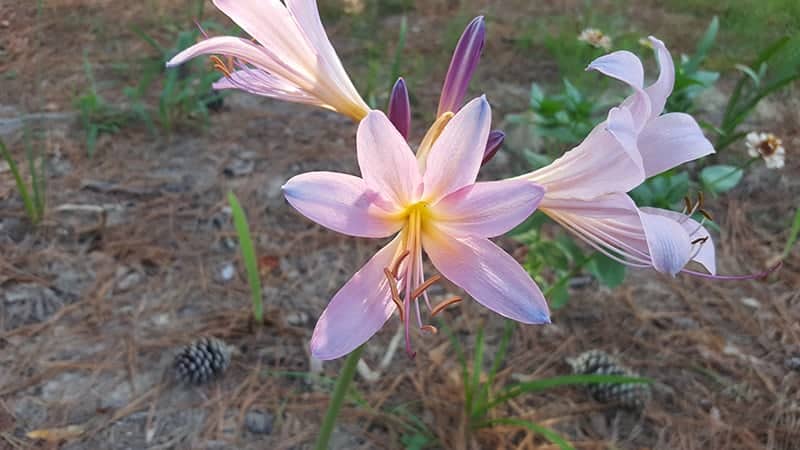 This stunning plant features pale pink flowers, which look as though they have been dyed blue at the tips of the petals. This unique coloration has earned the plant the common names of tie-dye lily, and electric blue spider lily. It requires a full sun position and is hardy through USDA hardiness zones 6 to 10 (Gardenia). 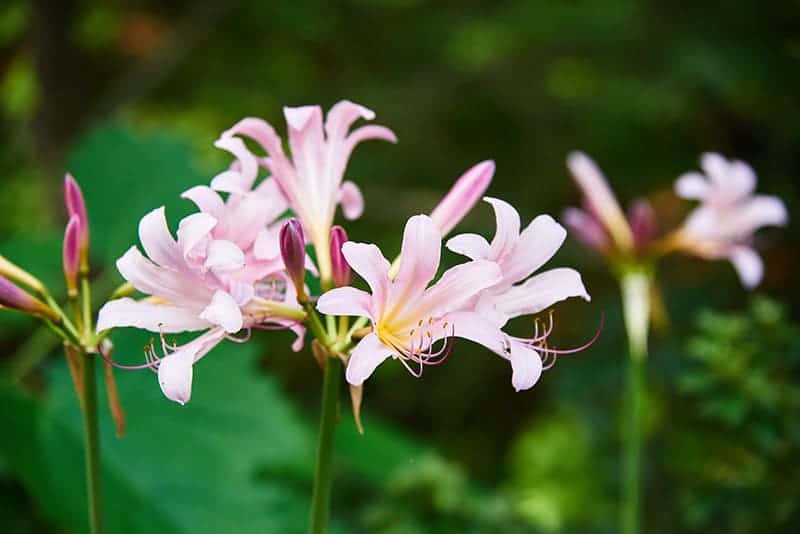 This is one of the hardiest types of spider lily, and it produces beautiful pink-lilac flowers which have a more typical look about them, as their petals are not as dainty or curled as other spider lilies. The flowers rise above the foliage on tall stems, which typically measure around one and a half feet in length. 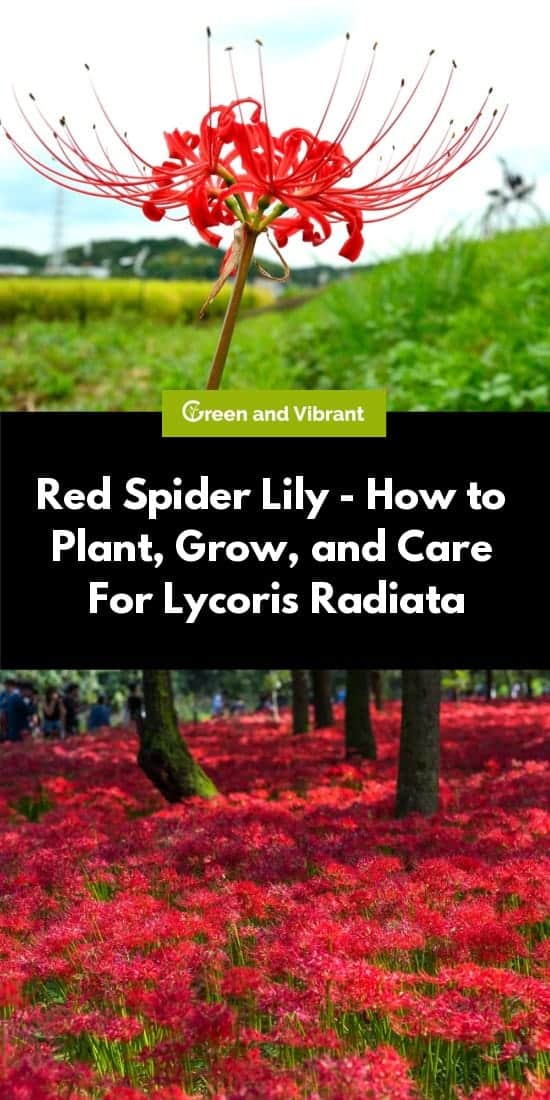