of
Where to buy Cucumbers

Cucumber plants are warm-weather plants that can grow anywhere with warm to hot summers. They typically take around 60 days to be ready for harvest, making them ideal for growing even in regions that experience hot weather only for a few months a year. These plants are easy to grow and very rewarding. There are many types of cucumbers, which can be categorized into three groups; slicing cucumber, pickling cucumbers, and specialty cucumbers.

Slicing cucumbers vary in size and color. These cucumbers have a crisp bite and fresh taste that makes them ideal for use in salads or for snacking. They tend not to work well in pickling as they have a softer flesh that turns mushy when pickled. 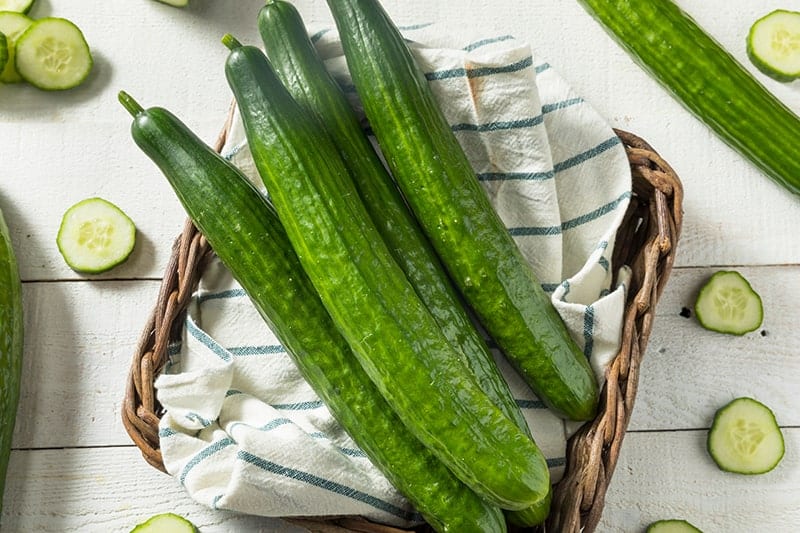 These types of cucumbers are long and slender, with narrower ends. They typically measure somewhere in the region of 10 to 15 inches. They have dark green skin that is smooth or very slightly ridged, and the skin is so thin that the cucumber does not need to be peeled before being eaten. These cucumbers are considered to be the ‘common’ cucumber in most European countries, though they are less common in North America. They have a slightly sweeter taste than common garden cucumbers found in the grocery store and have a very pale green, almost white, juicy flesh. English cucumbers are seedless and are sometimes marketed under the name of ‘seedless cucumber.’ These cucumbers are usually sold in plastic wrap, which extends their shelf life. They are most typically used raw in salads and sandwiches, and they are also great when added to a cocktail such as a martini or G&T. 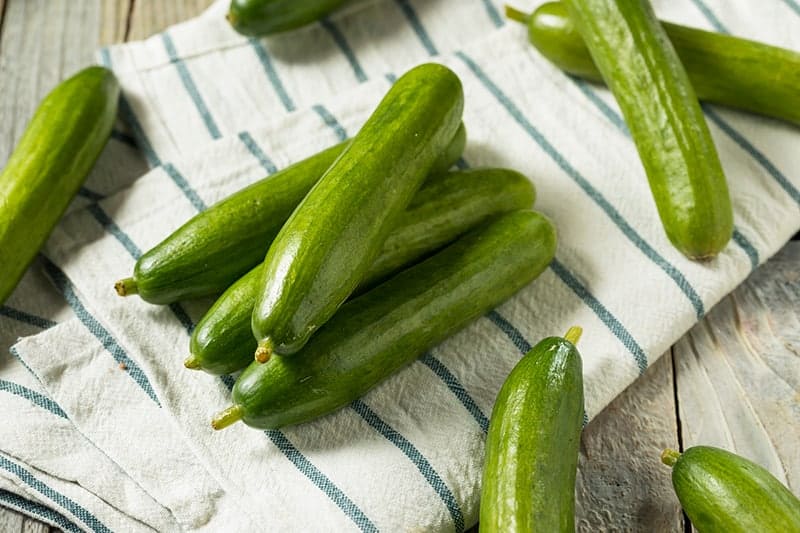 This type of Persian cucumber is great for snacking on as it has a small mature size of between 3 and 5 inches, which makes it easy to see where they get their name of ‘green fingers.’ These cucumbers can be easily grown from seed, germinating in around 7 days and being ready for harvest in 60 days. In regions with mild winters, these plants can be sown in early April and be ready to harvest by late June; they will then continue to produce cucumbers throughout the summer, giving you a long harvest season to enjoy these crunchy fruits. In regions with cold winters, the plants can be planted outside in May, with the earliest possible harvest date being late July. This plant has a vigorous growth habit and will produce vines of up to 5 feet tall, with shallow roots. 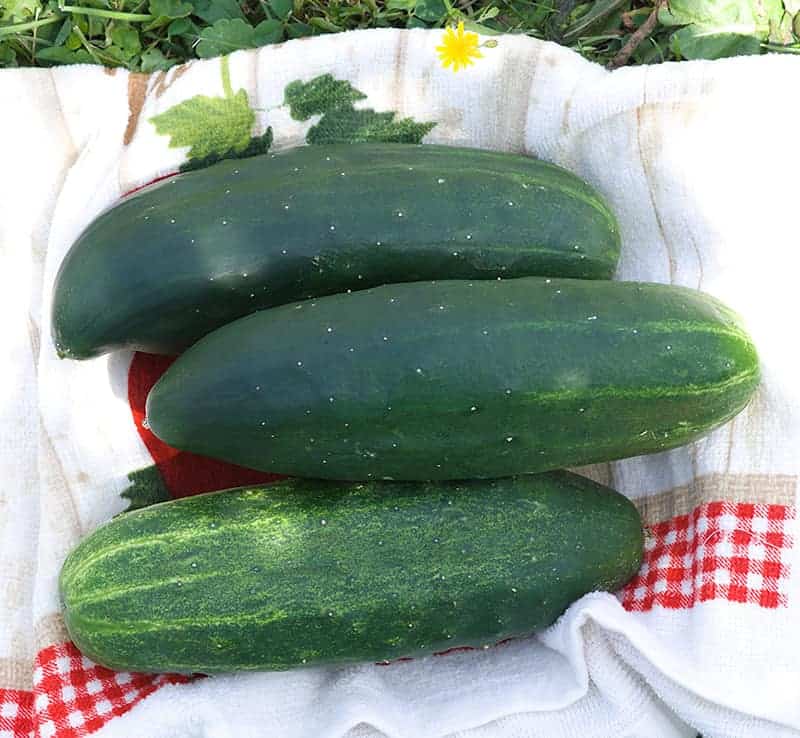 These cucumbers are popular for slicing when mature, at a size of between 8 and 10 inches long, with a width of 2 or 3 inches. However, when young and much smaller, they can be used as pickling cucumbers. These cucumber plants will germinate in between 3 and 10 days and will be ready for harvesting between 58 and 65 days. They are seedless and burpless, which means they contain very little or no cucurbitacin, which is the compound that makes you gassy after eating a cucumber. The skin of these cucumbers is very thin and easily edible, and the fruit is crunchy with no bitterness.

These heirloom cucumbers were developed in Charleston, South Carolina, in 1956. They are especially popular for growing in hot and humid climates, as they are resistant to downy mildew that commonly affects many other types of cucumbers in these climates. Ashley cucumbers take around 65 days to be ready to harvest; at that point, they will measure between 6 and 8 inches long. They are dark green in color and are tapered at the end that joins the stem of the plant. They have a rough texture with some lumps on the skin. These cucumber plants are known for being very productive and are a good choice for home gardeners and are also popular at farmers’ markets in the southern states of the US. They grow well in full sun but will also tolerate some afternoon shade.

This type of cucumber plant produces snack-sized cucumbers that typically measure around 5 inches long when mature. They work well in children’s lunchboxes, for picnics, or snacking on straight from the plant. They have a crisp texture and a refreshing flavor, which also works well when served as crudites on a hot summer’s day. This plant is known for producing a high yield of cucumbers and is suitable for growing outdoors or in a glasshouse. These cucumbers have seedless flesh and a medium to deep green skin that is smooth and glossy. This is a very popular type of cucumber to grow, thanks to the delicious and attractive cucumbers it produces. It is an award-winning variety.

This type of cucumber is ready to harvest in 54 days. It produces large cucumbers that usually measure at least 14 inches long. These cucumbers are seedless and burpless and have a sweet taste that is free from bitterness. Their skin is dark and smooth, and thin enough to be easily eaten so that the fruit doesn’t require peeling. They are ideal for use in salads and other cold, savory dishes. This is an award-winning cucumber plant, which is known for its impressive performance. It is resistant to many types of disease that commonly affect cucumber plants, including leaf spot, scab, and cucumber mosaic virus. 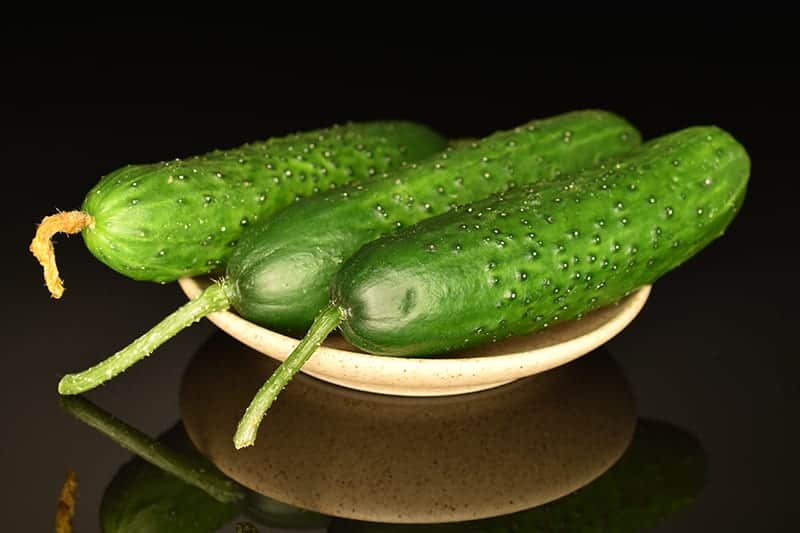 This cucumber plant does exactly as its name suggests; produces straight cucumbers that measure eight inches in length. The fruits have a smooth, dark green skin, and a rounded shape at either end. This is an heirloom variety that has remained popular with home growers for many decades, thanks to its reliable production and dependably delicious cucumbers. It is an easy plant to cultivate and is often chosen as the type of cucumber for children to grow to encourage their interest in gardening. Unlike most cucumbers, which fall into the category of pickling or slicing cucumber, this is a versatile cucumber that can actually be used raw in salads or can also be pickled, though most commonly it is used for slicing. This plant has a trailing habit, with vines that will typically reach between 6 and 8 feet long. It works best when grown on a trellis.

This is regarded as one of the best types of pickling cucumbers you can grow, although the fruits are versatile and can also be used for eating raw. At full maturity, these cucumbers will measure around 4 inches long, and be half an inch wide. They have smooth skin in a medium green shade. These cucumber plants are known for reliably producing large fruit yields. Their fruits are uniform in terms of size and looks, and the vines are disease-resistant. Cucumbers will be ready to harvest between day 45 and day 55. These are compact vines that will suit anyone wishing to grow cucumbers with limited sized space.

This type of cucumber plant dates as far back as the 1920s and has remained popular ever since, due to the exceptionally high yield of fruits it produces. As you would expect from the name ‘double yield,’ this plant is unrivaled in the number of cucumbers it produces. The fruits measure between 4 and 6 inches in length, with rounded ends. The skin is medium green to yellow-green and has occasional black spines. These cucumbers are ready for harvest at around 52 days after sowing. They are perfect for pickling, but they are also great for snacking on straight off the vine.

This cucumber plant won the award for All American Selection in 1978; however, it has fallen out of fashion in recent years and can now be quite difficult to find. The cucumbers produced by this plant have dark green skins and crisp flesh.

This cucumber plant was bred at the University of Wisconsin in the 1980s. It is popularly used as a pickling cucumber when the fruits are small, but you can also leave them to grow for longer on the vine, and they will develop into full-sized cucumbers that are great for slicing into salads. The cucumbers of this plant are dark green, with pale creamy-green stripes. White spines may be present, but these can be easily scraped away. These are easy plants to grow that are self-pollinating and can be trained to trail their vines along a trellis or other support, or will also happily grow sprawled across the ground. These are popularly cultivated plants because they are very resistant to a wide variety of diseases, and they also seem better able to withstand adverse weather or growing conditions. Fruits will be ready for harvest at around 60 days following sowing.

These versatile cucumbers are great for both pickling or slicing. They are ready to harvest on day 57 from sowing and can range in size from 2 to 5 inches in length, depending at what point you remove them from the vine. The fruits are dark green and have white spines. The best thing about this cucumber plant is its resistance to disease; in fact, it is claimed that this is the most disease-resistant type of cucumber plant currently known in the world. It is resistant to downy mildew, angular leaf spot, zucchini yellow virus, scab, papaya ringspot, powdery mildew, watermelon mosaic virus, cucumber mosaic virus, and Anthracnose races 1 and 2. It grows best when supported by a trellis, and will produce straighter fruits in these circumstances. It is expected that this plant will reach between 4 and 6 feet in height when trained.

These cucumbers are visually unusual and are often grown as a novelty. They are rarely seen in supermarkets but may be found at farmers’ markets. 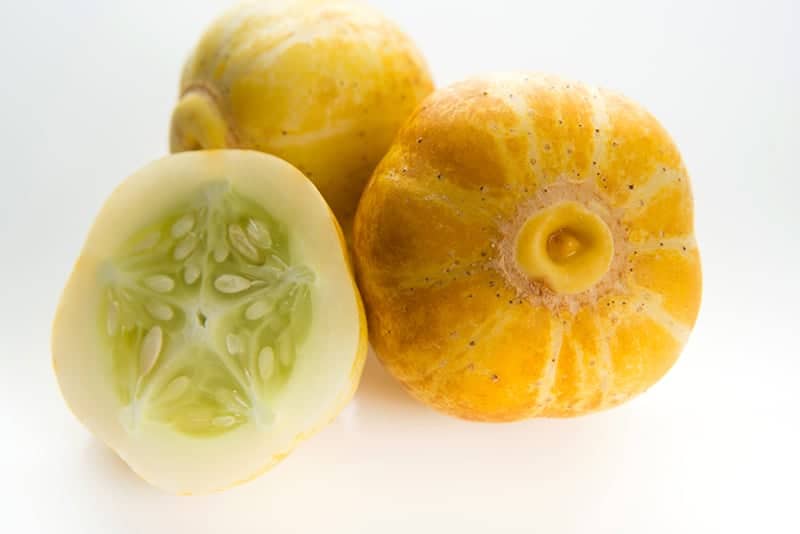 Lemon cucumbers are often grown as a novelty. These plants produce tennis ball-sized cucumbers, at around 3 to 4 inches long. The round cucumbers are lemon only in color and do not have any sort of citrus taste. These fruits taste much like any other cucumber, with a slightly milder flavor. Ther skin is pale yellow with some darker yellow markings, and the skin is thin and easy to eat. These cucumbers are a perfect portion size for one of two people, which is handy if you don’t like to have half a cucumber leftover in the fridge after you have prepared a salad. These cucumbers mature at 65 days. 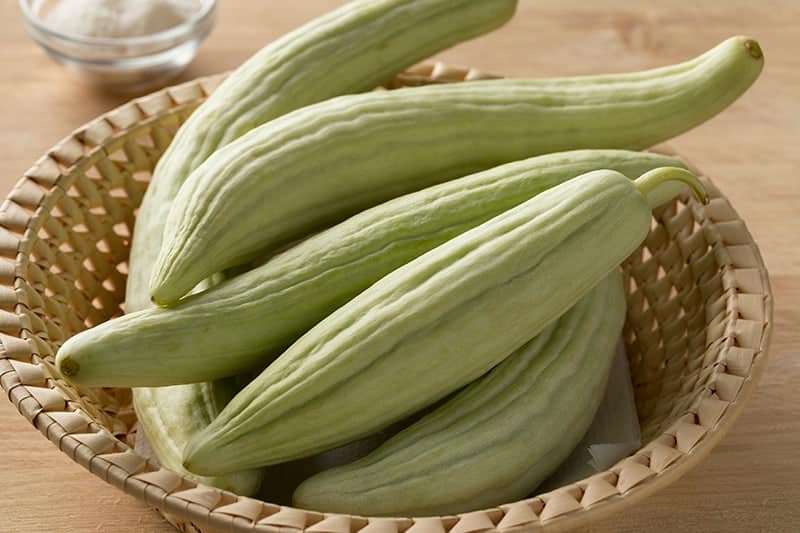 The Armenian cucumber is commonly considered to be a type of cucumber, and although it is closely related to the cucumber, it is actually a type of muskmelon, which is scientifically called Cucumis melo. It does have more in common with a cucumber, though, with a long and slender body, and a pale, juicy flesh that tastes like cucumber. The exterior of this fruit is ridged and can vary in color from medium green to pale green-yellow. These fruits are also sometimes commonly referred to as ‘yard-long cucumbers’ because they can grow so long. They are able to reach lengths of up to 36 inches, but they are best when picked at around 14 inches long, as this is when they are most flavorsome.

These heirloom cucumbers have an unusual look. They are oval-shaped, have pale yellow-white skin, and bumps with black spines. These cucumbers don’t need to be peeled and are excellent for pickling. They are ready for harvest between 55 and 60 days and are best when picked at around 3 inches in length.