Cypress trees are a popular type of evergreen conifer, which remain attractive all year round and are very low-maintenance. They often have a pleasant fragrance when their leaves are crushed, and they are easy to grow in the right climates. There are two main types of cypress trees; true cypress trees and false cypress trees.

True cypress trees are those that belong to the genus ‘Cupressus.’ These are evergreen conifers that are native to warm climates, and they most commonly range in size from medium to large-sized trees. 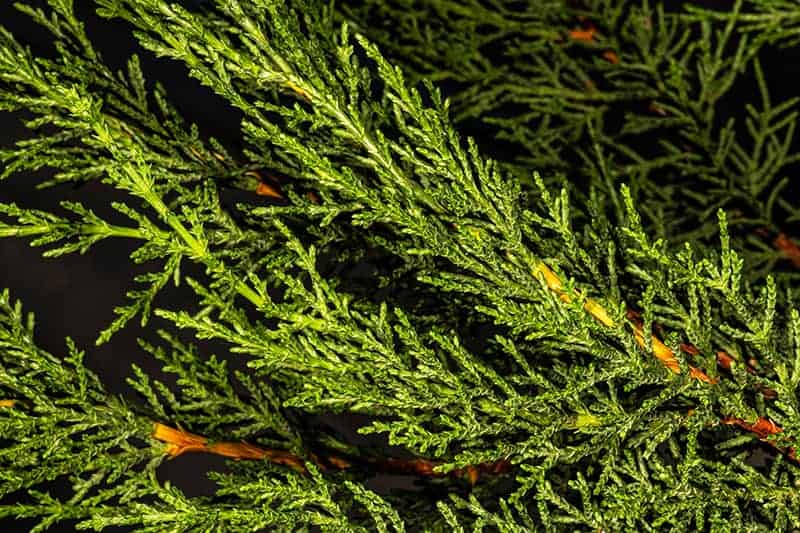 Mature Size: Up to 70 feet tall

This cypress tree is native to the California coastline. It is a fast-growing tree that has a pyramid shape when young, but as it matures, it spreads out sideways to create a wide and irregular canopy with a flat top. This shape is most likely a consequence of the strong winds that are present in the tree’s native habitat. It has deep green scaly foliage that remains green all year round. This tree has an attractive bark, in a rich shade of brown.

It produces spherical cones that are green at first but mature to medium brown and have an uneven surface. These cones usually appear singularly and hand from a short, thick stalk. They measure around one inch across. These trees are popularly cultivated across the world in warm regions, especially in parks and public spaces, as they are attractive trees that provide good shade and are tolerant of high temperatures and drought. In Australia and New Zealand, Monterey cypress trees are cultivated in coastal areas as windbreaks.

These trees are toxic to livestock and should not be grown near cattle farms. Ingestion of any part of the tree has been known to cause miscarriage in pregnant cows. These trees love full sun positions and thrive in well-draining soil. They enjoy even moisture but are also able to survive periods of drought. 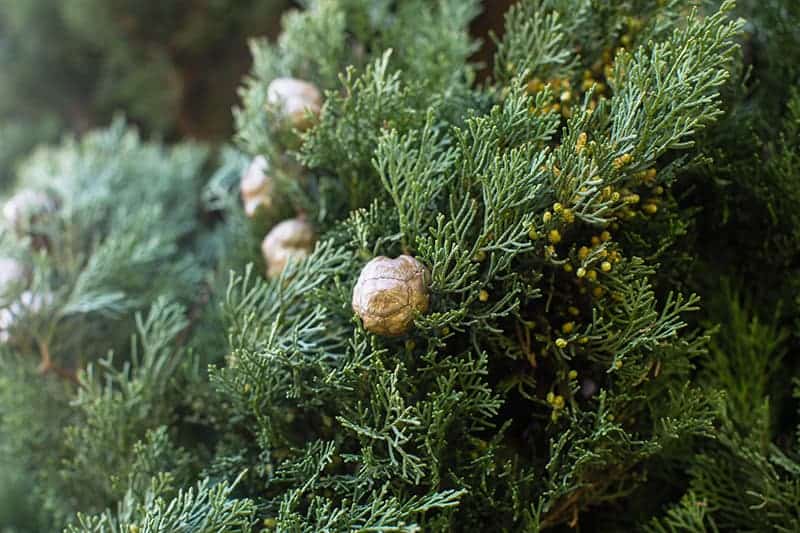 This tree is native to the eastern Meditteranean and is also commonly known as the Meditteranean cypress tree. It is a long-lived tree, with some trees in existence that are over 1000 years old. It is a low-maintenance tree that naturally takes the shape of tall and slender columns that do not need to be pruned. The branches are held at an upwards angle, and the tree comes to a point at the top. The foliage of this tree is blue-green, with scaly needles arranged in short sprays. When crushed between fingers, the leaves release an attractive fragrance.

The wood of the tree is also scented and is known for being very durable. The wood of an Italian cypress was famously used to create the doors of St. Peter’s Basilica in Vatican City, Rome. These trees are popularly cultivated for their ornamental value around the world. They have many interesting qualities and are thought to be resistant to fire. In forest fires that burn huge swathes of land to the ground, Italian cypress trees seem to emerge relatively undamaged.

These trees thrive in full sun and prefer hot and dry climates. They should have evenly moist, well-draining soil when young, but once mature, they develop a good tolerance to drought.

This is a critically endangered type of cypress tree, which is very rare and found only in western Morocco. Small populations of these trees survive in the High Atlas Mountains, but they are old and have very little new growth due to goats that have overgrazed in the area, and the degradation of their habitat through human activity. This type of cypress does have some similarities with the Italian cypress, but the most noticeable difference is that the foliage is much bluer. Each leaf has a small, white resin spot, and the cones of this tree are smaller than that of the Italian cypress, typically measuring less than one inch. They produce durable wood with an attractive scent.

These trees thrive in full sun, hot and dry climates, and have a good tolerance of drought. 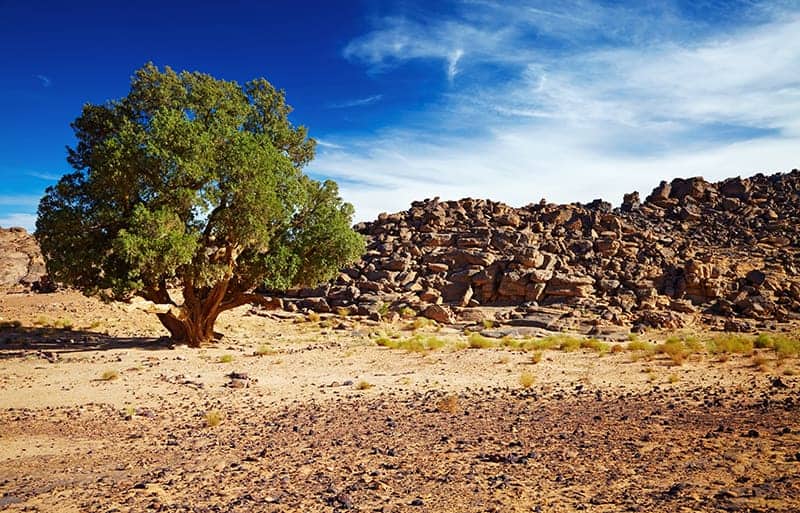 Mature Size: Up to 75 feet tall

Saharan cypress trees are native to Algeria, in the central Sahara desert. They are an endangered species, with only 233 specimens surviving in its natural habitat. These remaining trees form a small population of Saharan cypress trees in the Tassili n’Ajjer National Park, which are hundreds of miles from any other trees. The majority of these trees are believed to be over 2000 years old, and the degradation of the land due to human activity is a large contributor to the fact that little regeneration is occurring.

The tallest of these remaining trees is 72 feet. It has blue foliage, much like the Moroccan cypress tree, but has a different reproductive system to this tree, which is thought to be an evolved characteristic due to its dwindling population. This allows the tree to produce seed without any input from female trees. In some parts of the world, such as Australia and parts of Europe, the Saharan cypress tree is being cultivated in large numbers in an effort to improve its conservation status. They are fast-growing trees with a conical shape when mature.

These trees are very tolerant of drought, surviving in their natural habitat with as little as once inch of rainfall each year. They thrive in hot and dry climates, and positions of full sun, but are intolerant of low temperatures. 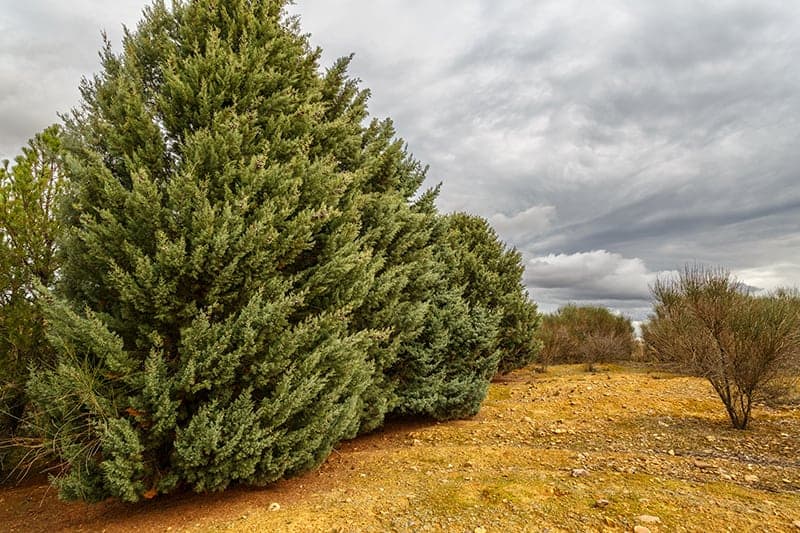 Mature Size: Up to 60 feet tall

This tree is native to Mexico and the southwestern United States. It is typically found scattered in random areas rather than having the tendency to form large forests. The foliage of the tree varies from gray to blue-green and appears in dense sprays of rounded shoots. The cones of these trees range from spherical to oblong shapes, are gray-brown, and measure no more than an inch across. These cones are tightly closed for many years but will burst open to disperse their seeds when their branch is killed, often in wildfire. This allows the fallen seeds to self-sow in the ground below that has been left bare from the fire.

This tree is widely cultivated as an ornamental tree as an alternative to the Monterey cypress because it offers much better resistance to cypress canker and fungal diseases. It forms a pyramid shape and is popular for use as an outdoor Christmas tree, or for erosion control and windbreaks. It thrives in full sun and well-draining soil and is tolerant of heat and drought once mature (University of Arkansas). 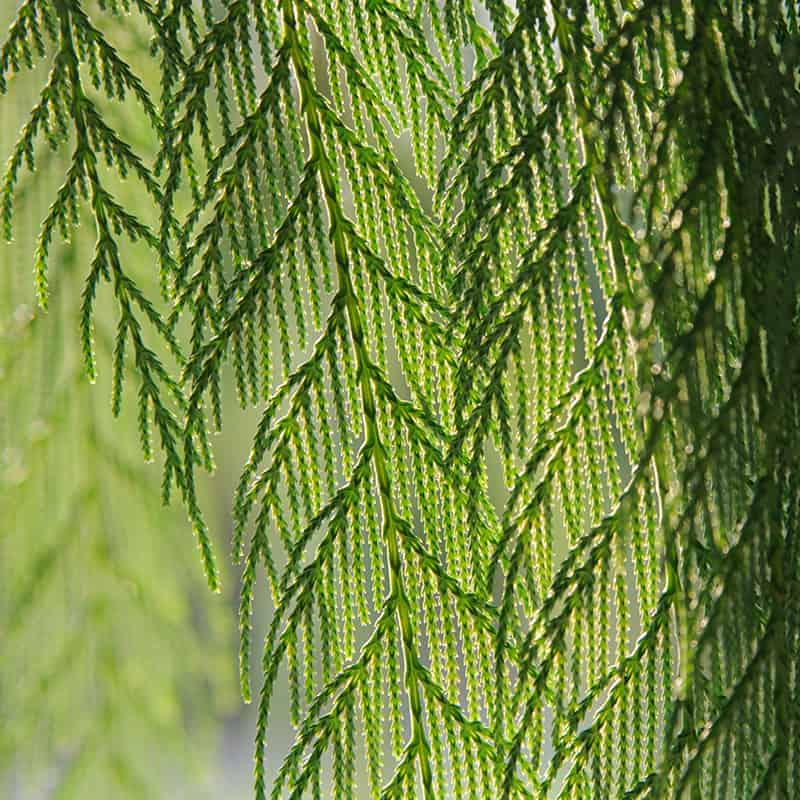 Mature Size: Up to 80 feet tall

This tree is native to China and has been naturalized in Vietnam. It is a medium-sized conifer whose trunk can grow to be as wide as 7 feet in diameter. The scaly foliage of this tree is bright green, and appears in dense, slightly flattened sprays, hanging in a pendulus style from the branches of the tree.

It produces round cones that start out green and mature to a dark shade of brown upon maturity. These cones are considered mature around two years after pollination; at that time, they will open up to disperse their enclosed seeds. The weeping nature of this tree gives it a beauty that makes it popularly cultivated as an ornamental tree. It is kept as a houseplant in some colder regions where it cannot grow outside. 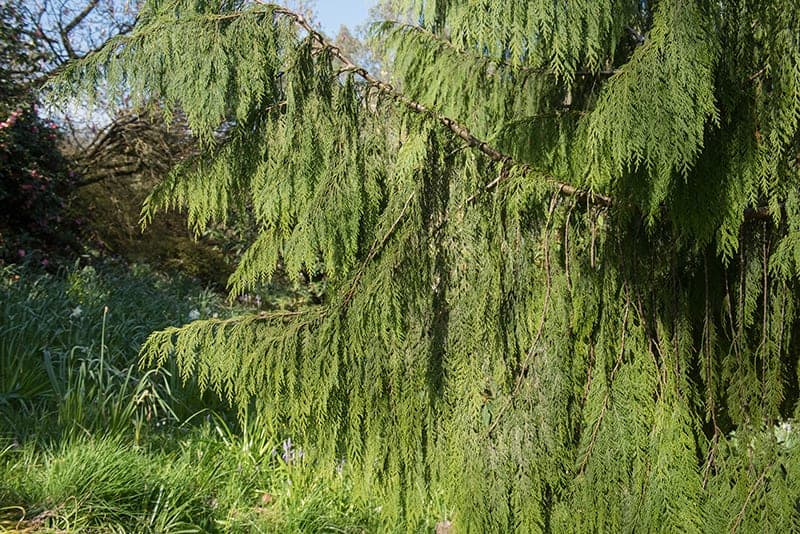 Mature Size: Up to 35 feet tall

For a long time, this tree was considered a true cypress tree, with the scientific name of ‘Cupressus nootkatensis,’ but this was changed to Chamaecyparis nootkatensis in 1841 because the tree has flattened sprays of leaves, unlike most true cypress trees. This has since been disputed on the basis that the cones of this tree are genetically more in keeping with other true cypress trees, notably the fact that they mature over two years and not one. The true species that this tree belongs to is still a highly debated topic and a matter of contention for many. It is native to North America, where it is found all along the west coast from Alaska down to California.

It has a loose pyramid shape with semi-pendulous branches that give it an informal look. It grows best in climates that do not get too hot in the summer, as it is not tolerant of heat. It will grow in full sun or partial shade, but partial shade is preferred, especially in climates where temperatures soar during summer months.

It is widely cultivated in public spaces and works well when trained to grow as a tall hedge. This tree is known to produce some of the best timber in the world and has been used for shipbuilding, flooring, and cabinetry.

It should be grown in well-draining soil that is kept evenly moist. It can be difficult to grow in some conditions and needs a light soil that is preferably acidic. 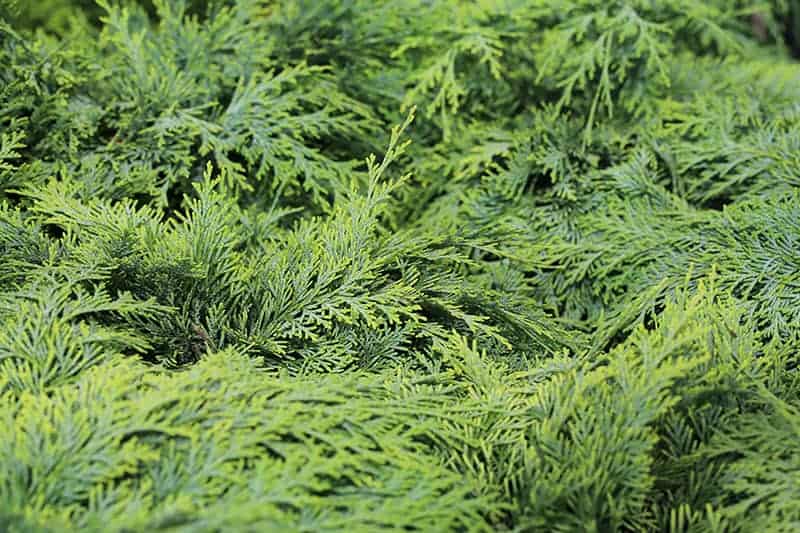 This large evergreen tree is native to the western United States, namely California and Oregon. There are examples of this tree growing in its native habitat where it reaches heights of almost 200 feet, though, in cultivation, it typically tops out at much smaller heights than this. There are many cultivars of this tree that will not grow more than ten feet tall, making them ideal for garden planting.

The foliage of this tree grows in flattened sprays in a blue-green color. The leaves have a feathered texture, with small white markings on the underneath. The wood of this tree is known for having a fragrance reminiscent of ginger. It is very rot-resistant and is especially sought after in Japan, where it is predominantly used in the making of coffins. This tree has a medium growth rate, and depending on the cultivar, can range in shape from tall and narrow to wide and rounded. It grows well in full sun or partial shade and should be planted in well-draining soil that is kept consistently moist. 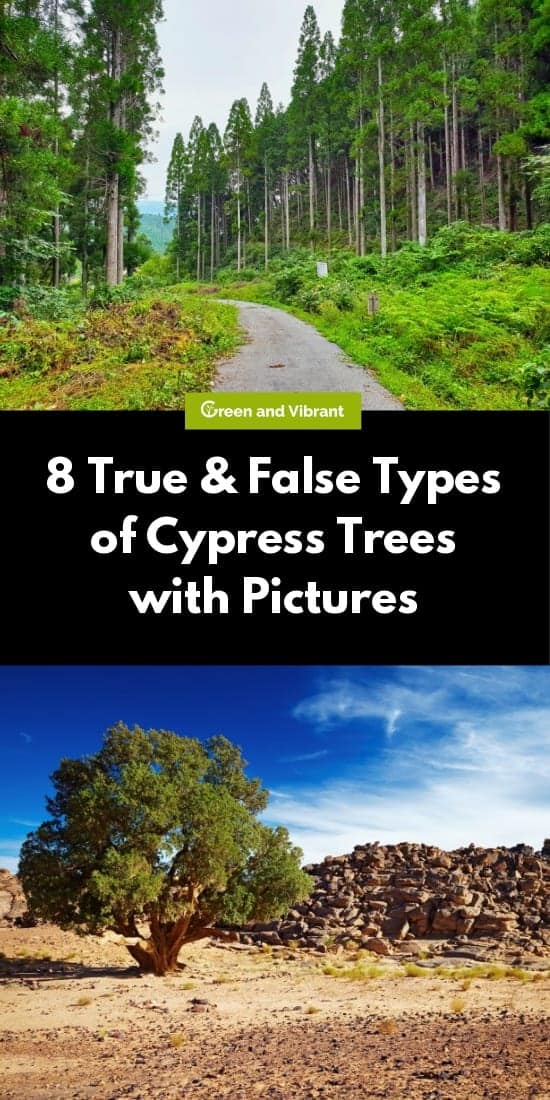