Ivy plants are climbing evergreen vines that offer great versatility in the home garden. There are many types of ivy to choose from, depending on your climate and what you want from your ivy plant.

Ivy is typically a low-maintenance plant, making it ideal for beginner gardeners or those who don’t want to spend too much time tending to their yard. Ivy also tends to grow vigorously, offering quick results for anyone wanting to transform their garden over a short space of time.

Some of the best types of ivy include the following. 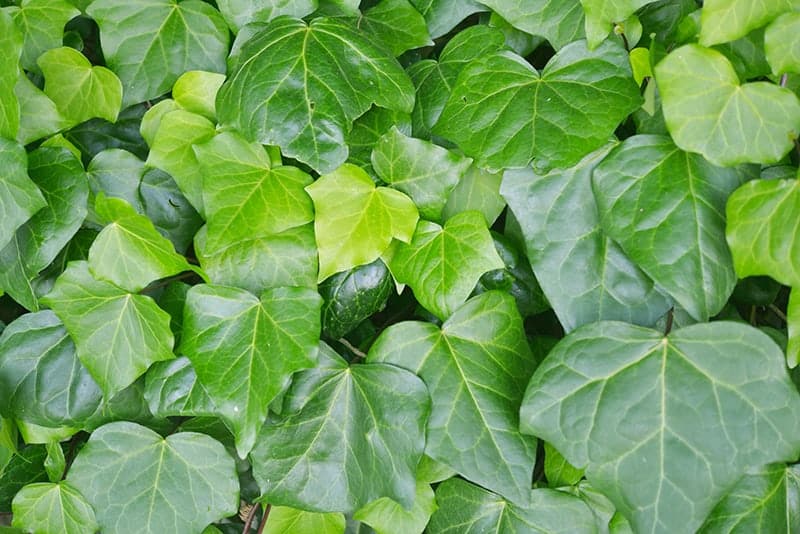 Mature Size: Up to 100 feet in height

English Ivy is the most commonly planted ivy plant in North America and Europe. It has glossy dark green lobed foliage, with the ability to grow as tall or long as 100 feet. It has a vigorous climbing habit, which means it is ideal for growing on unappealing structures that you might want to hide, such as the side of a garage or a fence.

As well as vertical climbing, English ivy is a prolific trailing plant, making it suitable for use in hanging baskets or in elevated beds. It is also commonly used as a groundcover, creating a green blanket over the soil surface between shrubs and trees.

English Ivy is very hardy, being able to tolerate a range of conditions including frost, snow, heat, wind, and poor soils. Due to this, English ivy is an excellent plant to have in your winter garden, offering greenery when many other plants fail to survive. One of the only ways to kill this plant is by overwatering it, which will cause its roots to rot. As a result, English ivy should be planted in well-draining soil so that excess water will drain away from the plant.

Aside from this, English ivy has very little care requirements. It prefers a position with some shade, and will even thrive in full shade. It is extremely low-maintenance and versatile, making it a brilliant plant for a variety of situations. It also works well as a houseplant and is one of the most effective houseplants available at filtering toxins from the air.

However, the ease with which English ivy is able to thrive also makes it problematic in some areas, as it continues to grow even where it is not wanted. For this reason, it is now considered to be an invasive species in New Zealand, Australia, and 18 states in the US.

There are over 500 cultivars of English Ivy: some of the most popular include:

‘Goldchild’: The foliage of this plant is variegated, in gray-green with yellow margins. It will produce the most pronounced colors in continual moist soils with a good amount of sunlight, though even in the shade distinct variegation remains. This plant grows quickly but has a smaller mature size than other English ivy plants. ‘Goldchild’ has been a recipient of the Award of Garden Merit from the Royal Horticultural Society, and it was also named 2008 Ivy of the Year by The American Ivy Society.

‘Needlepoint’: This ivy plant has a dainty and elegant appeal. Its foliage is dark green with 3 or 5 lobes that are slender and pointed. The leaves are close together, giving the impression of a dense green carpet when used as a groundcover.

‘Ivalace’: This plant has interesting foliage that curls in on itself to give the look of lacy cupped leaves. It has a compact habit, growing up to 3 feet tall with a 4-foot spread. It works well as a houseplant, as well as various outdoor locations. ‘Ivalace’ has been awarded the 2011 Ivy of the Year title by The American Ivy Society.

‘Tripod’: The foliage of this plant is dark green, and as the name implies, the leaves have 3 lobes. Each lobe is long and slender in an exaggerated arrow shape, giving the plant a whimsical appeal.

‘Caroline Crinkle’: The foliage of this plant has 5 lobes, and each lobe has 3 jagged-edged fingers. Leaves are dark green and have a strong festive feel.

‘Golden Curl’: This plant benefits from curled leaves and variegated foliage. Leaves are dark green with a yellow margin, which is again edged in green. Lobes of this ivy’s leaves are less pronounced than others.

Mature Size: Up to 40 feet tall

This plant features heart-shaped leaves spanning between 4 and 10 inches long. They are the largest leaves of any ivy plant and can appear in variegated or solid colors depending on the cultivar. Persian ivy is tolerant of occasional periods of drought, though it prefers to have consistently moist soil. It is also more tolerant of heat than most other ivy types but performs best in shaded conditions.

Persian ivy has a vigorous growth habit and can become a problem if it is left to grow unchecked. Keep a close eye on this plant and prune it dramatically when necessary to keep it from choking nearby plants. 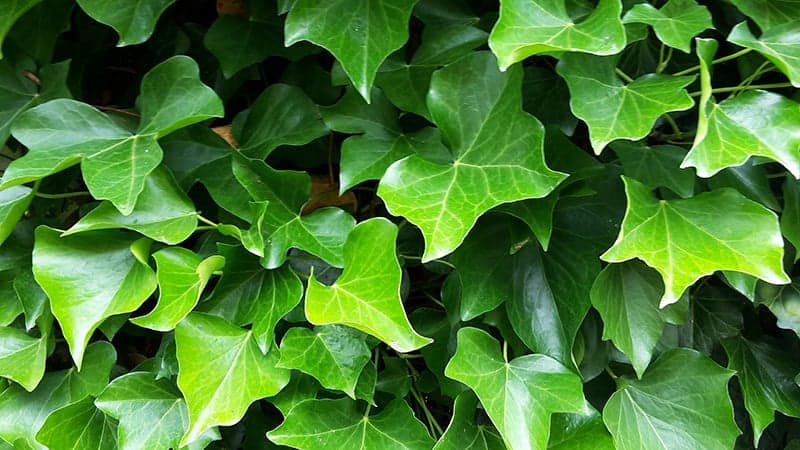 Mature Size: Up to 100 feet in height

Irish ivy (also known as Atlantic ivy) is a close relation of English ivy, and in fact, it can be difficult to tell the two apart. They require similar growing conditions and strongly resemble each other’s appearance. Foliage is a glossy deep green with pale veins, and leaves have 5 lobes.

Irish ivy is found growing in the wild in countries surrounding the Atlantic Ocean, including Ireland, Germany, Spain, and France. It can thrive in any lighting condition, from full sun to full shade, but prefers a balance of both sun and shade. Consistently moist soil is best for this plant, but it will still grow in less than ideal soil conditions.

It produces tiny yellow flowers in September and October, which are succeeded by small black berries, an important source of food for birds and wildlife, but poisonous to humans and pets (Royal Horticultural Society). 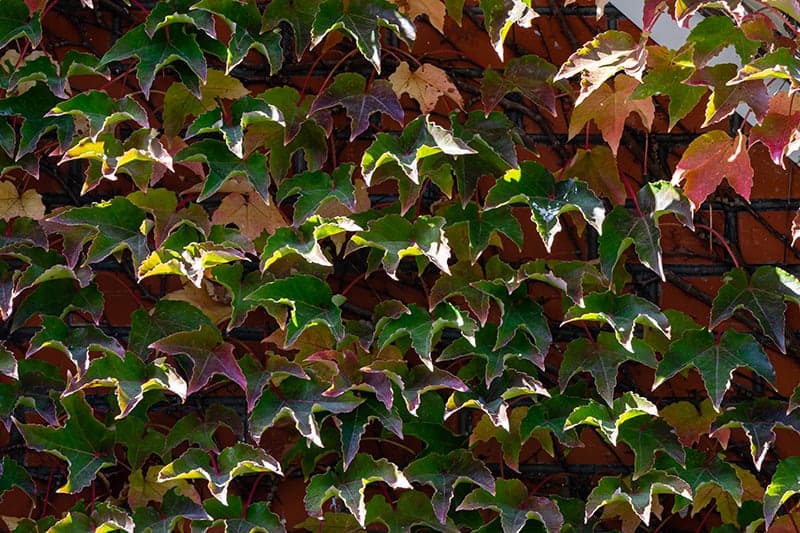 This plant is native to East Asia, where it grows commonly on slopes and tree trunks in forests and woodlands. It is an evergreen woody climber, which also works well as a groundcover in lieu of a vertical structure to climb.

The stems of the Japanese ivy are purple, and the foliage is a glossy mid-green shade. The leaves of this plant are said to be the shape of a rhombus, hence the botanical name of ‘Hedera rhombea.’ The plant produces clusters of small yellow-green flowers that develop into small blue-black berries. Variegated cultivars of Japanese ivy exist, which feature cream streaks. 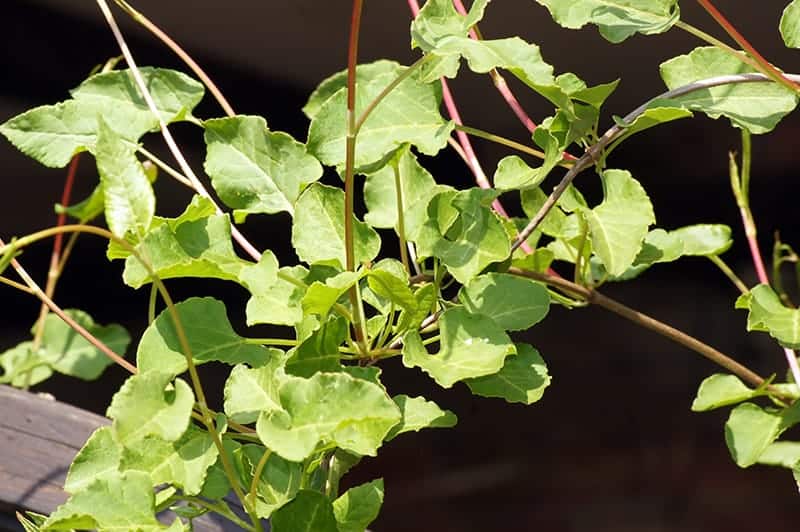 This ivy is native to Russia, Armenia, and Iran, and is sometimes referred to as Iranian Ivy. It is an evergreen climber, reaching heights of up to 100 feet with support. Unlike many other ivy plants, Russian ivy does not crawl and will therefore not work well as a groundcover, and instead should be planted alongside a structure it can climb.

It is considered an evergreen perennial in USDA hardiness zones 7 to 12 but can be grown in colder climates as an annual. The foliage of this ivy is mid-green and has a stretched heart-shape going into a deep point. A popular cultivar of Russian ivy is the ‘Ann Ala,’ which has gained recognition from the Royal Horticultural Society, who awarded it with the Award of Garden Merit. 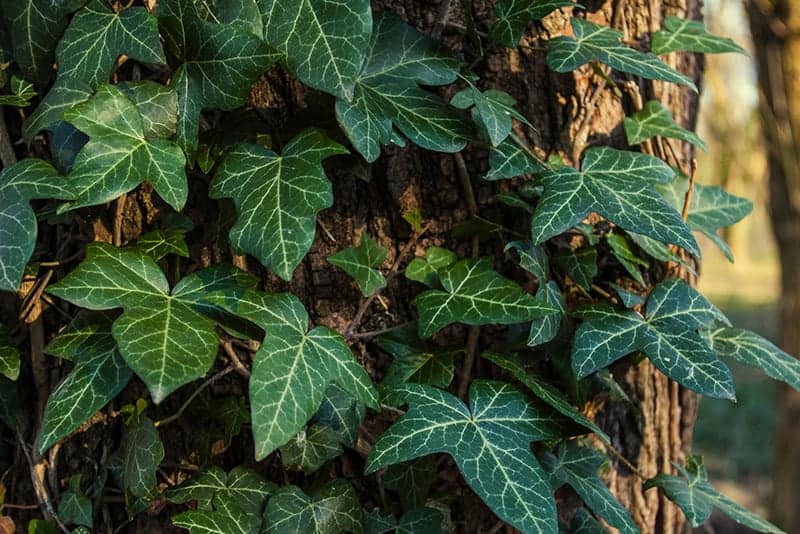 This plant is native to Nepal, as well as Vietnam, India, China, Laos, Thailand, and Myanmar. It is accustomed to growing at high altitudes in the mountains, and is sometimes referred to as ‘Himalayan Ivy.’

The foliage of Nepalese Ivy is leathery, dark green and glossy, in a lobed shape that is instantly recognizable as part of the Hedera genus. Leaves can range in size from small to large, and provide the background to simple yellow flowers that bloom from October to April.

This plant is tolerant of low temperatures and frost, though it is sensitive to heat. It should be positioned in a partially shaded spot, with an emphasis on shade in the afternoon when the sun is at its most potent. Nepalese ivy is not commonly seen as a cultivated species in gardens or public spaces but is prolific in its native region. 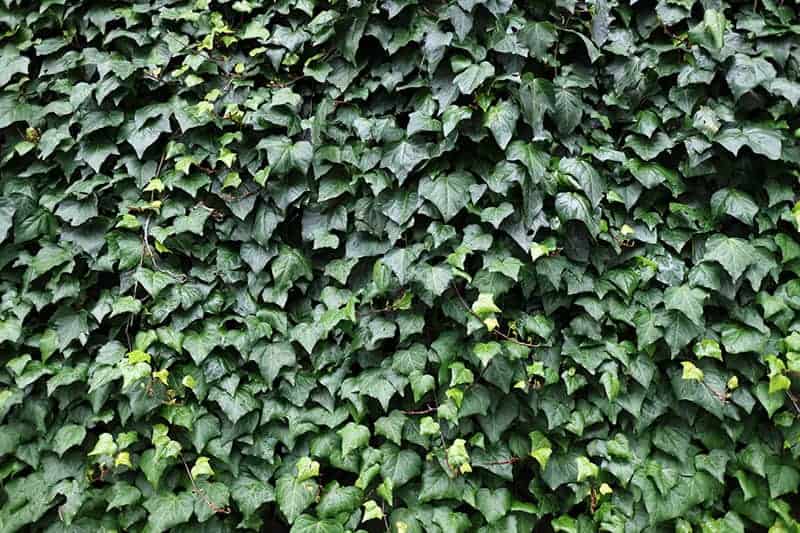 Also known as Algerian ivy and North African ivy, this plant is native to North Africa and the Canary Islands. Despite hailing from warmer climates, Canarian ivy is quite hardy, tolerant of cold, frost, poor soil, sun, wind, salt, and pollution. It shares a lot of similarities with English ivy, though most notably, its leaves are much larger.

The Canarian ivy is possibly the most dramatic of all ivy plants, with large glossy foliage that can measure up to 8 inches long. This plant also grows even more vigorously than English ivy, which is quite an achievement! It becomes established very quickly and climbs or spreads from aerial roots.

This plant requires consistently moist soil, though it is less susceptible to suffer from problems than English ivy if you have a sporadic watering habit. Position this plant in a partially sunny spot, ideally with afternoon shade. It is more tolerant of the sun than English ivy but would prefer a few hours of respite from the sun where possible.

Variegated varieties of this plant are less suited to cold weather and should only be grown outdoors in warmer climates; however, if you are a fan of this plant, then consider giving it a home indoors as a houseplant, where it will appreciate the warmth and bright indirect light. 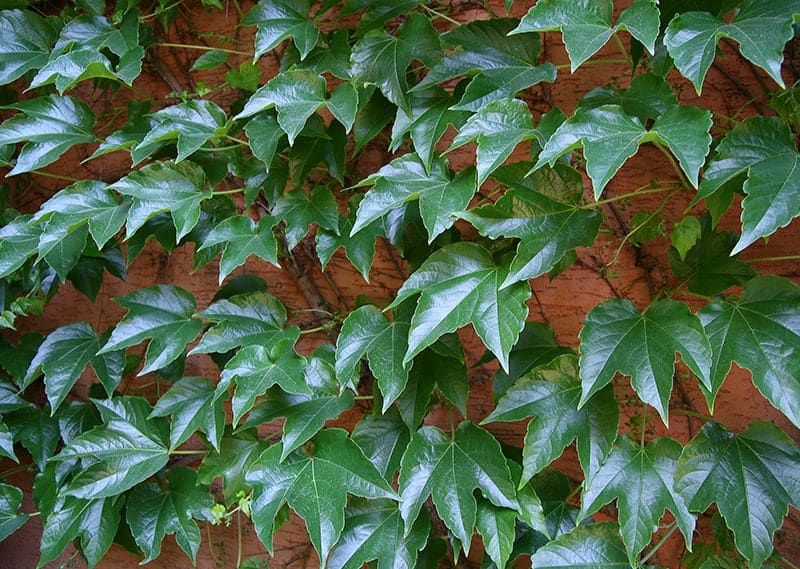 Mature Size: Up to 50 feet tall

Boston ivy is not a ‘true’ ivy as it is not part of the Hedera genus; however, it is commonly known as an ivy plant. It is native to East Asia and is actually part of the grape family (Vitaceae). Unlike true ivy plants, the Boston ivy is deciduous and loses its leaves following a fall display of bright red and purple foliage. This plant produces clusters of green flowers, which are followed by dark blue grapes. 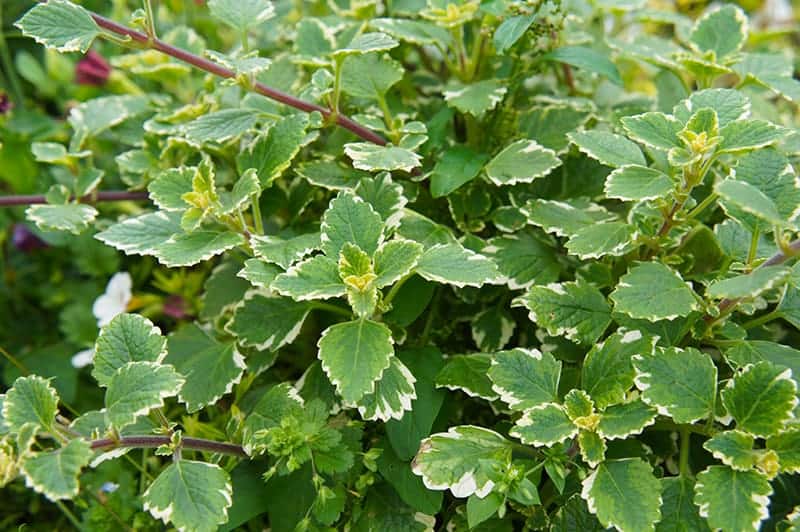 Mature Size: Up to 3 feet

Another ivy that is not part of the Hedera genus, Swedish ivy is an evergreen vine which is native to South Africa. This plant works well as ground cover in small areas or as a bedding plant, as the vines reach a maximum length of 3 feet and therefore aren’t best suited for use as a climbing plant.

Swedish ivy thrive is a partial shade or dappled sunlight, and consistently moist soil. When grown in full sun, the plant will have stunted growth and struggle to reach its maximum expected size. It produces white to purple flowers throughout the year, amid glossy green, ovate foliage (Missouri Botanical Garden). 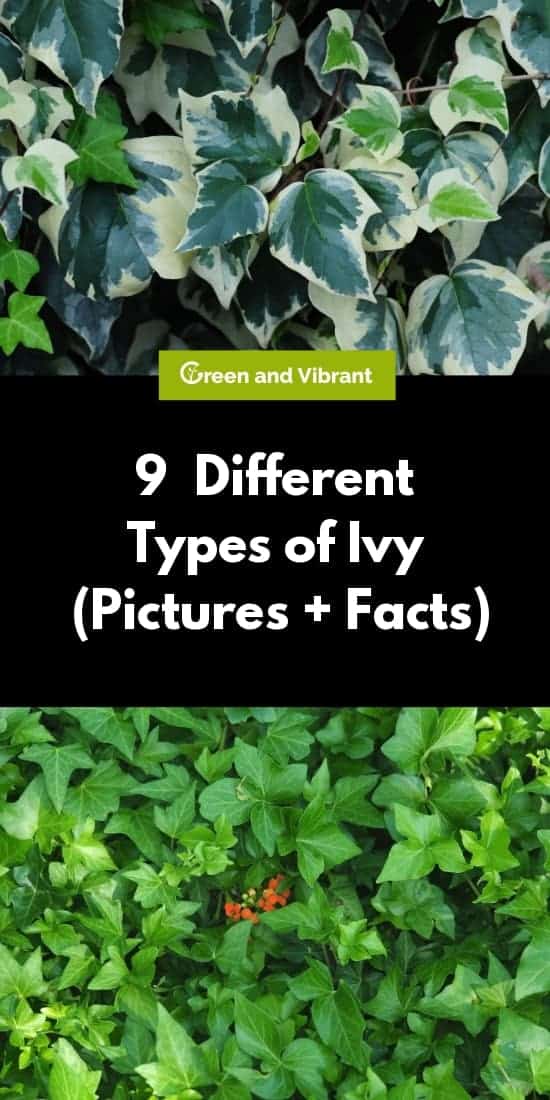