Do You Know Your Growing Zone? i Growing zones help determine if a particular plant is likely to grow well in a location. It identifies the average annual minimum winter temperatures across the U.S. provided as a map by the USDA.

There are more than 100 species of pine trees across the globe ranging from short, tidy shrubs, to tall trees touching the sky. They are all evergreen, and all have cones, but they differ greatly in size and shape. Many pines are drought-resistant and easy to grow, making them well suited to the suburban landscape.

How to Grow Indian Hawthorn

How to plant Indian hawthorn

Indian hawthorn is a tough shrub that can handle both clay-heavy and sandy soils, as long as the soil drains well, which gives you some freedom in siting it. The plant appreciates full sun but can handle afternoon shade if necessary. If you’re planting more than one shrub, space them three to six feet apart, depending on your variety. The plant tag should tell you how wide your shrub will get.

Dig a hole that’s twice as wide as your specimen’s root ball and the same depth as the planting container. Examine the root ball carefully and tease apart any roots encircling the ball so they don’t girdle the bush and eventually kill it. Dig a few shovelfuls of compost, leaf mold, or other amendment into the soil, and place your shrub so the top of the root ball is even with the soil.

Backfill the hole (replace the dirt you removed) with the topsoil you amended with compost and tamp it down lightly around the shrub. Water deeply until the ground is saturated.

How to achieve maximum results

Indian hawthorn is a resilient plant that thrives with little care and provides an evergreen focal point for gardens in zones 7-11. Keep the shrub well watered during the initial few months after planting until you see robust new growth appearing on the branches. Once it has acclimated to its location, your Indian hawthorn will only need water during severe drought periods.

How to Care for Indian Hawthorn

Once established, Indian hawthorn is quite tolerant of drought and should only need supplemental watering in the driest of conditions. Keep an eye on the shrub if you haven’t gotten rain in a while and water if the leaves appear to droop.

The Indian hawthorn doesn’t need much fertilizer. Digging some compost into the soil around the shrub is generally enough to provide it with the nutrients it needs. If you prefer, you can give it a light feeding of a general-purpose fertilizer twice a year, in spring and fall.

Indian hawthorn is monoecious, meaning each plant has both male and female flowers. Because of this, you should have good flowering even if you only have one shrub. They are pollinated through the actions of insects such as honeybees, so they benefit from being planted near other nectar-producing flowers and shrubs that encourage these insects.

Although Indian hawthorns don’t require diligent pruning, you can clip the shrub to form a hedge, ball, or another shape after it has flowered in the spring. At that time, remove any dead or diseased limbs. You can also deadhead the flowers after it’s finished blooming to tidy up the plant.

Insect pests include aphids, black vine weevils, flatheaded borers, and fuller rose beetles. A general insecticide will limit their presence. If you are growing in an organic setting, beneficial insects such as ladybugs, which prey on aphids, will control the pests.

Common diseases of the Indian hawthorn include fire blight, powdery mildew, and verticillium wilt. A fungal disease called entomosporium leaf spot is also common, and appears as red spots surrounded by a yellow halo on older leaves, causing leaf drop. A copper fungicide will help remedy this disease, as will maintaining good sanitation around the bush.

These plants thrive in full sun but will tolerate some shade, preferably in the afternoon. Indian hawthorns do not like to be transplanted and can react badly if you attempt to dig them up and move them, so plan ahead when positioning your plant and ensure it is in the sunniest spot in your garden. If the plant does not get enough light, it can become stretched and gangly looking in its efforts to search out the light, destroying the neat and compact form that the plant is famed for.

Due to its small size, the Indian hawthorn works well as a container plant, and the benefit of this is that you can easily move the plant to a different area of your garden if you find that the original position doesn’t provide the plant with enough light.

This evergreen shrub maintains its foliage all year long, with the deep green leaves becoming tinged with purple throughout winter. The Indian hawthorn does rely on mild climates to survive the winter, where deep freezes are unlikely to occur. It can tolerate temperatures as low as around 5 degrees Fahrenheit, but any lower than this will see the plant die back to the ground. It grows well all year round in southern climates and is tolerant of high temperatures going up to the mid ’90s.

Indian hawthorns can be propagated from stem cuttings. This is ideally done in autumn during the plant’s dormant period. To prepare the plant for cutting, water it generously the previous evening, and then proceed with cutting the following morning. This will ensure that the stems are well-hydrated and make for more successful propagation.

Select a stem which is approximately a quarter-inch in diameter, with soft leafy growth at the tip. The cutting will need to be between six and eight inches long, with all of the lower leaves removed. Once you have prepared your cutting, you can prepare a pot filled with a moist growing medium such as peat and compost. Create a hole in the soil to a depth of three or four inches, and dip the raw end of your cutting in rooting hormone before inserting into the hole in the soil. Firm up the soil around the cutting to secure it, then place it in a warm shaded spot and maintain moist conditions.

After four to six weeks, your cutting should have rooted. You can check this has happened by gently pulling on the stem to feel for resistance. After roots have formed, wait a few more weeks for roots to develop further before transplanting the cutting into a larger pot. Select a pot one or two inches wider, where the plant can live in light shade throughout the summer. It can be planted into its permanent spot the following autumn, either directly into the ground or in a container pot. The next spring, it should be in full sun.

The flowers of this plant grow in clusters of at least three inches across. Each individual bloom grows to just under an inch across, with five petals that are mildly fragrant. The flowers appear in late spring and are typically white in color, though some cultivars will produce pink blooms. In late summer, the plant produces berries that are deep purple or blue-black and prove to be very popular among wildlife. 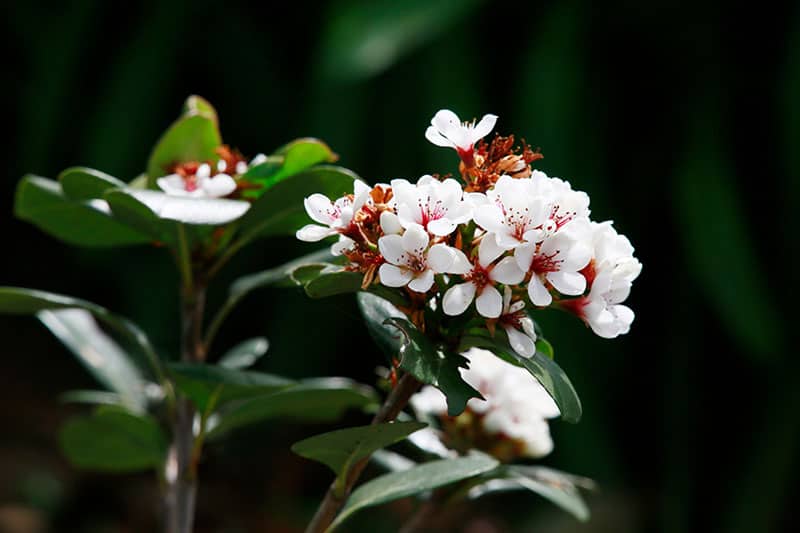 This common Indian hawthorn can be recognized by its green leathery leaves with rounded edges. The star-shaped flowers it produces are always white. It is a more tender species than the similar Rhaphiolepis indica. 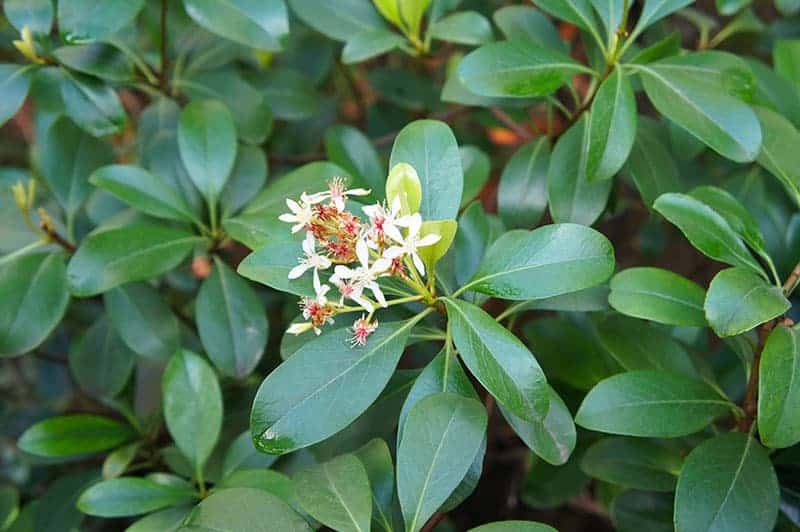 This Indian hawthorn is differentiated by its serrated foliage, and flowers that appear in both pink and white. It can survive in colder climates than the more common Indian hawthorn.

This smaller variety of Indian hawthorn grows to be up to three feet tall and four feet wide. Its flowers are a crisp white, a stark contrast against the dark green foliage, which transforms to a bronze shade in the autumn.

This variety produces pink flowers and is able to bloom twice a year, in both summer and fall. It can grow to a height of two feet, and its foliage is gray-green. The berries are such a deep blue that they can be mistaken for black.

This Indian hawthorn hybrid is unusual in that it grows to great heights, up to 24 feet tall and ten feet wide. It blooms in spring with creamy pink flowers.