Different Types of Oranges To Grow Or For Consumption (with Pictures)

Orange trees are a hot climate fruit-producing plant that typically thrives in hot, dry regions in full sun, with moist and well-draining soil. There are many different types of orange you might want to consider when it comes to growing orange trees or buying oranges for consumption. These are the main types of oranges available:

Bitter orange trees were cultivated in Spain as early as the 10th century and were later introduced to North America. They can now be found growing in the wild across Florida and wooded areas of the Bahamas. These oranges have a high acid content that makes them bitter tasting. Due to this, they are generally not eaten raw. Some bitter orange trees are cultivated to make marmalade and also for the production of essential oils. Bitter orange can also be found in some perfumes and in herbal medicine. 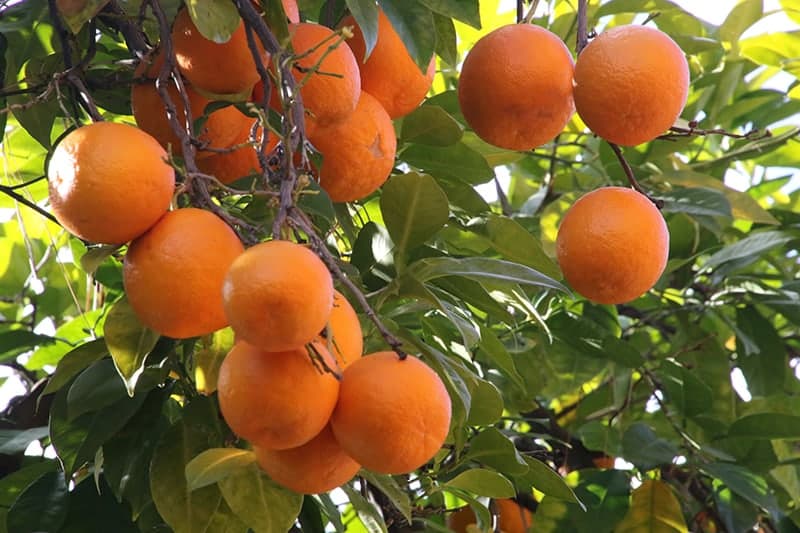 Seville orange trees are a hybrid that results from the crossing of a pomelo and a mandarin. These sour oranges are small to medium in size, typically measuring around three inches across. They are generally round but sometimes have a flattened round shape. They have a thick, dimpled rind, which is an orange-yellow color. Beneath the rind lies a thick layer of white pith that is dense and spongy. The flesh of the Seville orange can vary from yellow to dark orange. It is acidic and sour tasting. These oranges are usually separated into twelve segments that are divided by layers of white pith. They typically contain many creamy colored large seeds.

These oranges get their name from the fact that they were widely cultivated in the city of Seville, in Spain, after being introduced from Asia in the 12th century. The orange trees lined the city streets and became synonymous with Seville. This Spanish city is still home to a large amount of Seville orange trees, but most of these fruits get exported to England. Their bitter flavor means that they are rarely eaten raw and instead are commonly used in cooking. Seville oranges are most popular for their use in producing marmalade. 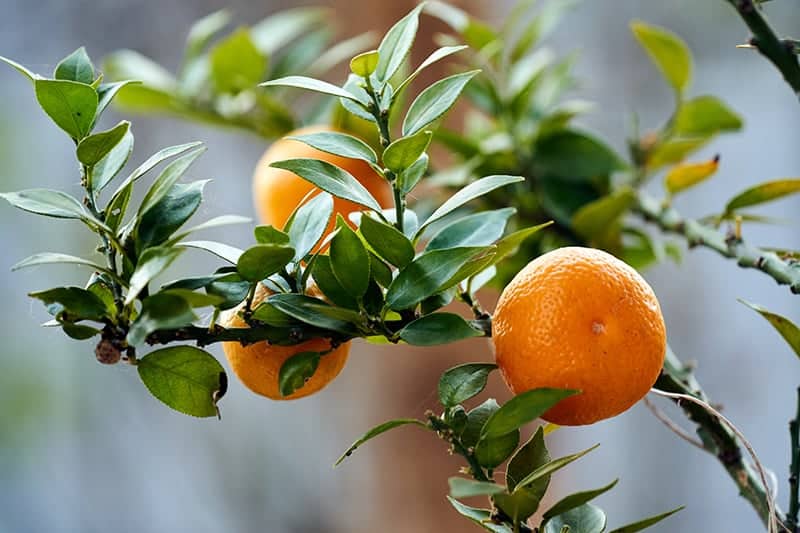 This tree is also commonly known as the myrtle-leaved orange tree due to the similarity of its foliage with the common myrtle tree. This is a small tree that grows to a maximum of ten feet tall, making it ideal for growing in planters. It is native to Europe, growing primarily in Italy, France, and Malta. It grows slowly, producing small dark green leaves and pretty white flowers with yellow-orange stamens.

The oranges of this tree are fairly small, with a thick rind and moderate amount of seeds. Their sour flavor means that they are not typically cultivated for their use in food and drink, and instead, this tree is prized mostly for its ornamental value. The exception to this is the alcoholic aperitif from Italy called Campari, which uses chinotto oranges for flavoring.

Common oranges are sweet fruits that you would eat raw, or juice to produce orange juice. The vast majority of commercially produced orange juice comes from common oranges. There are many types of common orange, which are widely grown across hot climates around the world. 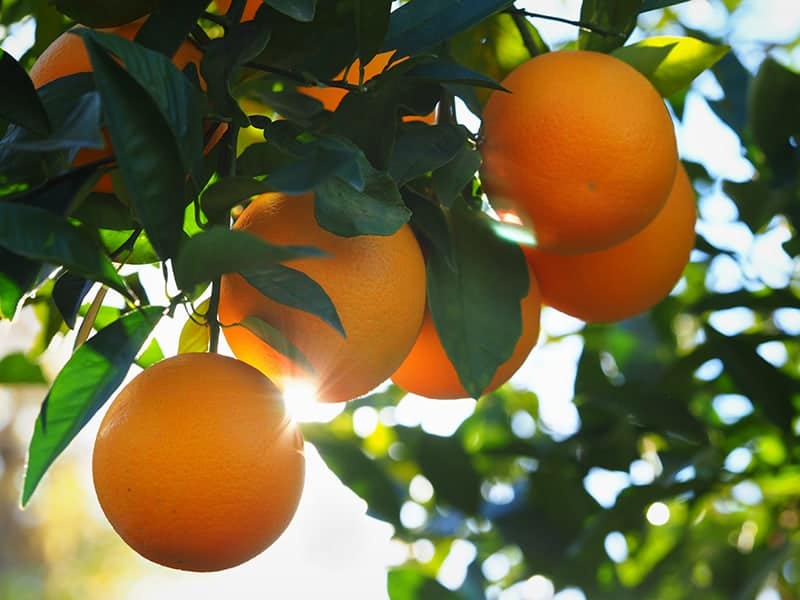 This hugely popular orange tree is cultivated worldwide for its use in producing fresh orange juice. It was first created via hybridization on a farm in California in the mid-1800s and was named after Valencia in Spain, which was known to produce deliciously sweet oranges. The tree was subsequently grown to such an extent in orchards in California that the area of Valencia, California, was named after the orange.

The fruits of this tree measure around three inches in diameter when mature and have a deep orange flesh that makes for a vibrantly colored juice. These trees are popular not only for their brilliant flavor but also the fact that they are the only orange trees that have a summer fruiting period. 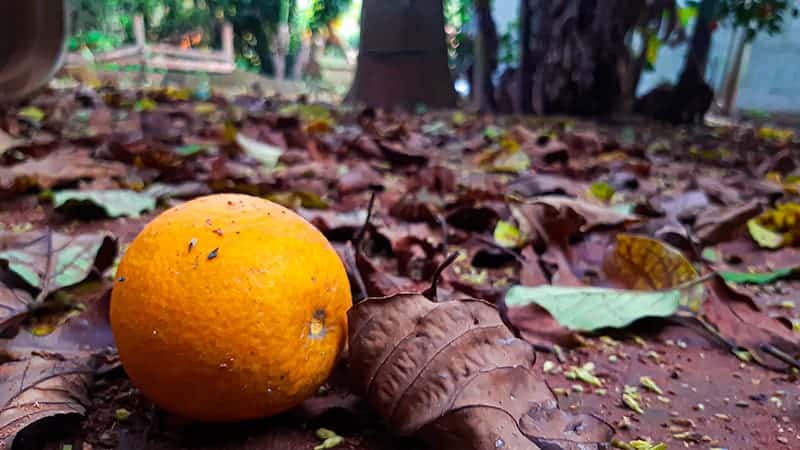 This orange tree is known for being one of the hardiest among types of sweet oranges and can be grown in USDA hardiness zones 8-10. It is an early ripening variety that is ready to harvest between October and January. These trees have a typical mature height of between 12 and 14 feet and grow best in full sun to partial shade. The oranges of this tree are deliciously tangy, with thick skins and few seeds. It is great to be eaten raw and also works well for juicing.

Blood oranges are a naturally occurring mutation of Citrus sinensis, which have deep red flesh as a result of higher levels of anthocyanin. The peels of blood oranges also often have a slightly pink or red hue, and the taste of these oranges is rich with a hint of berry flavor. 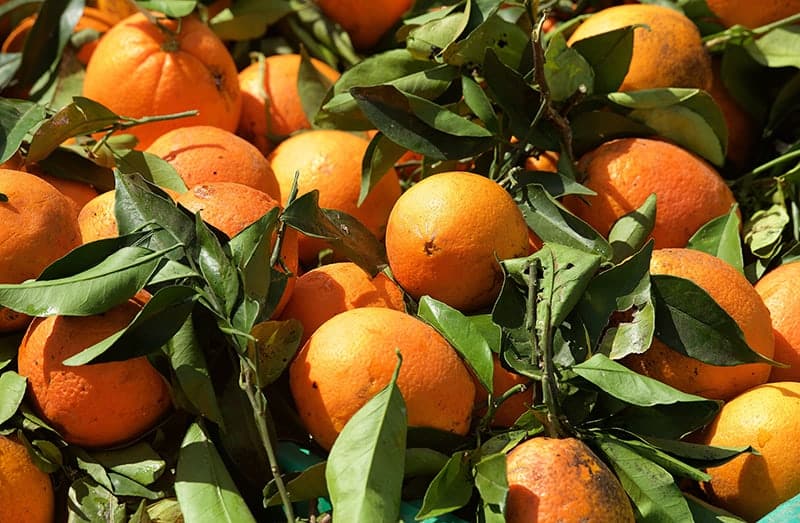 These trees have a vigorous growth habit and produce large yields of blood oranges. The oranges have thin skin with pale red coloring and a deep red inner flesh. The color of the fruits will be best when the tree is grown in hot and dry climates with cool overnight temperatures. It fruits during mid-season and is ideal for eating raw or juicing. 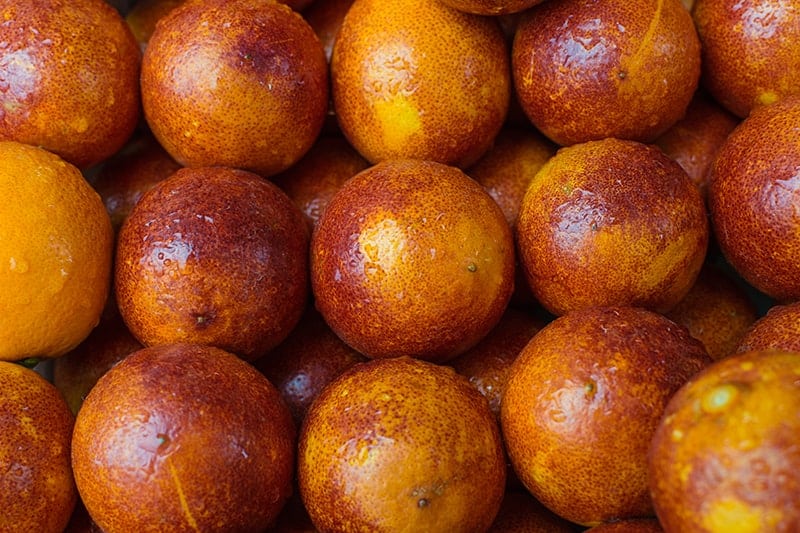 These small trees grow up to ten feet in height, making them ideal for growing in containers. They are native to Spain, where they were discovered in 1929 and are still extensively grown in Spain and are also cultivated in Brazil, the United States, and Egypt. The trees produce fruits in mid to late season and typically measure around three inches in diameter. They have a thin skin that is orange with red hues and a juicy, almost seedless flesh that can range in color from orange-red to deep burgundy.

These fruits have a tart flavor with a hint of cherry. They are suitable for eating raw in salads, smoothies, or in desserts, and they can also be juiced and used in making syrups, cocktails, and sauces. It is also popular for use in producing marmalade. This variety is the most popular blood orange consumed in Spain today and is traditionally served with serrano ham and toasted bread.

Navel oranges are a result of a mutation from a common orange tree, which occurred in the early 19th century. These fruits were found to have a second fruit growing within them at one end of the orange, the opposite side to the stem. Where this second fruit was forming created an indentation on the outside of the orange that resembled a human navel, hence the name ‘navel orange.’ These types of trees can grow to 30 feet tall, though many varieties are dwarf trees that mature at much smaller heights. 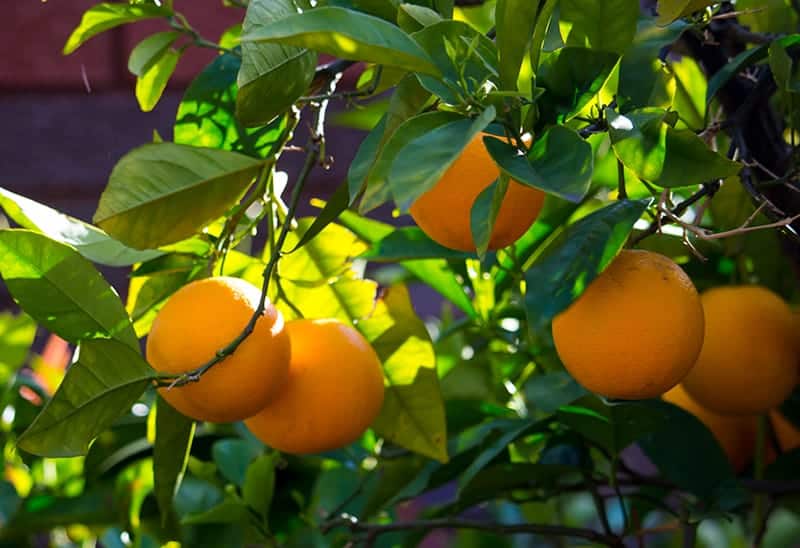 This tree is the most widely grown orange tree among home gardeners in the United States. It is suitable for growing in USDA hardiness zones 9-10 and grows to a mature height of between eight and fifteen feet, with a spread of up to ten feet. They have a slow to medium growth rate and produce a high yield of fruit. This is an early fruiting variety of navel orange, which will be ready for harvest in early winter.

Oranges from this tree are seedless and easy to peel, with segments that easily separate. They have a deliciously rich flavor and are perfect for eating raw as a snack or in salads and desserts. This tree is also grown for its ornamental value. It has a rounded canopy of deep green leaves and produces white, waxy flowers that have an intense citrus scent.

These navel oranges were discovered in Japan. They produce fruits several weeks earlier than the Washington navel, but its oranges are significantly smaller, making it a less popular variety among home growers. These fruits have a leathery rind of medium thickness that has a slightly pebbled texture. The rind is an orange-red color, and the flesh inside is juicy and seedless. They are sweet tasting thanks to their low acid content and have highly aromatic skins. They can be eaten fresh or used to make orange juice.

Mandarins are not technically oranges, but instead are small citrus trees, scientifically known as Citrus reticulata, which produce citrus fruits with orange skins. These fruits have a lot in common with true oranges in terms of both flavor and look, and they are considered by many people to be a different variety of orange. In fact, the mandarin is a parent to the true orange, producing orange trees when crossed with the pomelo. 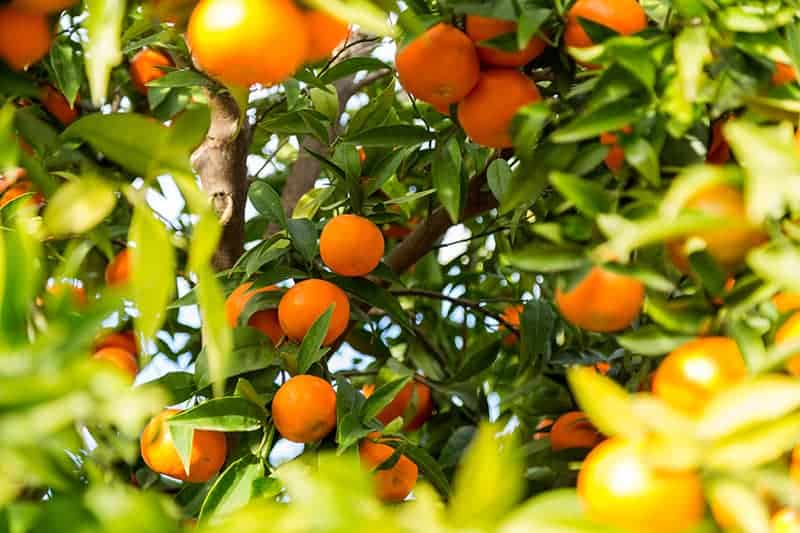 The clementine mandarin was introduced in the US in 1909 but originated from North Africa. This tree fruits early, from late fall into winter and is known for its ability to produce mandarins on low total hours of heat. These fruits are the smallest type of mandarin oranges, and they are super sweet with thin skin that is easy to peel. These characteristics make these fruits very popular among children and a favorite in school lunch boxes and for picnics. Their skin is glossy and smooth, in an attractive bright orange-red color. 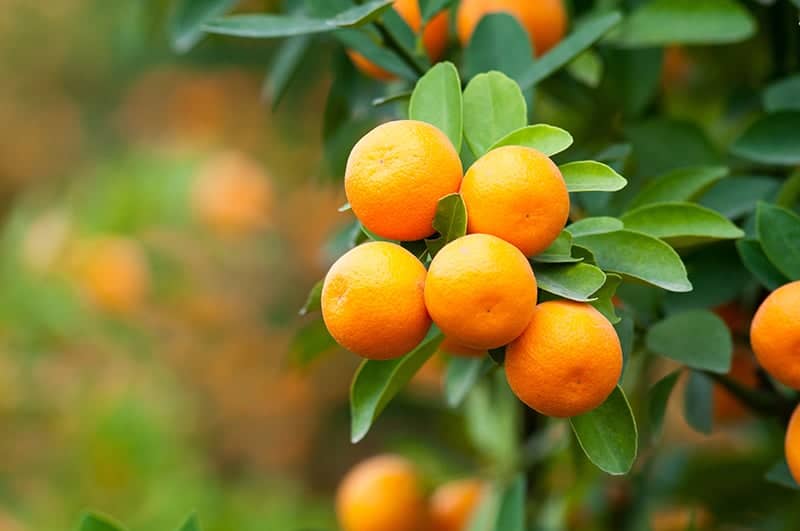 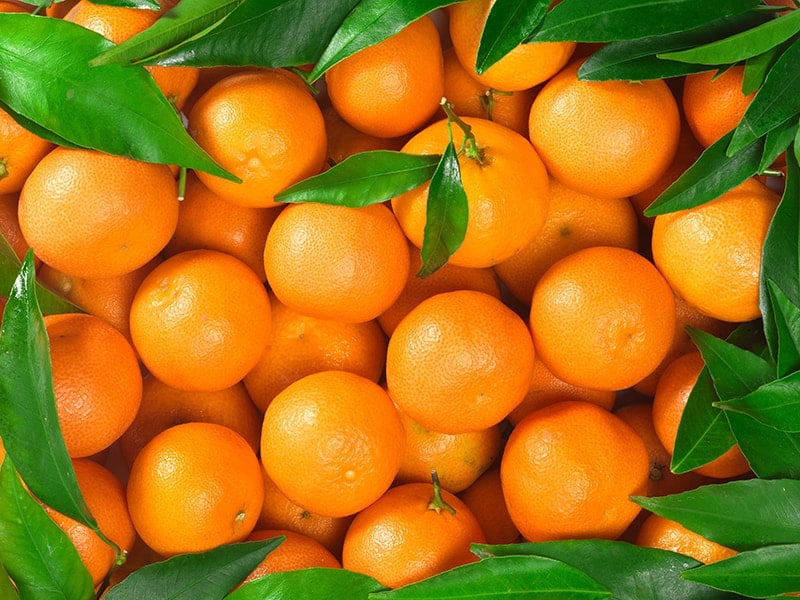 Tangerine mandarins are a type of mandarin orange that can be identified by their dark orange-red skin. Their skins are easy to peel, with a pebbly texture. It is thought that these mandarins are native to Southeast Asia and got their name from the fact that they had to travel through Tangier, a port in Morocco, to reach the United States. They are sweet but not as sweet as most other types of mandarin oranges.

These oranges, as their name suggests, have very little acid content. This makes them sweet and not bitter. Their lack of acid means they have a short shelf life, as it is the acid content of most oranges that helps to preserve them once they are harvested from the tree. Because of this, acidless oranges are rarely found in grocery stores but might be seen at local markets. These fruits are primarily eaten fresh and raw and can also be used for juicing. 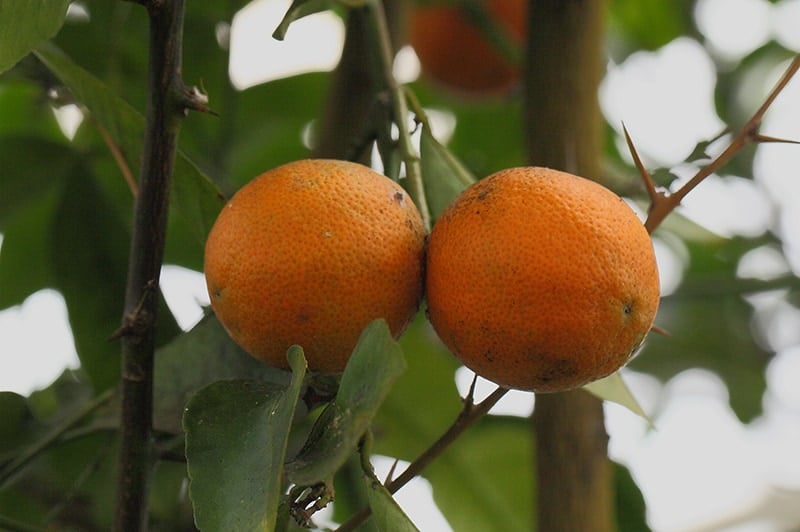 These fragrant oranges have a medium rind that is thick and leathery. They are native to China but are now primarily cultivated in Brazil, and Mediterranean countries, with a few orchards, also found in California and Florida, US. They are not cultivated for export due to their short shelf lives and instead focus on local fresh consumption.

Credit to Forest and Kim Starr

These orange trees produce almost entirely acidless fruits, with a very sweet taste. This type of orange tree is small to medium sized, with a rounded canopy. It is believed to originate from Italy. The oranges it produces have a rind of medium thickness, which is bright orange. Inside, the flesh of the orange has a distinctly pink hue, which is caused by a carotenoid called lycopene. Despite its coloring, this is not a blood orange. The low acid content of these oranges gives them a very short shelf life, so they are only eaten by those living locally to the orange trees.