Parts of a Plant and Their Functions (With Diagram) 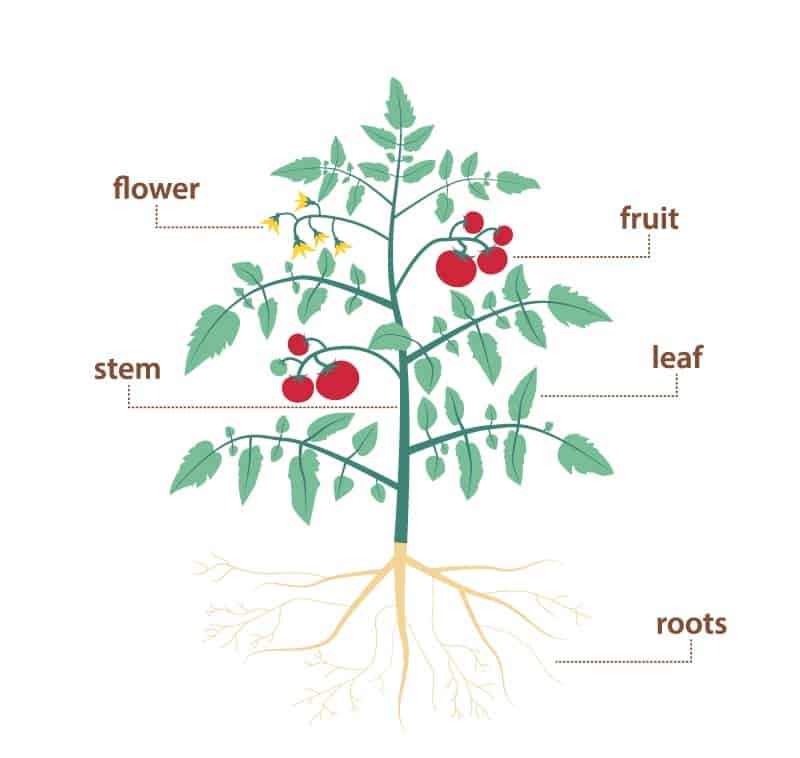 While it’s fair to say everyone is familiar with the key parts of a plant, few are equipped with deeper knowledge about a plant’s biology. By learning the functions of each part of a plant, we can better understand a plant’s needs and therefore become better at caring for our plants to get the most out of them.

The roots of a plant are the lower section of the plant attached to the stem at its base. They are an essential part of the plant’s survival, tasked with the responsibility of anchoring the plant to the ground and also seeking out moisture and nutrients to be delivered to the plant and enable it to grow.

The roots, in most plants, stay underground and are an ‘invisible’ part of the plant to most who view it. The roots often extend far into the ground, spreading deep and wide to ensure the plant has plenty of food and drink within its reach. Some plants, such as grasses, have shallow fibrous roots that appear similar to tiny hair-like fibers. Other plants, like larger shrubs, have strong thick roots with complex root systems that fulfil the important role of giving the plant stability so that it doesn’t get blown over or damaged in storms, along with providing the plant with its required nutrients which are absorbed by the roots from the soil and carried to where the plant needs them.

Taproots are another type of root that is present in some plants, such as carrots and potatoes. Taproot systems extend vertically into the soil and are quite chunky in size and appearance, storing food for the plant (University of Illinois Extension).

For epiphytes, which are plants that live on other plants and trees in their natural habitat, aerial roots are commonplace. These roots grow outward into the air instead of growing underground in soil, and absorb moisture from humid air to survive. Plants with aerial roots include orchids, which even when kept in pots as houseplants, typically have aerial roots extending outside of the container. Interestingly, though healthy roots which have space to spread and grow are essential to the survival of almost all plants, there are some plants which can grow without any roots at all.

Air plants (Tillandsia) are an example of root-free plants. These exist in the wild in very humid locations where their leaves are able to absorb all the moisture and nutrients they need from the air.

The stem is the central part of the plant. It is the midsection between the roots and the leaves or flowers, and its main function is to carry moisture and nutrients from the roots to the rest of the plant. There are different types of cells within the stem that perform their own functions.

The xylem cells transport water from root to leaf, while the phloem cells transport food in the form of nutrients. As well as being the middle-man connecting the roots to the leaves and flowers and distributing the necessary water and nutrition, the stems also perform the function of giving the plant stability. Stems need to be sturdy in order to carry the weight of their upper leaves and flowers and can take many different forms depending on the plant. Petite plants with delicate flowers might have slender stems, whereas the stems of trees and shrubs will be more trunk-like, being thick and woody.

What most stems have in common is the way that they grow upward. This is important to allow all of their leaves access to sunlight, which is essential for the healthy growth of the plant.

Leaves are where photosynthesis occurs, transforming the water and minerals that the roots have collected and that the stems have distributed and turning them into glucose which is food and energy for the plant. For photosynthesis to take place, the leaves make use of sunlight, carbon dioxide, water, and chlorophyll. Most leaves tend to be green, thanks to the presence of chlorophyll. However, variegated leaves with white patches on can be found in many species of plants, and these patches appear pale due to the absence of chlorophyll. As chlorophyll is essential to perform photosynthesis, these leaves will typically require higher levels of sunlight in order to thrive.

The leaves themselves take many forms, from feathery fronds on ferns to needle-like leaves on conifers and pine trees, but regardless of their aesthetics, leaves all perform the same basic function of transforming water and nutrients into food the plants can utilize. Most leaves take the shape of a thin flattened structure. This enables the most surface area to be exposed to the light. Plants typically grow in a fashion in which their leaves are spread out and evenly spaced to allow light to equally penetrate all of them, without too many of the leaves becoming shaded.

As well as performing photosynthesis and thereby producing food for the plant, leaves also are able to store water (in the case of succulents, for example). These swollen leaves hold onto water so that in the case of drought, the plant has enough water reserves to survive. 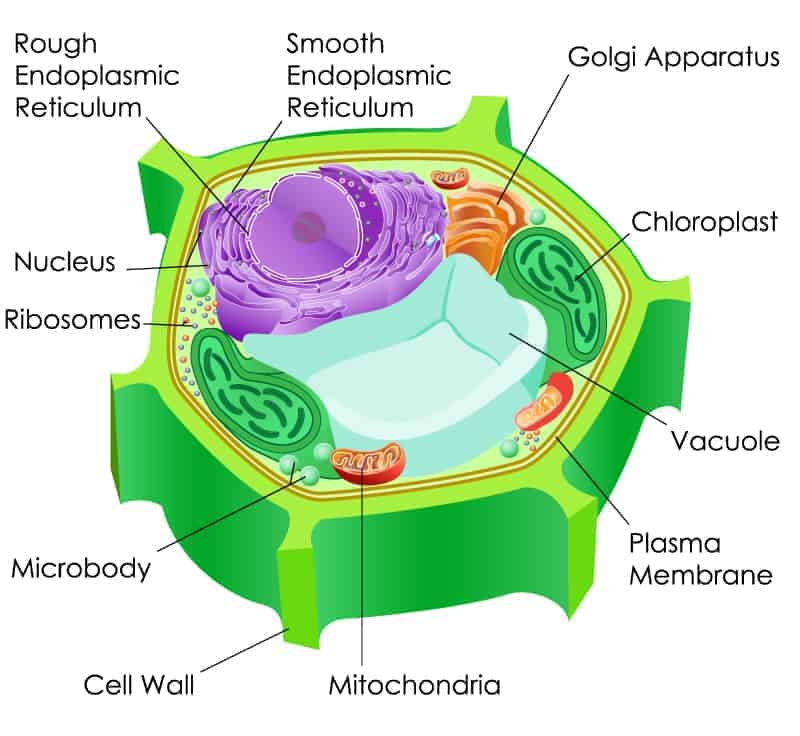 A cell is a unit that contains many organelles, carrying out different functions and forming the basis for all living organisms. Plant cells are known as eukaryotic cells. This means that they have membranes that contain complex structures within them. Within the cell are several different parts that are responsible for various functions to keep the plant alive. The key components within plant cells include the following.

The nucleus is the control room of the plant cell and is the most important part of any plant cell. It takes on a spherical shape and contains the DNA of the plant within its chromosomes, holding on to all of the plant’s genetic hereditary information. It is responsible for coordinating all of the metabolic functions, including cell growth, protein synthesis, and cell division. By taking care of this, the nucleus regulates all of the functions of the cell. Contained within the nucleus are also other organelles, some of which produce ribosomal RNA.

The main function of the smooth endoplasmic reticulum is to produce, digest, and transport lipids and proteins. It is a membrane structure surrounding the rough endoplasmic reticulum, and it lacks ribosomes, which is why it is smooth. It is primarily responsible for moving material through the cell.

These organelles are interesting in that they are only found in plant cells. They contain chlorophyll, giving the foliage of the plants their green color and aiding in the process of photosynthesis. The function of the chloroplast is to capture sunlight to conduct photosynthesis.

The cell membrane is responsible for protecting the cell from the external surroundings. It contains fats, lipids, and proteins, which are formed together in a thin layer to create a wall around the cell’s organelles. Liquids are able to pass through the cell membrane when necessary, so it is also able to regulate the transference of matter required for the continued existence of the cell’s organelles.

The cell wall is another protective wall. However, this one is firm and fairly inflexible. Its rigid properties make it resistant to outside forces and allow it to maintain and support the form of the cell. It is made predominantly from cellulose fiber and also has the function of preventing the cell from growing too big.

Ribosomes are granular-like substances of Ribonucleic acid that create proteins from amino acids. It is the home of protein biosynthesis, building, and synthesizing proteins.

The vacuole helps to maintain cell shape and regulates the cell’s internal environment. It is a water-filled sac that stores waste products and nutrients, isolating anything that is deemed harmful to the cell and disposing of it. It protects the cell from any unwanted materials by exporting them away from the cell.