Fogponics – How to Grow with Fog 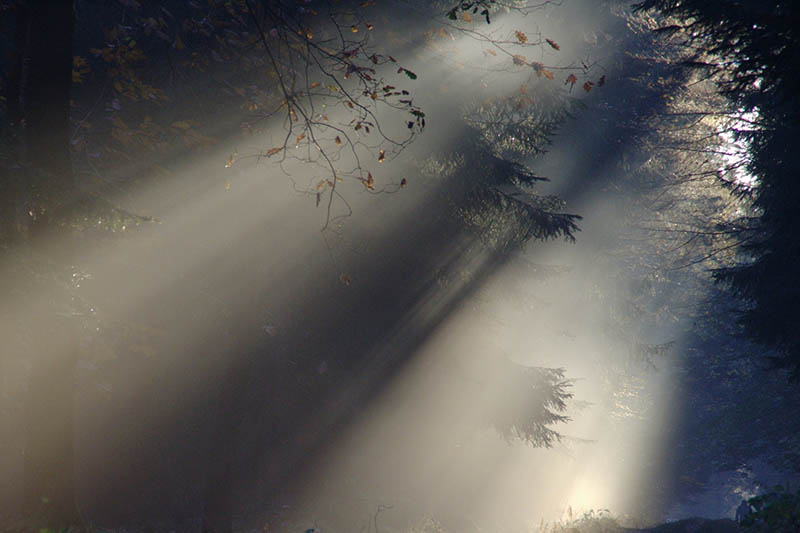 If you are no strangers to Hydroponics, you must have known that Hydroponics relies on water for growing plants.

In traditional Hydroponics, growers would submerge plant roots in the water with added nutrient. Yet as Hydroponics evolves, people have developed a kind of system where plants can be hung freely without direct access to the water and nutrient. They are sprayed and moistured with the misting nozzles.

That system is called Aeroponics. However, you don’t need to use just water mistings. One of the advanced forms of aeroponic is fogponics, which uses fog as the main growing environment.

Do you think plants can be grown with just Fog?

Definitely yes, that’s what I am going to share with you in this post – what it is, and how to grow plants with Fogponics.

Fogponics, or fog and ponics (labor) can be defined as working fog. In its simplest meaning, in fogponic system, growers use the fog to grow plants.

The fogponic system uses electric foggers to pump and vibrate under pressure to transform nutrient and water mix into humidity, like the humid atmosphere found in the rainforest. This creates a constant humid and nutrient-rich fog for plant roots

With fogponics, the root system can have a full coverage as the tiny droplet size of the gravity-defying fog can travel and penetrate all space around it.

How does it work?

Like any other active hydroponics system, plants are given with what they need, moisture, nutrients, oxygen. They do not have to actively seek for these like in the soil counterparts. All of their efforts are spent on growing, flowering, or sprouting (for seedlings), and root development (for cloning).

But unlike traditional Hydroponics, where plants get the oxygen from the water oxygenated by an air pump, Fogponics/Aeroponics works by hanging the plants in the air. It is held by a tray/foam. The plant roots are suspended, so they have plenty of oxygen access. Water is provided by plants via the foggers.
The action is usually automated by a timer.

Fogponics operates just like aeroponics. But instead using the water misting, the foggers are used.
They produce and atomize much smaller droplets than in aeroponics, usually less than 10 microns in size.

How to set up a Fogponic system?

You’ll need these tools to set up the system.

A container, a reservoir, a bucket or anything large enough that can hold water and at least 1 plant.

A lid. This will cover your reservoir and keep the fog from escaping. You’ll also need to drill some holes to place the net pot with the plants in it.

A net pot. Get the size you find fit with your system. Fill it with the growing media (hydroton, perlite, vermiculite). Place the net pot on the reservoir. It must be held by the lid or styrofoam so that when plants are put into the net pot, their roots are hung above the water of the reservoir.

Fogponic Hydroponic nutrient. Your plants do need nutrients, right? We recommend The liquid form as it works best in the fogponics system. You can also use the powder form, just make sure it is totally dissolved. Stay away from any organic nutrient form because it can clog your fogponic system. We prefer the 3-part General Hydroponics. After choosing the nutrients, Fill them in the reservoir.

The ultrasonic fogger (This is the most important apparatus as it decides whether you call it aeroponics or fogponics). Put it in the reservoir. Turn it on, and let the fog come out.

A micro fan (optional). You can place it above or below the root. Aim the fan at the direction that helps regulate the fog around the roots.

pH measurement tools. Get a pH meter to first check the pH of the system, and occasionally recheck it later.

A pH control kit. We prefer pH up and down. If the pH of our system is too low or too high, just add the appropriate pH control kit into it.

What Plants Work Best with the fogponics

In theory, you can grow all plants with the Fogponics, yet it’s advised that you choose appropriate plants for the best results.

There is an excellent reason why fogponics works absolutely well with seedlings and clonings. Young cloners from cuttings do not have a developed root systems yet, so it’s really difficult to moisture and provide nutrients to them. The amounts of water must be kept at an appropriate level. Because too much that can suffocate the cloning. Too little, or the roots may dry out, and sprouts will never spring up.

With the fogs emitted from the fogponics systems, growers provide a constant mix of small weak moisture for cloners at controlled amounts.

The fogponics also works best with green vegs, including lettuces, spinaches, kales, cucumbers, beans and so on.

Undoubtedly, most herbs like basil, mint, chives, etc thrive in the fogponic system as it is lightweight, and have a short growing life span.

Pros and Cons of a fogponic system

According to the NASA research – Aeroponics for Spaceflight Plant Growth by J.M. Clawson, A. Hoehn, L.S. Stodieck and P. Todd BioServe Space Technologies R.J. Stoner 2000, small droplets tend not to impinge on roots. That answers why aeroponics/fogponics is so effective for clonings because the cuttings, and seedlings are still weak, and these low-pressure fog will not hurt the cuttings and roots.

Also, the hanging roots will get more air than they could in the soil, and in traditional Hydroponic systems like Deep Water Culture, Nutrient Film Technique.

What’s more, Fogponics does not deliver much nutrient as the small-sized nature of the fog, which is very important for Seedlings as they do not need many nutrients.

Because of this, the nutrient concentration is not lost when traveling within the reservoir. To see how it is a benefit, let’s compare with a Hydroponic system, say the Nutrient Film Technique. In the NFT system, when the nutrient cycle comes and runs across the plant roots, those at the beginning of the tray will get the most nutrient, and it becomes less concentrated at the end of the water cycle.

The fogponics only has 1 unit to clean rather than lots of heads like in the Aeroponics.

Heats from the atomizer.

When running continuously for a long time, the atomizer will warm the reservoir. The heat can dry and evaporate the fogs. And your roots can dry out subsequently. If that happens, you need to the cool the temperature down. You can do this by getting a timer and set on and off interval for the foggers. Another way is using some chilling methods like adding some ices into it. If you have more money to spend, you can get a water chiller

Like the aeroponics system, over time you’ll see the salt accumulates in the system. This can clog the foggers. That means it’ll need regularly cleaning by using a toothbrush or soak them in vinegar to ensure the fogponics will run effectively.

As the advanced form of hydroponics, the fogponics relies on the electricity to run the whole system. Also, the plant’s roots are hung freely without submerging into the water like the traditional Hydroponic systems. In this sense, in case the electricity is off, the fog will stop. The plants will not able to get the moisture and nutrients. They will dry out fast and the death can be expected.

This advanced form of Hydroponics will cost you some start-up cost in the beginning.

Because of the heats and the risk of evaporation of the fog, you can use a small fan to regulate the fogs.

Occasionally check the nutrients to ensure the salt is not built up as it will hinder your plants’ development.

Most of the time, 1 single-node fogger is enough for starters. But when the sizes of your gardens extend, you’ll need to get more.

When growing with seedling/cloners. As plants do not need not a large amount of nutrients at this phase, don’t add many nutrients into the reservoir.

Even though there are some hurdles like some startup cost, regular maintenance, risks from the system interruptions, etc, Fogponics is still a very effective Hydroponic system.

It is fairly interesting to try for Hydroponic starters and hobbyists.

In commercial greenhouses, growers have used aerponics/fogponics for growing plants for years but they will use more expensive misting and foggers for better fog production instead of the common cheap ultrasonic foggers. 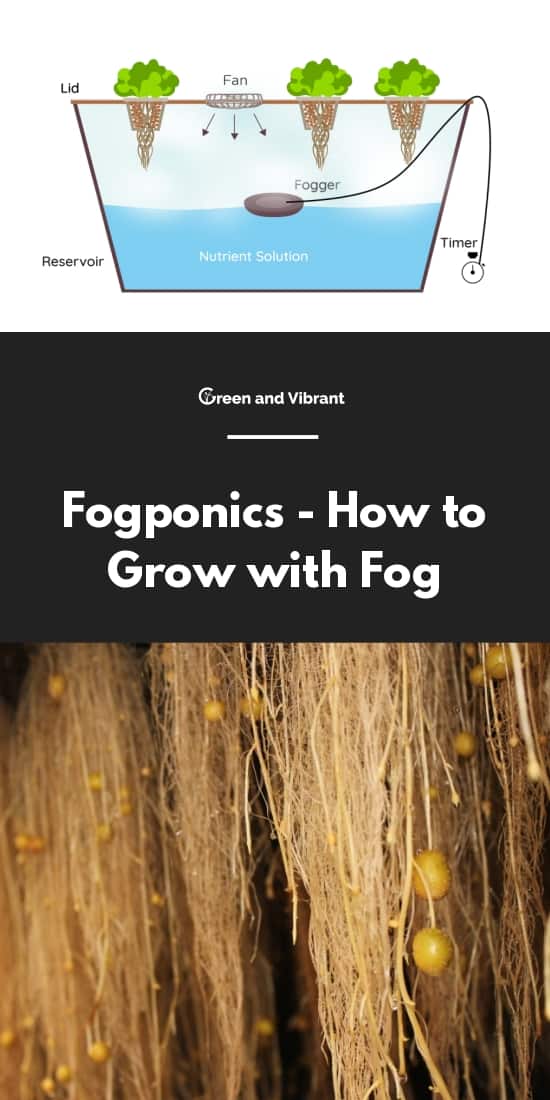