Coffee Grounds for Gardening – Pros, Cons, and How to Use Them 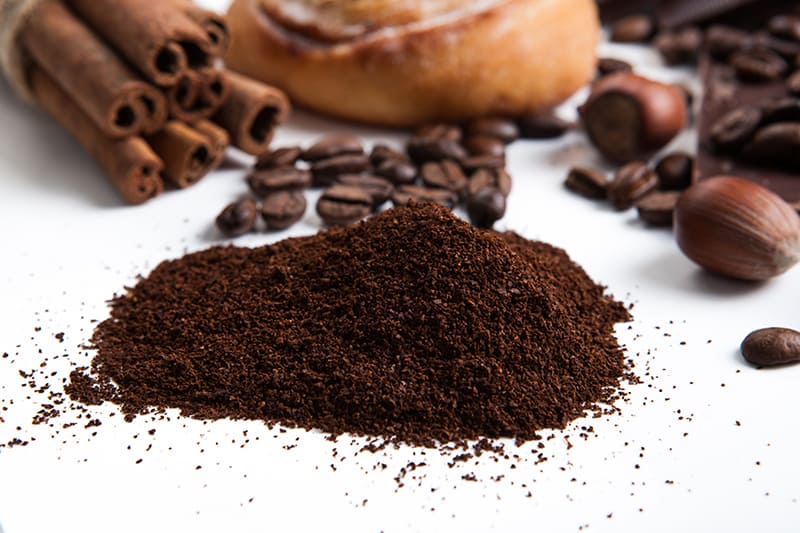 Coffee grounds are often used to remove odors, prevent insects & pests, and scrub the body. But did you know that gardeners also use the waste of the coffee to fertilize the garden, improve the soil quality, and so on?

But some don’t recommend them for gardening for some downsides of coffee grounds. So keep reading to learn into details about the coffee grounds and how to use them properly in the garden.

What are Coffee Grounds, and How Can They be Used in Gardening?

Coffee grounds are the waste that results from preparing or brewing coffee. Many coffee shops have huge amounts of coffee grounds going in the waste, which they will often happily give to customers for free to be used in their gardens.

Gardeners can use coffee grounds in a range of ways in the garden. They can be successfully used to improve soil quality, fertilize plants, and deter pests. However, there are some drawbacks to using coffee grounds in the garden, and some instances where they should be avoided. To learn how you can make use of this organic material that would otherwise be wasted, read on.

Pros and Cons of Using Coffee Grounds for Plants

Used coffee grounds are a free organic material, and so if you want to amend your soil to help improve soil quality, then adding in a few cups of grounds every now and again can be a good way to do this. By increasing the amount of organic material in your soil, drainage will be improved, which helps to ensure that water does not sit around the roots of plants and cause rotting.

Every gardener knows that good drainage is essential for the health of most plants, so there’s no reason not to use your coffee grounds for this purpose when they might otherwise end up in the garbage. The one rule with adding coffee grounds to improve drainage is to make sure you mix it in well with the soil. Coffee grounds are made from very small particles that can become compacted if they are not mixed well with other materials, which will actually create barriers similar to a clay type soil that is the exact opposite of what you are trying to achieve.

Helps to aerate the soil

Similar to how adding coffee grounds to the soil will improve drainage, it will also help to aerate the soil. This is because amending the soil with any organic matter will help to improve aeration, thereby allowing roots to better absorb moisture and nutrients, and helping with the overall health of the plant.

Amending your soil with coffee grounds will also improve water retention, as it is a type of organic matter that will improve the overall health of the soil, including its ability to retain water. This will especially help plants that like to grow in moist soil, as after rain or watering, the soil will remain moist for longer. A soil that retains water well will also need to be watered less frequently, which can reduce water bills and conserve energy.

Coffee grounds can be added to compost as green waste (despite the fact that it is brown in color!) Coffee grounds contain reasonable levels of nitrogen, which will break down and create a compost that is high in essential nutrients. Nitrogen helps to encourage lush leafy growth, so using a compost containing coffee grounds amongst your plants will promote foliage health.

Can Deter Slugs and Snails from Plants

Many people claim that used coffee grounds act as a deterrent against slugs and snails. These nasty pests are a common problem for gardeners, as they feed on foliage that can look unsightly and, in some cases, even cause the decline and deterioration of plants. It is thought that the smell and taste of the coffee grounds deter these pests, and also that the grainy texture can act as a physical barrier that slugs and snails do not want to cross.

Can Act as a Cat Repellant

If you have a problem with cats spraying or pooping in your garden, you’re not alone. Cats commonly use gardens as litter trays, as they seem to enjoy defecating on soil, mulch, and gravel. This can be a very unpleasant problem that many gardeners battle with, and it is incredibly frustrating to find the garden you have spent time nurturing to be overrun with cat feces. It’s a very serious problem if you have children, as cat droppings and urine contain elements that can be very harmful if touched or ingested by humans, and it can even cause blindness.

To try to combat a cat problem, pour your coffee grounds in small piles around your plants, or mix it into the top layer of your soil. The small is believed to deter cats, though it may need to be used in conjunction with other preventative methods if you have a severe cat problem. Ensure you don’t create a carpet of coffee grounds, as this can block the soil from getting moisture.

Coffee grounds are reportedly a popular choice of food for worms, so using them in your soil or in your compost can increase the worm population. A good worm population in your garden is vital for plant root health, and also in the breaking down of compost. Vermicomposters report that their worms love to feast on coffee grounds, so adding this green material routinely to your compost will keep the worms happy and working away.

Can be Used as a Mulch

Coffee grounds can be mixed with other organic materials, such as shredded leaves, and used as mulch. When layered over the top of the soil around plants, this can help to prevent moisture from evaporating from the soil, as well as helping the soil to retain heat in the winter and keep cool in the summer.

Mulching over your soil can also inhibit weed growth. Weed seeds will not be able to access soil as easily as the mulch acts as a physical barrier, and it also prevents light from getting through to the soil, which will prevent many types of weeds from germinating. If you do want to use coffee grounds as mulch, you should always mix it with another organic material because if used alone, the small particles can become compacted and prevent water from getting through to the soil.

Works as a Slow Release Fertilizer 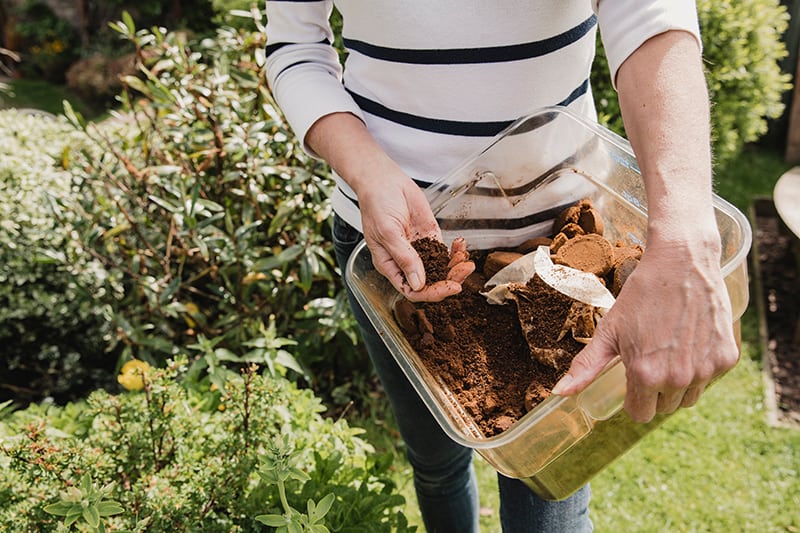 Amending your soil with coffee grounds will introduce slow-release nutrients, thereby making it an effective fertilizer. Used coffee grounds contain a good amount of nitrogen,  low levels of phosphorus and potassium, and some other micronutrients. These are all nutrients that are essential to plant health, so introducing them to your soil will be beneficial. They won’t be immediately available to the plant’s roots and will be released slowly during the breakdown cycle of the grounds, making them great as a gradual fertilizer.

Reduces Waste and Reduces Chemical Use

Coffee grounds are a waste item, which, if not put to good use, will typically end up in the garbage can, and ultimately in a landfill. Recycling or reusing any item is a great way to make a positive impact on the earth and on the environment. Coffee grounds are an organic material that, when reused, can be considered as an eco-friendly choice.

If you use coffee grounds as a fertilizer instead of a synthetic fertilizer, you will also be reducing the number of chemicals being put into the earth and contributing to a more organic and natural landscape while protecting local waterways and the delicate balance of the ecosystem.

Can Form Dense Barrier over Soil

Coffee grounds are composed of very small particles that can easily become compacted together when they dry out, forming a solid barrier. If you use neat coffee grounds, for example, as a mulch or top dressing, then you will be creating something with a texture similar to clay soil, which is obviously bad news for plants. A physical barrier over the top of your soil that is impenetrable by water will result in your plants dying from thirst.

May Be Harmful to Dogs in Large Quantities

If you have a canine friend who curiously tastes anything that takes his interest, then you might want to avoid laying coffee grounds around your plants. If ingested, coffee grounds can be toxic to dogs. A fairly large quantity would need to be consumed to result in fatalities, but even so, it is probably not worth the risk of harming your pet.

Caffeine can inhibit seedlings from growing, and in fact, this is one of the components of coffee plants-that they grow well because the caffeine they contain prevents nearby competition from thriving. Therefore, if you are growing seeds or young plants, you should avoid having coffee grounds anywhere near them. They can destroy their roots and lead to the quick demise of the plant before it has even had a chance.

Just like how caffeine can inhibit seedlings from becoming established, caffeine can also have negative effects on mature plants. It can restrict root growth and cause the plant to become stunted. Coffee grounds are less likely to be harmful to mature plants compared to seedlings, but it is still worth considering if you don’t want to risk the health of a plant you are particularly fond of.

Coffee has antibacterial properties. While in general life, this is considered to be an advantage, when it comes to soil health, this can actually cause big problems. There are many different types of good bacteria living in soil, which keep pests and disease in check. By introducing a material that is antibacterial, you will kill all of the good bacteria that will make the soil vulnerable to pests and disease in the future. The destruction of good bacteria will also alter the natural biodiversity of the soil, which can cause all sorts of problems for earthworms and other creatures residing in your soil.

May Kill Off Earthworms in Compost

Some composters attest to their worms loving coffee grounds to feast on, but this is a contested issue as some studies show that using coffee grounds in compost can actually kill off earthworms and reduce the overall worm population in compost. Worms are vital in breaking down compost and helping it to decompose, so diminishing the worm population would certainly be a bad thing to do. More research needs to be done on this topic to find a definitive conclusion.

Used Coffee Grounds are Not Acidic

Using fresh coffee grounds on the soil will also not help because the acid in coffee is water-soluble, so as soon as it rains, any acidic content held in the grounds will be washed away. Using any type of coffee grounds in the soil as an attempt to alter its pH is a waste of time and a waste of good coffee!

How to Use Coffee Grounds for Plants

If you make filtered coffee at home, then you likely have plenty of coffee grounds going to waste each day. Use a large tub or a bucket in your kitchen to empty your grounds into, and at the end of each week, you can use it to benefit your garden. Note that if you make instant coffee, then you won’t have any grounds leftover, which is a great reason to move over to filtered coffee (plus the great taste!), or you could ask a neighbor or local coffee shop for their used grounds.

To use coffee grounds in your garden, always mix them well, whether that be mixing them in with your existing soil or with another organic matter such as lawn clippings or shredded leaves to make a mulch.