Chelated Iron for Plants – What You Need to Know 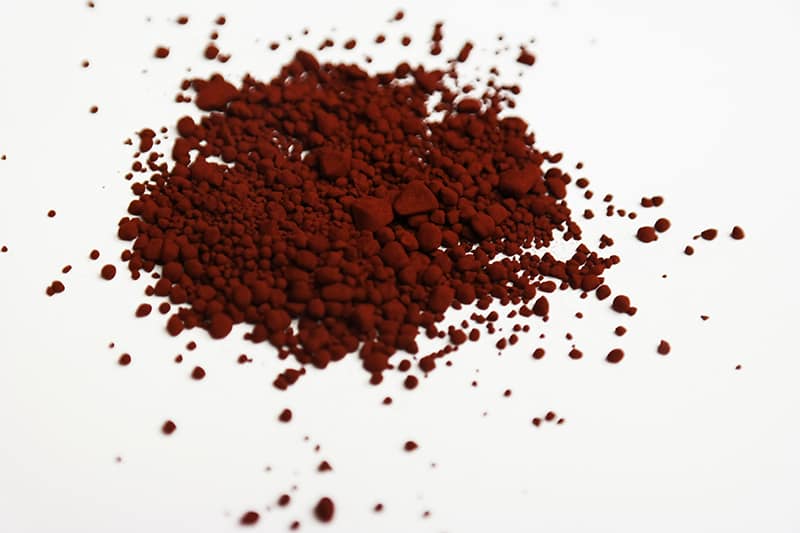 If you’ve ever noticed chelated iron being sold at your local plant nursery or hardware store, you may have wondered what it is for, or how it differs from regular iron supplements. Chelated iron can be bought in various forms, as well as included in fertilizers or other mixes of plant nutrients. But how can chelated iron help your plants, how does it work, and how do you use it? Let’s explore everything the home gardener needs to know about chelated iron…

What Is Chelated Iron?

Chelated iron is an iron supplement for plants, which is treated with a chelator to ensure the iron remains in a form that can be absorbed by the plant. It was created as a solution for plants suffering from iron chlorosis, a type of iron deficiency where the plants are unable to absorb the iron nutrients from the soil.

When Do You Need Chelated Iron?

As a gardener, you will probably already be aware of a plant’s nutritional needs, such as its need for nitrogen, potassium, and phosphorus, as well as micronutrients like magnesium and iron, which enable it to grow successfully. The role of iron in plants is vital, as it helps to ensure chlorophyll function and development, without which, the foliage of a plant loses its healthy green color.

Iron also is involved with nitrogen fixation, energy transfer, and plant metabolism and respiration. If a plant is deficient in iron, then it is likely to start encountering problems. In general, we don’t tend to provide plants with iron supplements because the soil is typically very high in iron, so plants will be able to fulfill all of their iron nutrient requirements from their soil. However, there are certain circumstances that will lead to iron deficiency in a plant, and in this case, supplying chelated iron is the best solution.

What Causes Iron Deficiency in Plants?

Almost all soils have naturally high iron levels, so you may be confused if your plants start exhibiting signs of iron deficiency. For most iron-deficient plants, it is not actually a lack of iron in the soil that is the problem, but instead, it is a problem with the plant’s ability to actually absorb the iron. There are various things that can cause this, but these are the most common.

If your soil is alkaline with a pH of higher than 6.5, then it is more likely that iron will not be available to the plant’s roots for absorption. Iron is a metal ion, and when exposed to high pH levels, it causes a reaction that makes the iron bind to other ions, such as calcium carbonate. These ions become solid in these conditions, meaning they cannot be absorbed by the plant. They can often be seen in the soil as solid pale-colored lumps, ranging in size from one inch across to several feet.

If you spot these calcium carbonate deposits in your soil, it’s a good indication that your soil pH is too high. The best way to correct this and prevent it from recurring in the future is to adjust the pH level of your soil, increasing its acidity. One recommended way of doing this is to mix sulfur into the soil. In some instances, this may be successful, but changing soil pH over the long term is often a struggle. It can also be impractical to mix sulfur into the soil if you have well-established plants, which you understandably don’t want to disturb.

Iron can get leached from the soil when conditions are not ideal, for example, in overly wet soil. If the soil has too much moisture content, the water can drain away the iron, making it unavailable to a plant’s root system. Poor soils also inhibit iron’s ability to be absorbed, including clay soils and highly compacted soils.

Symptoms of Iron Deficiency in Plants 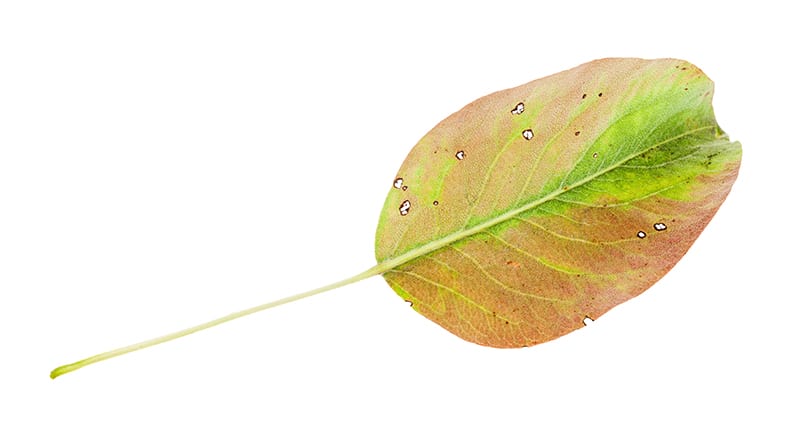 Iron deficiency in plants presents itself as mottled, yellowing leaves. Most typically, the younger leaves will be affected first, with symptoms then spreading to the remainder of the plant. The foliage of an iron-deficient plant will have green veins, and patchy yellow leaves that can appear as a mottled, lacy, or spotted pattern.

As time progresses, the entire leaf will become pale and die. In some plants, the discolored leaves will be the only indication that there is a problem, but for others, further problems can develop, including stunted growth, dropping fruit, and an inability to form flowers.

If you suspect an iron deficiency in your plant, you can get the soil tested to get a definitive answer. Some plants are more susceptible to iron deficiencies than others. In some instances, it’s possible to have two plants growing directly next to each other in the same iron-deficient soil, with one plant showing many symptoms of iron deficiency, while the other is growing perfectly well. This is simply due to the biology of the individual plant and its ability to absorb and use iron.

Plants that are notorious for struggling with iron deficiencies are rhododendrons, azaleas, blueberries, citrus, roses, and gardenias. If you have a known iron problem in your soil, you can opt to plant specimens that are unlikely to suffer from iron deficiencies. These plants include yucca, cactus, acacia, and agave ( The University of Arizona Cooperative Extension).

How Does Chelated Iron Work?

You may think that using a fertilizer high in iron will be the solution for your iron-deficient plants, but in fact, if your soil has a high pH then an increase of iron will not make any difference and will just cause more lumps of solid deposits in your soil. Iron precipitates, reacting with both oxygen and hydrogen, whereas chelated iron is treated to prevent this from happening.

Chelated iron has ferric chelators added, which are tiny binding molecules that wrap themselves around the iron ions to prevent them from being able to precipitate. This ensures that the iron added to the plants is available for absorption and won’t turn to a solid even when exposed to high soil pH levels. The word ‘chelate’ is actually derived from the Latin term ‘chele,’ which translates roughly to ‘lobster claw.’ This gives us a good mental image of how the chelates work, clasping on to the ions like a lobster claw, ensuring they don’t escape and can instead be utilized by the plants.

Some plants have their own chelation system, and it is these plants that are much less likely to succumb to iron deficiency. The root systems of some plants, such as grassy plants, release exudates into the soil, and these contain naturally occurring chelates. The chelates work as a carrier to allow the iron to be absorbed by the plant’s roots, even in alkaline soil. In plants where chelates are not naturally released, chelated iron can be used as a supplement to treat and prevent iron deficiencies ( University of Florida Cooperative Extension).

How to Use Chelated Iron

Chelated iron can be bought in several forms: granules, pellets, spikes, and powders. Granules and powders are water-soluble and can be mixed into water to create foliar sprays. Spray these liberally on the foliage of the entire affected plant. In many cases, the leaves showing signs of iron deficiency will improve and return to their green and healthy-looking state, having been enabled to form chlorophyll by the chelated iron application. 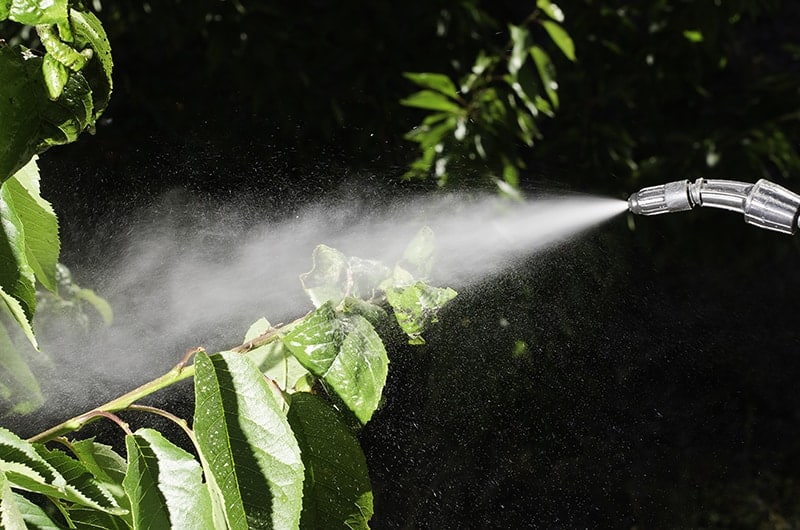 There are different strengths of chelated iron, but when it is used as a foliar spray, the strength is unimportant, so don’t feel the need to buy the most expensive product because the cheapest one will likely perform equally well. Always spray the foliage when the temperature is cool to prevent burn and tissue damage of the leaves. Though chelated iron foliar sprays are highly effective on symptomatic leaves, it will not ordinarily make a difference to leaves, which have yet to develop because the sprayed iron will not travel throughout the plant.

New leaves that appear after the foliar spray has been applied will likely continue to show signs of iron deficiency unless the soil has also been treated. Because of this, foliar sprays do not represent a long-term solution and may need to be reapplied often. Pellets and spikes can be applied directly to the soil, which will offer a longer-lasting solution.

These products can be worked into the top few inches of the soil surrounding affected plants. If working pellets into the soil is not an option, in the instance of well-established shrubs or plants where you cannot physically work on the soil, you can instead make a soil drench with water-soluble chelated iron. This may need to be repeated every few months, but it will have a greater effect on the plant as the iron can be absorbed through roots and delivered to the whole plant.

The chelated iron found in horticultural products is manmade. However, natural chelators are found in organic matter. Increasing the organic content of your soil will also help your plant’s ability to absorb iron, and may have a longer term effect than using foliar sprays or soil supplements.

How to Make Chelated Iron

Chelated iron is made by adding agents to the iron, which binds it and prevents the iron from precipitating out. Various man-made elements are used as chelates in this process, and the element used affects how potent the resulting chelated iron will be.

When Ethylenediaminetetraacetic acid (EDTA) is used as a chelate with iron, it produces a low strength chelated iron, which is suitable for correcting iron deficiencies in soils where the pH is lower than 6.5.

For more alkaline soils, where pH is around 7.0, then diethylenetriaminepentaacetic acid (DTPA) is an appropriate chelator. This produces a mid-strength chelated iron, which will lose around 60% of its strength when used in soils that have a pH of 8.0 or higher.

In soils with a very high pH, the most effective chelated iron will be that produced with Ethylenediamine di (o-hydroxyphenylacetic acid) (EDDHA). This results in the highest strength of chelated iron, which will be able to correct iron deficiency problems in plants growing in soils of 9.0 pH and higher.

The greater the strength of the chelated iron, the more expensive it will be to buy, though you should only need to use a very small amount at a time. For foliar sprays, opt for the lowest strength or least expensive, as the pH level will not affect the absorbency of the iron on the foliage of plants.

Chelated iron is essentially regular iron, which is treated with a man-made chelator, an element that ensures the iron remains in an absorbable form so that plants can soak it up. Chelated iron can be bought in various forms to improve iron deficiency in plants, including water-soluble formats to create foliar sprays, or pellets to add to the soil.

You can also encourage iron to bond with naturally occurring chelates in your soil with the addition of organic mulches and composts. Chelated iron can save plants on the brink of demise by supplying them with iron they can use, but it is not a long term solution for iron deficiency, and as well as using chelated iron, you should also seek to correct the pH of your soil by increasing its acidity and therefore enabling its natural iron content to be available for your plants.