Squash Bugs (Anasa Tristis) – How to Get Rid of Them

Can you picture a proper end-of-autumn celebration without squash and pumpkins? Whether your jam is a full-blown Halloween bash or a pumpkin-pie feast for the entire family, squash, pumpkins and gourds can make or break your October – which means that letting squash bugs take a foothold inside your property can literally wilt your season.

Squash bugs are a highly-seasonal but very widespread pest, and they can quickly suck the life out of your plants. Learn how to get rid of them, how to recognize them, and how to prevent their appearance altogether.

Where Do Squash Bugs Come From?

Squash bugs are believed to have crawled their way north from Central America, where most squash varieties also come from. As their favorite food has spread out across most warm and temperate parts of continental North America, squash bugs have found an opportunity to expand their home. Whether hidden in cuttings or unknowingly carried off by other animals, squash bug infestations have been confirmed as far north as Alberta and Nova Scotia to the north, and in almost every American state with the exception of Washington, Oregon, and Hawaii.

Traditionally, they are only considered a year-round problem in Mexico and the Southern United States. However, increased land trade and climate change have been progressively expanding their comfort zone over the last few decades. 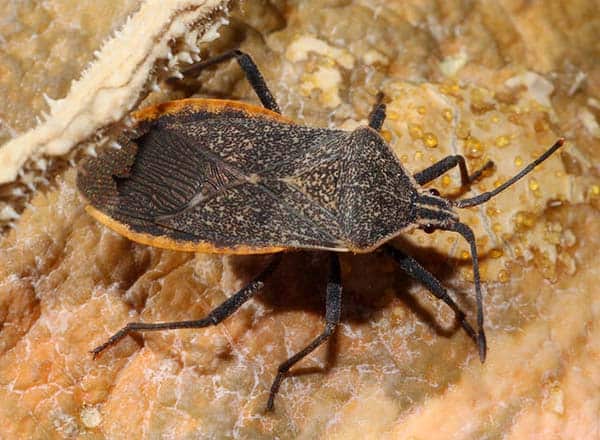 At first glance, squash bugs are quite similar to both stink bugs and squash vine borers, as they are also grey and winged. They can grow up to half an inch long, which is just large enough to sport them at plain sight. However, in order to get a good look at the brown, orange or yellow stripes on their underside, you may need to get a closer look.

Just like stink bugs, squash bugs will emit a strong and unpleasant odor when crushed.

While adult squash bugs are easy to spot, they can be notoriously easier to miss when in their nymph stage. These are much smaller and usually lighter in colors, ranging from a greyish white to a very light green. They also lack wings, and are often mistaken for tiny spiders. 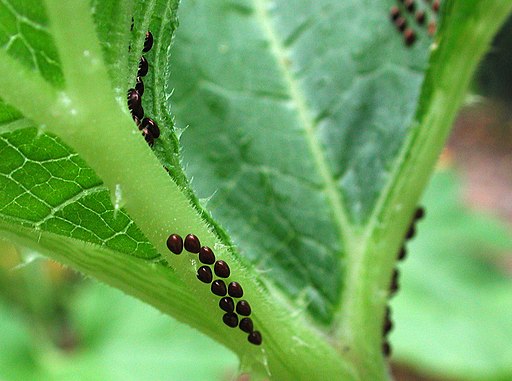 Squash bug eggs are tiny, oval, and remarkably orderly. Females usually lay them underneath stems or hidden on the underside of leaves, in clusters of up to 40 eggs at once. They usually appear very neatly aligned, in three or four consecutive lines.

There are no subspecies or subtypes of Anasa tristis or squash bugs.

Although there are some types of bugs that can be easily confused with them, or who have similar names, they all belong to distinct families and will require their own distinct strategies to fight them (Source).

Squash vine borers are borers, not true bugs, and while fond of the same plants, they will eat their leaves directly rather than seek the sap. 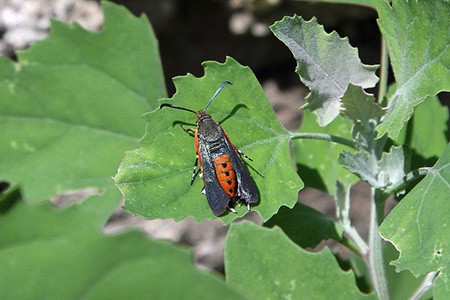 Stink bugs are physically similar, and they also smell alike when manually killed. However, they have the ability to secrete the same smell when feeling attacked. They also tend to favor nightshades (tomatoes and peppers) and legumes rather than gourds (University of California Integrated Pest Management Program). 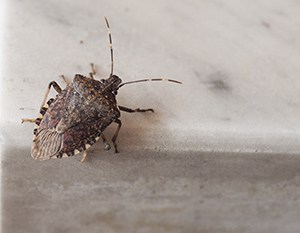 Squash bugs are seasonal, thanks to their little-known ability to fly off or hide under a rock during the winter.

Their life cycle usually takes about five to eight weeks. After waking up, usually around early June, squash bugs start laying their eggs, which will then take about ten days to hatch.

Afterwards, nymphs (or baby, wingless squash bugs) will take between four to six weeks before becoming full grown adults and being ready to begin reproducing themselves. As soon as they do, they will begin laying eggs continuously, until it’s time to disappear again for the winter.

As temperatures drop and approach the freezing point, adult squash bugs will either hide under mulch or debris, under rocks, or even fly off South to escape the cold – while those who have not made it out of nymph stage by the first frost will usually die.

This means that, depending on the length of the summer, each year may bring about up to two full generations of bugs. (Source)

Squash bugs have proven fond of nearly all members of the Cucurbitaceae family, also known as the gourd or squash family. This includes proper squash as well as pumpkins, zucchinis, and cucumbers (University of Florida).

That being said, they are not likely to feed off the squash itself. Instead, they use their piercing mouths to draw holes in the stems and leaves, perforating the epidermis, in order to suck the plant’s sap. By doing so, they are reaching directly into the plant’s version of its bloodstream – think of a plant mosquito, minus the buzzing and the dengue.

Some entomologists believe that squash bugs inject some sort of toxin into the plant while feeding, in the same way as mosquitoes drop a bit of saliva that causes their dreaded itchy bumps (Penn State).

However, they are still not 100% sure of this, and in any case, no toxin is needed to ruin the plant: just by eating off its nutrients, they can basically starve it out. The squash plant will then become stunted, unable to grow its fruit, or even die out.

As they have broken through the plant’s epidermis, these holes can later become weak spots from which viruses or fungi can enter the plant’s sap stream.

Unlike cucumber beetles, squash bugs don’t carry any disease or virus by themselves, but they do provide an entrance for opportunistic infections. In addition, if damage to a certain leaf or vine has been extensive, the entire branch may also turn black and die. This is often confused for an infection known as bacterial wilt.

Squash bugs are terribly hardy, but they are not impossible to fight. However, just like most other pests, they are significantly easier and cheaper to prevent than to kill off – especially if you are committed to avoiding chemical pesticides and want to keep your home garden completely kid-friendly.

The top prevention strategies that you can use include:

Good old-fashion physical barriers: a tent or a floating barrier can prevent adult squash bugs from flying into your plant

Sanitation for all new plants: Inspect each new cutting that comes to your garden, and set up a period of quarantine for any gifted seedlings.

Plant some catnip: Despite being quite malodorous themselves, squash bugs are not too fond of catnip. Keep a couple of catnip bushes around your pumpkin patch to keep squash bugs away. If you’d rather keep the town’s cats away, try spearmint or dill instead.

Spring cleaning: One of the reasons why squash bugs are so pervasive is that they can hide every winter. Make sure to move any stones and get rid of all mulch before the summer kicks in and they have the chance to repopulate your yard.

Crop rotation: If possible, try switching around the placement of pumpkin or squash patches from year to year. Just make sure to leave last year’s mulch and leaves behind!

These methods are a bit more labor intensive than spraying, but they are also safer for your family, pets, and ecosystem:

Hand picking. If prevention measures fail and you spot one lone squash bug creeping around your vines, don’t delay: visually inspect all your plants and manually pick off all the eggs.

Traps. This strategy works best during early to mid-spring, when squash bugs are more likely to seek overnight shelter:

1. Place a few wooden boards or planks around your squash or pumpkin plants

2. Wait until late at night (or before the crack of dawn)

3. Turn over the planks and immediately crush all the bugs that have hidden beneath them

Set a hen on them. Sometimes, you want some full-time mobile help that can chase around full-grown bugs all the time. Guinea hens are chicken are both fond of these bugs.

In addition, the Trees.com Philosophy always includes some natural allies:

Ladybugs. These are a great way to fight off a variety of potentially invasive pests. They are also easy to attract (or to buy), non-toxic, and quite nice to look at.

Praying mantises. Much more voracious than ladybugs, they can make for a much more aggressive army against squash bugs – and will also hunt cucumber beetles and squash vine borers. Unfortunately, they’re not exactly team players: if you already have some praying mantises hanging around your garden, it’s best to avoid buying ant ladybugs.

Tachynid flies. Also known as Trichopoda pennipes by the nerds among us, these flies are a great way to target squash bugs directly. They are fond of using squash bugs to lay their eggs on, and once their larvae hatch, they will literally feed off their backs. Keep them extra happy by placing a few dill plants in the area

Squash bugs are quite good at hiding behind leaves and twigs, which makes most sprayed insecticides ineffective when dealing with the fully-grown bugs. However, there are other methods available:

Washing leaves. This can be done with a homemade insecticide soap. However, while very effective against nymphs and eggs, it will do little to adult squash bugs. Nevertheless, a quick wash can be very useful if done alongside a through visual inspection. If you find any adult bugs during it, you can pick them off manually. For best results, this should be done every three days, for two weeks, after initially sighting the bugs or their damage

Sabadilla or sapodilla. Sabadilla (Schoenocaulon officinale) is a tall grass native to most of Central and South America. Its crushed seeds have proven remarkably innocuous for humans and mammals, but toxic for many bugs – including squash bugs, stink bugs, and chinch bugs. It works on contact with the bugs’ exoskeleton (in a similar way that borax does with ants), and it will also poison them if ingested (Journal of Economic Entomology)

Neem oil. Neem oil is a great all-in-one solution, as long as there are no pets in your home or around your greenhouse – it can be quite toxic to dogs. In addition to fighting squash bugs and cucumber beetles, it will also keep most types of mites and borers away from your plants. Ladybugs, however, are not too fond of it either (Source)

Squash bugs are resilient enough that they have proven to be an economic liability, as they can quickly destroy a very valuable crop if left to thrive. For those of us who tend to our gardens and greenhouse as a hobby, they can prove even harder to deal with. After all, the goal is to keep our gardens pleasant and relaxing, rather than see them turn into an extra source of stress.

Fighting squash bugs requires patience and thoroughness, but when the time comes to share a truly homemade pumpkin pie, it will prove to be well worth the effort. 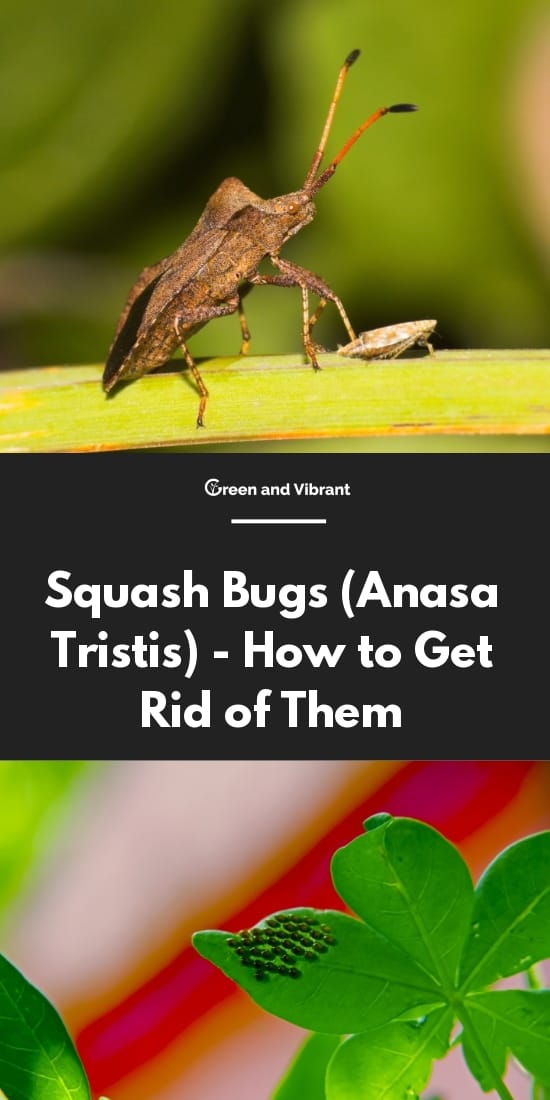